A family holiday in San Francisco gave me the excuse to put down my binoculars and camera for a short while and broaden my range of interest. From a focus on the wild-side, I turned to a fascination for incarceration. Actually, Alcatraz was a treat for my son who has developed an interest after an Alcatraz-based zombie computer game found its way into his hands. Thus, an early start found us on the ferry across to “The Rock”. 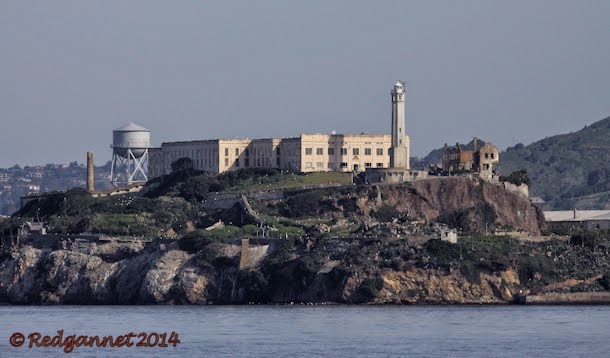 Since this is a bird-based blog and not a zombie shoot ‘em up, I will concentrate on the outside of the prison. After all, I had brought my camera, “just in case”. Most information sites mention that the island is a protected area and go on to highlight a few bird species that breed on Alcatraz; Western Gull, Brandt’s Cormorant, Snowy Egret, Black-crowned Night-heron and Pigeon Guillemot. All were easy to find and each showed evidence of imminent breeding. 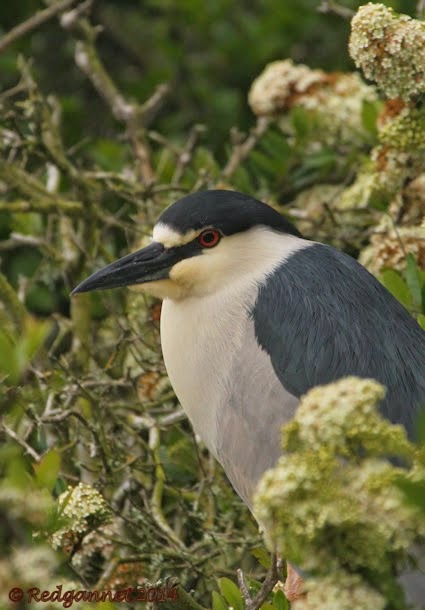 A formation of Brown Pelicans flew across the bay as we walked along Fisherman’s Wharf towards Pier 33, boarding point for the Alcatraz ferry service. Western Gulls were extremely common, to the exclusion of all other gulls as far as I could see. 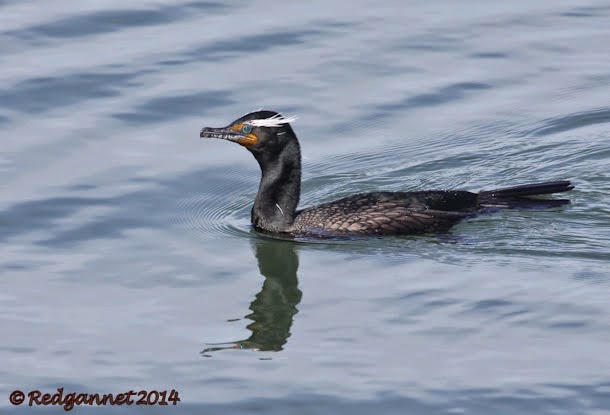 A few Double-crested Cormorants and Western Grebes were seen on the ride out and Pigeon Guillemots swam around the landing stages when we arrived. 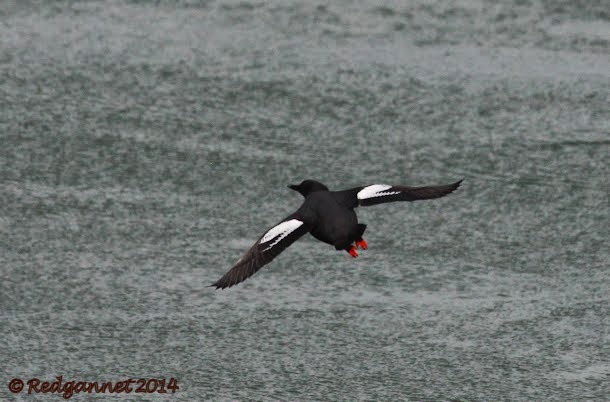 The prison was closed down in 1963 and has provided a safe breeding place for birds ever since. It was named island “de los Alcatraces” in 1775 by Spanish explorer Lt. Juan Manuel de Ayala for the large numbers of seabirds breeding there, but it is commonly thought that he was referring to the Western Gulls rather than the gannets that are a better translation, or the pelicans preferred by some. 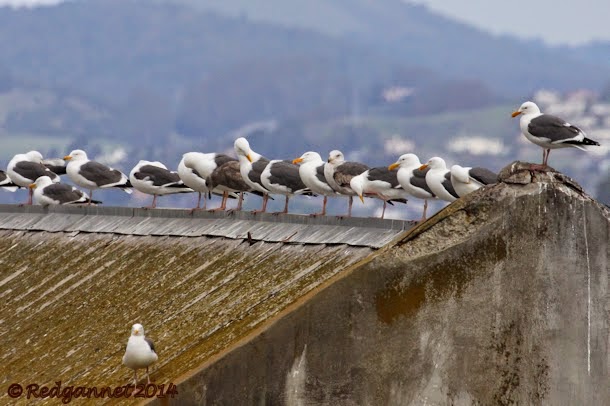 Western Gulls are still prolific on the island. They could be seen along the roof and many were seen on the rubble fields that used to be the officers’ housing and parade ground. 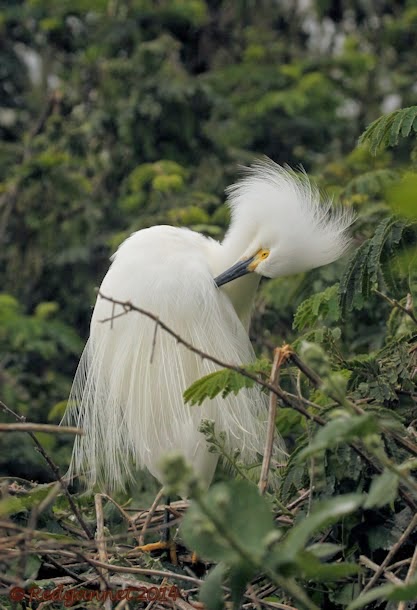 A path runs down the side of the island that looks back towards the city. Along here, a heronry holds Black-crowned Night Heron and breeding Snowy Egrets.
Geranium, or is that pelargonium flowers, attracted Anna’s Hummingbirds. 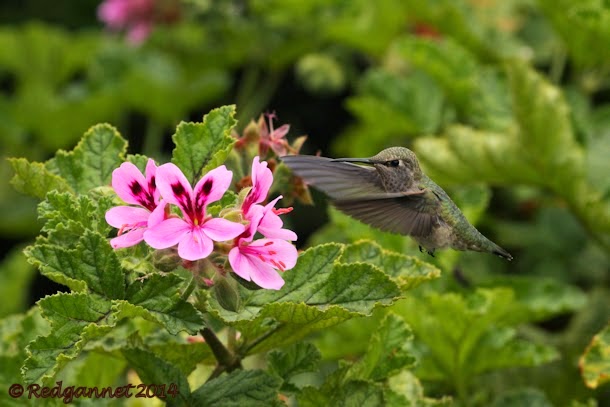 A flat gravelly expanse at the bottom of the slope serves as a nesting area for the Brandt’s Cormorants which were displaying their white dorsal and neck plumes and showing off with their blue skinned throats.
From the island, there is a good view of the waters of the bay. 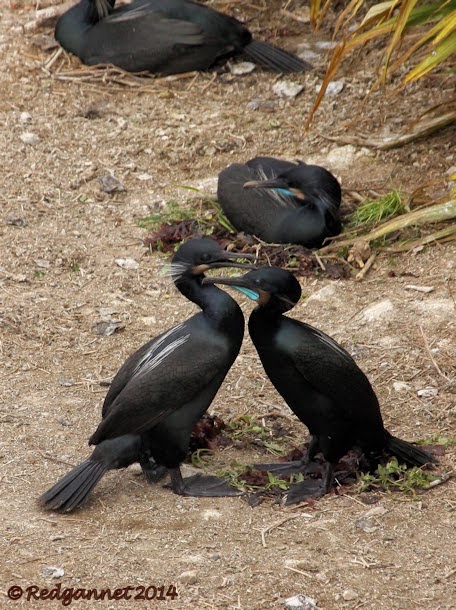 Surf Scoters were seen towards the Golden Gate Bridge, but for the bridge itself, we had to wait for better viewing conditions. A large number (perhaps 150+) of Western/Clark’s Grebes were seen. They were loosely associated rather than flocked together, but I was unable to establish which species I was looking at from the distance. Both species are common on the bay, so quite possibly both species were represented here. 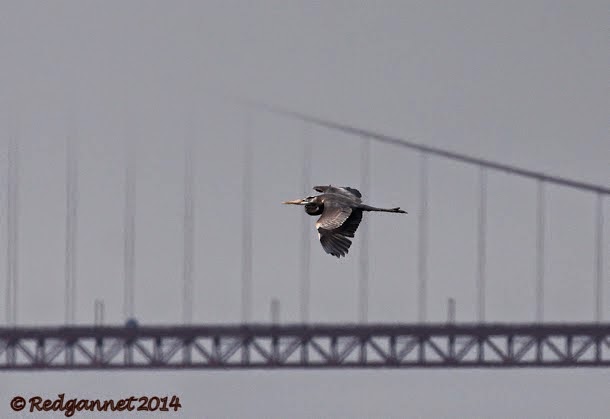 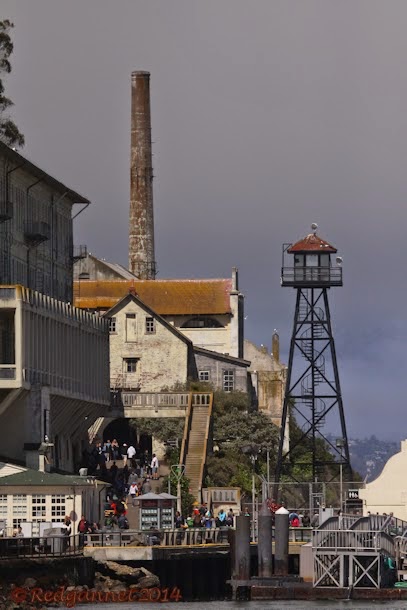 Alcatraz can only be accessed through Alcatraz Cruises. Tickets cost $30 as at April 2014.
Departures from Pier 33 run every 30 minutes from the “early bird” sailing at 08.45. The last outbound ferry sails at 15.50 with the final return trip at 18.30. Visitors can return to the mainland on any ferry.

Visit the dedicated USA and Canadapage for more posts from San Francisco, including; Golden Gate Park, Sutro Baths and the Nudist Beach.