The Boyce Thompson Arboretum is situated about 45 miles west from Phoenix on Highway 60 towards Globe, just before Superior. It is a delightful place to spend some time with spectacular scenery and a superb collection of plants from desert regions of the world. eBird’s Hotspot Explorer gives a list of 249 species seen at the arboretum from 1085 checklists submitted, so my list of 27 seems paltry in comparison.
During the winter they do not open the gates until 08.00, so I had managed to use up the remainder of my “Tonto Pass” at Coon Bluff to while away the early hours. 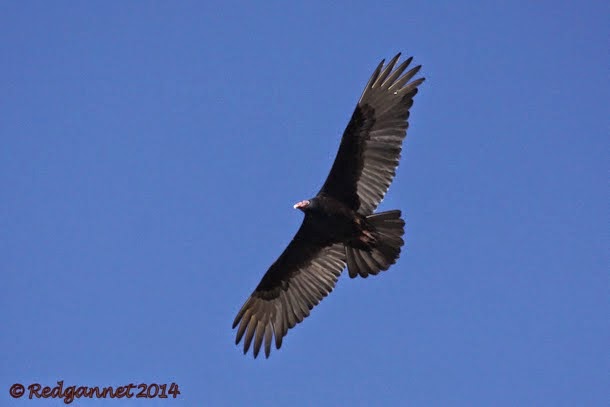 My first job was to check out the Turkey Vultures. There was a great many of them circling even at this time and there was a chance that I might find a Zone-tailed Hawk amongst them.
Not this morning, but the grapevine carried news of a Broad-billed Hummingbird to keep a look out for. The main trail describes a loop around an outcrop of rock and I was advised to follow the trail in a clock-wise fashion from the hummingbird feeder at Google Earth ref; 33 16 46.38N 111 9 30.42W. The whole circuit was probably less than a mile and a half. 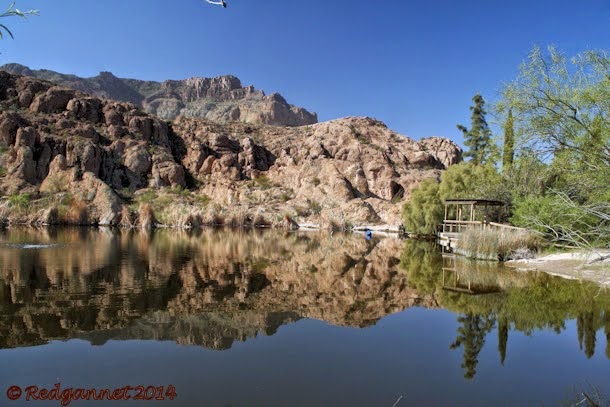 It took me up towards the lake where a pair of Pied-billed Grebes backed away as I approached. The Hooded Mergansers were not shy. They were later seen mating, so their minds were possibly on other things. Reeds by the pool held a Marsh Wren while the bushes around held the inevitable Phainopepla and a Bell’s Vireo, whose song I was now becoming quite familiar with. 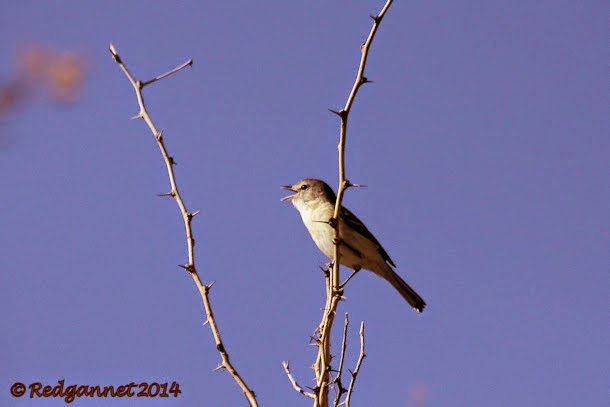 The trail headed up and over the rise and down into a very picturesque canyon on the other side. A stream flowed along the bottom of the cliffs, spanned by a charming suspension bridge. 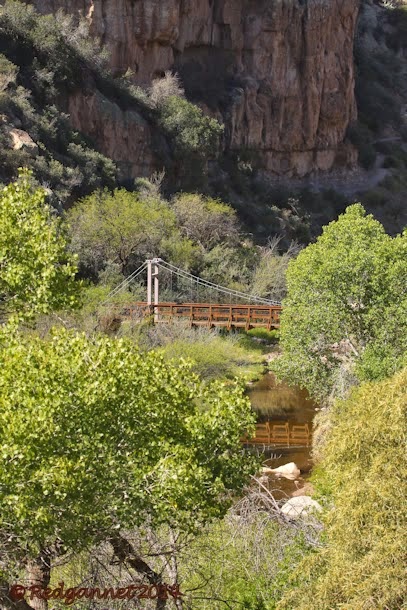 A Lincoln’s Sparrow was seen from the bridge while a hawk sat up high on a plant stem, but refused to turn around to be identified. A Red-tailed Hawk flashed past shortly after and I made the assumption that they were one and the same bird.
Looking back, I should have been more diligent in checking the cliffs as a Golden Eagle had been seen in the area. 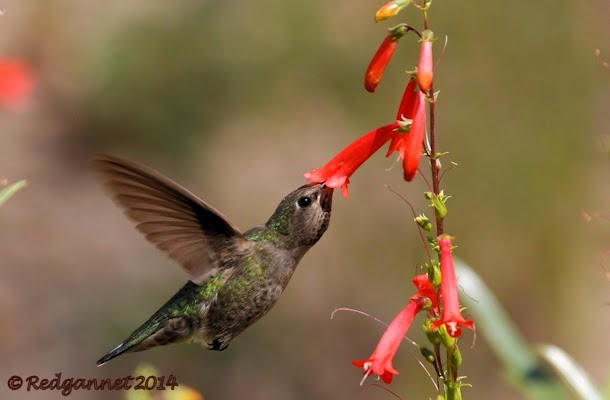 My highlight of the day came near the herb garden. I had stopped to watch a female Anna’s Hummingbird feeding from the flowers here and watched as she buzzed up to a nearby bush, hovered momentarily then alighted at a nest. 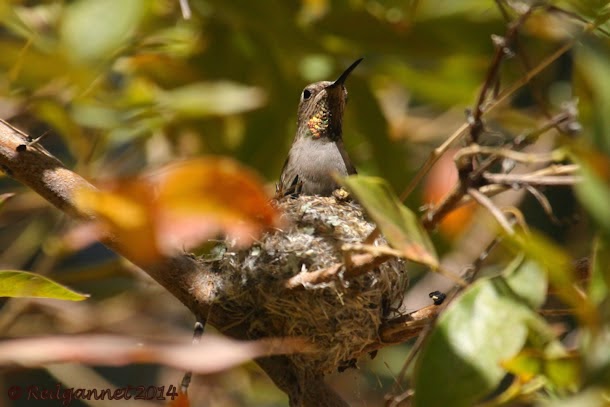 Two hungry bills shot out to vie for food and she obliged by inserting her long bill down their throats. Her throat made a pumping motion as if she was regurgitating for her young.
The lowlight of the day came in the form of an Empidonax flycatcher. It made no sounds and the only notable feature was a quick flick of its wings as it settled after flying out for an insect. I say lowlight because I hate to find birds that I can’t identify and I include most Empids in that bracket. But I managed to get a photograph and was able to eliminate all of them, so I started again. I have entered Hammond’s Flycatcher as that is what my gut tells me, but the lower mandible is all orange suggesting an erstwhile Western Flycatcher. Any help will be gladly received. 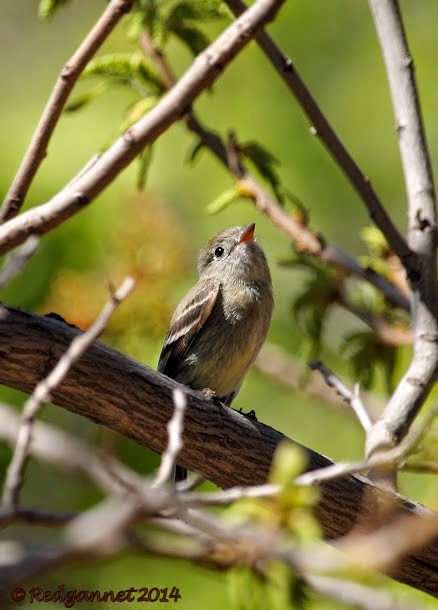 Towards the end of the walk, I managed to get a picture of a Northern Cardinal and couldn’t help but notice that it seemed brighter and longer-tailed than I was used to seeing. 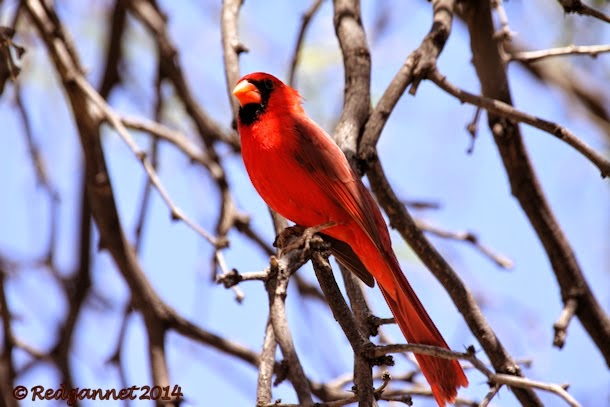 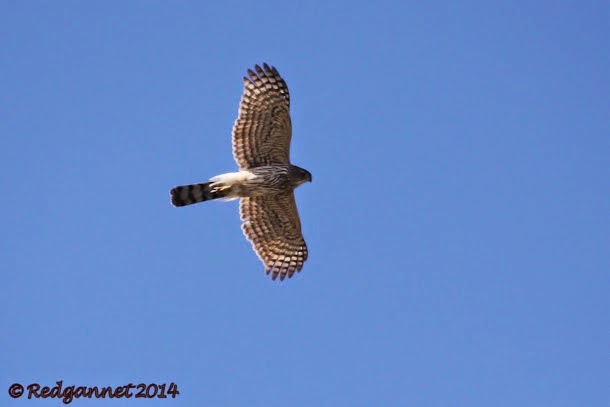 Visit the dedicated USA and Canadapage for more posts from Phoenix.