The Salt River flows west from Theodore Rossevelt Lake towards Phoenix. It is dammed along the way at a couple of spots before being canalised at Granite Reef Recreation Area to water the southeast suburbs. This post will describe a few stops along the river from Granite Reef, east to Coon Bluff via Phon D Sutton. I had imagined that the first site was bigger than it turned out to be and would keep me there for much longer, but the sites further upstream make an easy and natural extension; so much so that there is no need to make separate posts. 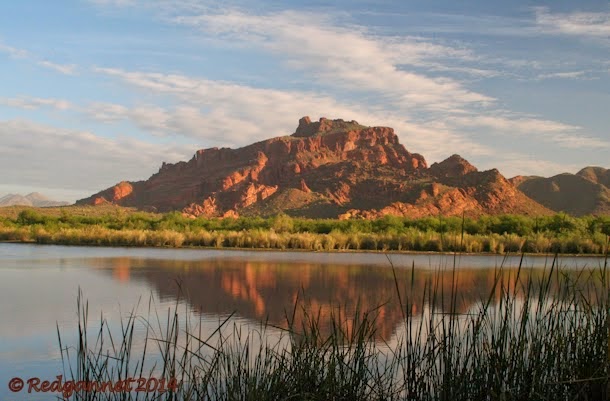 The large red outcrop on the northern shore at Granite Reef can be seen from a long way off and is on reserved territory while the southern shore has a productive mesquite bosque.  The river is wide and slow here as it approaches the dam. I arrived at 07.00 and met Babs, a local birder familiar with the site and she kindly allowed me to walk with her. 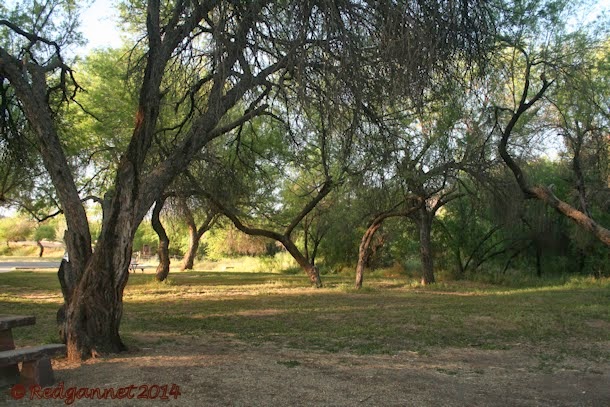 She led me through the bosque to the west towards a patch of standing water that can be seen at Google Earth ref; 33 30 48.27N 111 41 13.14W. Ducks can often be found on this pool if the river is quiet. Ringbilled Duck, Northern Shoveler and Mallard were seen here this morning. A Belted Kingfisher perched on a stump in the water while a pair of Killdeer fed at the edges. 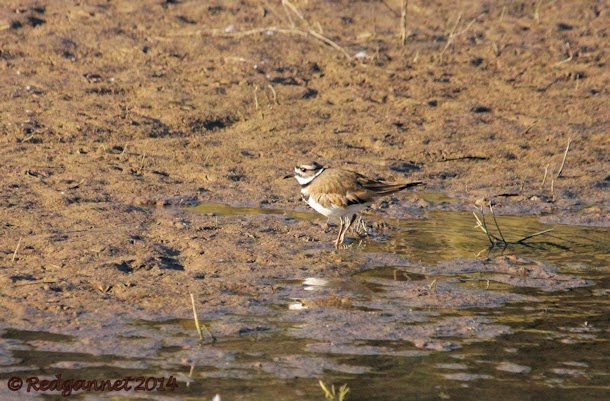 A Western Kingbird was seen perched on a fence that runs along a dry canal and Babs was able to identify Brewer’s Sparrows from their calling on the far side. Back in the mesquite woodland, a tapping gave away a male Ladder-backed Woodpecker. 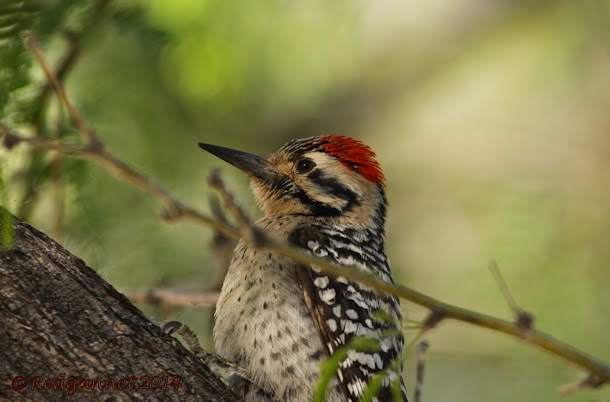 Babs called up a Bell’s Vireo and two bright, male Bullock’s Orioles were seen in the car park. 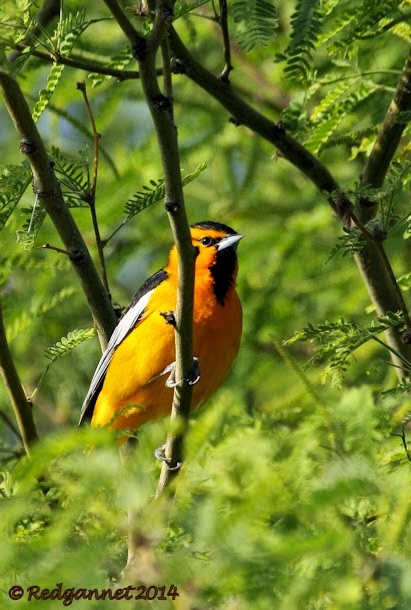 The river was quiet with just a few Ruddy Ducks on the water and Northern Rough-winged Swallows and Violet-Green Swallows flitting above. Babs pointed out a Bald Eagles’ nest in a tree on the far bank and we were able to discern one of the resident pair sitting to the side.  A Sharp-shinned Hawk flashed by a eye-level. A few hundred meters further down the river a patch of reeds provides shelter for Common Gallinules and Green Herons. 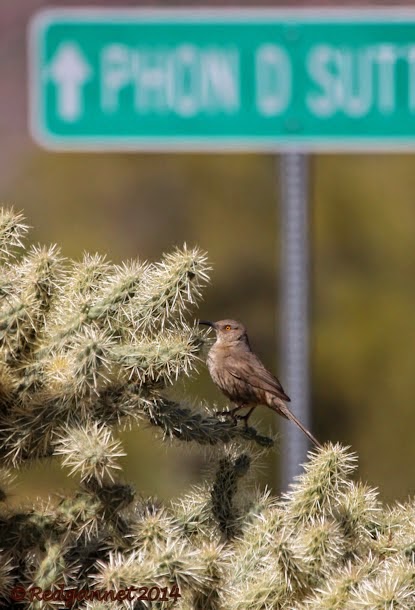 Phon D Sutton is located nearly 3 miles upstream as the N Bush Hwy runs. Under instructions from Babs, I wound the window down and drove very slowly along the approach road towards the RV camper area, listening for birds. The habitat had reverted to the default cactus and low scrub. 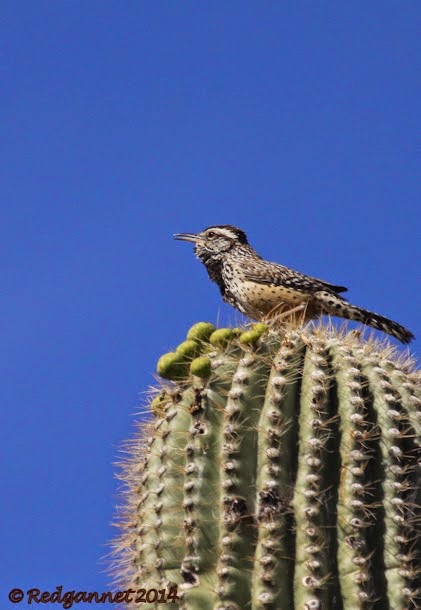 A Cactus Wren called from the top of a Saguaro Cactus and a Black-tailed Gnatcatcher scolded me from a low bush when I stopped for a picture.
It was beginning to warm up after a chilly start and my thoughts turned to rattlesnakes. A brief walk through the area failed to turn one up, but I was expecting to hear the spine-melting rattle at any moment.
Curve-billed Thrashers were common here with a small flock fighting over possession of a Cholla Cactus. 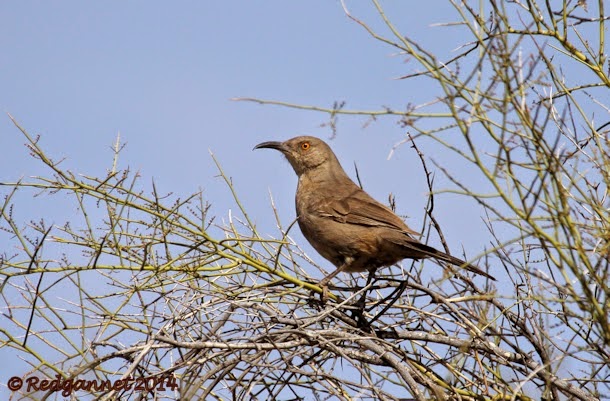 At the entrance from N Bush Hwy there is a parking area and from here, a path leads into the scrubby habitat. Another Cactus Wren was seen at much closer quarters and an Ash-throated Flycatcher hawked from a lower perch. 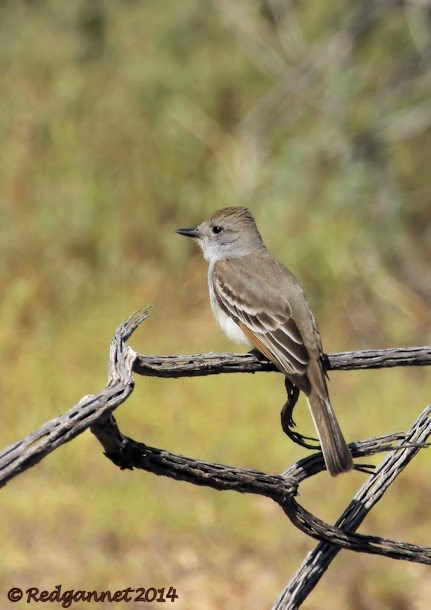 A mile further along the highway is Coon Bluff Campground. A rocky outcrop forms a cliff on the east side and runs along the stretch of river. A large island separates the flow and the river is much smaller here than at Granite Reef. I made a brief visit here on the first morning and returned for the early hours of the next morning. 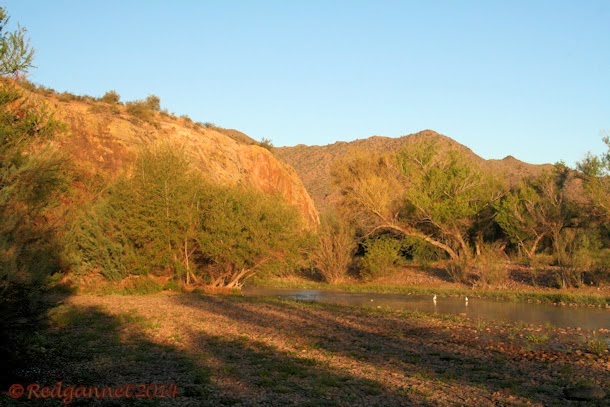 The chilly night gave way to dawn as I reached the campground and the river steamed in the low sun. I birded along the bluff to the left and found Lucy’s Warbler, whose song I became quite familiar with as the day went on. 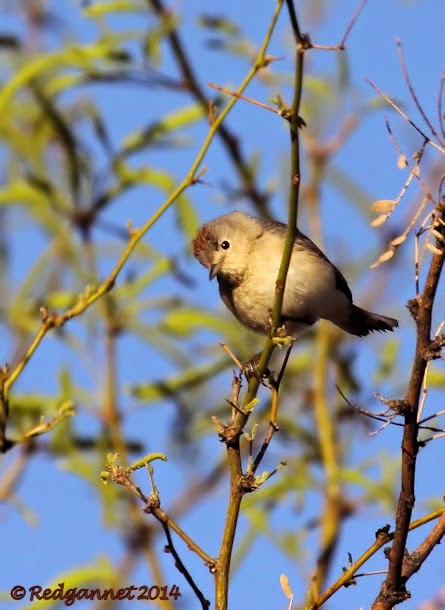 Tents can be pitched beneath the shade of the mesquite bosque. An unmistakeable Vermillion Flycatcher hawked from the trees and Verdins called sweetly. 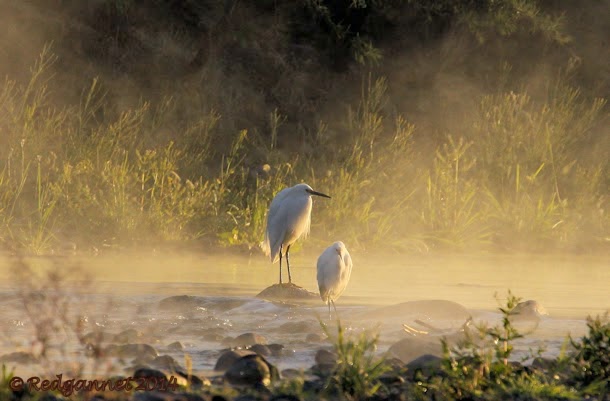 A steep, unstable bank leads down to the river which is separated by an island at this spot. The flow is shallow and broken as it passes over rocks in the riverbed. Snowy Egrets and Common Mergansers fished in the steam. 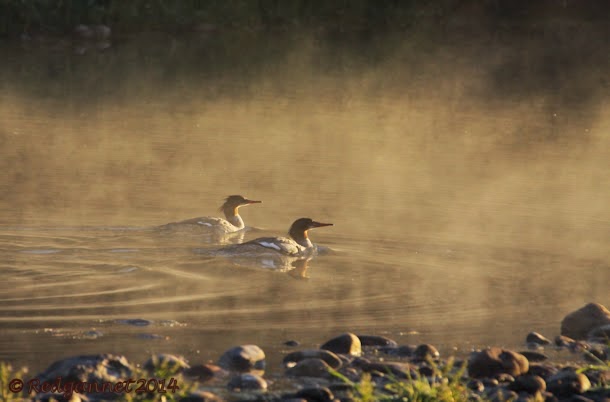 Anywhere there is a prominent perch it seems, there will be Phainopepla. This member of the Silky Flycatcher family sports large white patches in the wings. The patches don’t show when the bird is perched, but catching them in flight is tricky. I had to resort to waiting for one to take off from its snag. 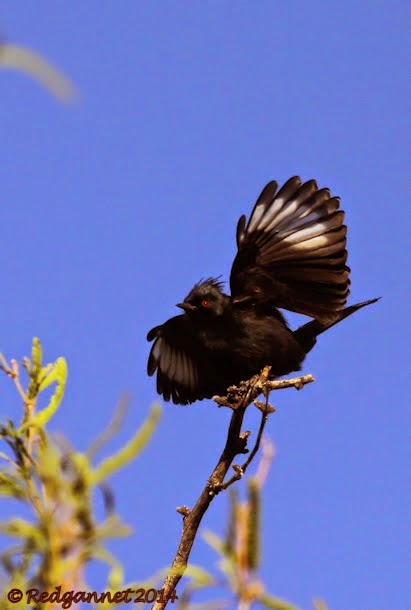 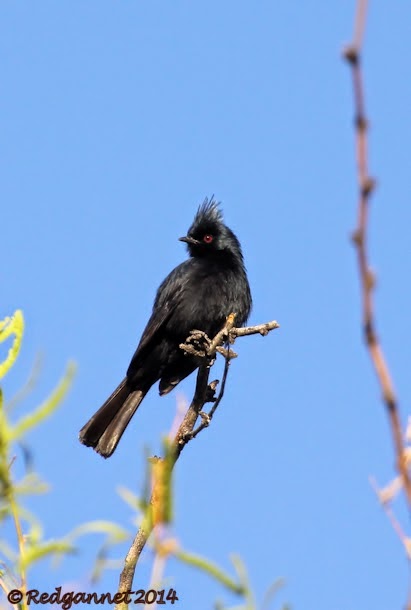 To park at any of the official lots, you will need to display a “Tonto Pass”. This is a self-certified parking ticket that must be bought in advance. It currently costs $6 and is transferable to all the participating car parks for a 24 hour period. All the above sites require that you have your ticket.
It can be purchased 3 miles south of Granite Reef Recreation Area at Bashas Supermarket on Power Road, north of McDowell Rd. There is a Walgreens slightly closer, but this branch does not open before 08.00. Bashas is open from very early.