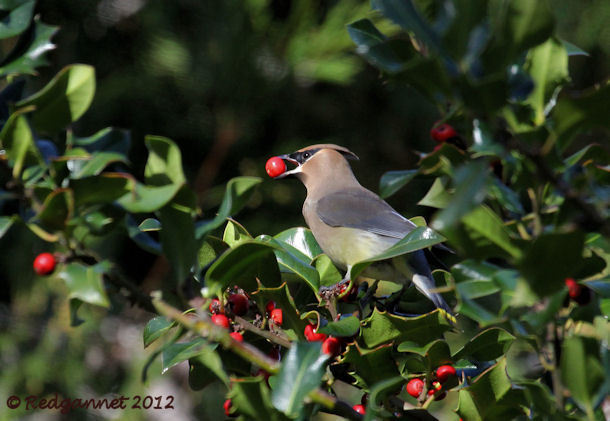 Actually, I took just as long I would have done on foot as I was distracted numerous times, notably by a flock of Cedar Waxwings feeding in a holly bush. Also found along the avenue, part of an approach list of 19 birds, were Nuttall’s Woodpecker, Golden-crowned Warbler and Western Bluebird. 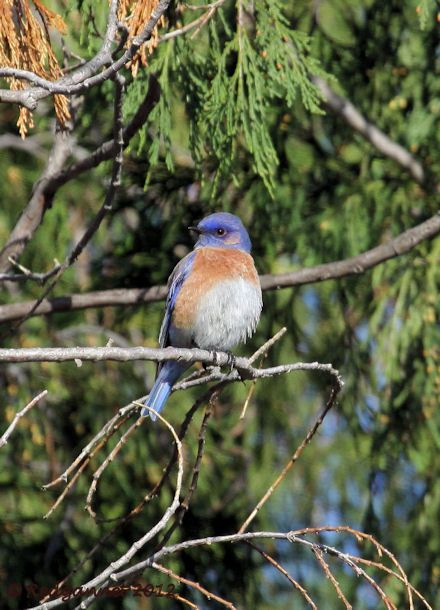 It was 10.00 by the time I reached the salt marshes, mud and Duck Pond of the Baylands Reserve at Google Earth ref; 37°27'23.53"N 122° 6'32.64"W.
The Duck Pond was too full of gulls for my tastes, so I moved quickly past and onto the slough behind it, preferring the challenge of identifying dowitchers to that of trying to separate gulls. 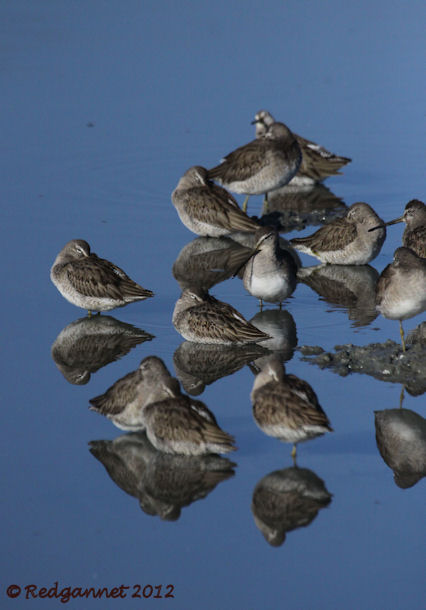 These were Long-billed Dowitchers, feeding and roosting close to the edge. The top of the tide was still a couple of hours away, so the birds would only get closer. They seem quite unwary of people here. 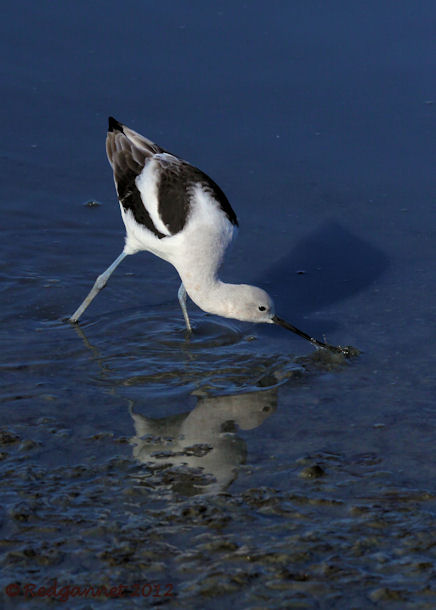 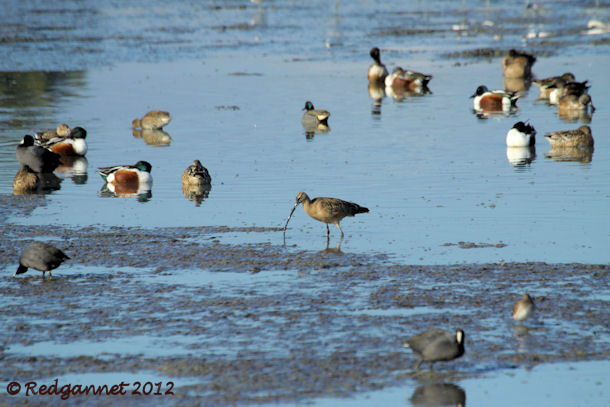 Most of the peeps appeared to be Least Sandpiper, but a few Western Sandpipers were also found, though their muddied legs made my preferred method of separating them more difficult. 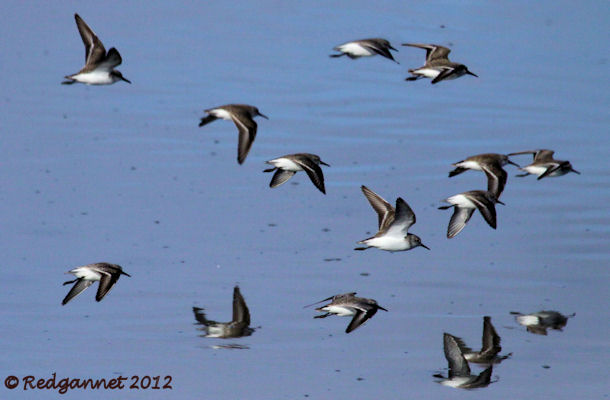 I joined a photographer on the crook of the slough which gave a good vantage for fly-by shots and we fired away merrily as anything that passed. This American Avocet had a growth and a wrybill. 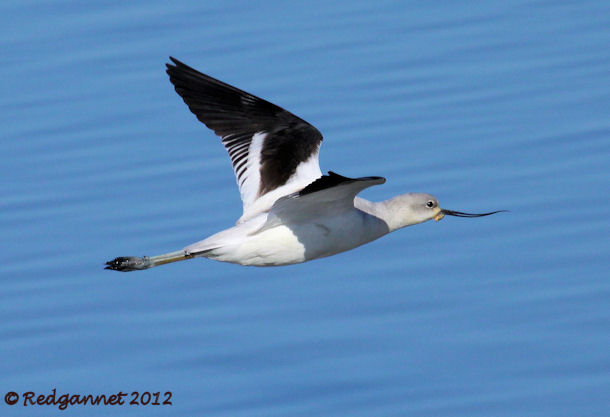 The American Avocet were as approachable as I have seen them and a couple of pairs appeared to be indulging in courtship behaviour, though there was no sign of any breeding plumage yet. The rear bird of the pair below appeared to be guiding the bird in the foreground by gently nudging and shepherding it. The bill of the female is more up-curved at the end, but I would hesitate to say which of this pair was which. If pressed I might say that the one nearest the camera is slightly more up-turned and it does have a cuter look. 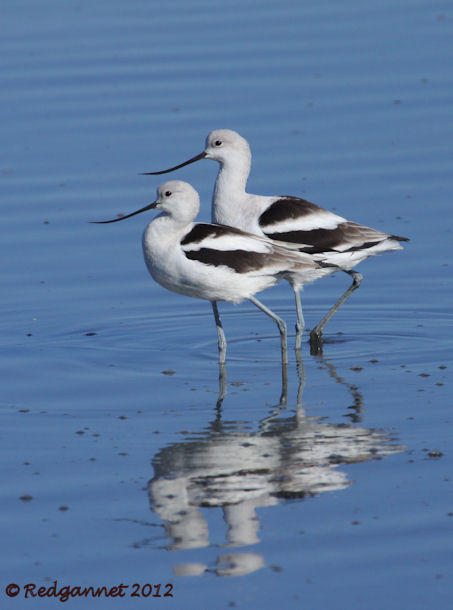 I followed the path around the slough towards the bridge. The inlet here allows the water through and a Common Golden-eye was diving in the current. 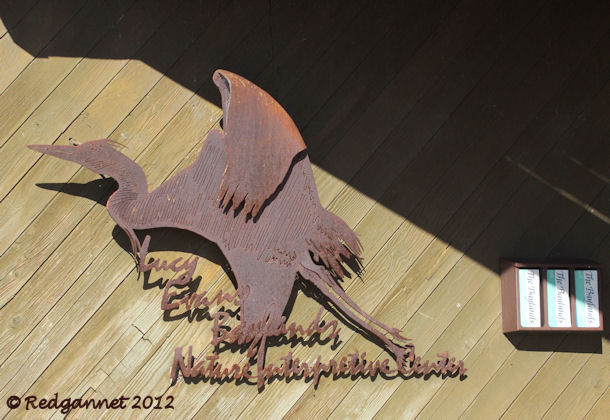 Lucy Evans Baylands Interpretative Centre stands just on the other side of the bridge at Google Earth ref; 37°27'34.68"N 122° 6'22.71"W. A veranda stretches around one side and gives access onto the boardwalk that crosses the salt marsh and reaches out to the bay. The water here was especially smooth and the reflections were almost perfect. Strange how I don't recall the water being quite so blue. I will have to put it down to the UV filter. 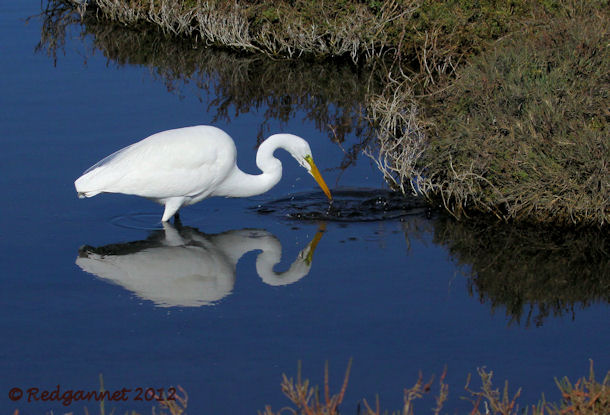 From the veranda, I could see a few birds in the small pool to the north. American Avocets, Least Sandpipers and a Greater Yellowlegs were feeding here.
The marsh was quiet along the boardwalk, but there were plenty of birds in the distance. 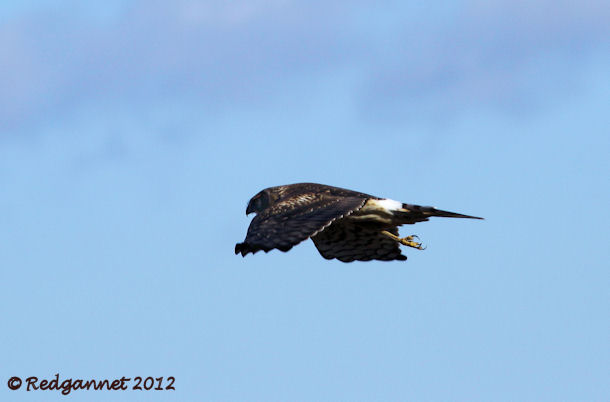 A Northern Harrier passed along by the waterline and may have had a mate staying low on the marsh. It made one close pass that I didn't see 'til it was almost past me.
Out on the bay Greater Scaup and Canvasback joined the shoveler. 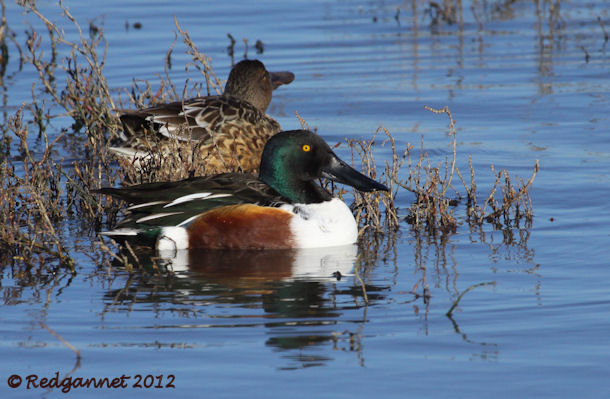 The tide was high by now and I was hoping that the rails might have been pushed up through the vegetation and into the open, but none were seen.