I was cherry-picking this morning. Rather than paying any attention to the little brown jobs that might potentially require the red pen, I was concentrating my time in looking for rails and crakes for which Muang Boran is celebrated. ‘Tis true that the grassy marsh to the southeast of Bangkok is also famous for Acrocephalus and Cettia warblers, but that kind of hard work could wait. Actually, if the truth is really brought to the fore, June may not have been the best time to look for any of them, but since I cannot dictate where or when I go, this would be my best shot. 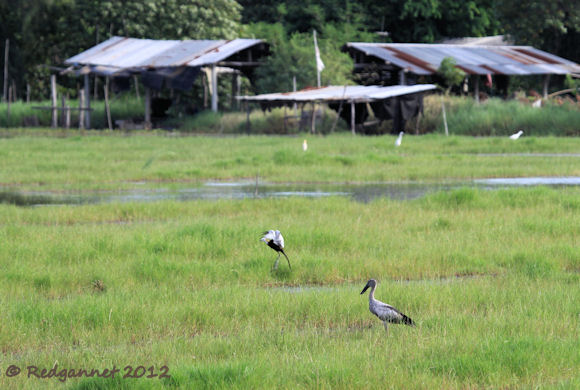 For a description and directions, I cannot hope to emulate the one at www.thaibirding.com which can be found at this link. This post will simply be a snapshot of a morning at Muang Boran (Google Earth ref; 13 32 28N 100 38 01E) in late June and confirmation that the directions are easy to follow. 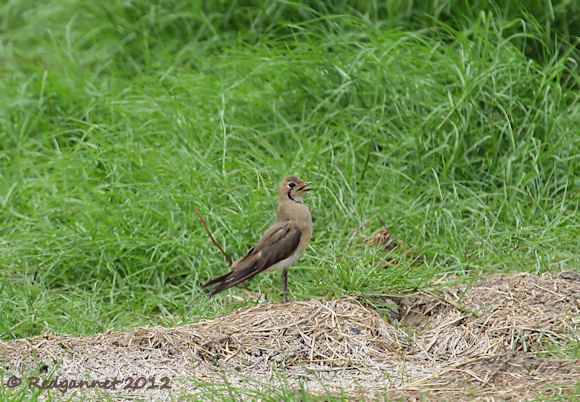 Oriental Pratincoles and Asian Openbill Storks were silhouetted against the wakening sky as I arrived at 06.15 and a Plain Prinia was the first bird to greet me as I stepped from the motorcycle taxi and entered the site. Off to my right, the area looked far too dry and open to harbour any rails or crakes, so I pressed on to the much more promising area ahead, on the left. Here, there were Bronze and Pheasant-tailed Jacanas, Black-winged Stilts and Red-wattled Lapwings. All of them made a lot of noise as I scanned. 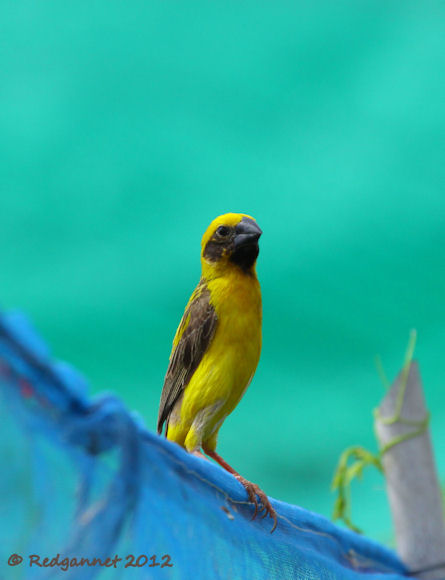 Asian Golden Weavers were easy to find and a Black Bittern flew across the path. I wanted to get a better look to convince myself that it wasn’t a large, dark, Striated Heron and at the third time of asking, managed to get a good look to confirm the ID. Having only ever seen this species twice before, it was odd to find it so common here. To have seen one feeding would have been wonderful, but I only saw them in flight. 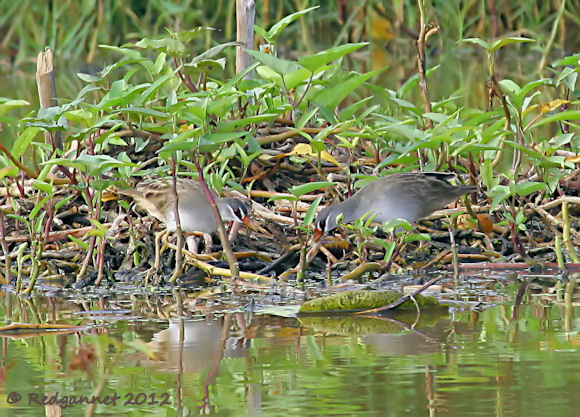 The White-browed Crakes made themselves very obvious by clambering around at the top of the grasses. So much so, that they could be seen over 100 meters away. They were especially common in pond 5 which is long and thin and more conducive to photographs as you can get better positioned for the light. Beyond pond 5, the path peters out, so I spent a short while scanning back across the marsh noting Cattle Egrets and a juvenile Purple Heron. 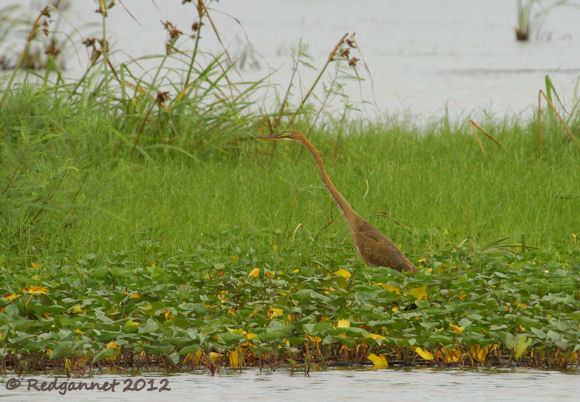 Even by 09.00, the day had become oppressively hot. My Western Palearctic constitution was not coping well and I went in search of some shade. The structures and houses of local families that gain their living from the marsh hogged all the shade, leaving me very uncomfortable by mid-morning. The tracks around the marsh are narrow and in some cases overgrown by weeds spilling over from the verges. I was convinced that I would come across a snake at some point during the day, but it looks as if someone got to this one before I did. 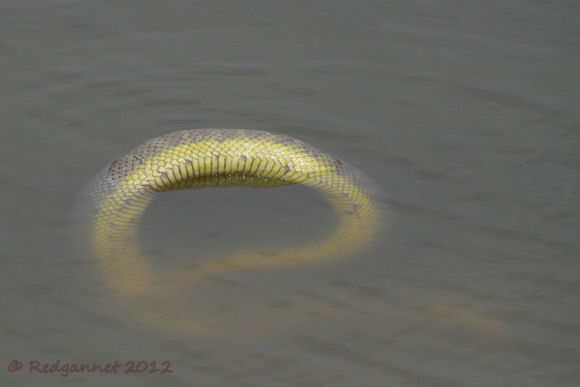 The families that live in the marsh are very tolerant of birders, but take issue with the birds that are likely to eat into their profit margin. Deterents such as nets or lines strung across the water make landing and taking off difficult, so bird such as herons and cormorants avoid these areas. More sinister are the hooks that trail from the lines. Whether or not, they are set to catch fish-eating birds, I cannot say, but casualties occur and skeletons and carcasses of birds have been seen hanging from the lines. 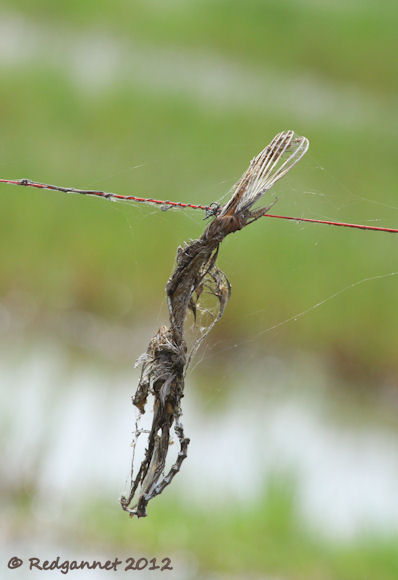 The Ardeola species here should have been Javan Pond Heron,  but in their non-breeding colours they are very difficult to separate from their Indian counterparts. Only when one flew by with his breeding colours firmly pinned, could I be certain. Even then it pays to be familiar with what you are looking for before having to identify it at distance. 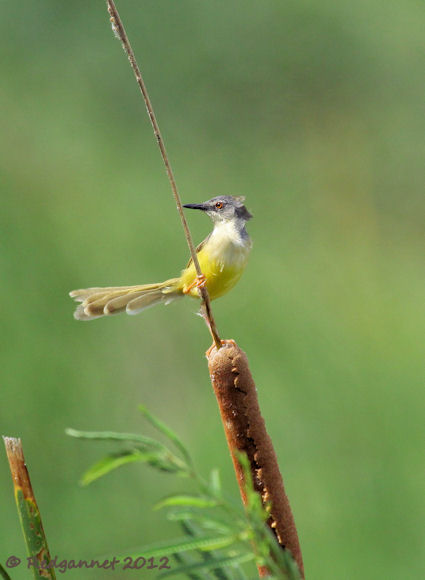 A Zitting Cisticola was seen and plenty of Plain and Yellow-bellied Prinias called from the reeds and grasses.

I had promised myself that I would buckle down to the little brown jobs once I had had a look for some rails and crakes, but I just could not stand the heat any longer. The Black-browed Reed Warbler and the Manchurian Reed Warbler that I had planned to tick would have to wait for another day. Most of them would have been north of here anyway at this time of year although I am led to believe that a few stay for the summer. Winter would have the added bonus of a good head of Baillon’s Crake and Slaty-breasted Rail, so I am hoping for another trip towards the end of the year.


On the next trip, assuming that I can tear myself away, it might also be possible to double up the trip with a visit to the mangroves and pier at Bang Pu Mai, just 2.5 miles further down the road. Or perhaps if I am of a cultural  frame of mind, the Ancient City is right next door.
It may pay to take the Skytrain as far as Bearing Station and get a taxi from there. City drivers are less than keen to be travelling out of town just before the morning rush starts.

Visit the dedicated Asia Page for more from the region.
Posted by Redgannet at 04:59