The contributors at 10,000 Birds posted a series of articles about poop and how much birds seem to love it. Well, it isn’t the actual poop itself that attracts the birds, but the wonderful squishy environment that lots of poop can produce. 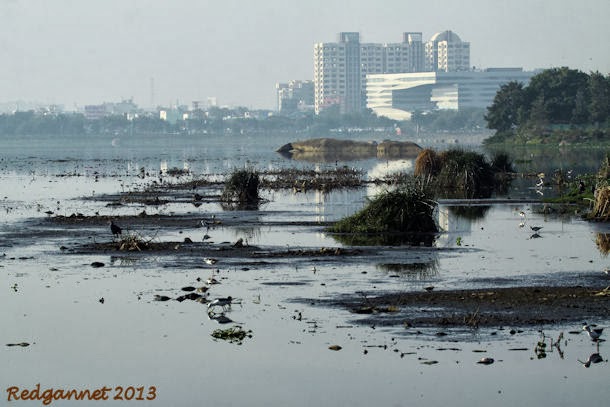 I was called at a moment’s notice to fly to Hyderabad. It was my first visit to the area and I was delighted to find a wonderful squishy delta on Hussain Sagar (the large feature lake in the centre of the city), that appeared to have been built from the contents of a large drain that spilled into the lake. 90 million litres of delta-building material flows into the lake every day, producing a very attractive environment for the birds. I was lucky that this visit was during the winter as many of the wading birds seen are seasonal visitors and breed much further north.
The Black-winged Stilts were easy to spot and were registered before the taxi had even stopped. A White-throated Kingfisher flashed across the wide drain and Asian Koels cried from a line of trees between the road and the water. 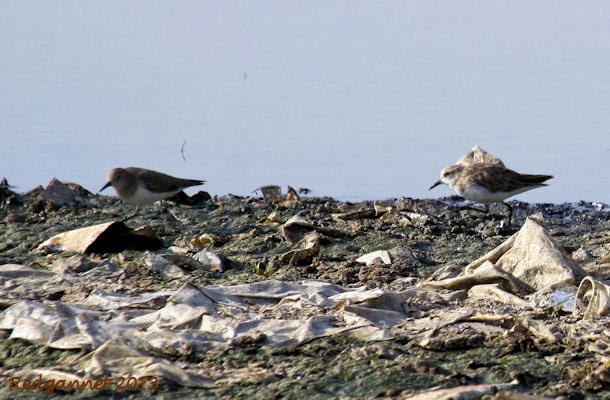 I was en-route to Sanjeevaiah Park, but stopped early to look at the lake. Sadly I was looking straight into the rising sun, so I hardly bothered with the camera and spent more time trying to split stints and sandpipers.
There are two likely Stints, but I could only reliably identify the Little Stint with the binoculars. One that could have been a Temminck’s Stint was chased off by a Little Stint as soon as I got the camera trained on it, but the snatched picture confirmed the split. 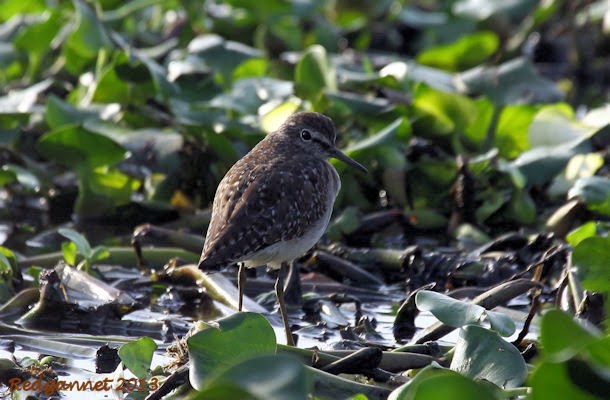 There were lots of Wood Sandpiper, but the similar Green Sandpiper was quite likely too. I only caught one for sure with broader tail stripes and dark underwings. I don’t remember taking this shot, but it looks like a contender. 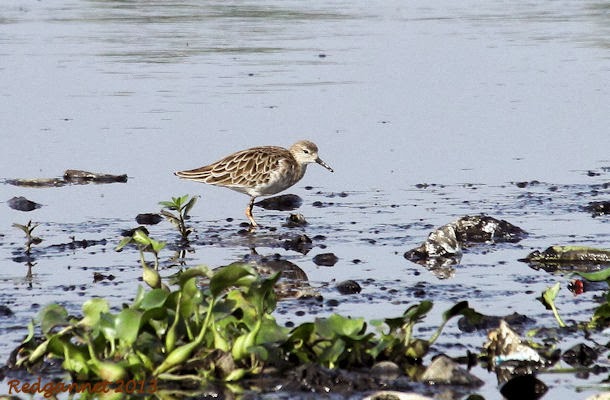 The extent of the Ruff’s distribution may not quite reach as far as Hyderabad, so I enclose this photo as a record in case the sighting should be called into question. 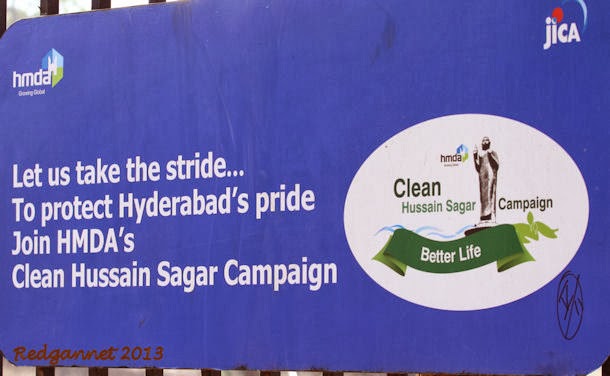 The delta reaches perhaps 400meters out into the lake, but as this is my first visit, I can’t say if it is a year-round feature. There is a campaign to clean up the lake. Much of it is made up of floating litter and the solid islands are very low-lying. I guess the personality of the place would change very quickly as water levels fluctuate. The water-levels had dropped enough to allow me to walk down the bank a little at Google Earth ref; 17 26 11.49N 78 28 4.83E). Black Drongos hawked from posts and a Clamorous Reed-warbler scolded from a bush. 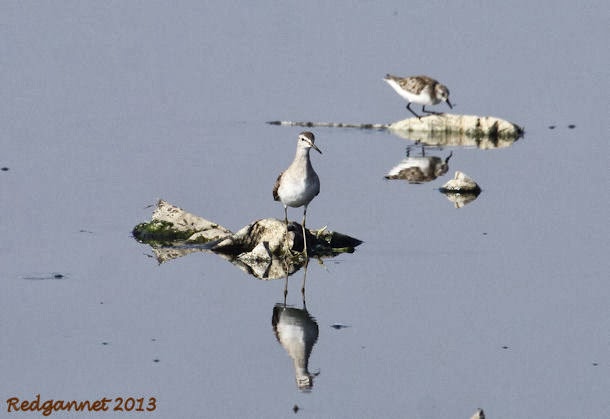 At Google Earth ref; 17 26 12.18N 78 28 16.42E, there is a small promontory that juts slightly out into the lake and allows for a better light angle.
The Purple Swamphens were very obvious, but the Little Ringed Plovers needed careful scanning to pick out. Around the edges, Indian Pond-Herons, Cattle Egrets and Bronze-winged Jacanas picked through the water hyacinth. 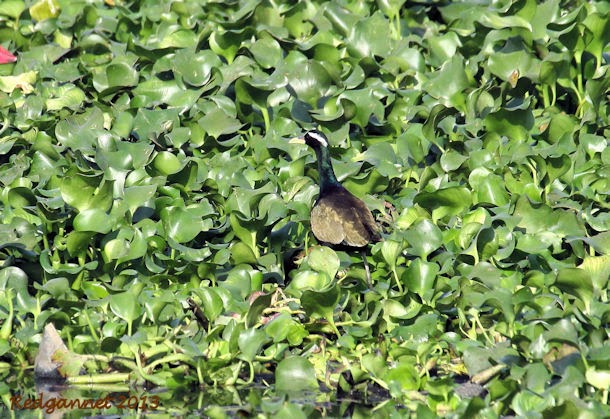 A European Marsh Harrier flew over and sent clouds of stint, sandpiper and stilt into the air. It was odd to note that the constant presence of Black Kites caused the waders little or no concern, but a cruising harrier put them immediately to flight. 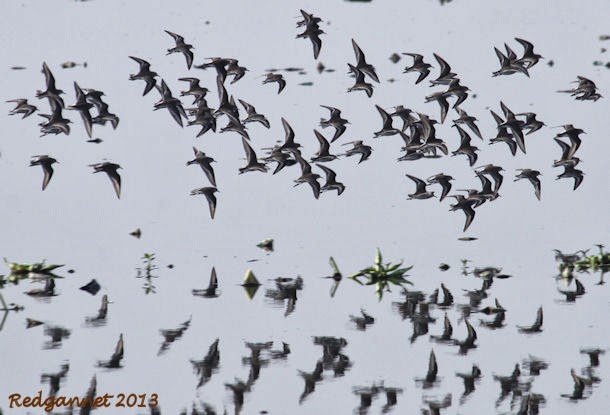 In the distance, many more birds could be seen, but I was unable to identify them accurately so far off in the light conditions. A few that I could pin down were Indian Spot-billed Duck and Red-wattled Lapwing, but these were also easily seen much closer in. Nevertheless, it would be interesting to have a scope handy and the viewing conditions would probably be better in the afternoon.
There are no time restrictions here as birdwatching can be done from a public overlook, but nor are there any facilities. Sanjeevaiah Park is approx 1km further along and I believe that there may be refreshment stands and toilets there. 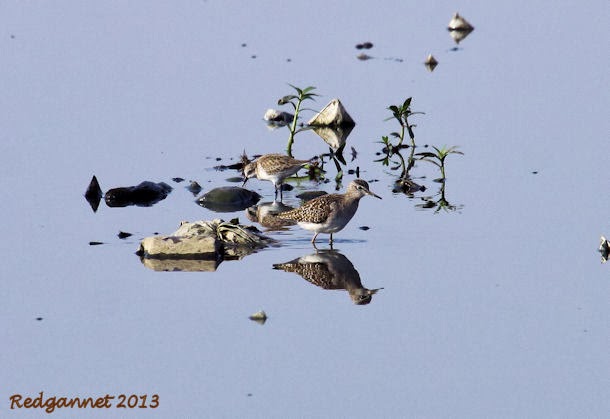 To instruct a taxi driver, ask to be taken to Necklace Road which runs around the northern section of Hussain Sagar Lake. The delta can be seen in the northwest corner of the lake between Jalavihar Entertainment Water Park and Sanjeevaiah Park.

This is the first post from Hyderabad, but visit the dedicated India Page just the same for more posts from the sub-continent.
Birding, birdwatching in Hyderabad, Andra Pradesh.
Posted by Redgannet at 02:00