Saturday in the Forest, Singapore, June 2012

It was barely light as I stepped from the bus opposite the Singapore Island Country Club (SICC). There seemed to be plenty of time to stop on the footbridge and enjoy the silhouetted birds flying over towards the forested area of the Central Catchment Area. As the light began to increase it was possible to make out Common Ioras and Pink-necked Pigeons at an unaccustomed angle from my vantage point. The noise of the traffic passing beneath me rather took the edge off, so I ventured into the gloom of the forest at Google Earth ref; 1°20'12.49"N 103°49'7.67"E. 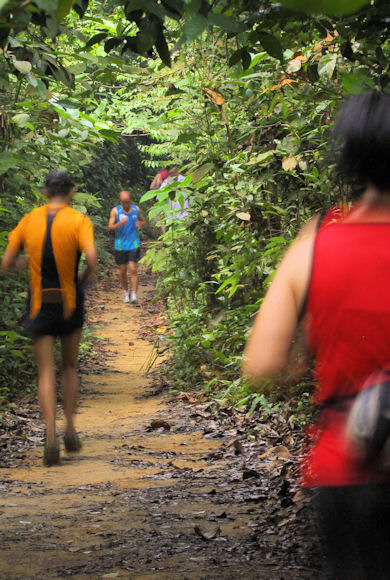 People were in the forest! It is true that the wider purpose of writing Redgannet is to encourage more people into the outdoors and to provide them with the information on where to go and how to get there, but I hadn’t expected to be so successful! In all honesty, the joggers had probably not been coaxed out of their Saturday morning beds at sunrise as a result of Redgannet’s previous posts from Singapore’s forests, but they were making his current efforts more difficult. The narrow paths did not allow a birdwatcher to stand and stare without causing a snarling jam of joggers, running on the spot until they could get past. The boardwalk is just wide enough to allow one to stand as another passes, but trying to take photographs on a wooden walkway with people thumping by is not conducive to good pictures. I took refuge up Jetaling Tower (Google Earth ref; 1°21'4.74"N 103°48'22.89"E) and watched them pass beneath, less noisy than the traffic from earlier.

The moral of this story is to avoid weekends if you are hoping for quiet, contemplative forest birding. 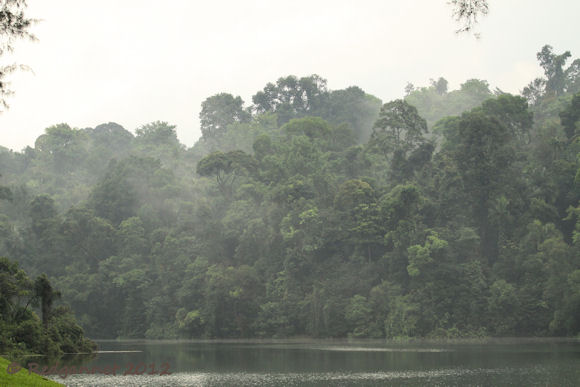 I was surprised at the lack of biting insects on this morning in early June. I was tagged a couple of times, but wondered if there had been more mosquitoes, would there have been fewer joggers. A trade off would be considered for next time. 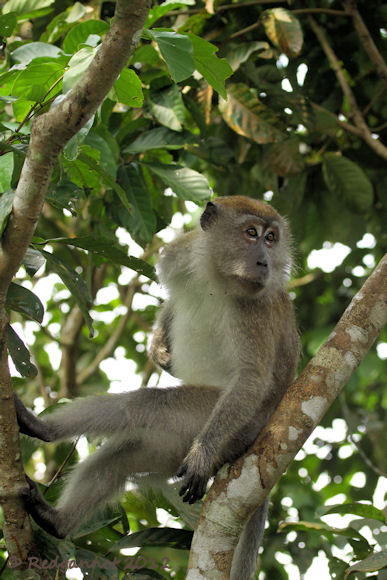 Long-tailed Macaque
But there were birds. Let’s not forget that this is primarily a birding website rather than a whinging forum. There were even 2 red-letter birds to add to my collection.


First up was Germa(i)n’s Swift. This is one of the very difficult Collocalia species and it only appears here after long deliberation and elimination of the other contenders. The second was Van Hasselt’s Sunbird.  A very confusing female sunbird was seen from the tower and I could find nothing in my field guide to match it with. Another birder there assured me that it was the Purple-throated (Van Hasselt’s) Sunbird, but I could not corroborate his assertions. An unmistakable male, seen the next day, eased my conscience, but I am still looking for a better match for the female. She had an orange patch beneath her chin that might potentially be explained away as staining, but the orange legs still stand out as an issue.
If anyone can throw some light on this, I would be very grateful. 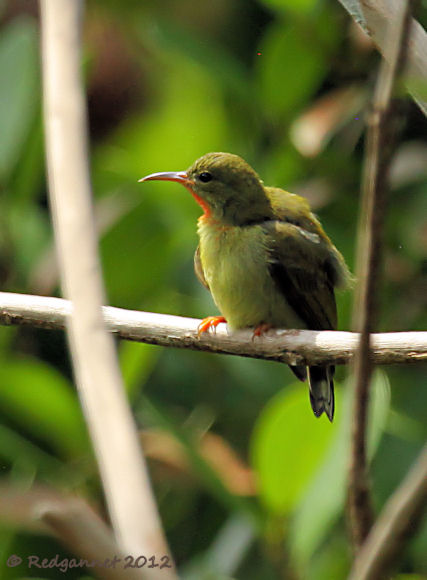 Jetaling Tower (Google Earth ref; 1°21'4.74"N 103°48'22.89"E) has six levels and takes the observer high into the tress to look out over the forest. Sunbirds and Blue-crowned Hanging Parrots are commonly seen from here, but the crafty spotters get to the tower as early as possible for the show. 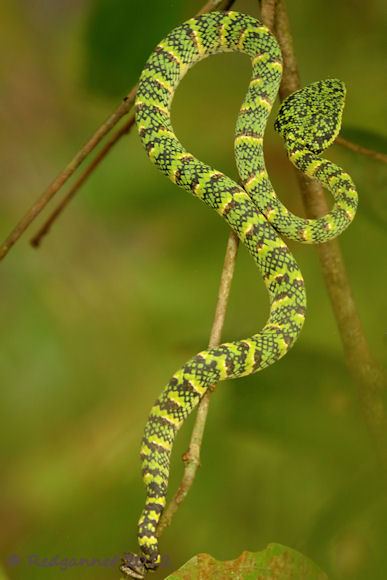 More red ink was needed for the snake, a beautiful Wagler’s Pit Viper seen from the third stage of the tower. 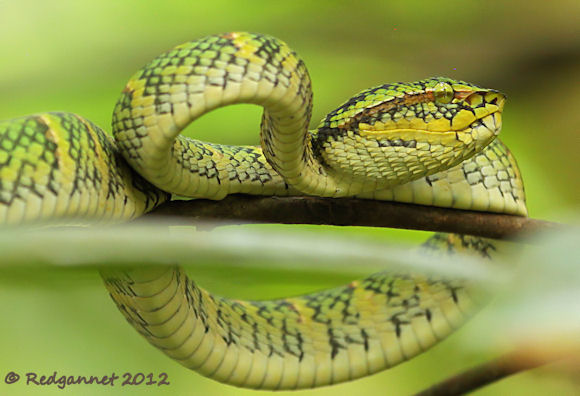 The day became even hotter and the joggers petered out to be replaced by walkers and families. They were slower, further between and more inclined to wait if I was stopped on the path, so I returned to ground level. 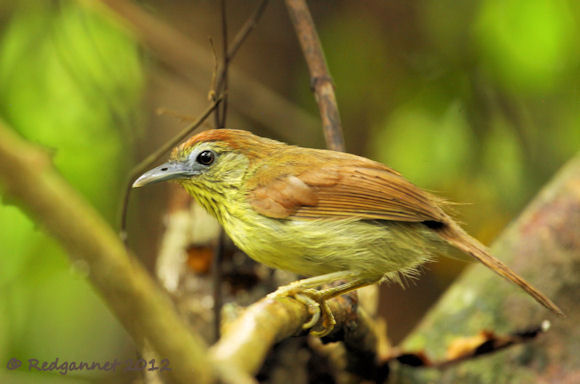 Pin-striped Babblers, acrobatic little birds of the shady forest, were more evident and quite approachable now that most of the tramping traffic had passed.
There were dragonflies too with a number of familiar species seen. Tyriobapta torrida sat well for a photo in the darkness of the forest on the concrete bridge at the tower end of the boardwalk. 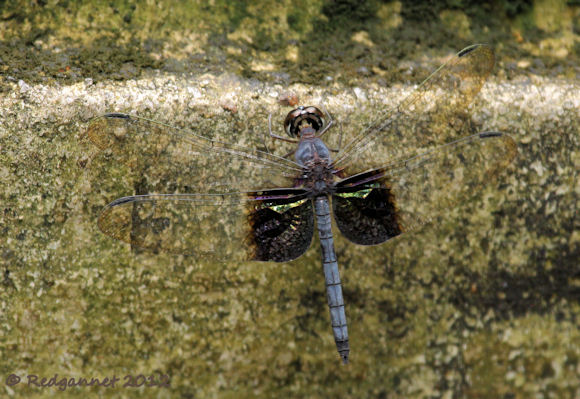 A path borders the reservoir and the golf course. A Collared Kingfisher pair had laid claim to a hole in a tree within a few meters of the path. The parent bird would alight on a nearby branch until there was a gap in the passers-by before swooping down to deliver food through the entrance. One bird stopped inside for a short while allowing me the chance to set up an exit shot. It was so hot by now that I almost gave up waiting for it to re-emerge. 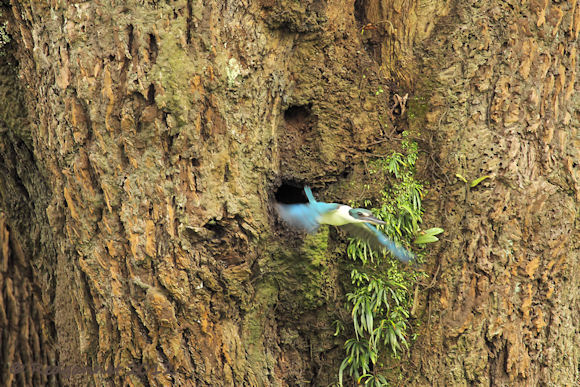 Despite being very busy, it is a beautiful forest and well worth a visit. Reaching as far as the tower is usually about as far as I wish to go without a Sherpa to carry water. If you have the opportunity to avoid the weekends, do so. I was able to refine my travel arrangements and avoid taxis by taking the MRT train to Toa Payoh Station and catching the 157 from there to the stop opposite Singapore Island Country Club (B02 Adam Road). Cross over the foot bridge and walk 150m back along Lornie Road past the entrance of the golf course. There is a path leading left into the forest at Google Earth ref; 1°20'12.49"N 103°49'7.67"E 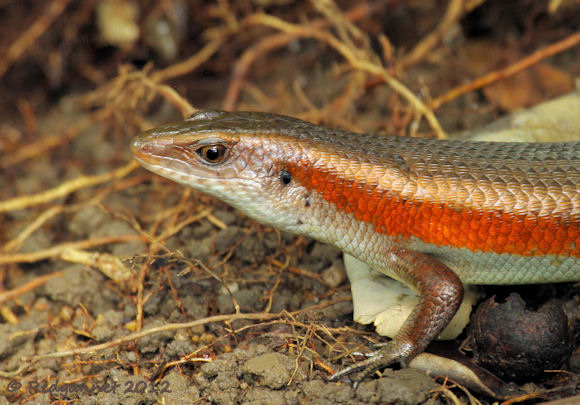 Visit the dedicated Oriental Page for more from the region, including Sungei Buloh, Singapore Botanical Gardens and Paser Ris.
Posted by Redgannet at 11:02