Sydney was sporting an autumnal look as the southern winter approaches. It was cool enough to have the locals reaching for their jackets, but 12C is a perfect temperature for an overweight sweaty bloke who was planning a bit of a hike. 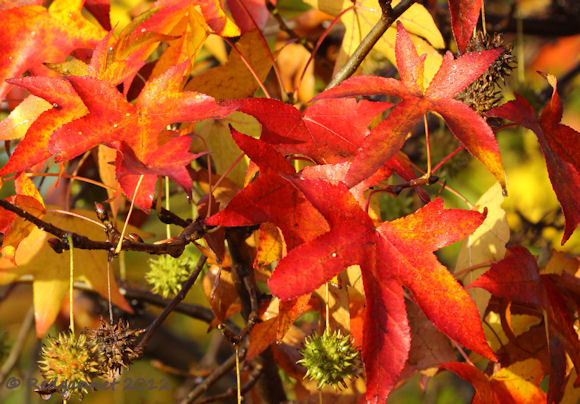 I started from Concorde West as usual, but was planning to cover more ground today and return by ferry from the wharf on the Parramatta River. As usual, birds were seen before even leaving the station with Pied Currawong, Noisy Miner, Australian Raven and Rainbow Lorikeet seen before passing under the road bridge at the end of Victoria Ave. A flock of 30 Sulphur-crested Cockatoos flew raucously over and alighted on the large aerial just inside the park. 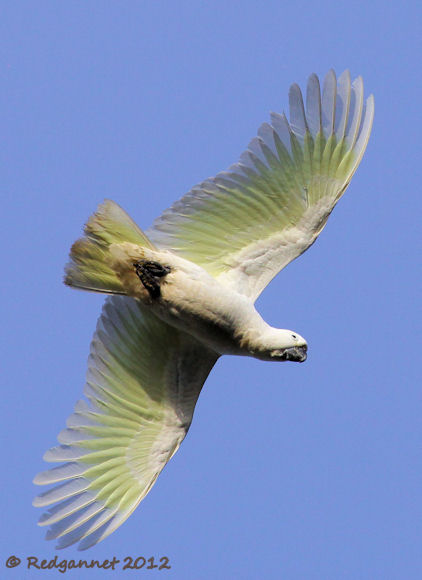 Yellow Thornbills, Spotted Pardalotes, Grey Fantails, and Superb Fairywrens formed a mixed flock to welcome me into the scrub along the path that passes the freshwater ponds. 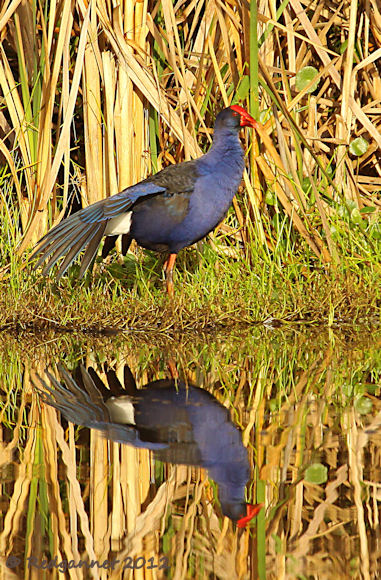 A Purple Gallinule reflected in the pond that it shared with a few Chestnut Teal and a Pacific Black Duck. 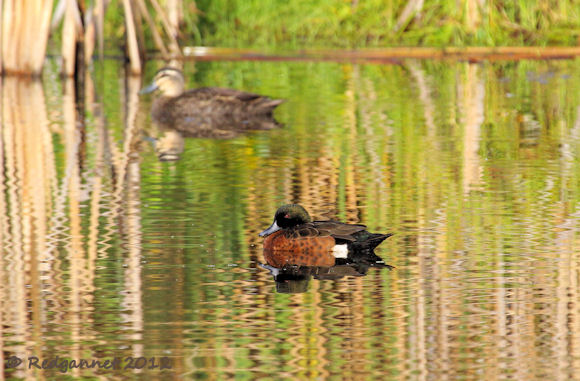 The water level in the lagoon was as high as I have seen it before. There was not a wide variety of birds to be seen this morning, though Chestnut Teal, Grey Teal and Black-winged Stilt were plentiful. A few Black Swans drifted carelessly across the surface with one taking time to show off the flight feathers that so often get missed on the closed wing. 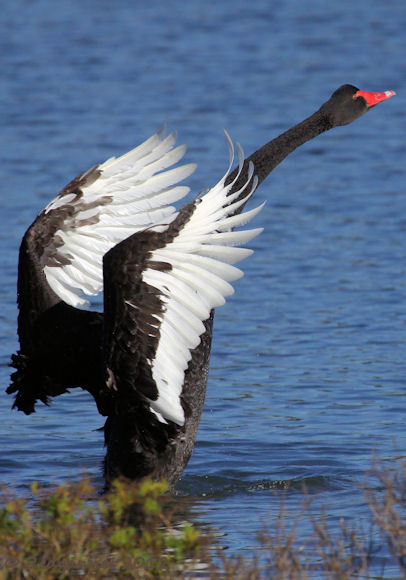 At the far end of the lagoon, I stopped in at the hide for a while. The high water had covered the mud which is usually enjoyed by the tiny Red-kneed Dotterels and it had concentrated the Black-winged Stilts around the small island that they shared this morning with the Australian Pelicans.
On Homebush Bay behind, a few scuttled boats provided roosting spots for the missing Dotterels as well as Anhinga, Silver Gulls and Pied Cormorants. 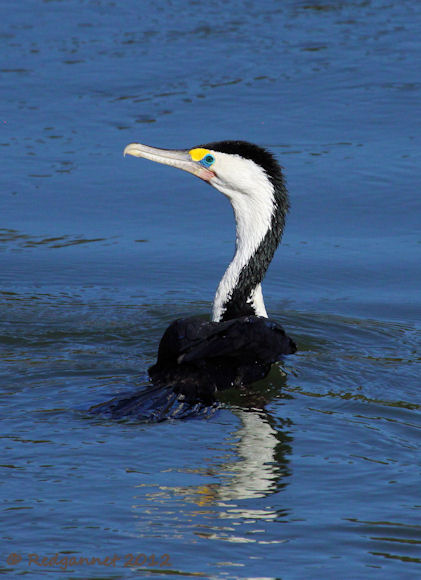 Beyond here, I was venturing into new territory. I had arrived in Sydney early this morning and the rest of the day was mine, so I had no time restrictions and was able to continue across the Bennelong Parkway bridge at Google Earth ref; 33 50 05S 151 04 33E. A Rufous Night Heron roosted in the mangroves overlooking the side channel here and a Striated Heron watched patiently from the barrage.
I took the path through the Olympic archery ranges before cutting across Hill Road into the Narawang Wetlands which had been my main purpose for this morning’s visit. The marshes here are man-made, managed for Bell Frogs with a boardwalk passing through much of the system. There are shallow and deep pools with lots of reeds, rushes and water vegetation, but not much by way of birds. 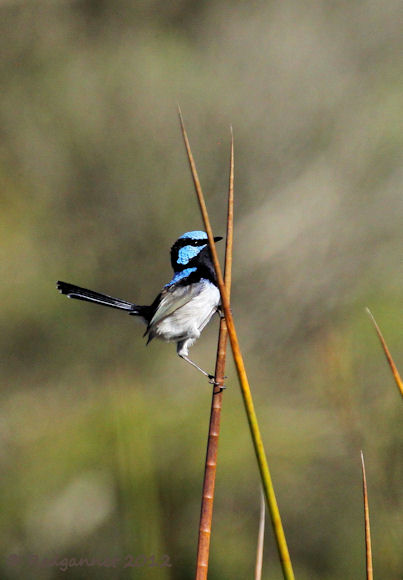 A few Superb Fairywrens were seen among the rushes and some Australian Grebes dived and disappeared into the reeds at my approach, but most of the action came from the higher trees around the edges. Black-faced Cuckoo-shrikes were seen perched in the topmost branches and a Grey Butcherbird sat out proud on a snag.
My secondary target for the day was a visit to Birdlife Australia Discovery Centre. The gates from the wetlands leading into Newington Armory were closed, so I had to take the long way round via the gaol. The public displays were closed when I arrived, but the friendly and helpful staff opened it up for me to have a quick look. After a quick glance at my waistline, they warned me that the gap in the fence was quite narrow and then pointed me towards the exit of the armory. Sure enough, for a chap with a pie dependency, it was a bit of a squeeze to get out. By the river here there is another wetland with viewing gaps cut into a screen through which good numbers of Chestnut and Grey Teal could be seen, but more locked gates that looked as if they did not open very often for casual viewing, blocked further penetration into the area. 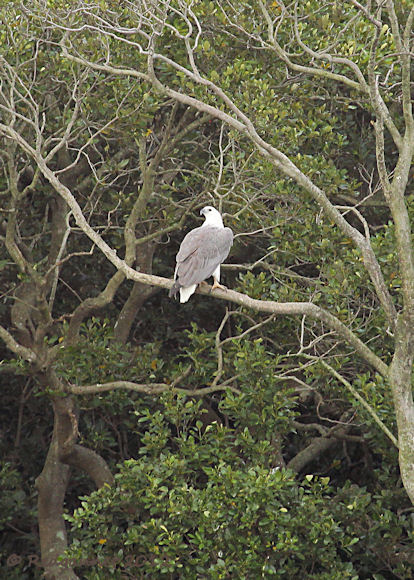 There is a pair of White-bellied Sea Eagles that feature as stars of the Discovery Centre’s webcam, building a nest nearby each year and raising their chicks under thousands of watchful eyes. The bird perched in the mangroves across the Parramatta River was possibly one of the pair which should be returning to their duties later this year. It was time to rest my weary legs and I took the time to try to get a long-distance shot of the eagle. 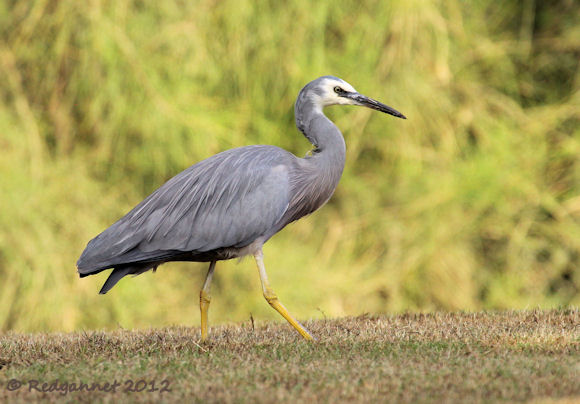 A Brown Hawk flew past and flushed a White-faced Heron that had been picking it way along the shore towards me.
The ferry timetables did not suit me at this time of day, so I ended up on the bus which runs between the wharf at Google Earth ref; and Strathfield Railway Station (a couple of stops closer to the city on the same line as Concorde West).

Visit the dedicated Australia Page for more from the Lucky Country including, Sydney Botanical Garden and Royal National Park
Posted by Redgannet at 01:51