A short fingernail of a moon hung low in the eastern sky between Venus and the faint glow of morning on the horizon. There was just enough light to silhouette the fruit bats as they returned to their day roosts. I was on a train travelling south from Sydney to a small town called Waterfall. It is a ride of just over an hour on the Illawarra Line. It is the perfect place to walk either east into Royal National Park, or west into Heathcote. It was forecast to be another scorching day, but just before the train pulled in, a mist rose from nowhere and blanketed the area One bird that you can always rely on to be noisy and conspicuous is the Rainbow Lorikeet, even in the fog. 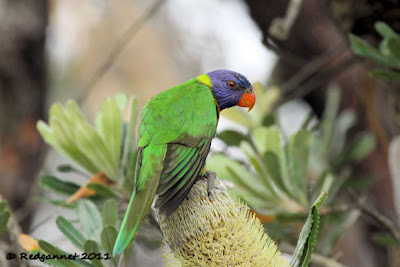 My thought processes went a bit like this; by pushing east into Royal National Park while the mist prevailed, I would be well placed to return with the sun behind me when the fog burned off. By heading into Heathcote, I would have to return into the sun.
From the ramp that exits the station, I turned left and accessed Royal National Park via the Olooru Trail. There are two ways to do this, either by cutting through the station car park where a sign points down a short flight of steps into the bush, or, follow the road round and cut into the bush just beyond the school. Either way you will come to a big open patch of grass known as an oval and the trail continues at its eastern edge through a gate (Google Earth ref; 34 08’ 16”S 150 59’ 58”E) 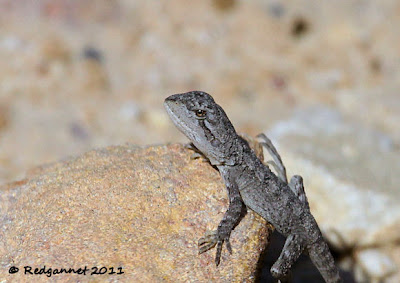 The habitat is medium height gum woodland mixed with heathland and tiny meadows of tough grass by the roadsides. Unknown to me at the time, there is a swamp to the left (north), of the track. The road is built for access by parks vehicles, but the gate at the oval prevents public access.
Apart from a couple of Laughing Kookaburras, Black-backed Australian Magpies and some Superb Fairywrens, there was not much to kick start a list. The mist hung around and dampened all activity, so I pressed on into the park trying to make as much headway as I could.
As I passed from the woodland at the start of the trail to the first patch of heathland, a flock of New England Honeyeaters flew across the road and the grunting and cackling calls were finally pinned down as those of the Brush Wattlebird. The other distinctive sound of the south-east Australian Bush is the dramatic call of the Eastern Whipbird. The male follows a soft gurgling build up with an emphatic “whip” finish to which the female murmurs a soothing reply. They can sometimes be difficult to see, but one flashed across the road in response to a “pish.” 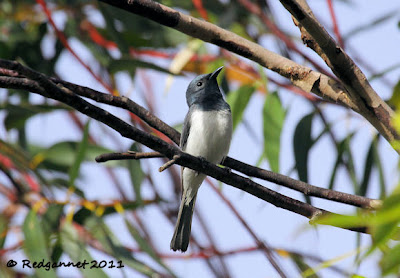 Eventually the mist began to lift and a party of birds immediately came to the road’s edge. A Leaden Flycatcher was feeding a hungry fledgling and an assorted bag of honeyeaters flitted through the eucalyptus. White-faced Honey-eater, Yellow-gaped Honeyeater and an Eastern Spinebill with a recent fledgling were in the upper storey, while from low down, a White-browed Scrubwren scolded me. A flock of Yellow-tailed Black Cockatoos, hissing and wheezing and generally making very eerie calls added to the sudden pandemonium. They landed in a dead tree just beyond a tiny gap to see them clearly through. 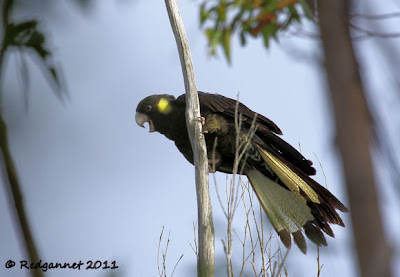 By now, I had covered a fair distance and made the decision to carry on to Olooru Waterfall, just over 6kms from the train station. I figured I was probably more than half way and you never know, there may be dragonflies there. There were a couple of considerations to take into account; it was heating up very quickly now that the sun had burned off the mist, and the track was predominantly downhill now. The gradient was slight, but with temperatures predicted to reach 40C, it would be uncomfortable on the way back.
A pair of Red-faced Firetails added to a growing list and the New England Honeyeaters and Eastern Spinebills were padding their part. An opening to the left gave out onto a view over the eucalypt forest to the northeast. A raptor was soaring on the first of the thermals. It could have been a Little Eagle, but the rising currents were strong and it was up and gone into the sun before I could get a good look. 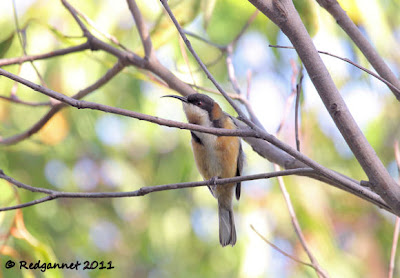 At the top of a steeper slope, I stopped to reconsider my position. I had brought provisions so I indulged myself with some carrot cake while I pondered. There is nothing a chap can’t do given an adequate supply of carrot cake, but I was beginning to doubt my sense of distance and the heat was becoming uncomfortable. It occurred to me that despite horrific flooding to the north, the Sydney area had been quite dry and the likelihood was that the waterfall would be dry too. The thought of pushing on to a dry rock face and making the return journey longer and steeper into the bargain seemed pointless. But I felt sure that I must be nearly there, so fortified with carrot cake, I committed to 15 minutes more. At the bottom of the slope, I crossed a dried up stream and realised that my walk had been in vain.
Just for the hell of it, I wanted to see if any water was held in pools at the top or bottom of the falls. The trail was now a single file path and it led over a concave splashback that must have seen a lot of water over the millennia, but none recently. A small bush camp just beyond it gave out onto the top of a high cliff which would have been the site of the sought after Olooru Falls (Google Earth ref; 34 06' 29"S 151 02' 18"E). It was a beautiful setting and there was indeed water in some shallow pools and there were dragonflies. 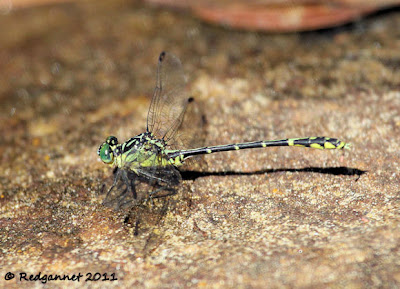 Fiery Skimmers that I had first seen yesterday in the Botanical Gardens were recogniseable, a very common species of predominantly green dragonfly was not. I cannot find an acceptable identity for this chap, though a Western Island Hunter looks quite close. Another large ode escaped me and the camera without being identified. I waded through a couple of the pools taking pictures, but the thought of the return journey kept nagging at me.
I didn’t stop for long. Old Man Time had pushed the sun high into the sky and I steeled myself for the yomp back. As I returned through the bush camp a small brown bird on the ground by some rocks caught my eye. It was a Rock Warbler, or Origma. 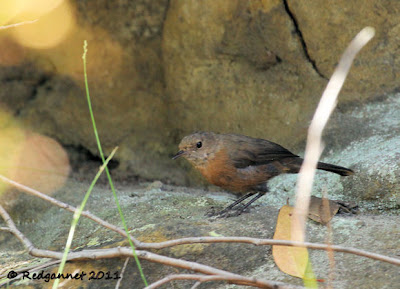 Occasional patches of shade gave me somewhere to stop and get a break from the heat. During one stop, some firetails came down to the edge of the track. I was mostly ignoring the birds now, but these looked slightly different, so I had a quick peek and noticed the blue eye of a Beautiful Firetail. 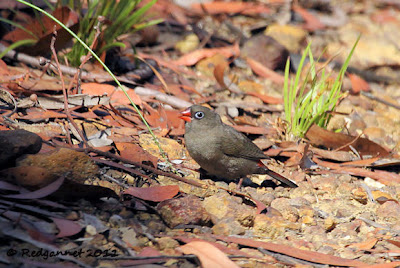 The hike back was all that I feared. It was hot and uncomfortable, but from about a kilometre away I could see the station and knew that the drinks machine there would well chilled in the Australian fashion.
The walk out took 3 ½ hours and 1 and ¾ on the way back. The Illawarra Line passes through Sydney downtown and on to Bondi. Martin Place is a good station to access it from. The first train leaves from Martin Place heading south at 05.06 (weekday) and the return fare is Aus $12 (@ Aus$1.60 = £1). The journey takes just over an hour each way.
Bird species; 25
Yellow-tailed Black Cockatoo 3, Sulphur-crested Cockatoo 4, Rainbow Lorikeet 80, Crimson Rosella 2, Laughing Kookaburra 3, Welcome Swallow 5, Willie Wagtail 1, Grey Fantail 1, Leaden Flycatcher 6, Superb Fairywren 4, Rock Warbler 1, White-browed Scrubwren 1, Brown Thornbill 4, Striated Thornbill 2, Yellow-faced Honeyeater 1, White-eared Honeyeater 1, New Holland Honeyeater 35, Eastern Spinebill 12, Red Wattlebird 8, Brush Wattlebird 12, Australasian Magpie 2, Australian Raven 2, Common Myna 2, Beautiful Firetail 6, Red-browed Firetail 15.