What would I do without G.L to keep me in fresh new ideas for places to see and things to do while nursing a hang-over? It was not his suggestion that Alexandria Mills, Plurimusdecorus inorbis, be entrusted to my care for the evening, but we managed to make up for that oversight and the normal beer per lifer applies for the rest of the post. 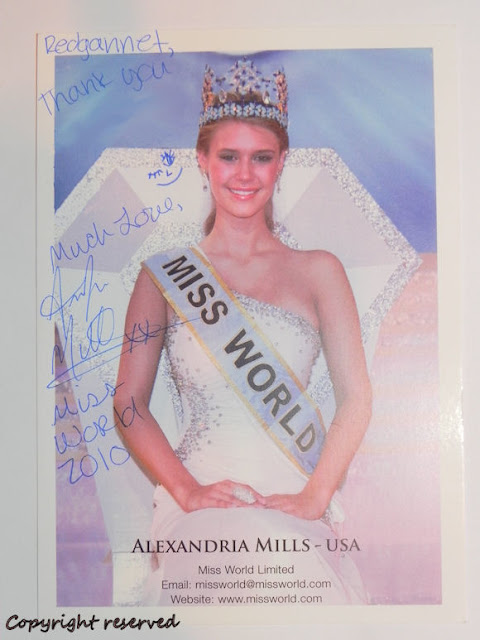 His latest recommendation was hardly a good second best to an evening with the reigning Miss World, but I have a blog to write so I took his suggestion for a morning at Bang Pu.
Bang Pu Mai is a nature education centre south east of Bangkok which attracts roosting birds who might otherwise be feeding on the estuary of the river (Google Earth ref; 13 31' 02"N 100 39' 18"E). Facilities include a pier which attracts people who enjoy the spectacle of hundreds, nay thousands, of Brown-headed Gulls and gulls which enjoy the spectacle of people throwing free food. 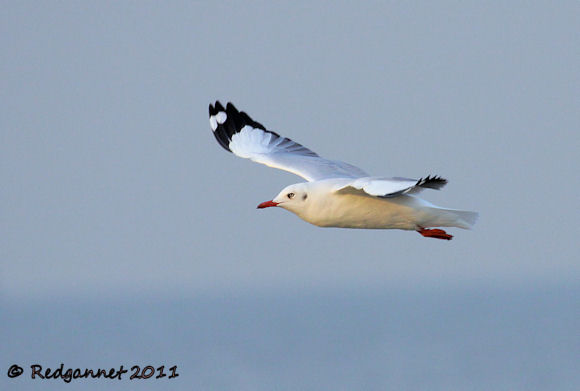 Occasionally a Pallas’s (a much bigger dark-headed gull) or Heughlin’s Gull (large, classic gull) might put in an appearance, but I was not prepared to put in the effort or attention to detail required until the beery feeling from the late night had worn off. 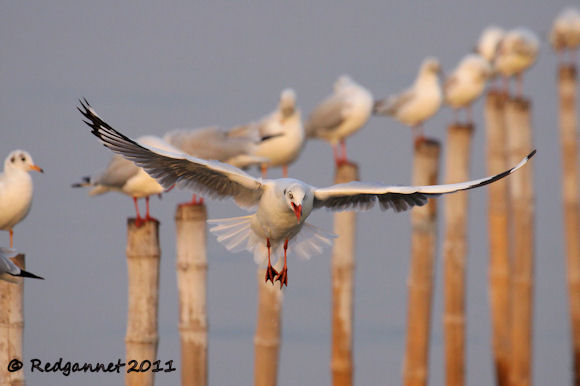 A mangrove and shoreline restoration project is ongoing there. Bamboo pilings have been set into the mud to help the silt to settle and mangrove spears have been planted in anticipation. The gulls use the bamboo on both sides of the pier as roosts and Little Egrets stumble along the in-shore line of defence. 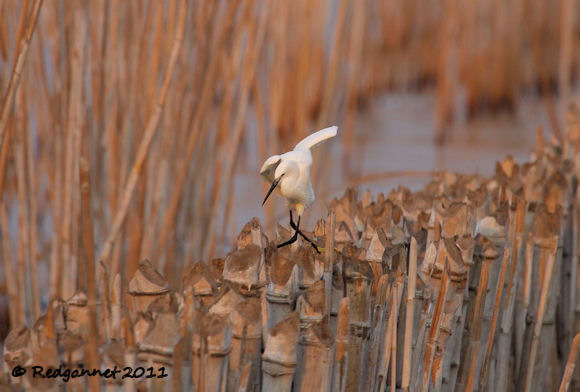 Back on land, through a gate to the left as you approach the pier, a sea defence protects a sanctuary of mangrove with ponds, paths and hides. The tide is allowed to sweep in and out and as I arrived this morning, it was approaching its high mark. 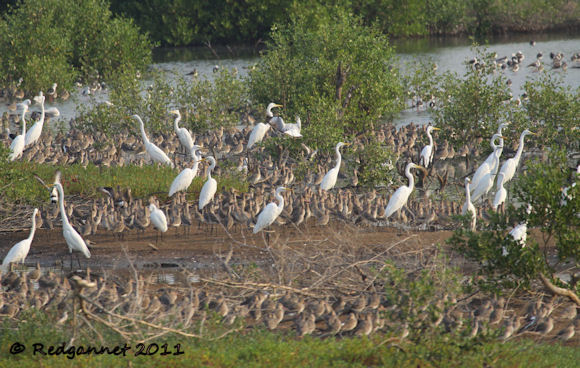 A hide overlooking a scrape looked like a fine place for a nap until I noticed the sloughed snakeskin hanging from the rafters above me. Once my eye was in, I began to notice more skins, five altogether and began to sober up a bit. The only sign of live reptiles were the large Geckos, but I couldn't help glancing up now and then. 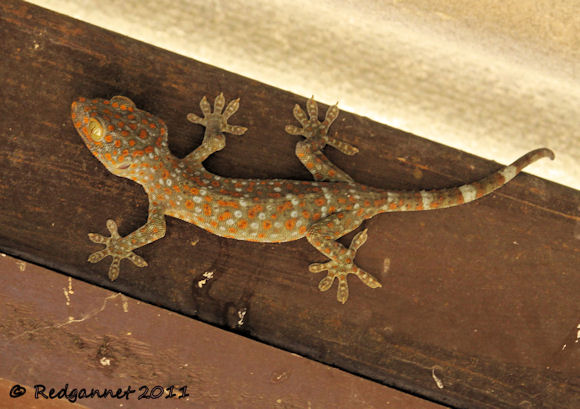 Waders and herons were abundant with Black-tailed Godwit making up a large proportion. Dense flocks had come to roost and were joined on the mud scrapes by Common Redshank, Marsh Sandpiper and Black-winged Stilt. Pacific Golden Plovers were more widely dispersed among the salt grass. 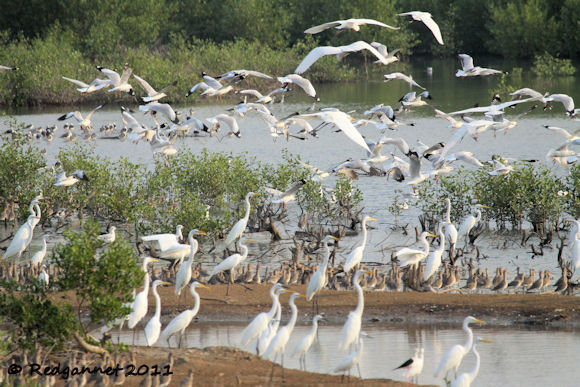 The mournful, sibilant, descending phrase of the Flycatcher is easy to imitate and the bird responds well to it. Also known as the Golden-bellied Gerygone, it was simple to tempt the little bird out of the mangroves for a look, but photographing it proved more tricky.
Another call (one that put me in mind of the introduction to ‘Boogie Wonderland’ (Earth Wind and Fire, 1979, just in case you haven’t heard this pop milestone which peaked at no. 4 in the UK single chart)), came from the Mangrove Whistler. The call was easy enough to imitate, but the bird did not respond (so perhaps it was not as easy as I thought). One was calling from a small patch of mangroves behind the visitors centre. I saw movement from the apparent source of the song, but by the time I got the Bushnells trained on the spot, he was gone. There were some Pied Fantails in there with him and that was enough to sow doubt and so I have to decline this one. 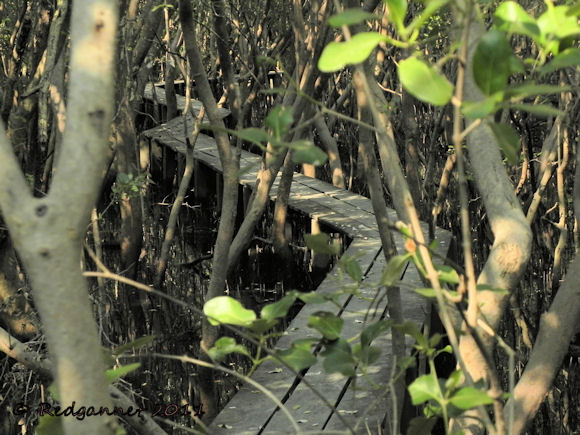 The observation tower and part of the board walk are out of service at the moment. The remainder of the boardwalk has not been well maintained and I wonder if it will be reinstated. There is groundwork underway to improve drainage and facilities, so hopefully a new and improved mangrove experience is around the corner. 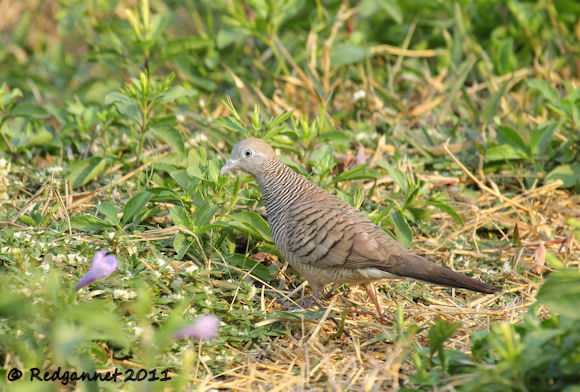 Close to the entrance is a dry area with a vegetable garden and a small meadow with wildflowers. Zebra Doves fed from the ground as Streak-eared Bulbuls called from the acacia-like trees.
There were dragonflies here too. A nice selection will be added to my life list just as soon as I figure out what they are. 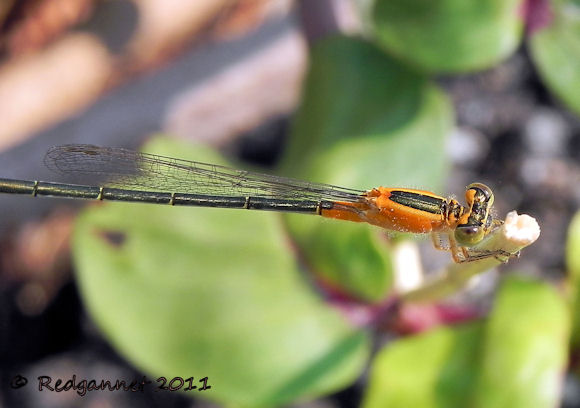 This damselfly, I believe, is the orange form of the Common Bluetail, Ischnura senegalensis, but I have yet to find an ID for this fine fellow below. For want of anything better, I shall call him a Dancing Dropwing, Trithemis pallidinervis which I have seen before in Singapore and looks very similar. They were very common along the sea defence wall on the seaward side. 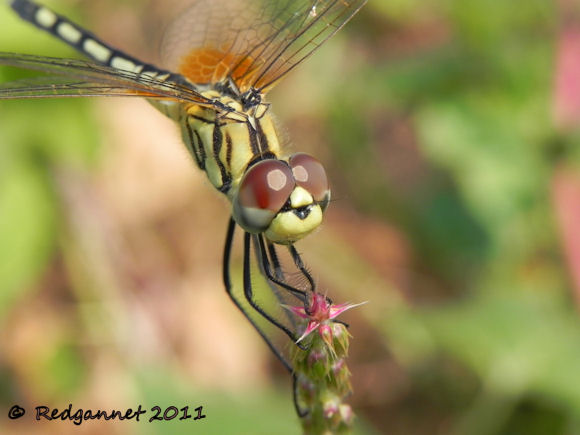 A few Crimson Darters, Crocothemis servilia were about, but did not allow me as close as the species above. They preferred the mangrove side of the sea defence. 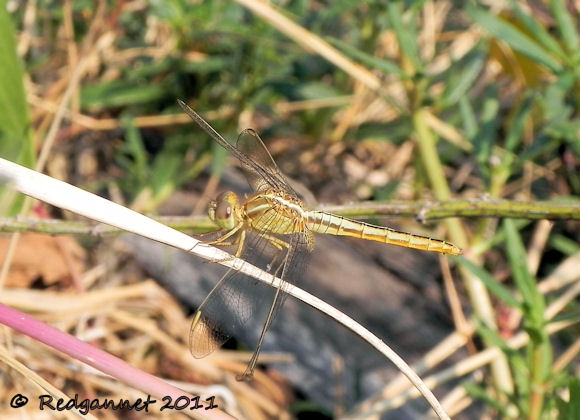 The species below I have no idea about and cannot find anything as a suitable match. I will have to consult the experts and I hope that I will be able to come back to confirm the identities. It has a number of features in common with the darter, but niether its thorax, nor abdomen carried any markings and its appendages are quite different. 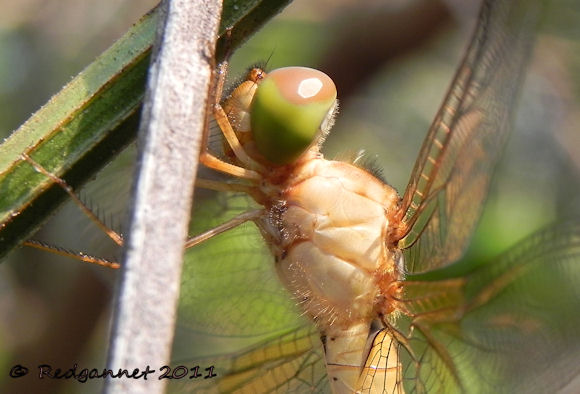 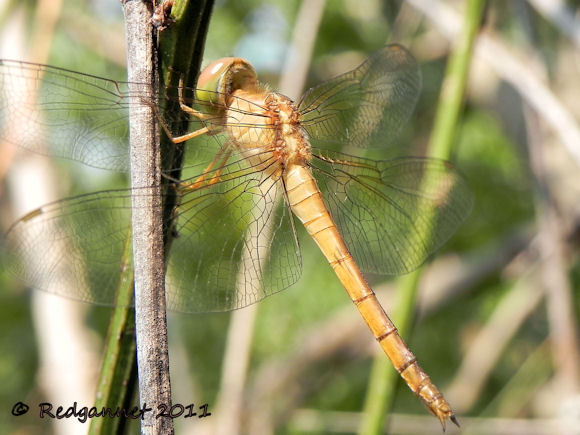 The salt extraction ponds of Pak Thale offer day-long feeding opportunities, so the birds are less tide dependent than most waders. The tide at Bang Pu Mai obviously has more of a bearing on the birds’ feeding habits. By mid-morning, the high tide had started to recede and small exploratory flocks of godwits were making sorties from the scrapes to see if any fresh mud had been revealed. They would return shortly afterwards and wait for a few minutes before taking another look. By the time I left at about 11.30, the traffic was all one way. Tide times may be critical as the mud banks of the estuary are off the reserve and not visible. There is plenty of mud beneath the pier, but the big numbers of birds spread out quickly and the sun will affect your view.