Lumphini Park in Bangkok City was not part of my planned day as I set out, but after 4 taxis who couldn’t find their own bottoms with both hands, we drew alongside it and I bailed out before it got dark. It turned out to be a pleasant park of about 100 hectares and obviously well loved by the Bangkok populace.
I came in through the entrance guarded by the imposing figure of Rama VI, opposite the Dusit Thani Hotel by the Siam Station of the Metro (Google Earth ref; 13 43' 48"N 100 32' 16"E). 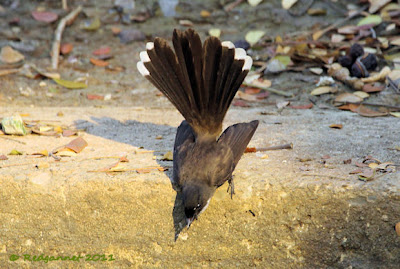 A small canal to the right of the gate held a Little Egret and and a Pied Fantail extravagantly chasing down tiny evening insects. The canal led along the park railings and was the only place in the park that looked a little unkempt. A very common Asian Amberwing, Brachythemis contaminata was keeping guard over a female that was depositing eggs on a saturated log floating in the water. 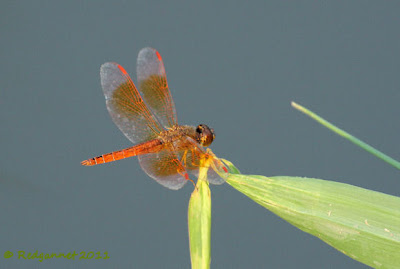 The lawns are dotted with trees and a few common species such as Asian Pied Starlings and White-vented Mynas can be found there. 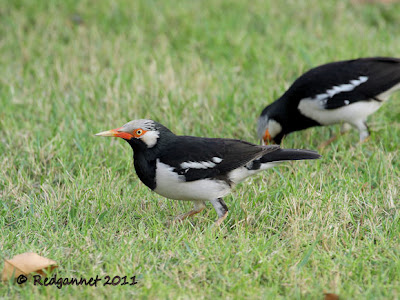 In bigger trees along the paths, Black-naped Orioles and Streak-eared Bulbuls were seen. 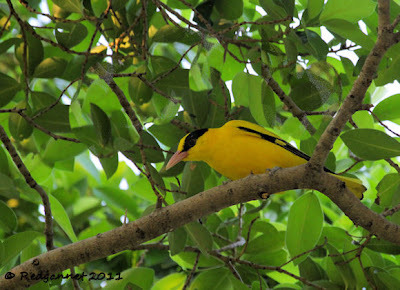 The lakes in the park are all surrounded by concrete banks. I had hoped to do a little dragonfly watching, but the habitat was not very conducive to perching odes. The Bangkok public can avail themselves of the paddleboats that are for hire, but there were no birds at all on the water. 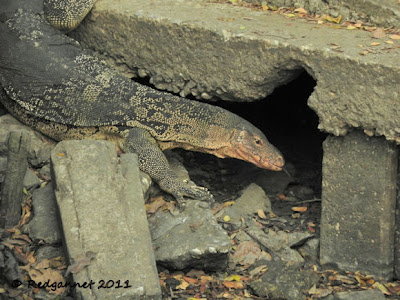 A huge monitor lizard which easily measured 6 feet long has made a lair beneath one of the bridges that criss cross the connecting canals. 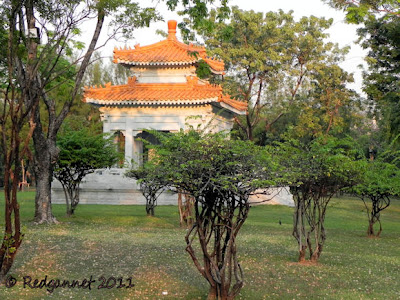 I trip, trip, tripped over the bridge to a hot-spot near a little pagoda behind the sound stage. Here were, Yellow-browed Warbler, Asian Brown Flycatcher, Brown Shrike, Scarlet-backed Flower-pecker and Coppersmith Barbet. 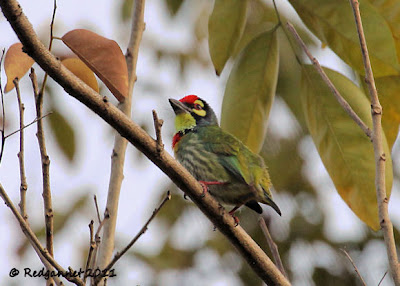 At 6 o’clock a public address system counted down to the National Anthem. Such is the esteem with which the people regard their King, that everyone from joggers to canoodling couples stopped what they were doing and stood in reverence. I joined in for fear of appearing disrespectful to their monarchy. Even the Large-billed Crows, that appeared to be flocking in from the surrounding metropolis to roost for the night, quietened.
Lumphini Park has a visible security presence and everyday people were doing everyday things. It seemed to be a safe and enjoyable place to be and a nice place to spend a couple of hours close to the city centre.