Birding in San Francisco throws up a few options and today’s post features the Palo Alto Baylands. The area is noted for Burrowing Owls and Clapper Rail, but don’t get your hopes up as I didn’t find either of those. 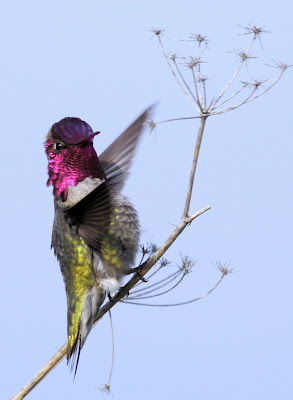 Anna's Hummingbirds were plentiful though.
35 miles down the bayside from San Francisco City, the salt marshes were shrouded in fog this morning. I skipped back and forth between sites trying to make the best of a late start and a midday tide. There are 3 favoured sites in Palo Alto. Turning off from Freeway 101, take Embarcadero for Lucy Evans Interpretative Centre and boardwalk.
San Antonio is the off-ramp for Charleston Slough (rhymes with blue). Finally, turn off at Shoreline Blvd for Mountain View tidal marsh. 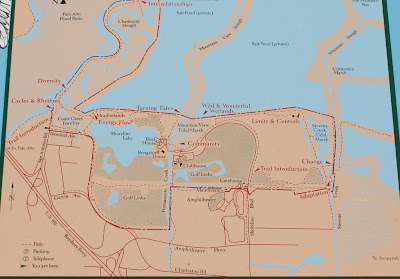 I wanted to be at the boardwalk 2 hours before high tide so visited Mountain View first to look for Burrowing Owls. It was the furthest of the three sites.
At the end of Shoreline Blvd. is plenty of parking with a lake and a golf course on the inland side and a tidal marsh and protected area on the bayside. Cycle and jogging trails double as birder paths and give dry, flat access and views of the sloughs. The protected area is set aside for the Burrowing Owls who like to take vacant possession of California Ground Squirrel’s holes. The owls are shy and drop back into the burrows if approached. This was a Saturday morning on the first day for weeks without rain. Even by 08.30 it was busy and I suspect the owls were laying low.
I visited here twice during the day but shall amalgamate the two visits seamlessly as if one. 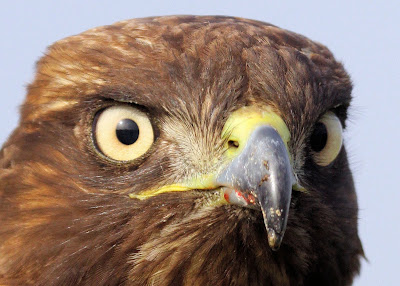 A juvenile Red-tailed Hawk was very approachable and allowed me to get close enough to see what he had had for breakfast. An Anna’s Hummingbird was performing display flights, rising 20m into the air and power-diving, pulling up to form a clearly defined J-shape, then rising again to repeat the display three or four times. 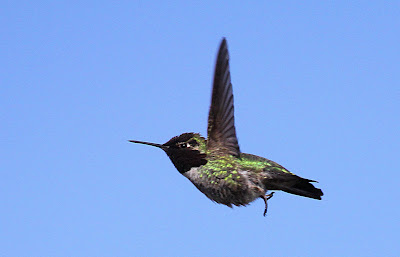 A still photo can’t convey the drama. I keep considering video but how much can I actually carry? In case you are wondering, this is not a picture from during the display. That was beyond me.
Out on the water were Ruddy Duck, Shoveler, and Greater Scaup. On the distant sloughs were more Shoveler and some Brown Pelicans. There were a few Great and Snowy Egret on the edge 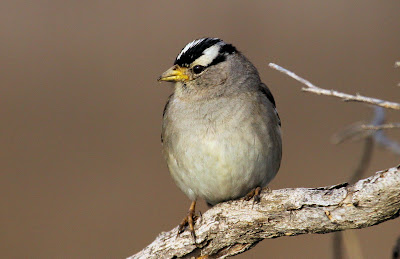 of the water and Golden-crowned and White-crowned Sparrows in the scrub.
Canada Geese were grazing on the protected area where I was scanning for the owls. A Northern Harrier sailed into my vision but I thought a goose was possibly a big target for her. Instead she landed just ahead and took a drink from a puddle. 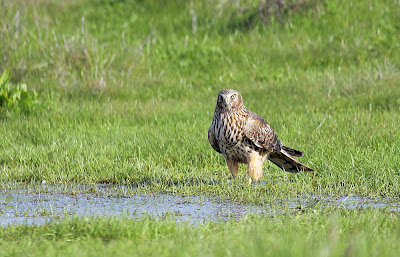 Anticipating that she might give me a fly-by, I switched my lens stabiliser to panning mode and the camera to Servo AF to keep a moving object in focus. I was pleased with the result. 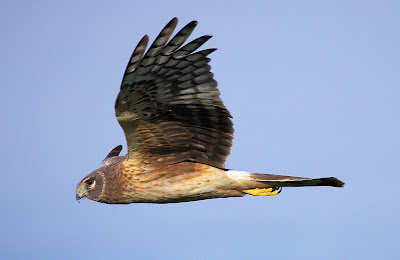 A small mixed flock of House Finches, Western Bluebird and Yellow-rumped Warbler greeted me back at the car park.
The fog was still fairly thick when I arrived at the Lucy Evans Interpretative Centre at the end of Embarcadero and I saw a fogbow for the first time. It is a similar principle to a rainbow I suppose, but you dry out more quickly afterwards. 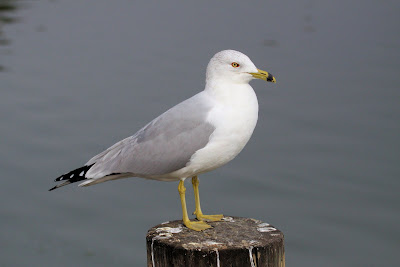 A pond there was hosting some Ring-billed Gulls with approximately 200 Bonaparte’s Gulls on the slough across the road.
An area by the centre has it’s tidal flow restricted in both directions thus giving high and low tides about two hours later than the slough beside it. A dyke-like, raised path runs between the managed slough and the pickleweed marsh. In a scene reminiscent of one I had witnessed a few weeks ago, all the wading birds took off as an ibis flew over. 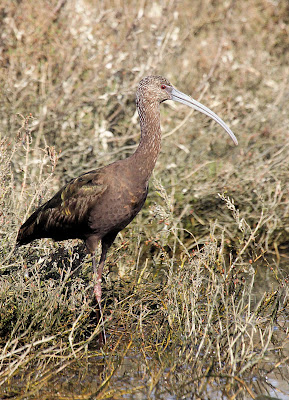 I thought it was a Glossy Ibis until a fellow camera-toting birder advised me to be on the lookout for a White-faced Ibis. The mistake was understandable I am sure you will agree. It was the red eye that swung it.
From some reeds nearby, the strident song of a Marsh Wren rang out, I recorded it singing and played it back resulting in the bird showing itself at the top of the reeds. 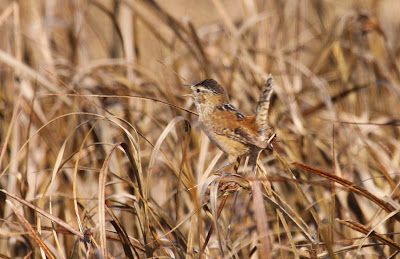 Beyond the Interpretative Centre is a boardwalk that pushes out into the tidal marsh for about 400m or so. This is the favoured rail area and it has produced Virginia and Clapper Rail for this blogger in the past. The end of the boardwalk was obscured by fog until I tried to take an artistic photo, when the mist miraculously lifted. 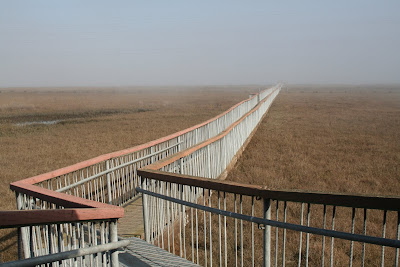 My theory was that the high tide would flood the marsh and push the rails up into view. For future reference the tide needs to be higher than today’s 2.5m to achieve that. There were plenty of Song Sparrows though.
The managed slough was busy. 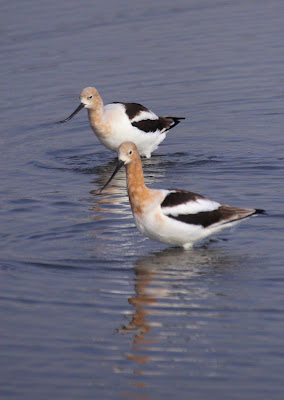 American Avocets were starting to attain their summer plumage. Short-billed Dowitchers were taking advantage of the delayed tide with a single Long-billed Curlew.
The natural slough was the most prolific spot at this site. Teal and Shoveler were present as well as other ducks, waders, egrets and that flock of gulls. At the far end of the car park is a boat ramp. 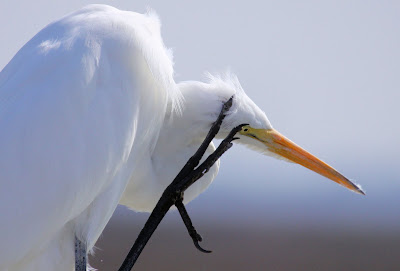 A great Egret was preening.
The day was warming up now and the fog had lifted.
In between the two sites already mentioned, at the end of San Antonio Rd, is Charleston Slough. Right beside the parking area is the Coast Casey Forebay. This was a popular roosting place for American Avocets, about 2oo of which were waiting out the high tide. 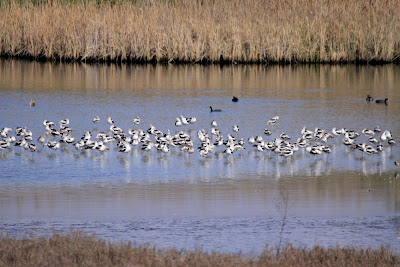 Also here were Greater Yellowlegs, Black-necked Stilts, American Coots and a small selection of duck. I took the path which led out between the slough and Adobe Creek. On the left was a viewing platform for the creek. Cinnamon Teal, a Double-crested Cormorant and a few Black-crowned Night-herons were all roosting among the tall reeds. On the other side, another platform looked up the length of Charleston Slough. A small island in front of it was providing roosting space for 3 Black Skimmers among the gulls, Marbled Godwits and the Willet. 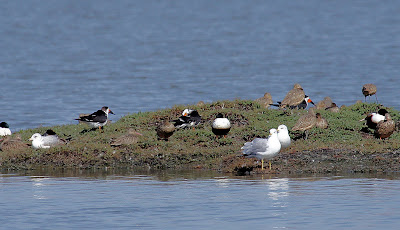 There were dowitchers too, but I couldn’t tell which one from that distance.
The trail reaches nearly two miles out into the bay. Further on, the creek opened out into sandbanks and shallow water. Clustered around any bits of debris on the sandbanks were mixed flocks of Western and Least Sandpipers. Small flocks of 50 or so huddled around sticks and logs, preening and resting. The least seemed to be the most here.
Among the other bird were ducks, egrets, coots and Common Moorhen. Out in the deeper Charleston Slough were even more Shoveler. Good numbers of Canvasback, Ruddy Duck and scaup were present too.
A lake close to the parking lot held Surf Scoters, Common Goldeneye and a high concentration of Pied-billed Grebes. 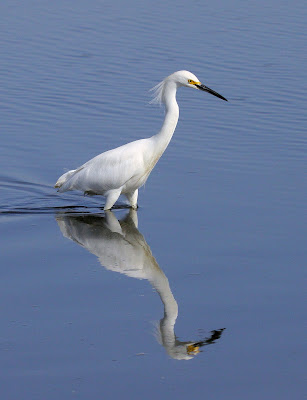 Snowy Egrets were winkling mussels from the beds on the edge of the lake.
By now the warmth had gone from the air. The sun was dipping towards the horizon and the tide was reaching it’s lowest point. I pulled in to the boardwalk on the way home to watch the sun go down over the curlew. 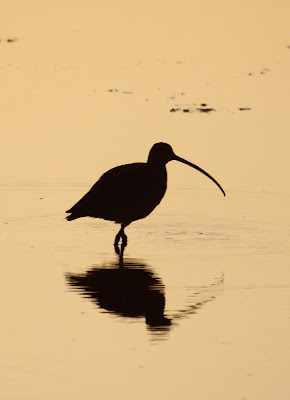 A large flock of tiny peeps that I assumed to be Western Sandpipers flashed in the sun’s last rays of the evening.

My plan to set off early in the morning was thwarted. I had mistaken a past favour for standard practice at Reliable rentals. If you wish to set out early, you can rent a car from Reliable and take advantage of their free parking. Rent the night before and set out from their garage when you wish. Returning the car after 17.00 will incur a second day charge.
This works perfectly if you are renting for more than one day, but becomes expensive for just one day.
Alternatively, Budget next door are open from 06.00 – 21.00 7 days a week.