Today’s imperative was to snatch a couple of hours out before the storm hit. A big tropical depression was headed towards the island as we landed into Mauritius and was predicted to make landfall shortly after lunch.
“Sleep can wait, I’m going birding.” With the rallying cry of Charlie from http://www.10000birds.com/ ringing in my ears, I got changed and went straight out.
Birding in Mauritius would usually take the form of a trip to Black River Gorge in the southwest of the island to look for endemics. This would not be feasible today with such a limited weather window, so I opted for the easy ride of SSR (Sir Seewoosagur Ramgoolam) Botanic Gardens at Pamplemousses.

10 minutes walk from Caudon Waterfront found me at the bus station. From there, bus 22 heads to Grande Gaube via Pamplemousses and stops right outside the gardens. Half an hour and MR23 (@MR50/£1) later, we arrived at the impressive entrance gates. A fee of MR25 is payable.
A comforting security presence was visible, Indeed, I had one guard all to myself as he followed me around, curious as to what I was up to. After each series of photos, he would like to see the results and offer his appraisal. Mostly security was discrete.
Immediately inside the gate, the trees were alive with birdsong mostly that of the Common Myna (introduced), 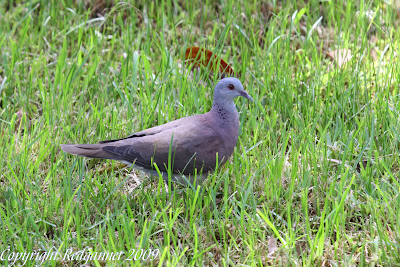 but the Madagascar Turtle Dove (introduced) was also keen to make itself heard. Red-whiskered Bulbuls (introduced) were another obvious resident. 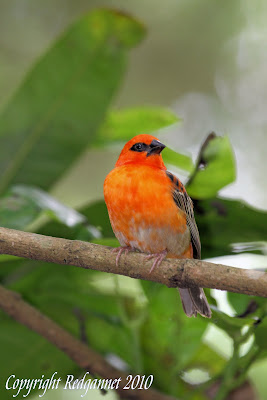 My first birdy picture came in the shape of a Madagascar Fody (introduced). I do not recall them being quite so approachable before. Even though the flash has washed him out a little, he is still a splendid bird.
The gardens cover an area of 37 hectares and are mostly laid out in an informal style with few straight lines. The most popular attraction is the giant water lily pond. Victoria Water Lilies cover a rectangular pond. At over a meter across and with turned up edges, they looked like giant round trays and were easily able to support a juvenile Green-backed Heron 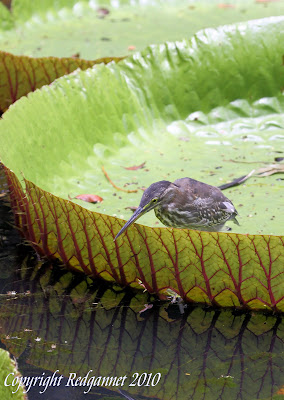 that used the raised edges as cover when stalking. It was watching some dragonflies that had caught my attention too. See www.redgannetsdragonflies.blogspot.com for the odonata of Mauritius.
The water lily pond brings in the crowds and the curiosity that I try so hard to avoid, so I moved on. Despite that, the gardens were reasonably quiet for a Saturday.
At the nearby lotus pond, a Scaled Munia (Spice Finch (introduced)), was heaving nesting material into a palm. I do not know what stage of the breeding year February in Mauritius would represent. The island is 20 degrees south of the equator, so the sun had by now returned from the Tropic of Capricorn to the Northern sky as it heads all too slowly towards the Palaearctic spring. Mauritius does not have a marked monsoon but between January and April, it becomes very hot and humid with squally depressions.
A picturesque lake with islands and sun/rain shelters is the largest body of water in the gardens. A Common Waxbill (introduced) climbed the seed-heads of some tall grasses. 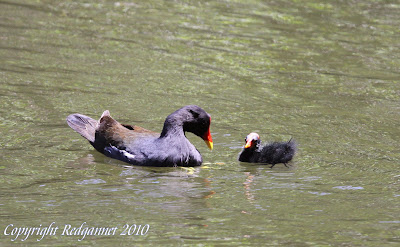 Out on the water, a moorhen fed it’s chick and the nests of village weavers (introduced) were waiting inspection by the females.
At last, I found a bird which was the only endemic likely to be seen beyond the south-west part of the island. 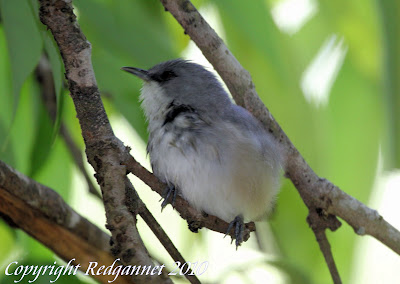 The Mauritian Grey White-eye is unusual among white-eyes in that the white eye-ring is very inconspicuous. It is like the rest of it’s family though in disliking staying still while being photographed.
The sun had passed it’s height of the day but the promised cyclone had not materialised. The heat was starting to take it’s toll on this tired blogger and I needed a few moments to myself in the shade. 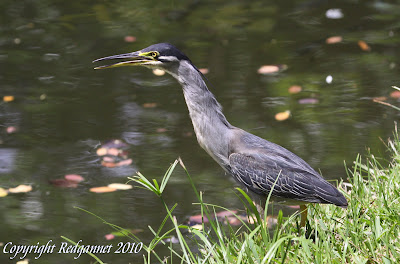 I found a nice palm near a heron to settle beneath only to be startled by a Mascarene Swiftlet whistling past my ear to scoop a drink from the lake. Another one joined it and they made two or three passes each, pale rumps plainly visible, before climbing up and away. 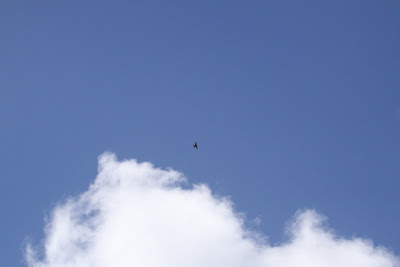 I realise that you need to be in the right frame of mind to photograph swifts. It is a thankless task.
As a special treat on the way home, we found ourselves flying over the wonderful looking Aldabra Atoll. 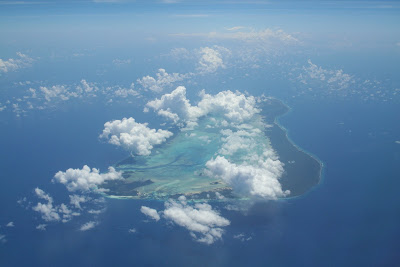