On my own doorstep.

I found myself with a couple of hours to spare. The Mrs was away, the boy didn’t need to be collected from school ‘til 3.00, what to do?
The sun broke weakly through the clouds and made up my mind for me. In the middle of the day, I wouldn’t usually expect too much, but I would see more than if I stayed in watching “Tricia”. So I decided on a couple of hours in Mote Park.
Imagine how pleased I was when I caught sight of a Water Rail at 13.00. Normally crepuscular in habit and shy at best, I was delighted to see even the back end of one disappearing around a bend in the River Len. 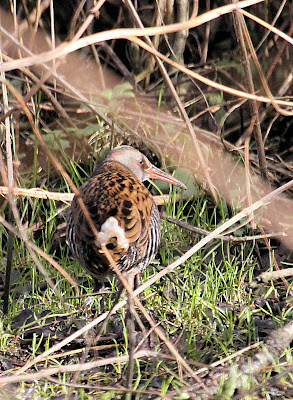 I had started from the Willington Street end, crossed the first bridge and snooped around the alders. There was plenty of activity and lots of birdsong. Perhaps spring was coming early. Tree Creepers, Nuthatches, Blue, Great and Long-tailed Tits were all calling and feeding busily.
Crossing back over the bridge, I caught sight of the white tail of the rail. It seemed unperturbed by dogs nearby and was moving downstream. I left a wide berth and tried to get in front of it.
It was possible to see it better now and I noted that the bill was mostly dark, perhaps indicating a young bird. It probed in the soft, wet ground on the southern bank between the two bridges and didn’t seem to mind me being there. Despite it being approachable, it was not very photographable with the surrounding undergrowth confusing the auto focus.
Only when it returned to the river bank did I get a relatively clear shot. 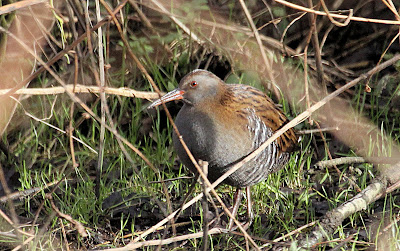 It disappeared for a while into some thick vegetation. I could tell that it was still there from the splashes and ripples in the river and occasional glimpses as it bathed. I moved on intending to re-visit on the return journey.
On the tiny island in the main lake, just beyond the weir, a Greater-spotted Woodpecker was excavating a hole.
The rest of the visit was relatively uneventful until I met another birder with a camera looking for rails. He was a blogger too at http://www.greenieinthewild.blogspot.com/ He told me that Simon, the Mote Park blogger, had seen 3 rails and a Jack Snipe earlier in the week! That rather took the wind out of my sails.
I checked up on Simon as soon as I got home and there, with pictures, was Lymnocryptes minimus. I have been home all week and a lifer has been camped on my doorstep without me knowing. That will teach me to keep a closer eye on events at home.
If only Wayne Bridge could do the same, we might still have an England football captain.