Walter Sisulu Botanic Gardens nestle beneath a rocky bluff in a well-heeled, well-guarded neighbourhood in the western suburbs of Johannesburg. Its finest feature is a beautiful waterfall that cascades down the face of the cliff, providing protection on one side for the nest of a resident pair of Black Eagles.
Being a Sunday morning, I expected the gardens to be busy, but the early morning chill of July kept the gardens quiet for the first couple of hours until the sun had time to warm the air. 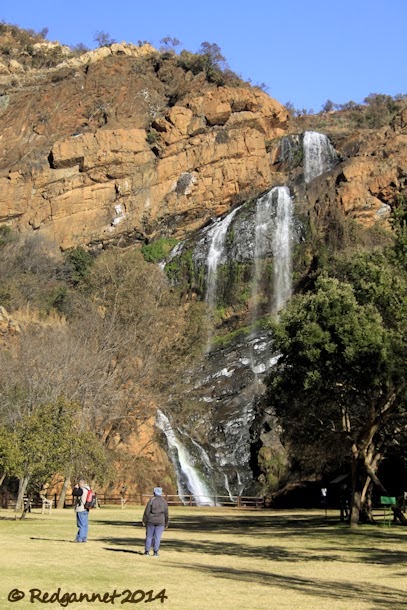 A small flock of Speckled Mousebirds were perched in a leafless bush soaking up the warmth from the early morning sun. I noticed that they were all perched legs apart, exposing their bellies and breasts to the sun. Is this simply a more efficient way to warm up that the mousebirds have found? Answers on a postcard please. 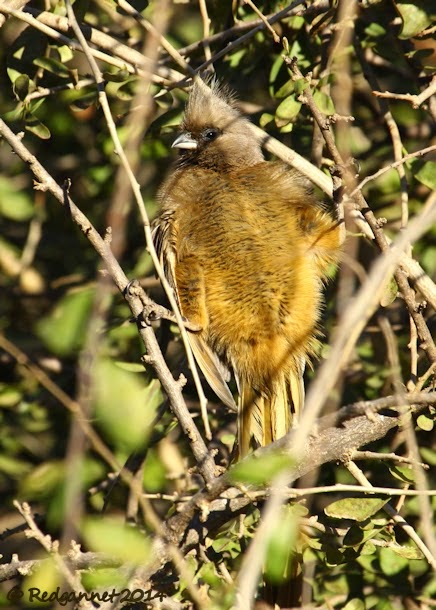 I arrived a few minutes before the opening time of 08.00 and had to wait on the street outside until the gates were opened. The car park is worth exploring before venturing into the gardens and brought Southern Boubou, Fairy Flycatcher and Karoo Thrush before I handed over RSA 35 (@RSA 16 = £1) to enter. 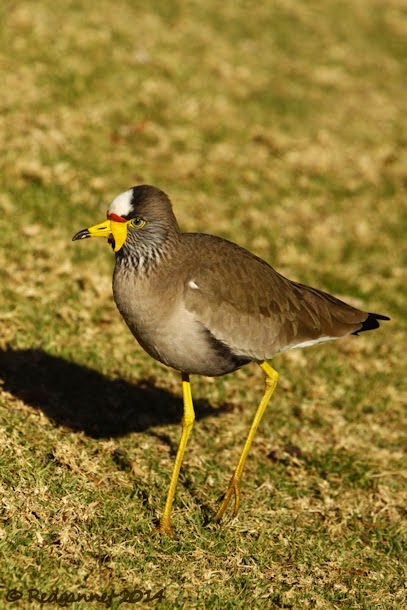 I was greeted by an African Wattled Lapwing on the lawns just inside the gate. Further up the slope a Spotted Dikkop skulked like a petulant teenager with his hands in his pockets. 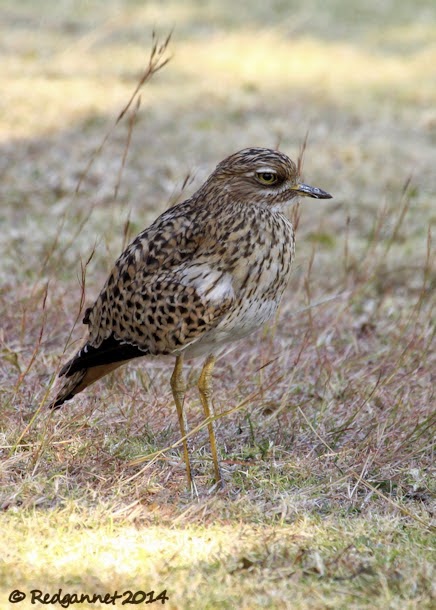 The main body of the gardens are to the south of the gate and I followed the path towards the waterfall which could be seen as I walked along.  Little side excursions brought Helmeted Guineafowl, Cape Robin Chat and Grosbeak Weaver. A Bokmakerie slowed my progress as it posed on a small patch of lawn. 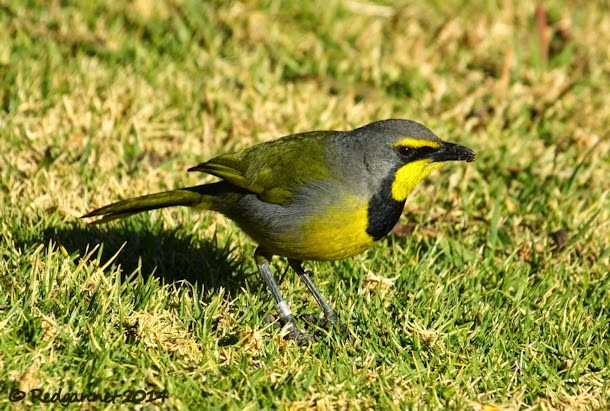 The eagles were tending to a chick during this third week of July and the eagle-watchers had set up a stand with a scope, information on the pair, their history and breeding success of previous years. They kept notes on the comings and goings and were able to update anyone who was interested, on the birds’ breeding progress so far this year. 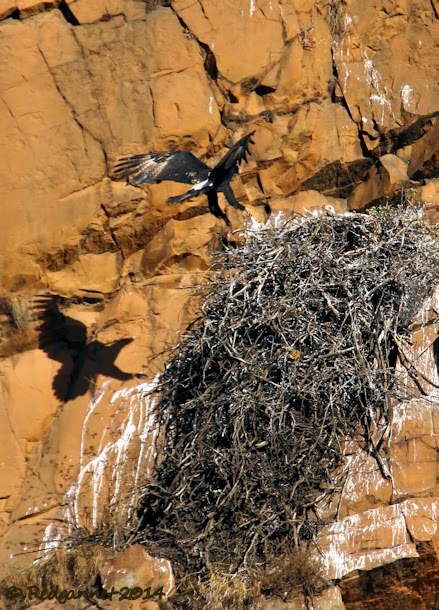 My attempts to capture decent photos were not very successful despite many, many shots fired. The intent at the back of my mind for a 10,000 Birds post featuring the eagles may have to wait until I have mastered this photographic lark. Nevertheless, a couple of useable ones came out as the male (I was reliably informed) glided across the face of the cliff, harried by Pied Crows that leapt into flight every time the eagles took to the air. 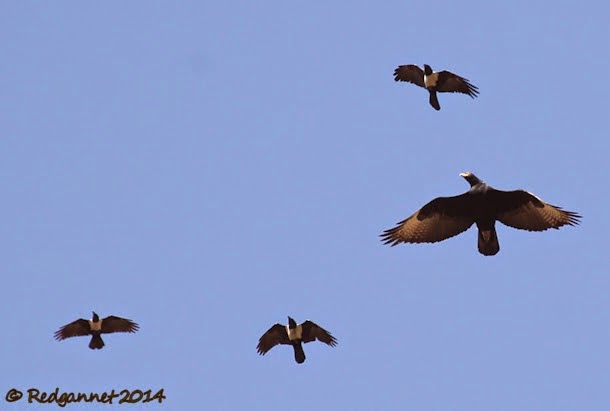 If you prefer better picture quality, try the live eagle cam mounted on the cliff, close to the eagles' nest.
The female (again I am relying on local knowledge) remained on the nest and the chick could be seen over the edge of the structure when it sat up.
The male caught a Rock Hyrax as we watched, but I was surprised that he didn’t take it to the nest. Instead, he found a cliff perch and appeared to eat the dassie without any thought given to his partner or their offspring. 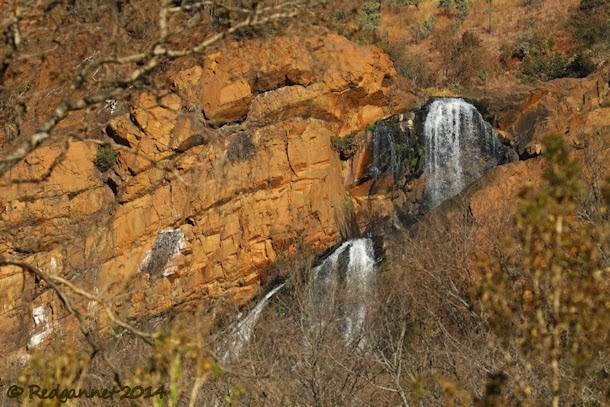 A trail leads up the slope to the right of the waterfall and a good vantage point can be found a little way up. It gives a better angle to view the nest and brings the watcher closer to the eagles’ early morning flight level as they cross the cliff before the thermals give them lift for soaring.

The trail leads to the top of the waterfall where signs advise people who need advising, that they should not throw stones at the eagles’ nest. The birds have actually moved nest sites to a position just beyond normal stone-throwing distance and with a ledge above to protect from the stronger arm. The new site for the nest is just out of view from the top of the cliff, but Rock Martins, Black-collared Barbet and Red-winged Starlings were seen while I was up there. 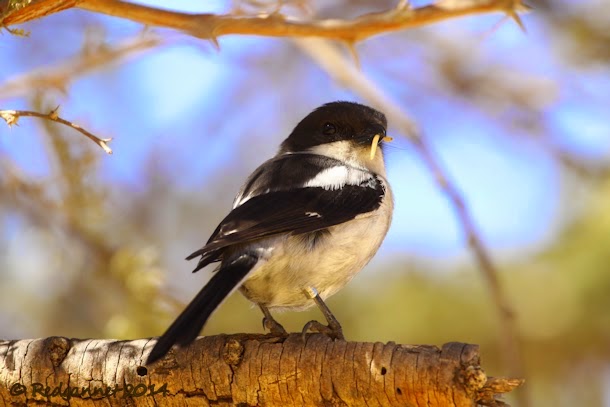 The trail then drops back down through acacia scrub towards the northern part of the garden. The acacia bushes are popular with Common Fiscal Shrike, Tawny-flanked Prinia, Bar-throated Apalis and Common Bulbul.
A hide overlooks a small dam at Google Earth ref;26 5 5.57S 27 50 36.85E. A Green-backed Heron hid amongst the grass at the edge of a small island in front of the hide. A Long-tailed Cormorant flew in and despite hauling up right in front of the heron, neither bird even acknowledged the other. 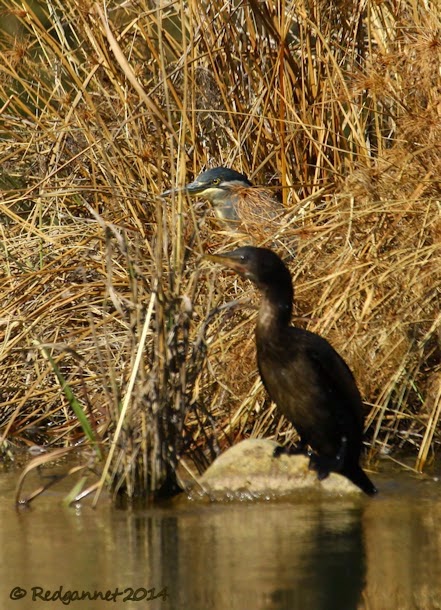 The peace was ruined by the arrival of a small flock of Hadeda Ibis. They flew into the tree beside the dam with a loud squawking and flapping. One dropped down to a dead snag in the water and gave a beautiful view of the sheen that can be seen on its plumage in good light. 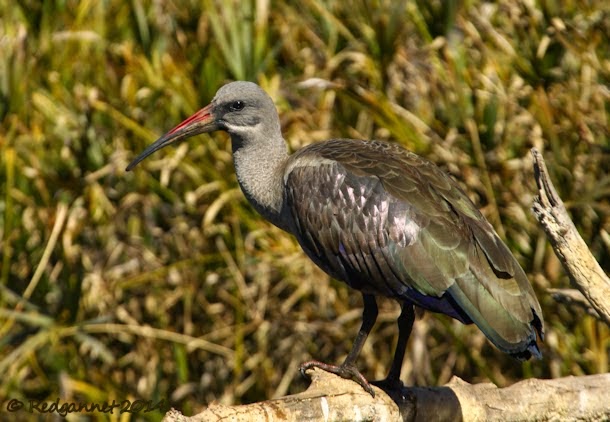 Walter Sisulu Botanic Gardens is open every day from 08.00 until 17.00 and costs RSA 35 to enter. Secure parking is offered in the marshalled, gated car park.
Facilities include toilets, restaurant and gift shop.
An open air stage at the lower end of the first lawn is the venue for musical evenings as the audience picnic on the grass. Event information can be seen at this link;
http://www.sanbi.org/events/walter-sisulu

Previous visits to Walter Sisulu Botanic Gardens can be seen at the links below;

Visit the dedicated Africa page for more posts from Johannesburg and South Africa.