A ribbon of mist followed the serpentine course of the Shenandoah River in the valley below the ridge of mountains that make up the Shenandoah National Park. It was a beautiful start to the day. The sun had risen to the east, but was still low enough to cast the shadow of the mountains across the valley. The many pull-outs allow motorists to stop and enjoy the tremendous views as farmland rolls away to the west and hills disappear into the distance on the other side. 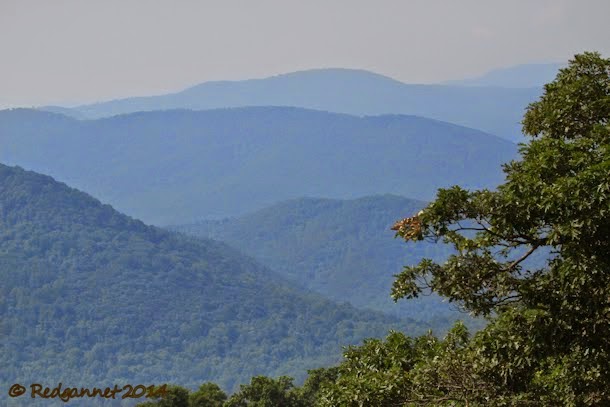 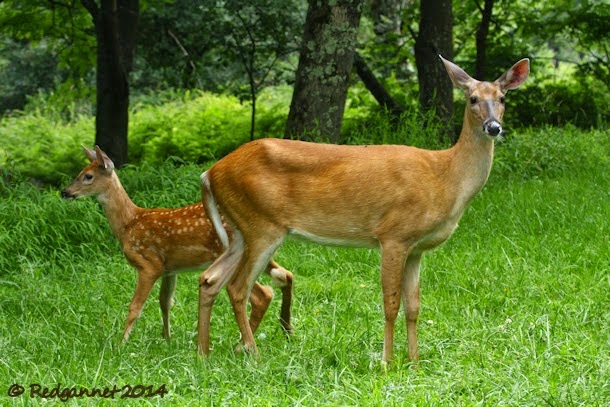 White-tailed Deer are common around the entrance and were seen for much of the morning close to the road. I stopped at Dickey Ridge Visitor Center to take a look around the area and found Eastern Towhee, American Goldfinch and Chipping Sparrow. 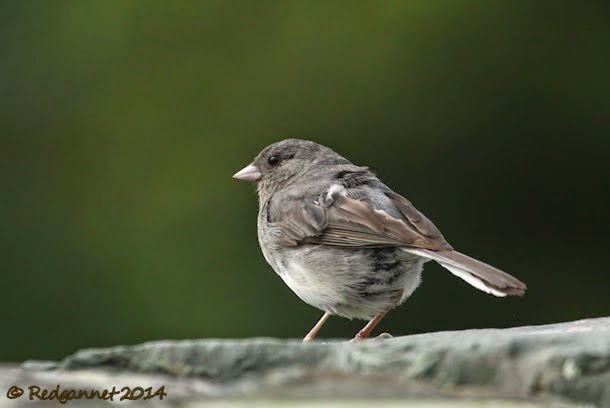 The pull-outs gave good opportunity to find birds and brought Dark-eyed Junco, Cedar Waxwing, Ruby-throated Hummingbird and Red-headed Vireo. But mainly, I stopped hoping that a bear might be feeding in a meadow cut into the hillside below the pull-out. 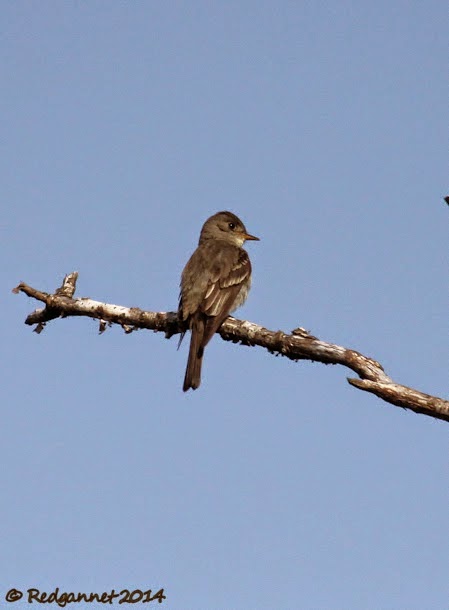 The sound track for the day was provided by the Eastern Towhees and Eastern Wood-Peewees. There seemed to be one or both singing every time I stopped. 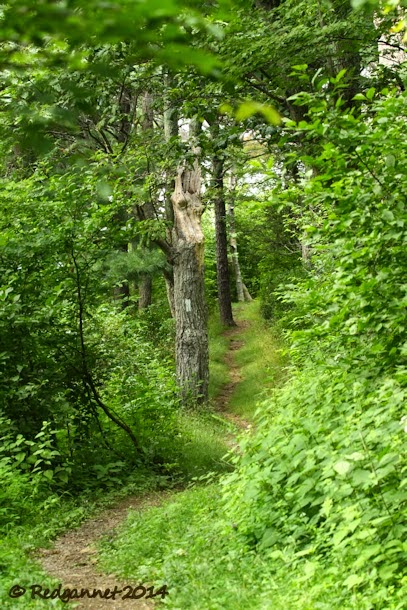 An Indigo Bunting stopped me with a flash of blue and I pulled in to a trailhead parking lot. A Hooded Warbler popped up and gave me my first look at a fully hooded bird. Short walks onto the Appalachian Trail brought Blackpoll Warbler, American Redstart and Worm-eating Warbler.
My plan was to stop at Elk Wallow and count up my tally of bears over a breakfast burrito, but Elk Wallow came and went with no sightings yet (and the breakfast burrito did nothing to enhance my bear-spotting capabilities). 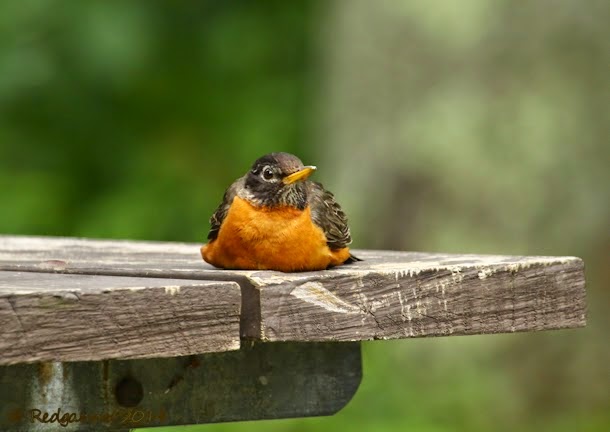 I stopped in at the next picnic spot (Pinnacles) and took a walk down the trail for a short way and found myself in a bird storm. This was a feeding party that had picked up a full head of steam and was ploughing through the forest. Downy Woodpecker, Hairy Woodpecker, Red-bellied Nuthatch, White-bellied Nuthatch and Black-and-white Warbler made up the bark pickers, while American Redstart, Red-eyed Vireo and Carolina Chickadee flicked about in the leaves. 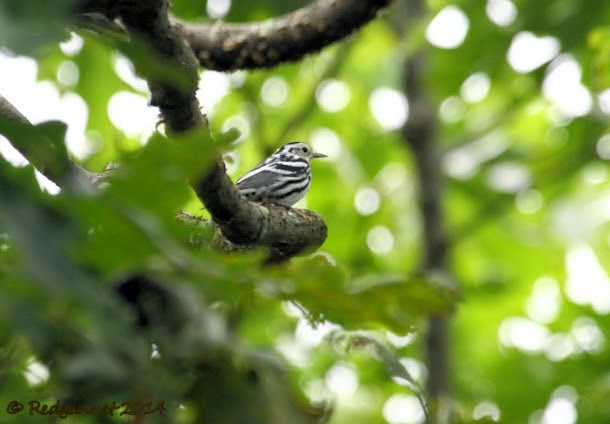 Blue-headed Vireo kept low in the undergrowth with Northern Cardinal while Scarlet Tanager and Tufted Titmouse held the high points. All the time, American Robin and Grey Catbird kept  a-squeaking and a-mewing. It was hard to keep up.
At last, as I approached Skyland, I found my first bear. Even for one who was beginning to wonder if he would find a bear today, it was an unsatisfactory sighting. A small cub looking frightened had been separated from its mother and dashed anxiously through the roadside bushes and disappeared. I am sure his mother must have been close by and that they were reunited shortly afterwards, but it was not the wild experience that I had hoped for. 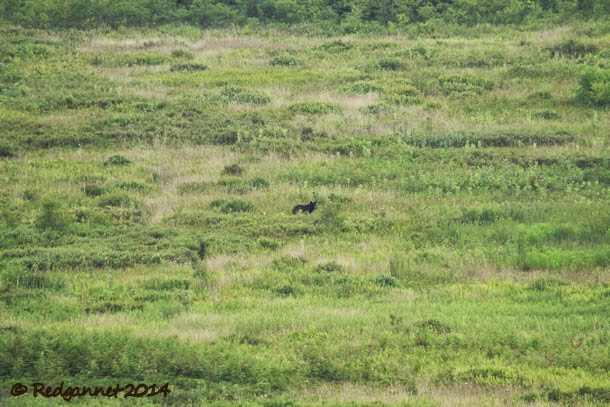 The bear in Big Meadow was far more interesting. It was a long way off across a very large meadow, but as a result, it was completely unconcerned and fed happily, head down. A family was walking in the meadow and didn’t appear to have seen the bear. Watching from a distance of over quarter of a mile, I was able to see the bear’s reaction as the family came closer. It was aware of their approach and looked up occasionally, but seemed unmoved until they came within about 70-80m. At this point the bear began to move away from them, continuing to feed as it went, but looking up more regularly to check that its flight distance was being maintained. The family took a left turn and moved away from the bear which settled down again to feeding in earnest. 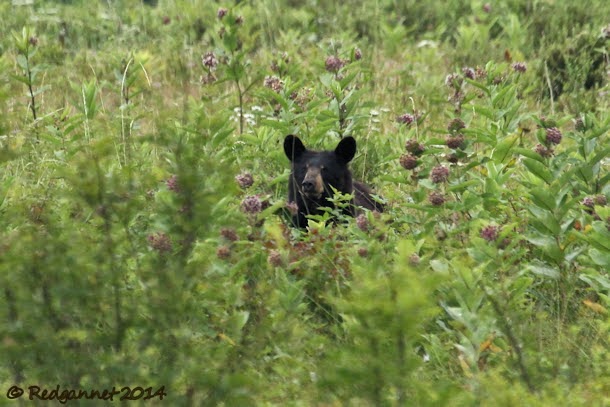 This experience allowed me to judge what the bear would tolerate and I walked out onto the meadow to get a bit closer. At about 100m or so, the bear looked up to check on my progress and I decided that I was close enough to allow him to continue feeding without disturbing him. It was now well into the afternoon and I decided to start for home. I had about 60 miles to cover along Skyline Drive to get back to the gate and I wanted to do it while there was still some light in the sky.
The verges that run along the roadsides were all filled with an array of wild flowers and these attracted the butterflies. I couldn’t resist a few moments spent on my backside watching them. 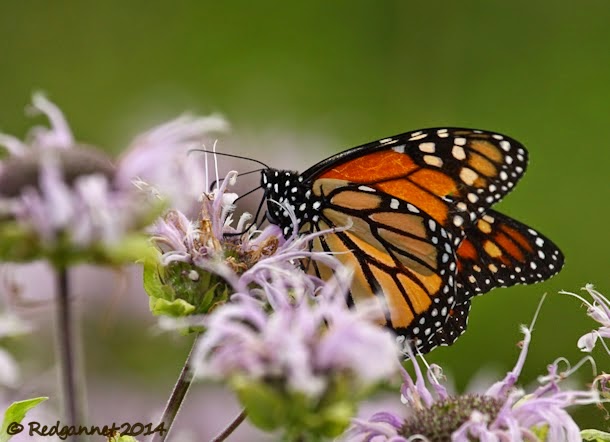 A third and then a fourth bear were seen on the way out, but I had changed my exposure settings for the bright, well-lit butterflies and forgot to change them for dark bears in the shade.
An exciting moment came as the sun dropped below the ridge and a large owl flew across the road in the half light. I pulled up and checked the roadside trees, but the owl saw me first and flew again. I saw just enough of it to say that it was a Barred Owl. 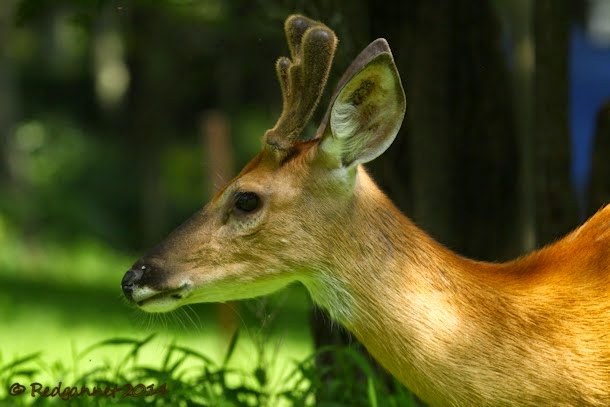 Shenandoah NP is a little over an hour from Washington DC. It can be accessed at the north end through Front Royal on Route 66.
There are plenty of picnic sites, rest rooms and lay-bys. There are a few stops with food available at various points along the 105 mile Skyline Drive that passes through the park.
Park regulations require that you pull completely off the road if stopped. Maps, details of facilities and charges can be found at the National Parks Service website for Shenandoah.
If the weather has been bad, the park authorities may close the road. Check the website above before you travel.
The road is open as a public route so you may pass at any time provided that the gates are open. A $15 fee applies and is valid for 7 days.

Please also bring plenty of insect repellent if you visit during the summer months.

For a previous post from Shenandoah NP, see the link below;
http://redgannet.blogspot.co.uk/2011/07/shenandoah-national-park-virginia-iad.html

Visit the dedicated USA and Canadapage for more posts.