I reached the University of Ghana’s Botanical Garden in Accra after taking more than an hour to travel about 8 miles. There are better ways to do it, so check the logistics section at the bottom of the post.
It was quickly obvious that this was not the manicured version of botanical garden that I had pictured in my head. A row of Royal Palms may once have graced a grand walkway, but it was now overgrown and under-maintained. The road leading from the gate was rutted and a narrow strip of grass had been roughly mown to either side. The slightly unkempt look of the area encouraged me to think that it would be more productive for birds.
The loud throaty call of the Red-eyed Doves could be heard over the softer chuckling of Laughing Doves and a Rose-ringed Parakeet screeched over as we (I was joined by my taxi driver, Samuel) entered. 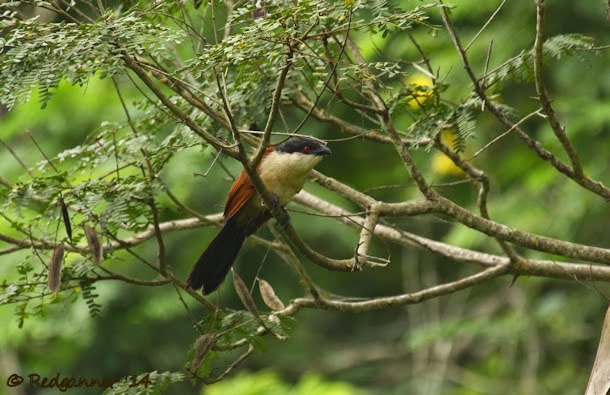 A Senegal Coucal rose from the grass and watched from a tree as we tried to track down a coarse, three-syllabled chirp which proved to be from a Yellow-billed Shrike. 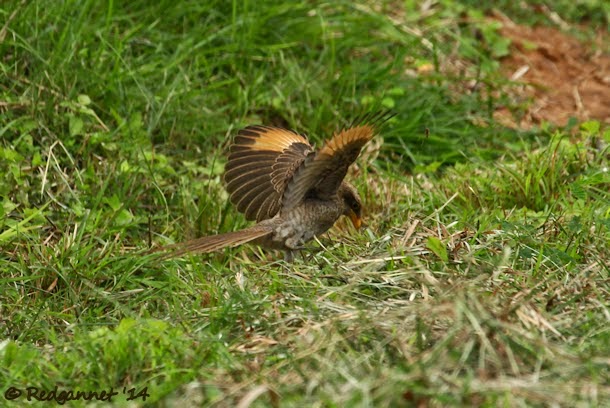 There are no signs in the gardens and I was not sure where we had started from, so we just felt our way round. Google Earth shows a roundabout in the middle of the gardens, but it was not as obvious in real life. The Royal Palms walk is to the right (east) and now we headed west. We chose the right fork when we encountered a junction. A hot spot stopped us for a short while with Green-headed Sunbird, Double-toothed Barbet and Black-billed Wood-Dove coming in quick succession and a greenbul sp escaped identification. 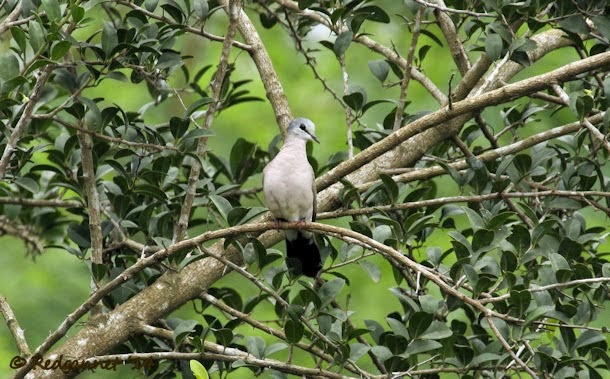 Does anyone else see Audrey Hepburn?

After a short while we came upon a fence which enclosed a number of water reservoirs. They had the look of sewage settling tanks, but there was none of the other accoutrements or sensory offences associated with water treatment. We followed the fence around until we found an open gate. Samuel seemed fairly sure that we were allowed in, so we took a look. 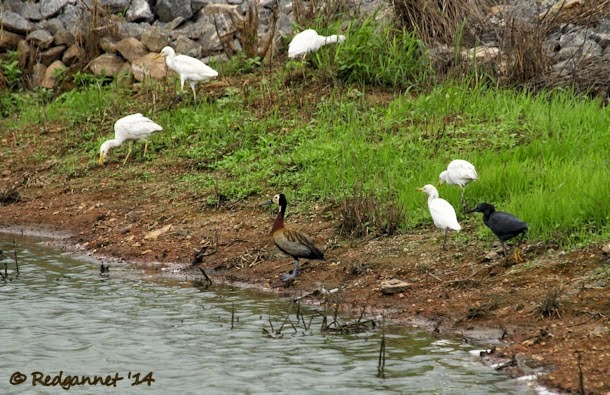 Common Sandpipers and Wood Sandpipers roosted on piers that jutted out into the largest reservoirs on the second tier. A view from above at Google Earth ref; 5 39 46.85N 0 11 35.29W shows 12 reservoirs with the third one down on the left (west) having a slightly lower level. This held true today and provided the most productive spot of the day. 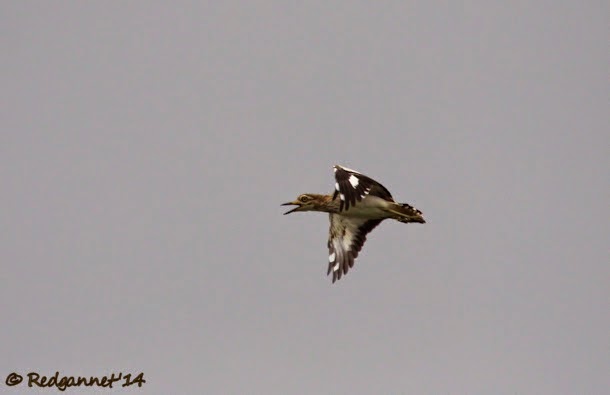 Spur-winged Plovers and Senegal Thick-knees roosted on the paths but unfortunately they flushed before we saw them. At the edges were White-faced Whistling-Duck, Cattle Egret and a Black Heron.  A Little Grebe was caring for its brood of three chicks on the middle pond. 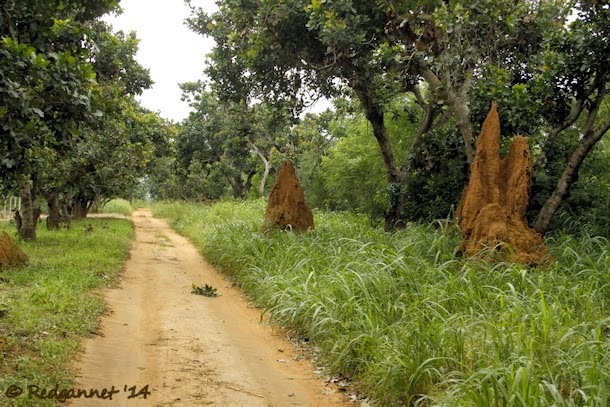 We returned via the experimental fields where the botany department of the university tests new strains of corn, and turned left along an avenue of what I took to be mango trees, but Samuel did not recognise the fruit. We returned to the roundabout and took the north exit which led us to a small pond that I had seen on Google Earth at ref; 5 39 56.84N 0 11 16.68W and had hoped to make the main focus of my walk. 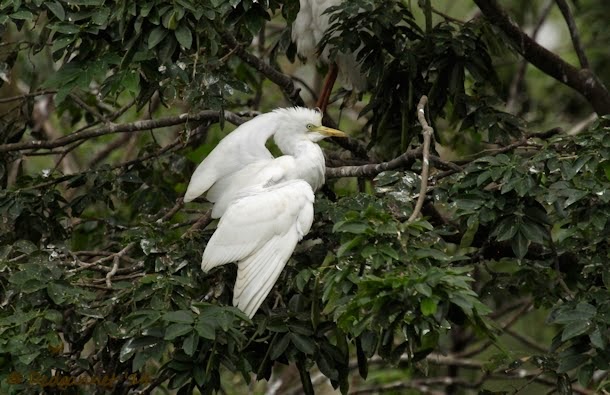 There was a small Cattle Egret colony with young birds still not keen to fly. Reed Cormorant were seen fishing and a Malachite Kingfisher waited patiently on the far bank. This small section of picnic area and lake are separate from the gardens and are subject to a GC 5 fee. On my next visit, I will start from here as access may be had at any time and it is easily accessible for the taxi. I started the day with no currency and the exchange desk didn’t open until 10.00am. So I had to visit a nearby hotel whose forex clerk was an earlier riser. Mind you, this was a Saturday morning. My first choice of entrance to the University grounds was blocked by a closed road and the second was manned by a guard who sent us back to the first. Eventually we entered via Freetown Ave. and stopped at the security post opposite the stadium. Here we sought permission to visit the gardens and it was readily given, but Samuel, my taxi driver, was not allowed to stop inside the university. I had booked him to wait for 2 hours, but he was not allowed to wait for me. We compromised and parked his taxi at the security point and took a security vehicle to the gate of the gardens. The security guard expected a small donation for this service, but he did come and pick us up again afterwards.

To avoid this rigmarole next time, it is possible (and my guess is that it would be much easier) to enter the gardens through the private entrance on Haatso Atomic Road, 1km west from the junction with Legon East Rd. This entrance opens onto the pond and picnic area and there are no barriers to the rest of the gardens. At some point someone will ask for 5 Cedis per person which equals about £1 at the time of writing. 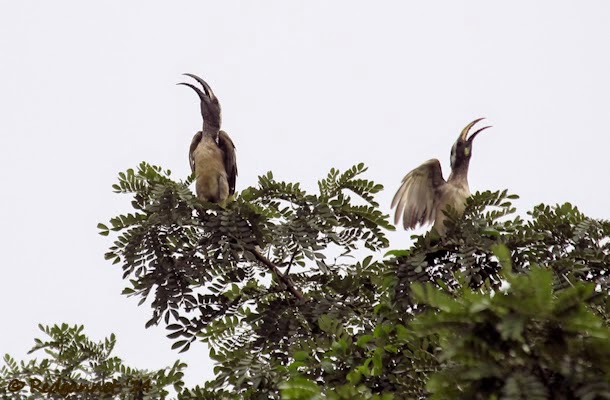 Samuel is a taxi driver hailed from the street. We negotiated a price of 80 Cedis to get to the gardens and for him to wait for 2 hours. He was very helpful in talking with the guards and organising a lift from the security driver. He gave me a number to contact him if I wanted to visit the gardens again and I am sure he wouldn’t mind me passing it on;   +233 (0) 244 175232

Malaria exists throughout Ghana and you are advised to take precautions. Parmaceutical precautions are not 100% effective, so the best advice is to avoid getting bitten. Use Deet and cover up.

Visit the dedicated Africa Page for more posts from Accra, including; The canopy walkway at Kakum National Park and Winneba Plains.