I have been handicapped in the 10,000 Birds year list. For a bird to qualify on the list, it must be seen from a site that I have not visited before, or for at least 5 years. The idea being that I was becoming set in my ways and needed a push to explore beyond my comfort zone. When the handicap was introduced, it wasn’t made clear whether I could count birds from a new site if I went back for a second look. I was revisiting Pulau Ubin after a trip in March and so as to stay within the spirit of the thing, turned left instead of right and explored the north end of the island this time.

Crikey it was hot and sticky – even for Singapore! The cool relief as the bumboat cut across the channel from Changi Pier only made the stifling heat worse when we pulled onto the island.There are few facilities on Pulau (Singaporean word for island) Ubin (Singaporean word for ubin) and those that do exist are mostly to be found in the small village where the bumboat pulls up to the jetty (at Google Earth ref; 1 24 6.03N 103 58 13.32E). Bicycles can be hired and there are a couple of restaurants and tea houses. Beyond here, facilities are sparse. 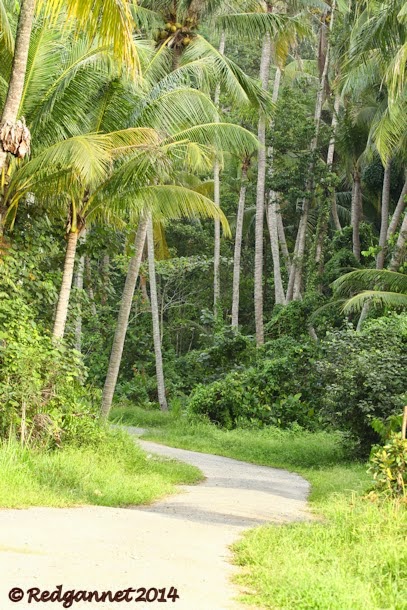 First things first, I turned right for a moment to check the picturesque ponds beyond the village, hoping for a Watercock or an exciting rail or two. No such luck, but the hornbills were making an awful racket and a White-breasted Waterhen scurried back into the lotus pond as I approached. A Zebra Dove and a Nutmeg Mannikin were new birds for the year, but will not count as I was covering old ground until I passed back through the village. Blue-throated Bee-eater also misses the cut.
Four White-bellied Sea-Eagles and two Brahminy Kites soared above me and a Grey Heron flopped slowly over. 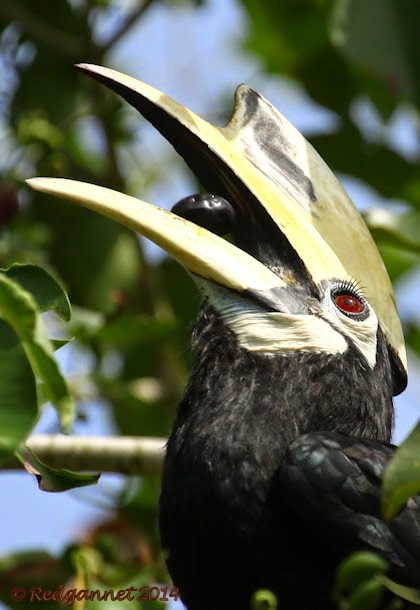 Back at the village, I headed out to break new ground to the north, but was quickly stopped by a flock of Oriental Pied Hornbills. They were feeding from a stand of fruiting trees and were just above eye-level. Eventually they moved to my side of the grove and gave me some superb views as they gobbled down the fruits. As I waited for them to come to me, a Lesser Coucal dropped into some damp vegetation nearby and an Oriental Magpie Robin serenaded me from the fence of the quarry. 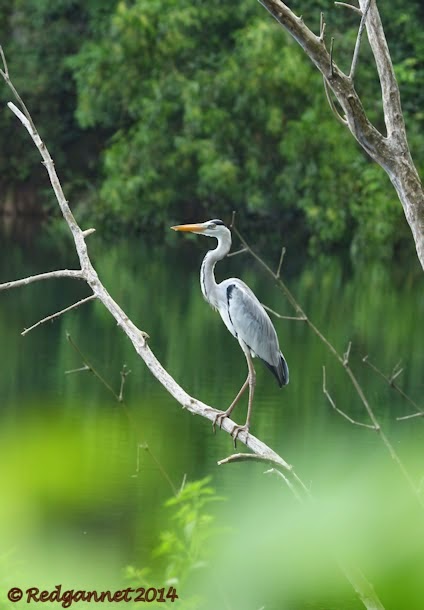 The quarry is flooded now and provides a roost for lots of Grey Herons. A quick count reached 70 birds on the first pass. Pacific Swallows rested briefly and a White-throated Kingfisher dropped down to gather up an unsuspecting dragonfly. 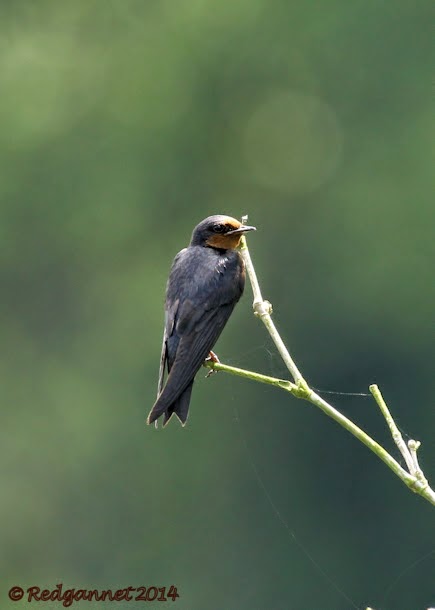 There were a few cyclists on the island today, but they were very polite, passing behind me if I was in the middle of the road, or stopping short if they wanted to ask what I was looking at. They all carried durian fruits which they picked up as they went along. Always looking for new experiences, I found a fallen fruit and broke it open to try it. The smell is said to be awful, but I found it merely sickly sweet. It is supposed to be luscious and delicious, but mine was dry and tasteless. I am not convinced that I was eating the right thing! Note to self; don’t eat strange things that you find lying on the ground and can’t accurately identify. 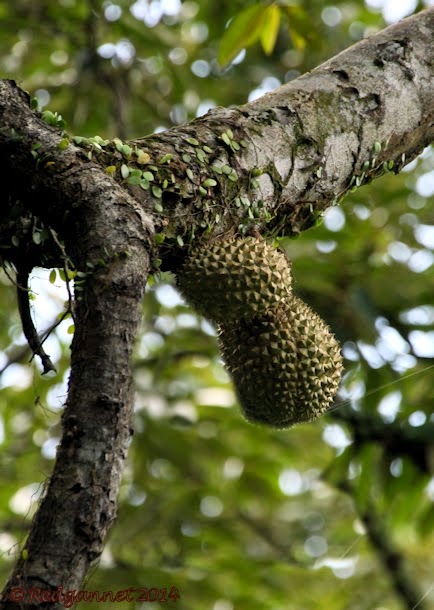 I had passed into some forest now and found a few Pink-necked Green Pigeons, Olive-winged Bulbuls and Dark-necked Tailorbirds along the road. But these were birds that I had already seen this year and were not furthering my cause. Beyond the forest section was a creek flooding into the mangroves. Ashy Tailorbird was seen here and at last, a score for the year list in the shape of a Pied Fantail. 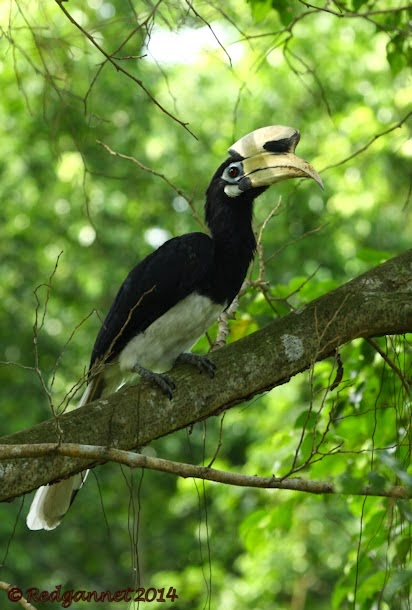 The return journey brought Common Iora, White-rumped Shama, Yellow-bellied Prinia and Eastern Crimson Sunbird. The hornbills were still feeding and drawing a crowd of cyclists who stopped to see.
This time a Plain-throated Sunbird sat up for me as I waited for a Hornbill to pose. 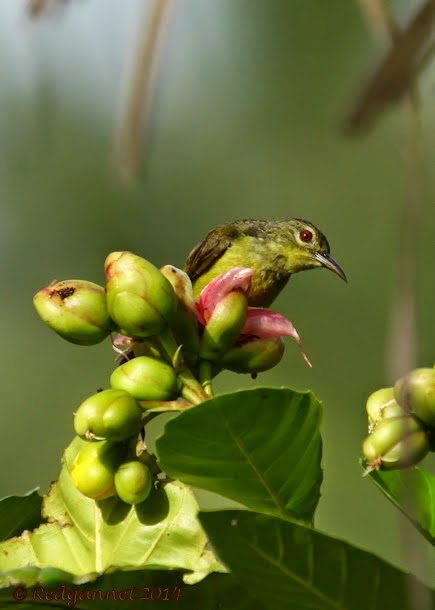 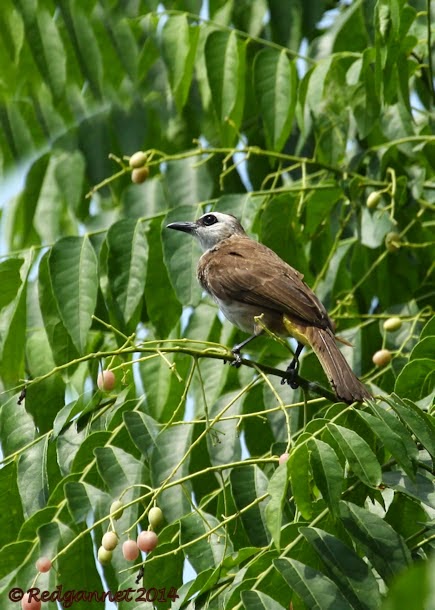 Bumboats leave from Changi Pier (Google Earth ref; 1 23 27.37N 103 59 15.32E) on the mainland, starting at 05.30 if the demand is there. They do not have a scheduled service, but run when a full load of 12 punters are ready to go. This is obviously more frequent and likely to start earlier at weekend, but on a Friday morning at 07.00, I waited for 20 minutes to make up a 12. The crossing takes 10 minutes and costs S$2.50. The return boat operates on the same basis. If you are impatient to be going, or fear that you may get stuck on the island, a boat can easily be chartered by paying 12 times the fare, ie S$30 (@£1 = S$2.1) or by paying the balance for any empty seats.
To reach Changi Pier take the MRT to Paser Ris at the end of the Green, East West line and take a taxi the rest of the way. It cost S$10 this morning and took 5 minutes. A taxi all the way from the city would be substantially more.

Visit the dedicated Asia page for more posts from Singapore, including; Central Catchment Area and Paser Ris.
Birding, Birdwatching in Singapore.
Posted by Redgannet at 16:57