I was caught on the back foot today when we rolled up outside an unfamiliar hotel on the edge of a freeway in Houston. First things first, I had to find my bearings and then decide where I could reach on a bike when the temperature was pushing 95F. I had hoped to visit Edith L. Moore Nature Sanctuary, but my new starting point added 15kms to the round trip, so I saved myself ‘til the morning when the temperature would hopefully be more tolerable for a cyclist.
I arrived at 07.15, shortly after the timed gate self-opened. There is a feeder area around the log cabin and Blue Jays filled the top slot, bullying Northern Cardinals, House Finches and Red-bellied Woodpeckers from the hanging containers. The path leads to a small pond that serves as a dipping experience for children later in the day. A small Broad-banded Water Snake crossed the pool faster than I could unship my camera. The humidity would have spoiled the shot anyway, it was horrible today and my glasses continually fogged up if I stood still for too long. 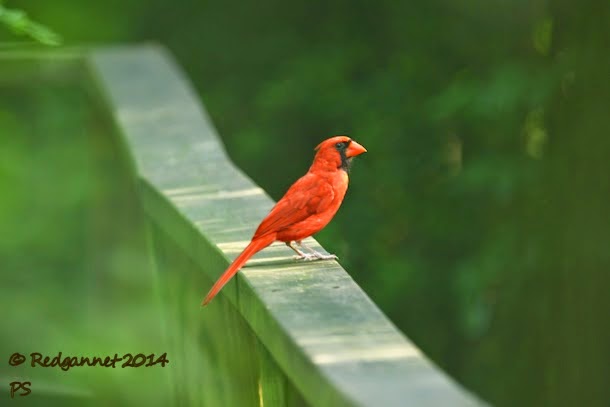 A bridge crosses a tributary of Buffalo Bayou and gives access to the east side of the reserve.
Northern Cardinals, Carolina Wrens and Blue Jays provided most of the bird song today. Carolina Chickadees gave their quick “Chicka – dee,dee,dee,dee,dee,dee,dee” and a coarse-sounding “Kreeeep” made me look up to see a Great Crested Flycatcher. 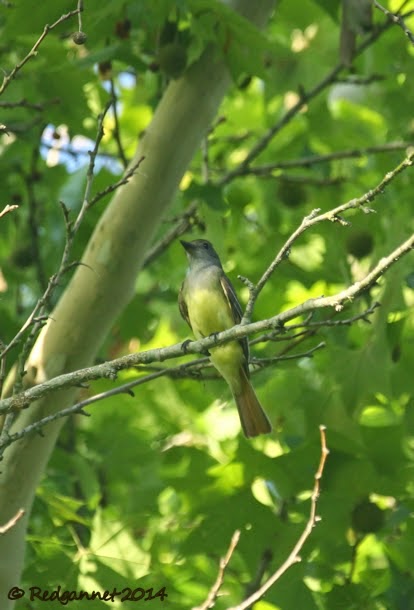 The sanctuary is a mixed woodland, predominantly Loblolly Pine, but there are plenty of leafy oaks. A Great Horned Owl flushed from an oak beside the path ahead of me and I was able to follow it by listening for the frantic mobbing of the American Robins and Blue Jays. 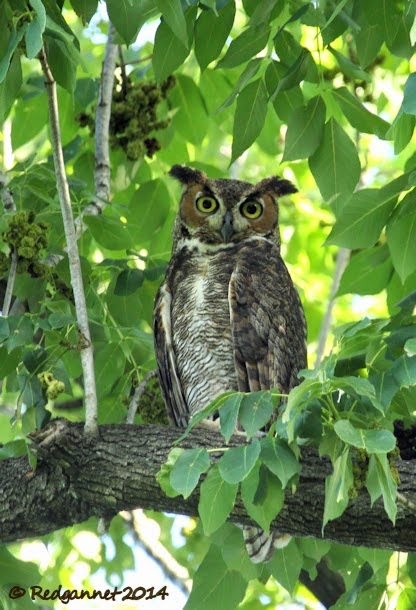 It had landed in full view in one of the oaks and its eyes were wide open. Whilst this makes for a good picture, I have come to realise that this is an indication of an owl under stress, so I took the picture and moved on. I found the owl again (I assume it was the same one) a little later and the Blue Jays were still mobbing it. Despite being harassed by the birds, it saved most of its attention for me. I was 40 meters away and it was 10 meters up, so it obviously didn’t like people.
The protected area is only 17.5 acres, so it didn’t take too long to complete the paths and return to the log cabin which was now playing host to a couple of groups of school children. Dipping nets and plastic dishes had been positioned near to the small pond and I took a quick look before the classes arrived and disturbed the water. I was pleased to find another small snake and a few moments later, a third. The light was too poor to get a decent shot even though the snake (number 2) moved quite slowly and despite high ISO and wide aperture settings. Terry Hershey Hike and Bike Trail is very close by and I took a few moments to see if I could find a Mississippi Kite. They can be seen hunting over the meadows here for dragonflies that chase above Buffalo Bayou. Instead I found a bird that I am more accustomed to finding on the other side of the Atlantic. Cattle Egrets were stalking the rough grass along the trail. 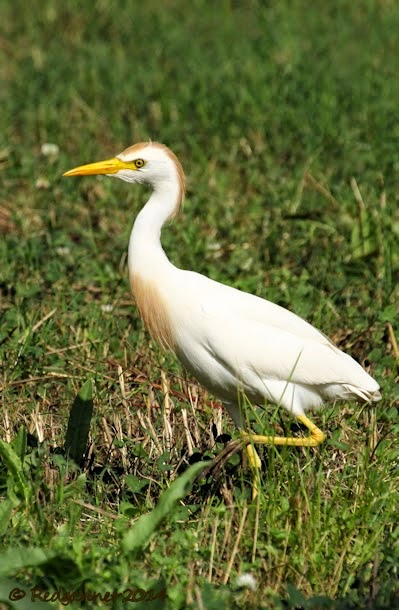 Edith L. Moore Nature Sanctuary is open from 07.00 until 17.00 with electronically timed gates. There is no charge for entry and it houses the Houston Audobon Headquarters. The property and the log cabin were left to the society by Edith to protect it from development.
The ride along Memorial Drive was very pleasant, passing some high end real-estate on an easily navigable route. It took 45 minutes to ride the 14kms on a flat road with light traffic and plenty of overtaking space for passing vehicles. Stay on Memorial, head west and cross Sam Houston Tollway (Texas Beltway 8). Take the first left, Wilchester Blvd, after crossing the freeway and the sanctuary is signposted. It can be seen at Google Earth ref; 29 46 17.22N 95 34 14.28W.
Memorial Drive is unusual in that it does not describe a straight line, but meanders through the leafy suburbs. Bus 70 ($1.25 per ride, It runs twice an hour during morning and afternoon peak,but only once an hour through the late morning and early afternoon) plies the route and will accept a bike on the front rack. Leave the bus at Gessner, 3kms before the sanctuary.

Visit the dedicated USA and Canada page for more posts from Houston.
Birding, Birdwatching, Houston, Texas.
Posted by Redgannet at 23:17