It is hard to know which moment to pick as the highlight of this post. It could have been the long-awaited Great Grebe or the surprise Plumbeous rail. After looking at Red-fronted Coots all morning, it came as a shock to find that they qualified for the red-pen too. The Guira Cuckoos performed as usual and at last I remembered how to work my camera. So it was a good day all round. 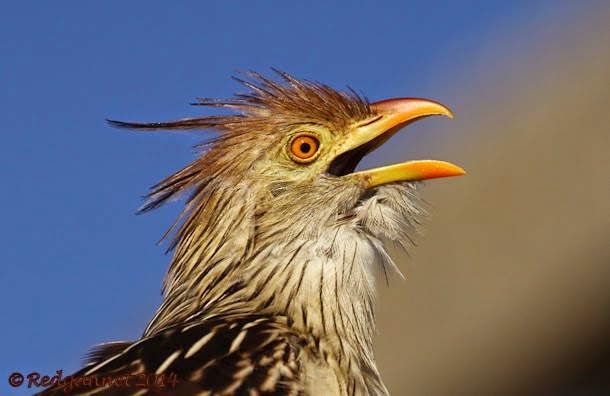 Compared with previous visits, the list was slightly low at 44, but I put much of that down to birds migrating north, though in truth I have no clue about the migratory habits of the Argentinian avifauna. The list made it past the 40 mark by virtue of the waterfowl that had come to enjoy the flooded Lago de Los Copios along the inland promenade. 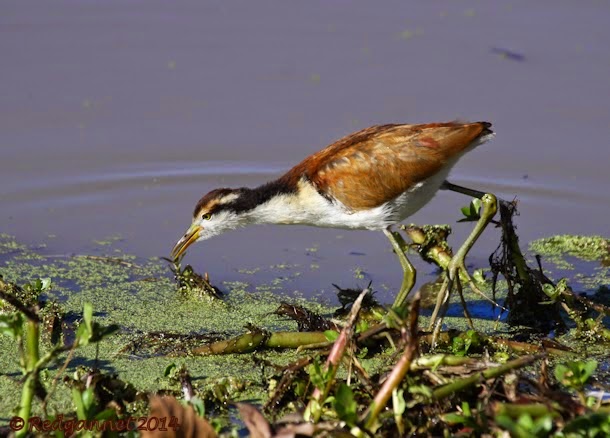 I was only able to cover a limited area of the reserve today as I had come straight from the flight and therefore had a late start. I checked the promenade and the southern trail.
I started by moving north to south along the promenade which was already quite busy on a Sunday morning. Personal security was at the front of my mind for much of the day and I tried to be as discrete as possible with my camera, but this area comes under the watchful eye of the Navy and they have a reputation for dealing firmly with miscreants. So the crime rate here is lower than in other parts of the city, but nevertheless, it doesn’t do to flaunt these things. 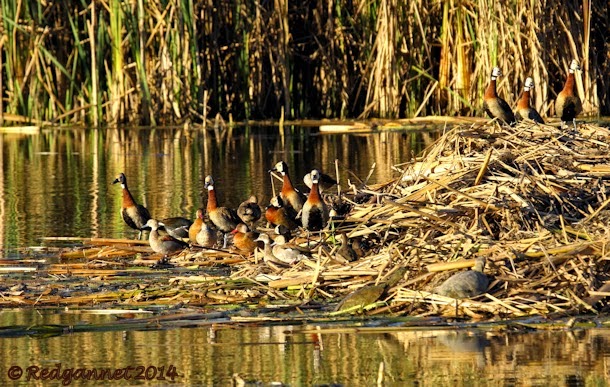 I waited until I could access the lower walkway that drops to level with the water along the southern third of the promenade (It is usually gated, but the catches are in poor condition and an inquisitive tug will usually result in the gates swinging invitingly open). Work has been going on here to drag much of the weed from the water. Small roosting islands have been built from heaps of the weeds and White-faced Whistling Ducks were using them to roost. A closer look revealed Brazilian Teal, Ringed Teal and a single Rosy-billed Pochard. Despite the Ringed Teal being written in red, I am quite familiar with them as they feature in a local wildfowl collection. The Rosy-billed Pochard was the first one that I had seen since finding them here as a life bird over 18 years ago. 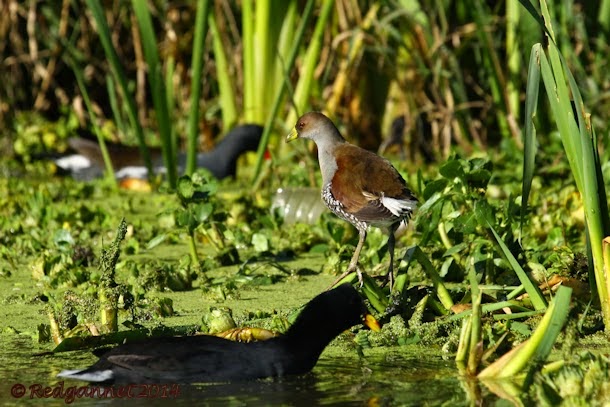 The edges of the reeds and the open water were frequented by gallinules and coots. Common Gallinules greatly outnumbered the Spot-flanked Gallinules, but it was the latter that I lavished attention on. Red-fronted Coots were easy to see and I didn’t realise that I was trying to look past this life bird to find the other coot species that are common here. 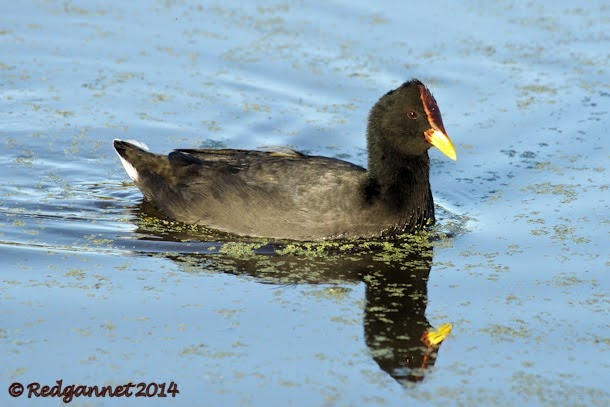 As I was trying to make a Red-gartered Coot into a White-winged Coot, a movement in the reeds caught my attention and a rail darted across an open spot. Red and sky-blue patches at the base of the bill were easily visible which gave me the ID for a Plumbeous Rail.
Two Coscoroba Swans roosted at the edge of the reeds and Silver Teal fed, shoveler-like from the surface of the water. Red-gartered preferred the southern end of the open water. 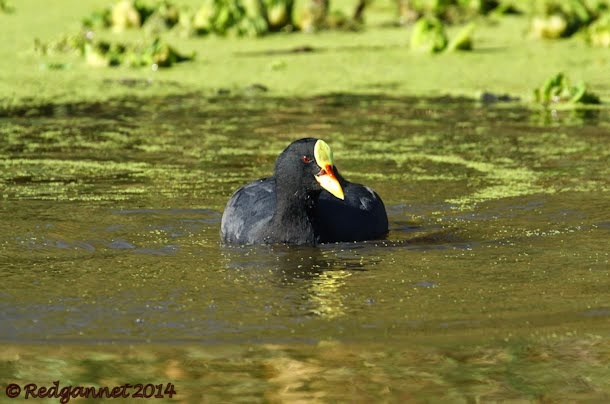 The Laguna de Los Copios is not always wet and has had almost no water at all during my last couple of visits, so the waterfowl are not a permanent fixture here, but a real pleasure when they are on site.
The southern entrance to the Costanera Sur Ecological Reserve is at the end of the promenade at Google Earth ref; 34 36 59.64S 58 21 23.23W I wanted to walk the southern loop, but the reserve was very busy and the bird numbers were low. 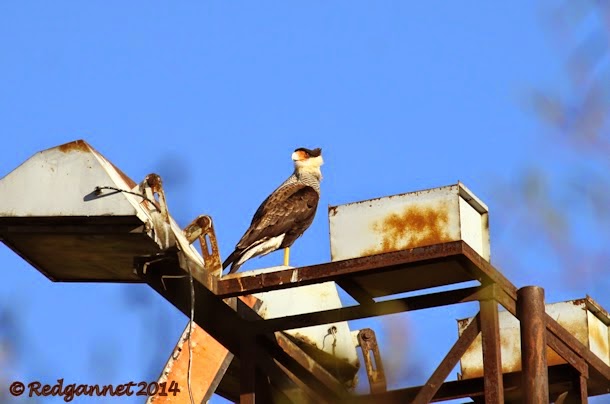 A steady stream of people was heading towards the picnic area that looks out over the coast (Google Earth ref; 34 36 23.12S 58 20 47.08W). It seems that watching the sunset from the beach is a popular attraction for the local Buenos (although of course the sun sets inland, not over the water). A Southern Caracara took refuge at the top of a tall metal structure. This structure has proved productive in the past with American Kestrel and Chimango Caracara.
I pulled off to the right halfway along the path towards the picnic area and looped round the southern section of the reserve. Even so the paths were still very busy and did not give up much bird life, though a Small-billed Elaenia popped up for a moment in response to a “pish” and a Hooded Siskin ventured out onto a thin branch during a lull in the traffic. 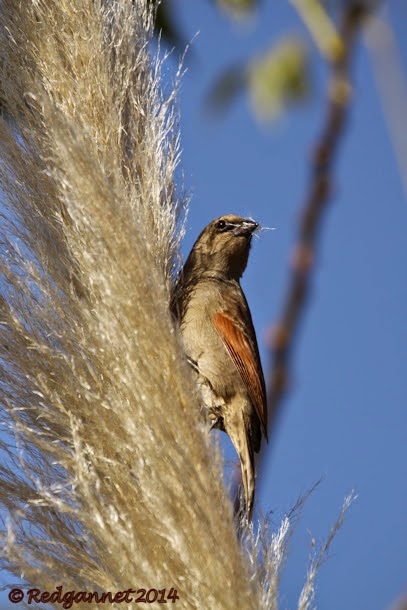 A small flock of Bay-winged Cowbirds fed from the characteristic plumes of Pampas Grass that can be seen around the reserve. Picazuro Pigeons were very common and many were seen flying over as they began looking for roosts in the early evening. This one was found at the picnic site and looked as if it had come to take in the party atmosphere. 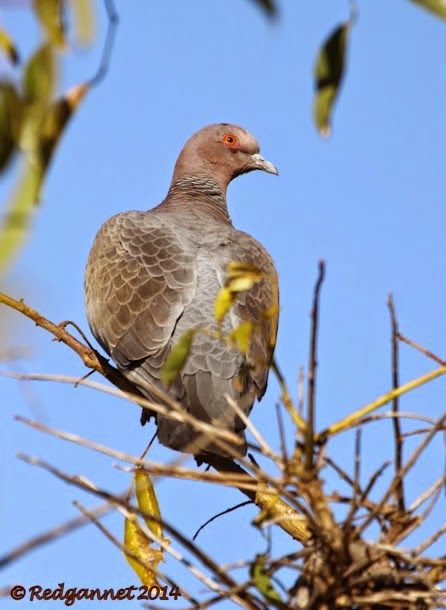 I was about to take a quick snap of the crowds on the shore when I noticed a movement on the water beyond. I replaced the Canon with the Bushnell’s and was delighted to see a Great Grebe, just off the rubble beach. 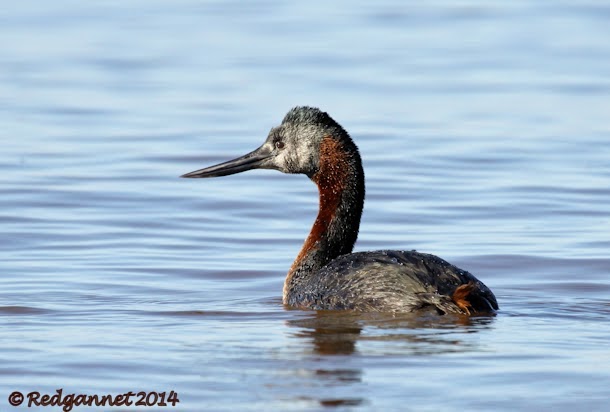 This was a bird that I have hoped to see on each of my visits here, but up until now had been unlucky. It is not a rare or difficult bird, but it was at the northern extent of its range and I was at the southern limit of mine, so this is the only place that our paths are ever likely to cross.
The grebe was fishing close in to the shore and allowed me to sit on a chunk of rock on the water’s edge as it went about its business. 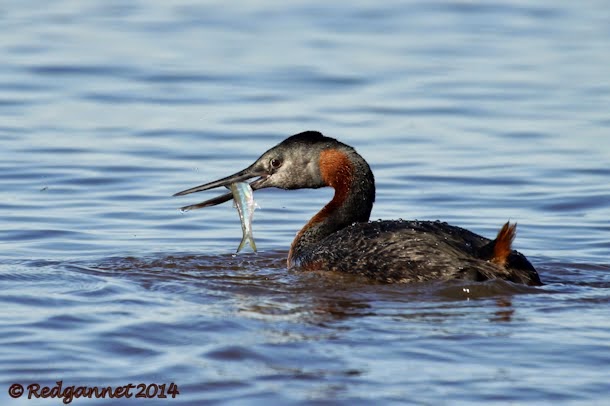 I returned to the south entrance and found the promenade packed with people. They had come to shop at small stalls laid out on the pavement and to eat and drink at the small parrillon cafes. It would have been virtually impossible to bird along the promenade in these conditions, so bear this in mind if you are here on a weekend. The morning and early afternoon had been quiet enough, but the evening was extremely busy. 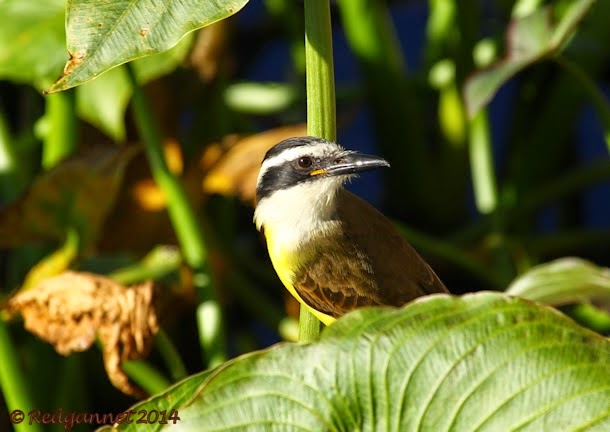 A quick visit on the morning of our return flight added a few birds to the list and brought another lifer in the form of a Long-winged Harrier. The light is against you early in the morning as you walk along the promenade and even at daybreak there were joggers and a few left-over revellers from last night. A Harris’s Hawk flew across the low weeds at the northern end, betraying the presence of a few ducks, including a couple of Yellow-billed Teal.
I reached the southern gate just after 08.00 and it was punctually open. A Rufescent Tiger-heron stood in the deep shadow and a Chequered Woodpecker obligingly made itself obvious in a dead tree. The north gate was open on this occasion (Tuesday morning at 10.00), but I cannot vouch for its opening times.

Costanera Sur Ecological Reserve consists of a large area of reclaimed land on the shore of the Rio Plata/ South Atlantic Ocean, close to the docks area of Buenos Aires. The reclaimed area has annexed the once magnificent promenade from the big water of the coast. The promenade, though still magnificent in its faded glory now looks out onto reedbeds and freshwater wetland (Lagos de Los Coipos). There is open water at the southern end depending on the recent rains and the vigilance of the park workers who were raking out a lot of weed this weekend. 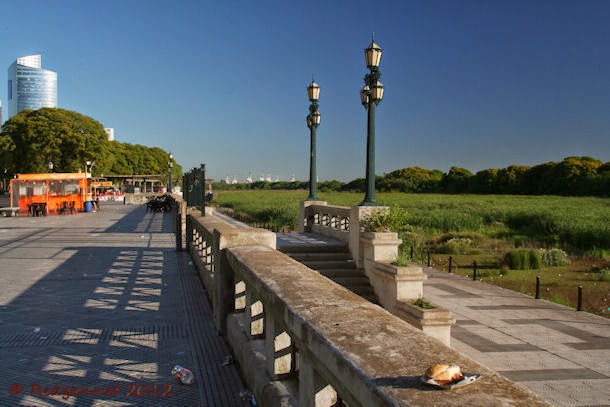 It is a popular spot for joggers and cheap cafes cater to the less energetic. This area becomes extremely busy on weekend evenings. It is accessible at all times with a low wall separating the 2km public walkway from the Lagos de Los Coipos. 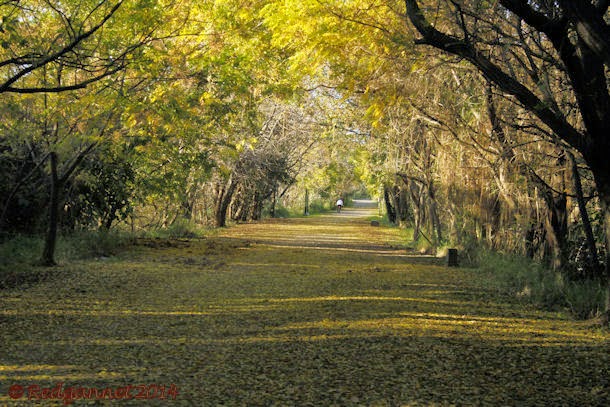 The main body of the reserve is the reclaimed area. A good path runs all the way round the inside of the reserve with a couple of short cuts through the centre. A complete circle is about 8kms. Two large lakes have pretty much been clogged with reeds and in my four visits have never had any visible open water, just a wide expanse of reeds. Most of the interest comes along the paths which are lined with woodland, scrub and pampas. 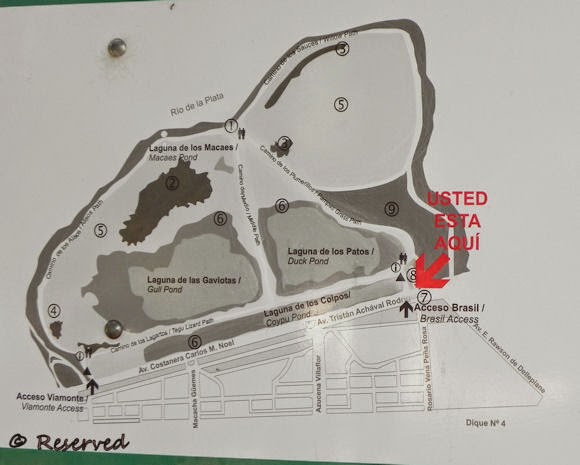 The reserve has a gate at the southern end of the promenade (Google Earth ref; 34 36 58.45S 58 21 18.90W. It opens at 08.00 and closes at dusk. A gate at the north end of the promenade is not as reliable. I believe that it is only open at weekends. If you are on foot, it is easy to skip the fence here if necessary.
The reserve is also popular with joggers and walkers who will often greet you amicably as they pass.

Visit the dedicated Central and South AmericanPage for more posts from Buenos Aires, including Ribera Norte and Parque Tresde Febrero.