It was difficult and frustrating in the forest today. Large parts of it were very quiet and when birds tried to give themselves away by singing, I was unable to find them. They did not respond well to pishing and stayed deep in the shadows, or high in the trees.
I had come to the Pedra Grande section of Parque Estudial Cantareira. I had arrived early and had to kill half an hour before the gates were opened and visitors were allowed into the forest at 08.00.
A few non-forest birds kick-started my list; Blue-and-white Swallow, Great Kiskadee, Rufous-collared Sparrow and Swallow-tailed Hummingbird were all seen as I waited. 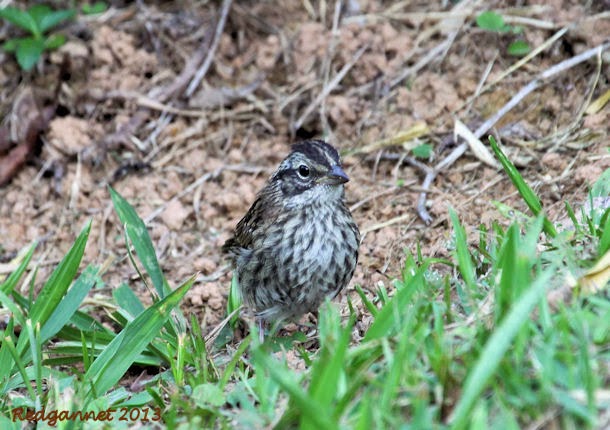 There is a 9.5km route that takes in the two main attractions of this section of the park, with most of the walk being on tarred road. The road climbed from the entrance and a side trail cut into the trees after a short while. The Bugio Trail runs for 350m, re-emerging further along the road. “Chaks”, “Chiks”, “Chips”, “Chits” and “Quits” greeted me as I walked along through the gloom. The trail was very dark and the birds of a small party were difficult to pin down. Eventually, a Red-crowned Ant-tanager showed well enough to be identified and a Scaled Woodcreeper called to give itself away. A Black-capped Foliage-gleaner flashed its head pattern to aid identification and bring the first of today’s three red-letter birds. 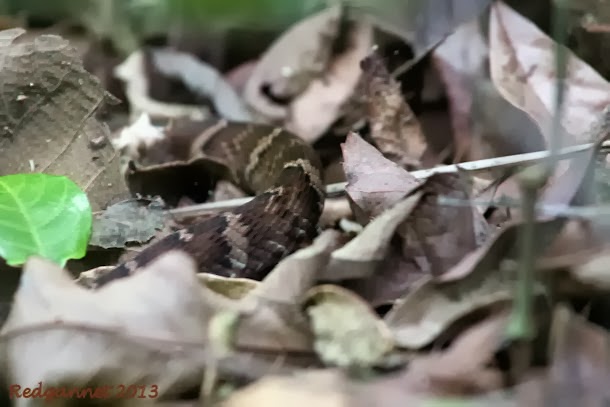 A movement at the edge of the path caught my eye as a small snake (I think it may have been a small Jararaca, but I am open to opinion) moved off the path. It had tried to hide amongst the leaf litter, but I was just able to make out a section of its back. I wanted to take a picture so that I could identify the snake later and spent a long time trying to locate its head. It was so dark under the trees that I couldn’t find anything more than the short section of body, but I could have kicked myself when I took a closer look at the photograph later on. There was the head with the snake looking straight at me! The ISO had to be pumped up to 3200 and the aperture was as wide as it would go to get as much light as possible. Even so, the exposure was still 1/15th. Hand-held at 400mm – excuses, excuses, but I have been cross about it ever since. 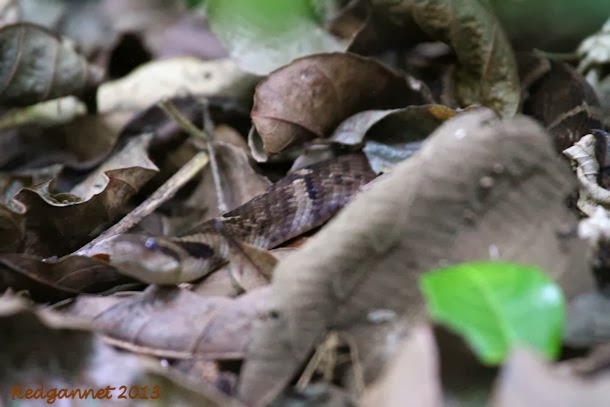 The trail rejoins the road at the turn off for the park administration buildings which is off-limits to the public. I continued up the hill and recognised an insistent call from the canopy and eventually tracked down a Red-eyed Vireo. The road reaches a turn off to the left after approx 2kms. This is one end of Caminho de Pedra Grande, the circular road that passes the eponymous big rock that affords an extensive view of Sao Paulo, 10kms to the south. Do people really come from the city to visit the forest and look back at the city?

(My recollection of the road layout in the park differs from that of Google Earth. I am convinced that the circular road runs around the rock, while Google Earth has the viewpoint to the south of the road)

Working from memory, the second turn off is the easiest, quickest and recommended by the park as the best route to approach the rock. Despite the park’s advice, it is also the easiest way back out, which leaves the lower three-quarters of the road less travelled. This makes it no less frustrating as the birds were still difficult to find and those that could be seen were still maddeningly difficult to identify in the dark, at distance, or silhouetted in the canopy. A few that could be identified were the Eared Pygmy-Tyrant and the stunning Brassy-breasted Tanager. 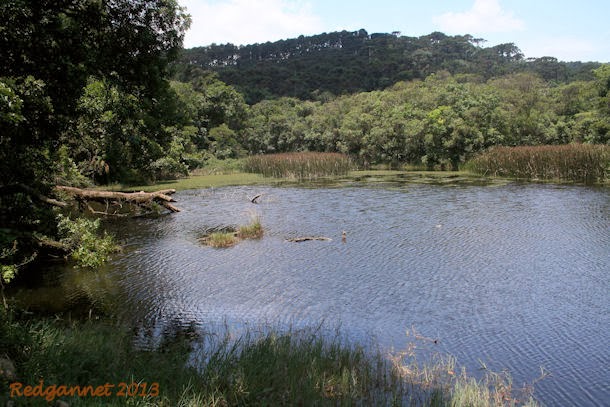 The second attraction of this section is the Lago dos Carpes, a delightful lake along the unmade road at the bottom of a steep slope.

(Again, my recollection of the road system differs from Google Earth. The main road from the gate has two turn offs to the left which form the top and bottom end of the side road leading round the big rock. The main road continues past the second turn off, but from here on, it is unpaved. A junction splits the road and the left fork leads down a steep incline to the lake)

A pair of Least Grebe was maintaining a nest on the lake and a pair of Euler’s Flycatchers was tending a nest in the cavity of a bamboo stem. A caterpillar was brought in and a foecal sac removed as I watched. 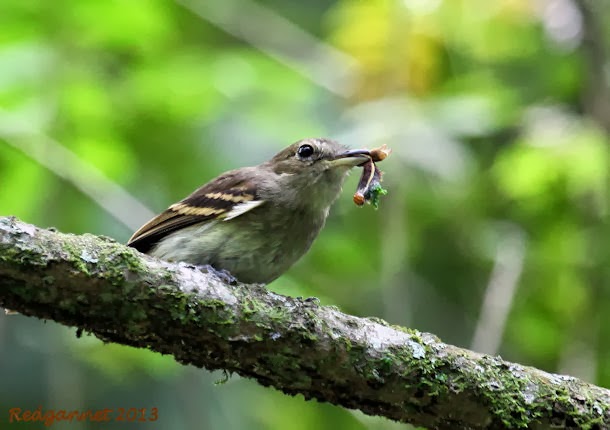 The walk back up the hill was not quite as bad as I had feared, but the downhill walk back to the gate was rather jarring on my poor weak knees. A small group of Brown Howler Monkeys broke up the descent and a tanager had me somewhat perplexed. My best guess would be an Opal-rumped Tanager, after a half-decent look, but none of the photos showed any of the field markings. I can’t find anything else that it could be. 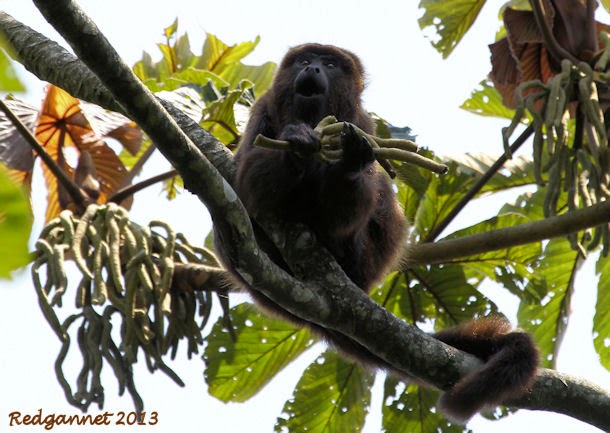 Only around half of the birds on the list below could be thought of as forest birds, but quite a few were missed. The Red-throated Fruit Crow was heard all day as it moaned from the tree tops and many small silhouettes and fleeting shadows were left unidentified. Even some of those that made the list bore little resemblance to their illustrations in the field guide. A Brassy-breasted Tanager for example, looks good on a printed page, but took my breath away when I saw it in the sunlight. The Opal-rumped Tanager is still under consideration. It was not a perfect view, none of the pictures came out and it was beyond its accepted range. A question from eBird should be expected if I decide to submit it. 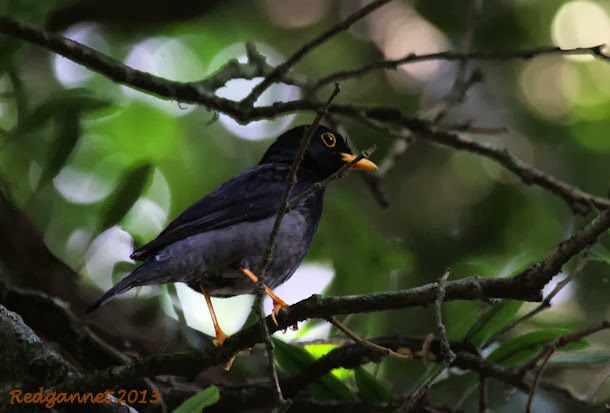 It covers nearly 8,000 hectares of the south facing slopes and is part of the larger 64,000 hectare preserve of Serra da Cantareira

Cantareira Nucleo Pedra Grande can be found in the hills to the north of Sao Paulo. Actually it is a mountain by virtue of reacing 1010m at the big stone. It covers nearly 8,000 hectares of the south facing slopes and is part of the larger 64,000 hectare preserve of Serra da Cantareira.
Public visitors are usually only allowed entry from 08.00 until 17.00 at weekends and private vehicles are not allowed. The entry fee of 9 Reas is paid at the gate.
To walk to Lago das Carpas and complete the return by way of Pedra Grande on the mostly paved road is a distance of 9.5kms.
It may be possible to gain special entry to the park outside of the normal public hours with a park employee/guide. Previously I have been able to visit the park at 06.00 on a weekday, but my guide on this occasion has moved on to a different section. He has sent me a link to his friend and colleague who may be able guide you at a time more conducive to birding.
Contact Daniel at;
danielsilvaindio@gmail.com
Mobile phone; 011985962043
Take the Metro to Tucuruvi. Take a taxi from here and show the following address to the driver to make sure that you are going to the right place;
Rua do Horto, 1799 – Tremembe – Parque Estudial da Cantareira – Nucleo Perda Grande. 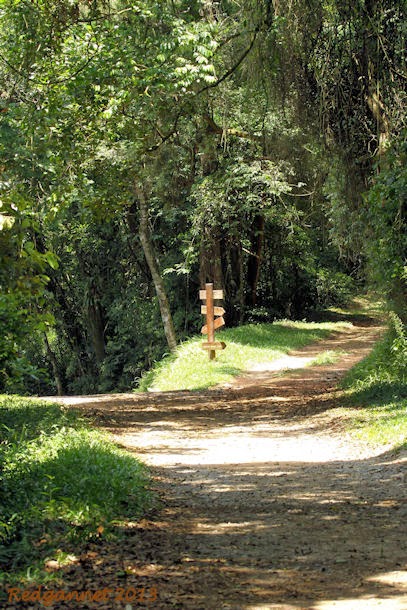 On return, it may not be possible to find a cab, so make your way back down the hill to the small open area in front of Alberto Lofgren Park. Here you will find a stop for bus number 2470 which returns to its terminal at Metro Station - Jardim Sao Paulo for 3 Reas.

A previous post from Cantareira can be seen at the following links;
http://redgannet.blogspot.co.uk/2011/10/cantareira-sate-park-nucleo-pedra.html 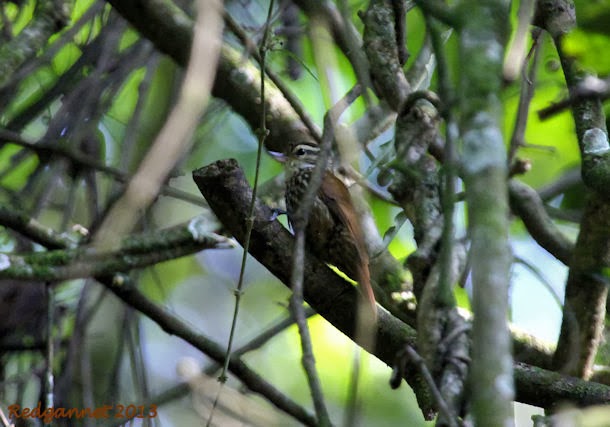