Atlanta’s morning dawned dark and late. It is 10 degrees further west than New York and thus the sun takes an extra 40 minutes to reach there. By seven o’clock it was possible to see that this would be a dull, overcast day with leaden, threatening clouds. Piedmont Park is at the east end of 14th St in Atlanta and I wish now that I had taken a few scenic shots to illustrate this post as the birds as uncooperative as the light.

A Cooper’s Hawk greeted me from an obelisk near the park gate at Google Earth ref; 33°47'11.22"N 84°22'40.95"W and a Northern Flicker drummed noisily on an aluminium balustrade on the Swimming Pool Building. 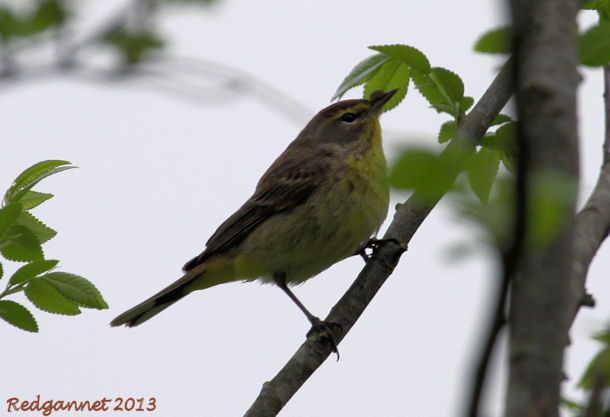 Close to the bridge were some trees harbouring a few warblers. This was what I was hoping that the morning would bring. Mostly they were Yellow-rumped Warblers, but there were also a few Palm Warblers and a single Blackpoll Warbler.
A bridge crosses the lake and a few more migrants were found in the park beyond. A Great Crested Flycatcher, some Grey Catbirds and a couple of Brown Thrashers were seen towards the top end of the lake. 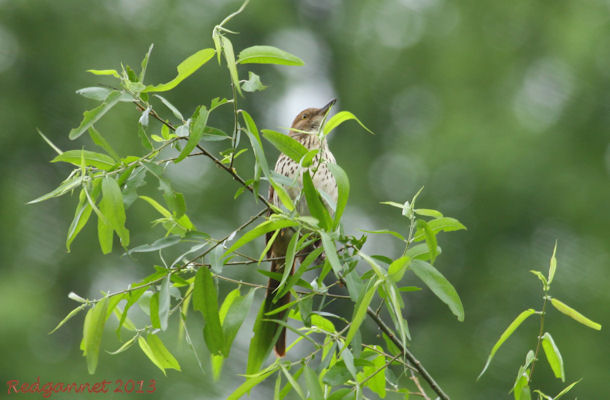 I was exploring Piedmont Park for the first time and was wandering aimlessly about. By chance, I came across Six Spring Wetland Area which boasts a short boardwalk raised above a stream and an area of weeds. A couple of Northern Waterthrushes were seen here as well as a selection of sparrows and an Indigo Bunting.
The path passes beneath a stone bridge and continues alongside the stream. A Ruby-throated Hummingbird was feeding from the flowers in a blossoming tree beside the path and a few Northern Rough-winged Swallows chased insects on the wing.
The park is sited beside the Atlanta Botanical Gardens which has a canopy walkway. I am sure that this would have been a great place to be during migration, but the gardens open late on a Sunday and I had another site that I wanted to explore.
The list below only shows 31 birds, but a total of 60+ was submitted to eBird for the same site on the same morning which indicates that there was much there that I missed.
Birds seen; 31
Canada Goose 20, Mallard 5, Cooper’s Hawk 1, Mourning Dove 5, Chimney Swift 8, Ruby-throated Hummingbird 1, Northern Flicker 3, Great Crested Flycatcher 1, Blue Jay 2, Northern Rough-winged Swallow 4, Carolina Chickadee 2, Carolina Wren 1, American Robin 45, Grey Catbird 6, Northern Mockingbird 3, Brown Thrasher 4, European Starling 25, Cedar Waxwing 40, Northern Waterthrush 2, Blackpoll Warbler 1, Palm Warbler 8, Yellow-rumped Warbler 15, Eastern Towhee 2, Song Sparrow 3, Swamp Sparrow 6, Northern Cardinal 12, Indigo Bunting 1, Red-winged Blackbird 6, Common Grackle 15, House Finch 3, House Sparrow 3.

Visit the dedicated USA and Canada Page for more posts from Atlanta
Posted by Redgannet at 21:12