I had set out to follow Mike’s intrepid example and eventually found myself at Panti Bird Sanctuary. The Bunker Trail runs from the main road into the forest towards the mountain. I had made life difficult for myself by trying to make the visit using public transport on Easter Sunday and found that 10 hours of travelling brought 3 hours of birding. 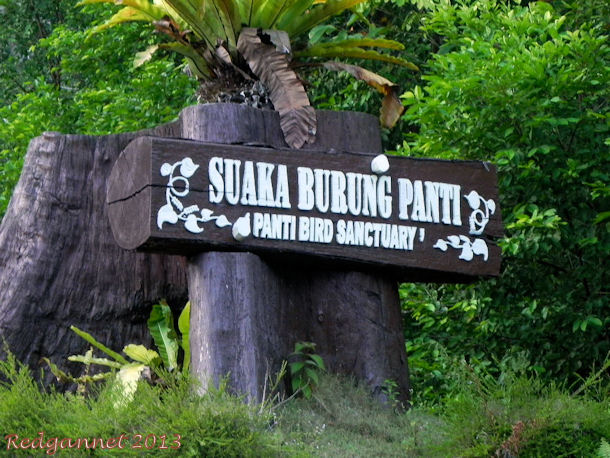 There are some details and logistics below about the journey, but let's forget that for the moment and concentrate on the forest. The Bunker Trail can be found about 20kms beyond Kota Tingii on the Mersing Road (Google Earth ref; 1°52'45.50"N 103°55'18.00"E). Paved for the first part, it quickly becomes a dirt road and leads southwest into thick forest. I stayed on the road, but there were a couple of dark trails leading into the forest. 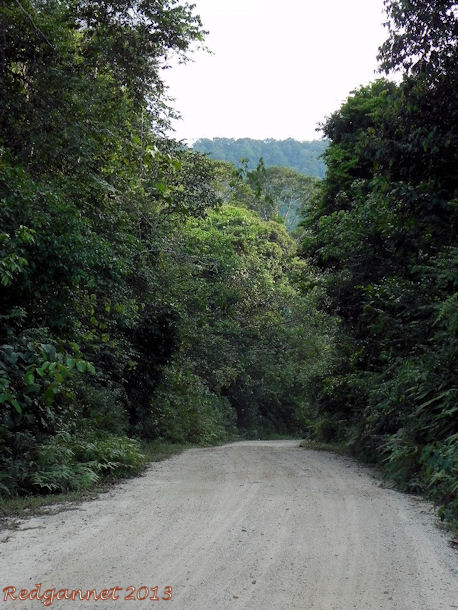 Thanks to a non-airconditioned taxi, my camera and binoculars had already acclimatised to the heat and humidity, so I was able to hit the ground running. As soon as I stepped from the taxi, I could hear the strident alarm of the Orange-bellied Flower-pecker. My usual thanks go to www.xeno-canto.org. 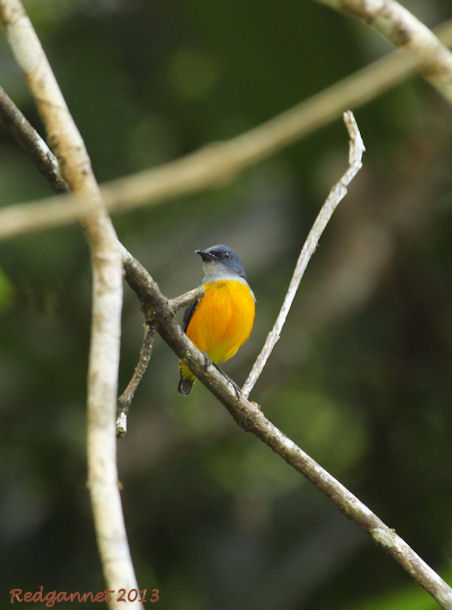 There was a small amount of traffic on the road in the late afternoon. Some trail bikers and families on scooters or in cars were making their way out of the forest. I was the only person on foot and heading into the forest. I had had plenty of time during the journey to do some homework and bulbul revision quickly paid off when a small flock of Cream-vented Bulbuls were seen. 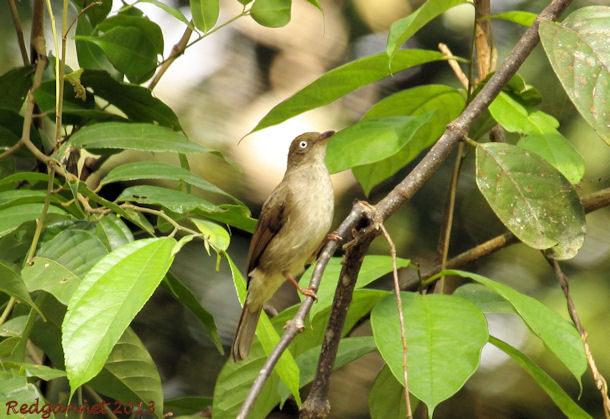 A loud call made me turn to see a large bird fly across the road. In the first moments of the brief sighting, its large size and pied plumage pushed me towards a hornbill, but it had the undulating flight and chisel bill of a woodpecker. It turned out to be a White-bellied Woodpecker. Moments later an Orange-backed Woodpecker crept around the trunk of a dead tree, never to be seen again. 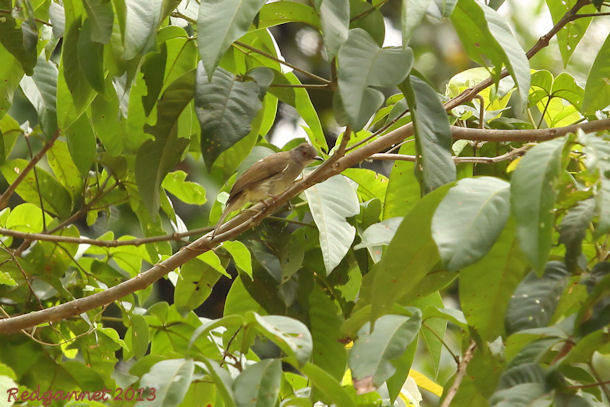 A small area on the right provided a bit of forest edge habitat for some Red-eyed Bulbuls, a Common Tailorbird and an Asian Brown Flycatcher. A short boardwalk here allowed me to walk out across a damp patch and get a close look at some dragonflies, but I preferred to press on rather than spend my precious time here.
As ever in the forest, sightings were brief and in poor light. I missed a few IDs and screwed up plenty of photos. A small party of birds including Chestnut-winged Babbler and Blue-winged Leafbird crossed the road ahead of me. I had packed the camera away as the light had faded so much, but the female leafbird sat well enough to entice me into another go. A very tall emergent tree was high enough to catch the last of the evening light. Scarlet Minivets and a Long-billed Spiderhunter in the canopy were the last birds that I was able to identify. A hornbill crossed the road on my return walk. Potentially it was a female Wrinkled Hornbill, but the sighting was just not good enough to be sure.
Getting back to Kota Tingii from the trail head proved to be quite tricky. It was already quite late in the evening when I stepped back onto the main road. I had hoped that I might be able to flag down a bus or taxi, but there was no sign of either and it became very dark before a private car eventually stopped to offer me a lift.


I had intended to stay the night in the small town and take in the Firefly spectacle on the river, but by the time we made it back to town, the boat had already left and I had missed my chance so I decided to press on back to Singapore. That was my big mistake as the queues for buses to cross the bridge looked like the lines at Disney World on a Holiday weekend.
This was Easter Sunday and many Singaporeans had crossed into Malaysia for the holiday and were returning for a normal working day on the Monday.
It was very difficult to know which line was queueing for which bus and a very helpful line supervisor pushed me into a line to avoid having to speak English to me. Left to my own devices, I might still be there.
At the Singapore entry post I was called aside again. The caption on the officers screen read "suspect to be detained". This was not as dramatic as it sounded, but it meant another delay as the senior officer completed the secondary interview.
By the time I had completed formalities the trains in Singapore had stopped running. It took me 6 hours to return from the forest to my hotel.
Under different circumstances, with a bit of practice and organisation, I reckon that the time could be whittled down to under 2 and a half hours each way.
Birds seen;

The site is in Malaysia, but can be reached from Singapore. A bridge crosses between Woodlands in Singapore to Johor Bahru (JB) in Malaysia. The respective border controls are found at each end of the bridge. You will need your passport.

The easiest way to cross the border is probably by private car.
Buses run from Queen Street Terminal in Singapore to Woodlands and on to Johor Bahru in Malaysia.
Buses also run from Woodlands MRT Station, and Kranji MRT Station
By bus or by taxi, you will leave your vehicle at Singapore border control to complete the required formalities. As a crew member, I did not have an entry stamp in my passport and was taken for an interview with a senior officer (a crew Gen Dec. would be useful here) which delayed me by about 30 minutes. I was worried that the bus would have to wait for me, but my worry turned to indignation when I found that the bus had crossed the bridge without me!


This is the usual procedure as buses are plentiful under normal circumstances and another one will come along shortly. The bus numbers are displayed and travellers queue in their respective lines. Buses are extremely cheap and it would not break the bank to pay another fare and jump on the first one that passes. Otherwise retain your ticket to continue across the bridge on your original bus number.
Taxis are turned back at the border and travellers continue across the bridge on a bus.


Malaysian Border procedures require travellers to step from the bus again and complete formalities for entry. This was much quicker and I was soon on a third bus on my way to the Larkin Bus Terminal in Johor Bahru. From here I caught bus number Maju 227 to Kota Tingii. I subsequently found that the bus route goes back past the border control post and I could have saved myself 30 or 40 minutes by catching it from there (City Square).
It takes an hour to get to Kota Tingii and then a taxi ride of a further 20kms takes you to the head of the Bunker Trail. Taxi drivers might be a bit reluctant to make the drive as they are unlikely to find a return fare. Set a price before stepping into a non-metered taxi. I don't recall the agreed fare, but it was very reasonable.


Getting back to Kota Tingii from the trail head proved to be quite tricky. It was already quite late in the evening when I stepped back onto the main road. I had hoped that I might be able to flag down a bus or taxi, but there was no sign of either and it became very dark before a private car eventually stopped to offer me a lift. It may be prudent to arrange a pick up or ask the taxi driver to wait. Arrange the waiting and return fee in advance.
To make an early morning visit to Panti it would probably be best to stay in Kota Tingii the night before.
Posted by Redgannet at 22:00