Muang Boran is an area of fishponds. It is close to the Ancient City which, just to cause confusion, is also called Muang Boran. In common with taxi drivers everywhere, mine obtusely misunderstood me and took me to the Ancient City. Twice. Even with a map he showed no local knowledge. My goal was just 1 mile from the taxi rank, but I had to direct him myself. If you go there, please ensure that you know how to get to the fish ponds from the motorcycle taxi rank. See the end of the post for directions. 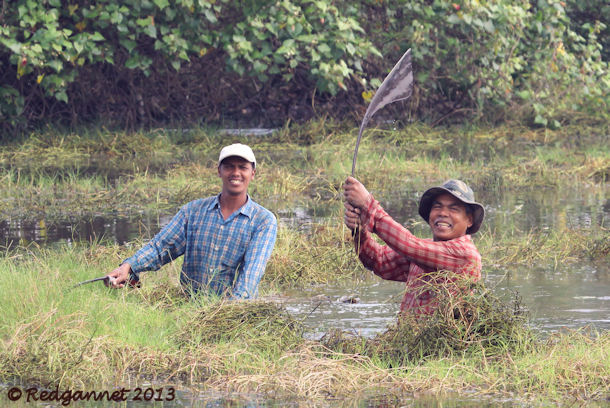 The first pond is directly ahead as you cross the little bridge once you arrive. It held plenty of birds this morning, but unfortunately looked directly into the sun as it rose above the chemical factories. Cotton Pygmy Geese cackled as they sought a safe distance from the bank. 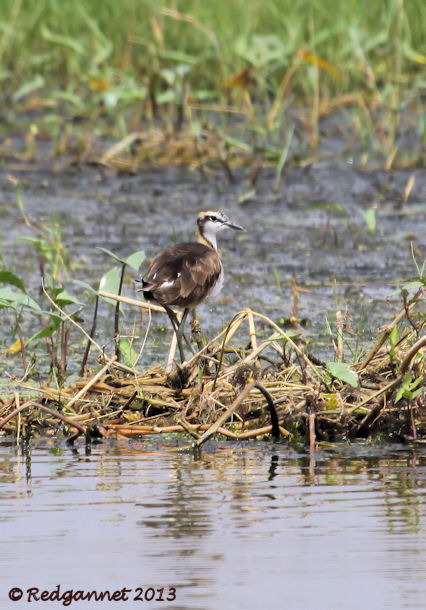 Pheasant-tailed Jacanas and Bronze Jacanas, ticked and grunted. Using the scope I found a Common Kingfisher, Little Egret, Indian Cormorants and various pond herons. The Ardeola species here are so similar that it is extremely difficult to tell them apart if they are not sporting their breeding colours. They are both very common at this time of year. 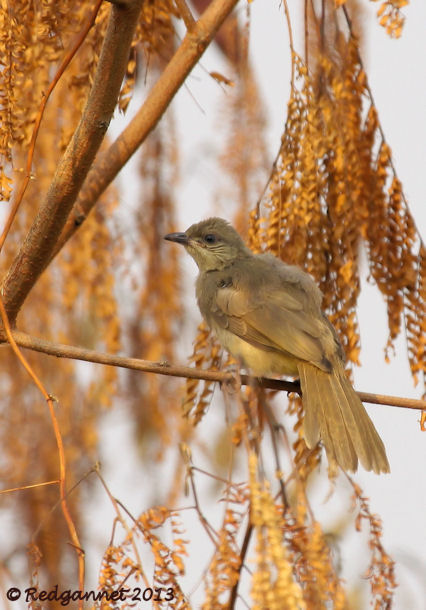 To my left were a ditch and a few scrubby trees. Streak-eared Bulbuls, Pied Fantails and a Brown Shrike were found here. One of my target birds for the day, a Striated Grassbird called from the top of some reeds. Close by was a female cuckoo that I took to be a Plaintive Cuckoo on account of a nearby male. 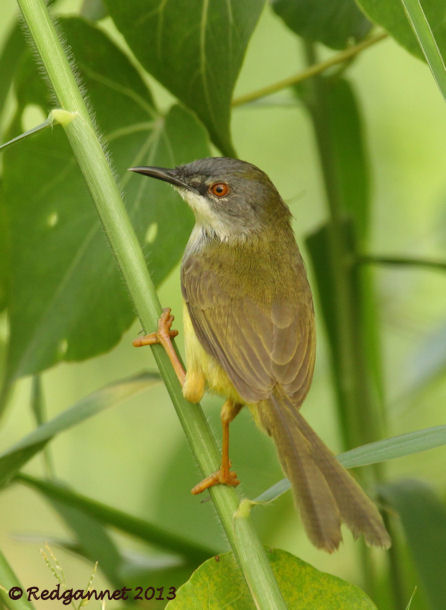 Yellow-bellied Prinia
Acrocephala warblers are said to be abundant here, but every time that I managed to get a decent focus on anything in the reeds, it turned out to be a Plain Prinia or a Zitting Cisticola. Only when searching the reedbeds for rails, crakes and bitterns did I eventually come across Black-browed Warblers, another target species for the day. White-browed Crakes were easy to find again. I was hoping for a Baillon’s Crake, but settled for a Ruddy-breasted Crake in its absence. 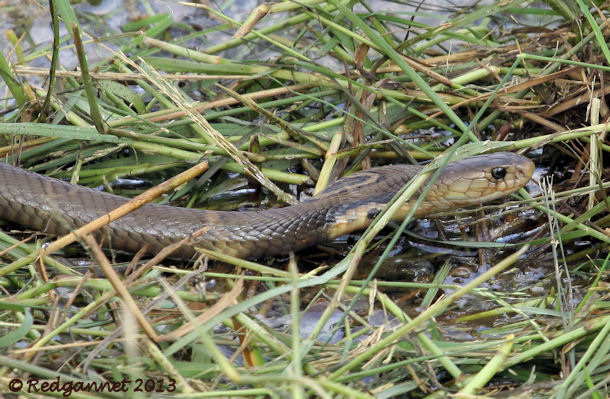 I misread my map and went slightly off my intended route. Retrospectively, I was pleased to be in the wrong place at the right time when a Monocled Cobra swam across an open ditch ahead of me. I had to move quickly to catch up with it. It may have been intending to cross the bund that I was walking along, but once it saw me, it disappeared into the grass to the side of the path. Actually, ‘path’ is a poor word to use to describe the overgrown raised barrier between two ponds. The wet grass was up to my knees with reeds and rank vegetation on either side. Now that I had seen a cobra, I felt the need to brush my tripod through the grass ahead of me as I walked heavily along. A second cobra made me jump as I came within two or three steps of it. It made a frantic dash towards a hole into which it disappeared like a piece of spaghetti being shlurped up. 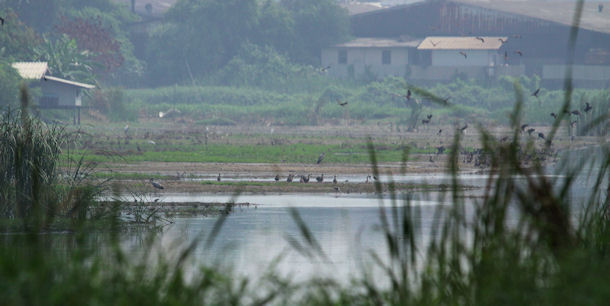 There had been plenty of birds to see up until now, but in ponds 8 and 9, the numbers increased dramatically. A big flock of Lesser Whistling Ducks took to the air from the roosting area at Pond 8. There were many other birds there including Asian Openbill Storks and Indian Cormorants. I should have taken more time to check it over, but the heat was starting to get to me and I preferred to move on. I was back on the main paths now and they are well cut and maintained.

From a shady spot beneath a small acacia tree, I watched large numbers of Cattle Egrets, Intermediate Egrets and Great Egrets instead. The heat was becoming intense now and I had not given myself adequate chance to acclimatise. My water had run out and I had to return to the little shop by the footbridge at the entrance. For the chance of a refrigerated drink I couldn’t object to taking a few pictures. 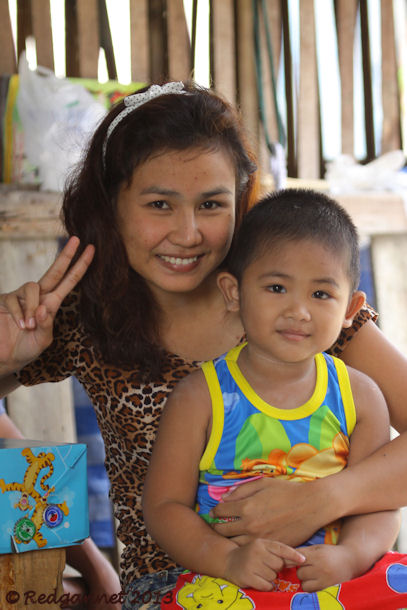 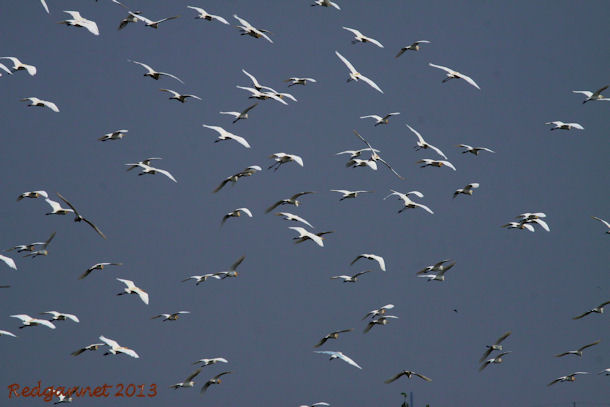 
Visit the dedicated Oriental page for more from Thailand, including; Lumphini Park and Pak Thale.

Use the train line to get as far south as possible. The last station headed towards the coast is called Bearing. From here, ask the taxi driver for Muang Boran (pronounced Boulan). Unless he is a keen birder himself, he will probably want to drop you at the Ancient City. A bridge crosses the river that runs alongside the road and can be seen at the Google Earth Coordinates;13°32'19.01"N 100°37'21.14"E. In fact, you need to go a further 500 meters beyond the bridge for the Ancient City. pull in just before the footbridge that crosses the dual carriageway. There is another bridge crossing the river to the left. You are very close now.
You can either continue with your taxi if you feel confident directing him, or change to a local motorcycle taxi here. Either way, you may end up having to give directions.
Cross the bridge and pass two apartment blocks on the left. Turn left after the second block. Follow the road around and you will come into a village. Take the first right and follow it around until you come to the village motorcycle taxi rank. Turn right here and the ponds are 100m ahead of you at Google Earth coordinates; 13°32'27.71"N 100°38'0.13"E. Check out Google Earth and bring a mental map with you.Nick Upton writes a great Site that has a map. You can find it at;
Posted by Redgannet at 23:16