The tide at Bang Poo (Bang Pu Mai) was predicted, by 2 different sources, to reach its height around 07.30 this morning. It was pretty high when I arrived and looked as if it was still flowing strongly. My plan had been to arrive around high tide, check out the heron and egret roosts, then take a moment at the hide overlooking the roosting ponds. Hopefully by this time the tide would be receding and I could repair to the sea path to watch the waders flying out to greet the mud. In case you feel slightly uncomfortable about this picture, it is a montage of the only bird that I managed to get in focus as it flew over.

Where I went wrong was not realising that a 3.9 meter tide would come up very high and would then need to drop substantially before any mud was revealed. Thus it was that I had to wait nearly four hours after the predicted high before any birds began to emerge from the mangroves and onto the mud. Even then, they were slow to feed. To get the most from this site, may I suggest that you refer to this link which gives a very good account of what to look for and what to expect. My account here is a simple snapshot of my visit and a bit of an update. 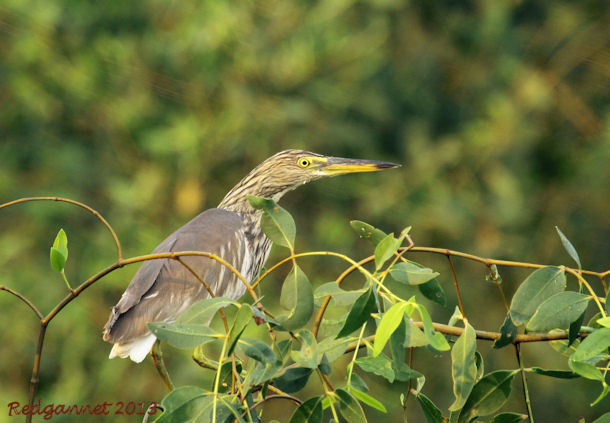 Pond-heron
I started at the heron and egret roost that can be found close to the main road at the entrance to the site. Pond herons were plentiful, but the two local species are almost indistinguishable. I did manage to winkle out a couple of Javan Pond-herons that had assumed their breeding plumage early. The spot marked on the map at the above link is not viewable, but Great Egrets, Little Egrets and a Black-crowned Night Heron could be seen at Google Earth ref; 13°31'15.27"N 100°39'9.50"E. 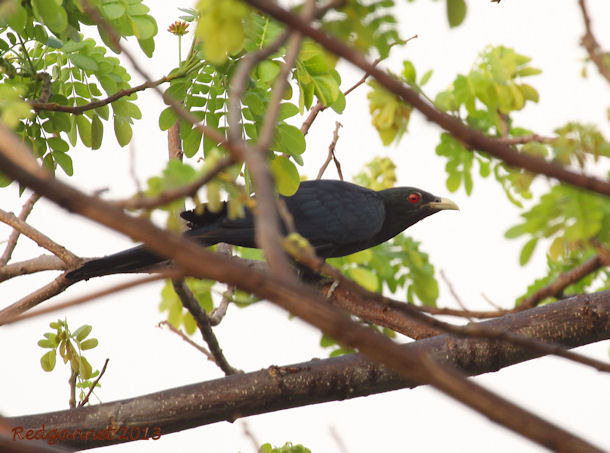 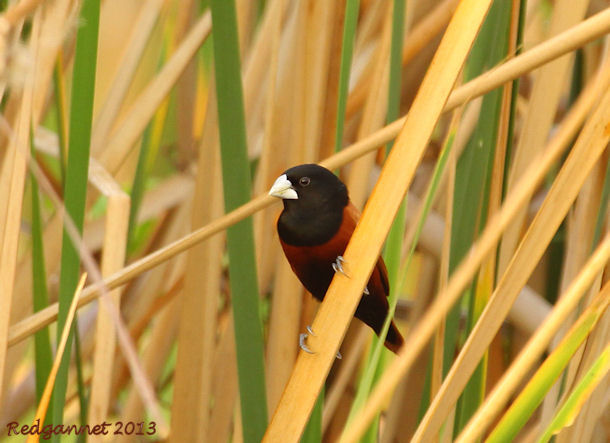 Back by the pier, the tide was seeping up onto the promenade and Dr Seuss Fish that seemed to dislike the water, found relief from the wet by crawling up onto rocks and floating debris. 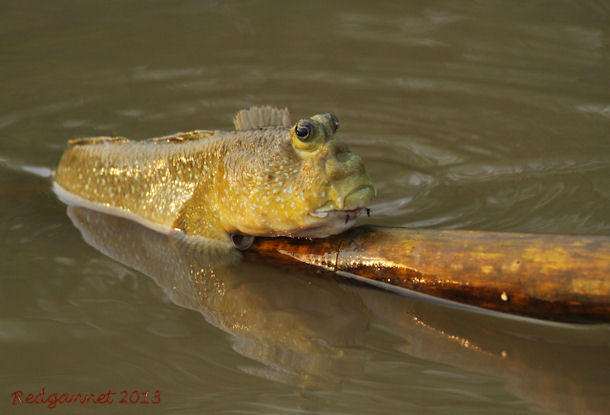 As you look at the pier, you will notice a pair of metal gates that lead from the Visitor Centre into the mangroves on the left. A path runs parallel to the shoreline from here and the roosting ponds are very close by. Turn left and you will quickly come to a two-storey hide that gives good views of thousands of birds which have been driven inland by the rising tide. I estimated about 2500 Black-tailed Godwits and 500 Brown-headed Gulls. Other species seen in smaller numbers included Common Redshank, Marsh Sandpiper and Pacific Golden Plover. I was surprised not to see any ‘peeps’ or Charadrius plovers. 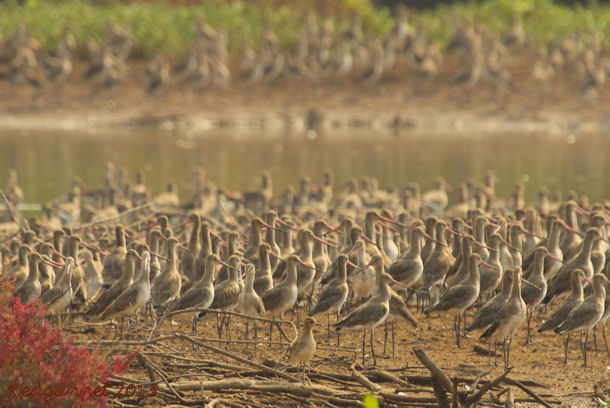 Most of the birds were crowded onto the bare earth of the roosts, but a few Common Greenshank, Black-winged Stilt and Wood Sandpiper poked around in a bit of open water just in front of the hide.
I followed the path further into the mangroves and found that the other hides and screens had been allowed to fall into disrepair. A fleeting glimpse was had of a few Common Ioras and a Plaintive Cuckoo flew across the path and stopped to look back at me. A ditch had attracted some Great Egrets and three Painted Storks. 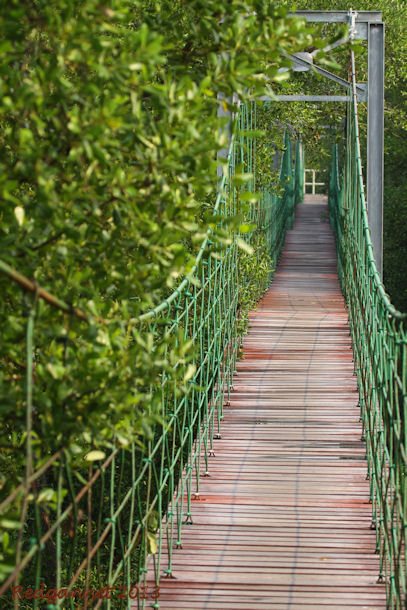 The best find in the mangroves was the canopy walk. The mangrove canopy is not actually very high, but the raised walkway put me level with the Golden-bellied Gerygone which had been wheezing at me all morning. The walkway is not mentioned at www.thaibirding.com, nor is it shown on the Google Earth picture which needs updating. Follow the path through the mangroves and you will find it easily enough. 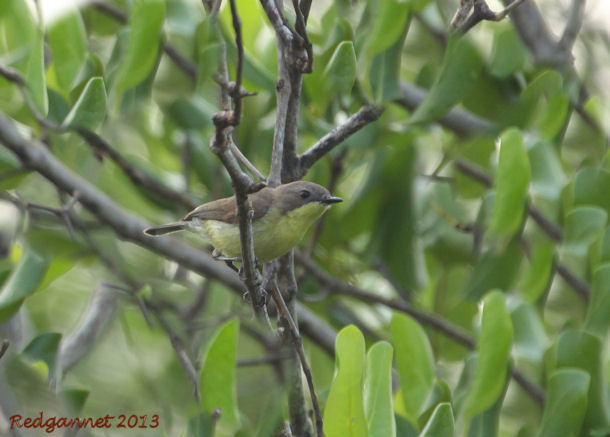 The walkway leads out onto the sea path and back along the shoreline. A hide has been built out from the shore at Google Earth ref; 13°30'55.83"N 100°39'27.95"E. It had also seen better days and there was a bit of maintenance outstanding. It overlooks a protected zone which has been sheltered from the ravages of wave and tide by a barrier of bamboo stakes driven into the mud about 100meters from the shore. Many of the stakes have been lost to the tidal action and float in a matt against the artificial, rocky shoreline. Common Sandpipers find good pickings amongst them. 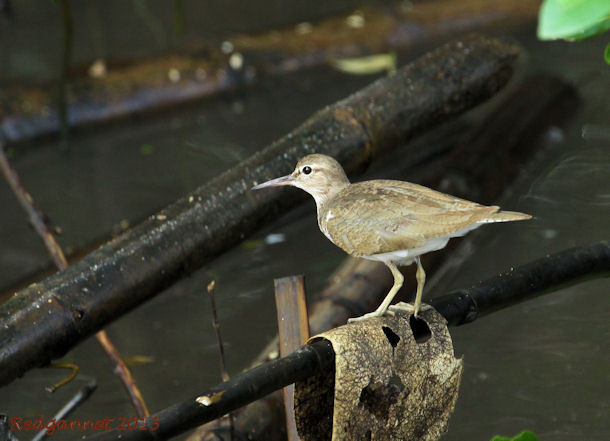 I assume that the barrier has been put in place to provide conducive growing conditions for the mangrove which has extended its reach along the shoreline in both directions. Since the Google Earth picture was taken, the areas behind the barriers on both sides of the pier have almost filled up with mangroves. 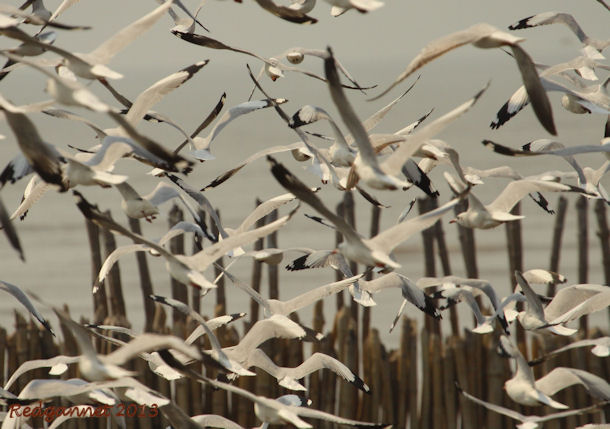 At last the mud began to show. Three Pacific Golden Plover and two Common Redshank came down and just stood, looking at each other. A few Little Egrets and pond herons chased fish and crabs while a Black-capped Kingfisher swooped down to pick something from the surface of the mud. Eventually more plovers and redshanks flew out from the mangroves and with the benefit of more pairs of eyes, began to feed. A few Eurasian Curlew showed up at the same time as a large flock of Brown-headed Gulls. They were followed by Common Greenshank, but still there was no sign of the Bar-tailed Godwit.

I reckoned that the small area un-colonised by mangroves would not be big enough to accommodate the godwits and that they would probably wait until the tide receded beyond the barriers and then come out to feed on the huge expanses of mud that would be available to them at low tide. I headed for the pier as the first of the godwits began to fly out from the sanctuary of the mangroves. By the time I reached the pier, they were streaming out in small flocks and the open areas of mud quickly filled with gulls and godwits. 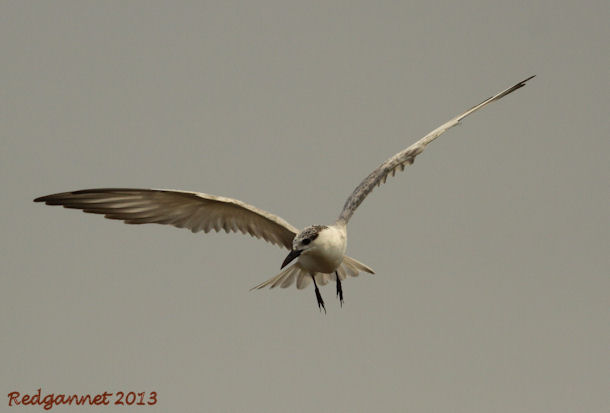 Visit the dedicated Oriental page for more from Thailand, including; Lumphini Park and Pak Thale
Posted by Redgannet at 23:09