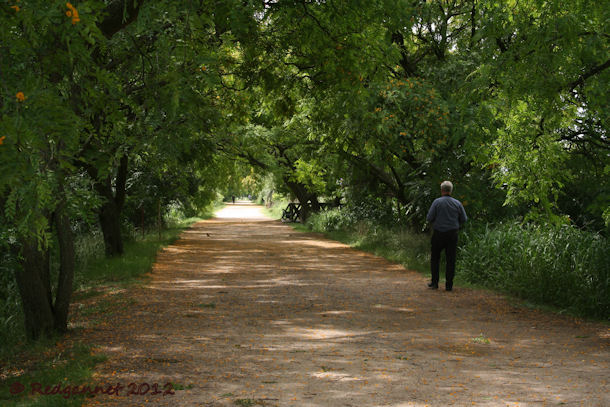 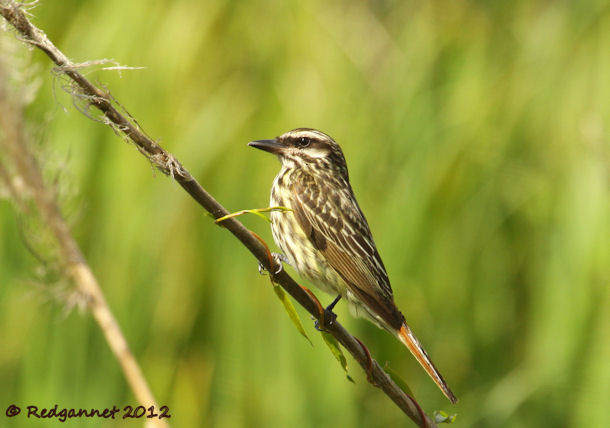 What used to be lakes on the reserve had now silted up for the most part, so swathes of reeds reached out on both sides. Green-barred Woodpeckers were common and fed from the ground as well as in the trees that formed a covered avenue. 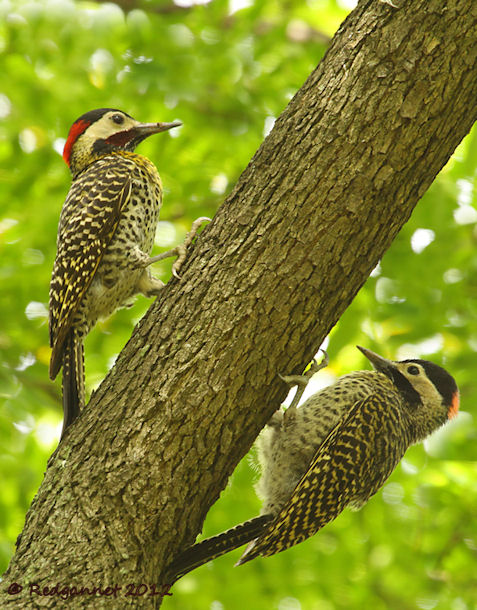 A streaky finch was bringing nesting material to line a nest cavity in one of the trees. Noticing the yellow shoulders we pencilled in Grassland Sparrow, but the streaks and the cavity-nesting must make it a Saffron Finch. 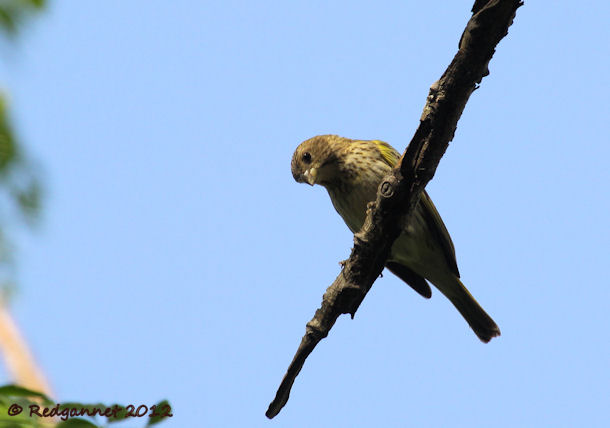 Towards the end of the straight, the path passes through a small area of Pampas Grass. Just beyond here, there is a secondary gate which recently appears to have become an official entrance and exit (at Google Earth ref; 34°35'56.65"S 58°21'44.70"W). To exit bear left (this is often a good place to find Gray-necked Wood Rail. We had seen one on the path just before reaching this spot), to continue, keep to the right. 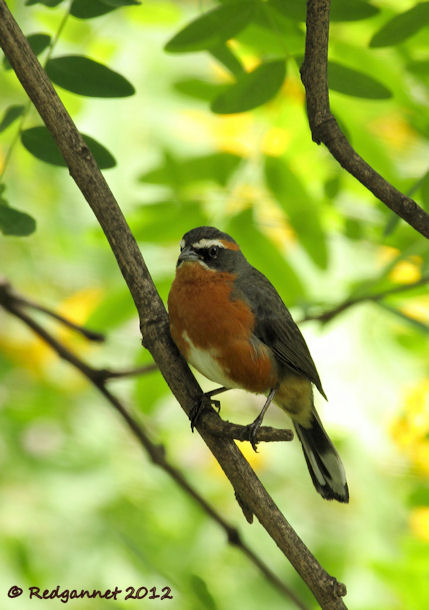 We followed the path around to the right and headed towards the river. A Black-and-rufous Warbling-Finch sat for a moment. In a deep trench on the left we found a few Yellow-billed Teal and encountered this rather sizeable lizard. 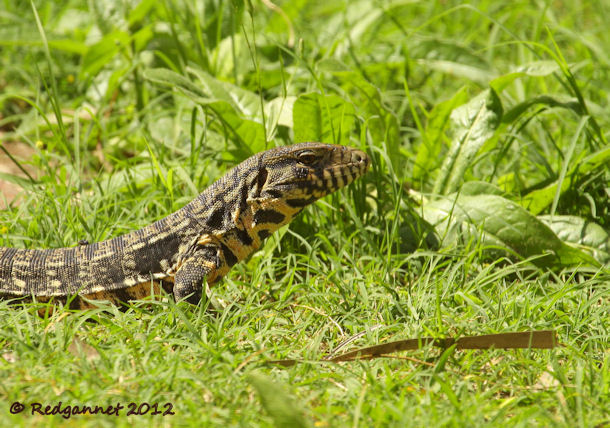 Most of the common birds were living up to their reputation and were easy to see. Rufous Hornero, Rufous-bellied Thrush, Picazuro Pigeon and Eared Dove are all gimmes here. A brood of Chalk-browed Mockingbirds waited for their parents to bring food and were rewarded for their squealing. 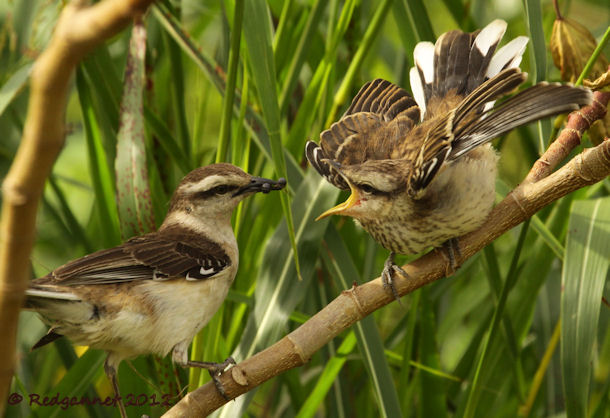 The path now tracked along the bank of the Rio Plata and though there was not much to see out on the water, we both remarked on how many birds we were seeing inland on the reserve. Not just species, but lots of individuals too. Low in the grass by the path was a Grassland Yellow-Finch. 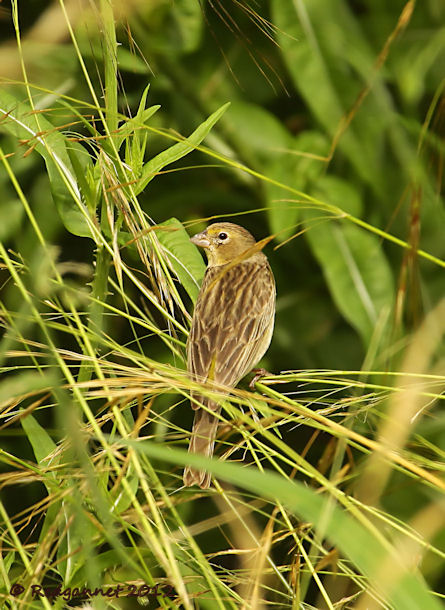 A few Brazilian Guinea-Pigs (Cuis) braved the edges of the path, but were quick to dive for cover as we approached. 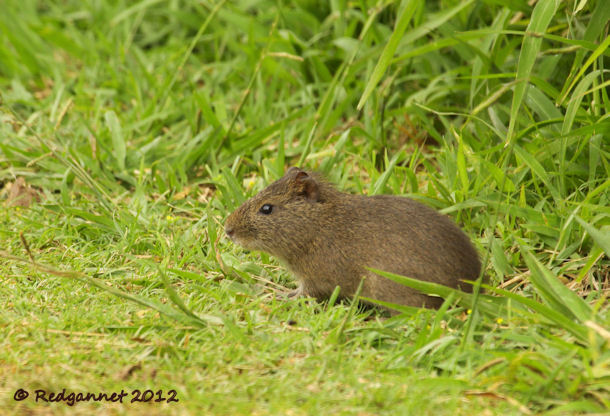 Rufous-collared Sparrow and Black and Rufous Warbling Finches continued to be common along this stretch and Morton rounded out his mission to find lifer Flycatchers for me with a Yellow-browed Tyrant. 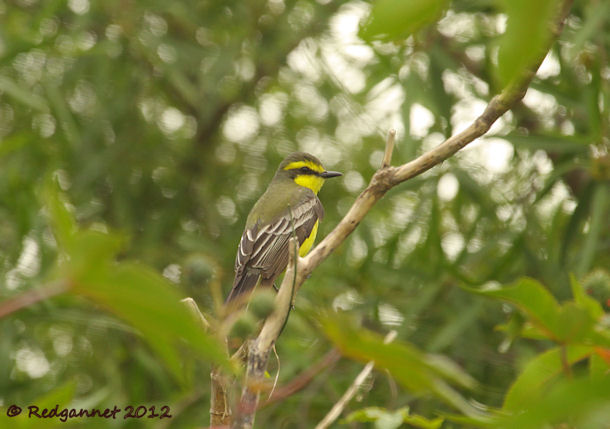 The day was wearing on and we took the quicker, diagonal route back to the Visitors’ Centre. The circuit had taken about 4 hours and had covered 4.5kms.We speeded up for the last section, unsure if there was a closing time at the gate, but a few birds were still able to slow us down. A Gilded Hummingbird sat nicely close to a viewing platform. 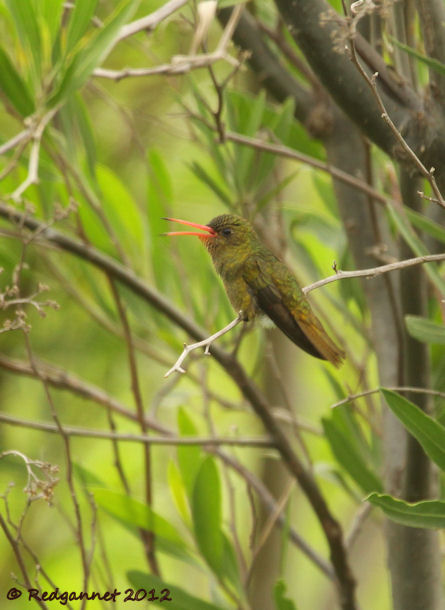 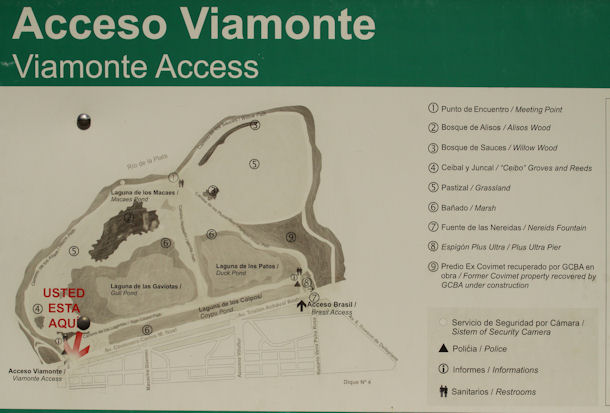 Costanera Sur Ecological Reserve covers more than 800 acres on the bank of the Rio Plata in Buenos Aires. It started as a magnificent promenade where the good people of BA could come to bathe. It lost favour as the water quality in the river deteriorated and swimming fell out of fashion. Landfill and reclamation separated the promenade from the riverbank and subsequent silting gave Nature the chance to colonise and flourish. The reclaimed area became a protected reserve and was awarded Ramsar status in 2005.

The promenade still exists, though it is now over half a mile inland. It makes a fine walk on a warm afternoon, adjacent to the Ave Int. Hernan M. Geralt. For 2kms, the wide pavement looks down on a stretch of marsh and reeds. A few years ago rains would raise the level sufficiently for open water to attract many species of duck, but the water is much reduced now. Only tiny areas at the south-eastern end remain free from reeds but are likely to silt up altogether in the future. 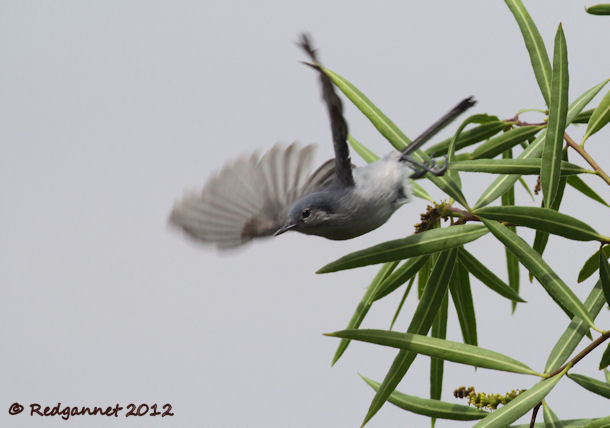 Masked Gnatcatcher
For previous posts from Costanera Sur and the vicinity, follow the links below;
http://redgannet.blogspot.com/2011/05/costanera-sur-assessment-on-arrival.html
http://redgannet.blogspot.com/2011/05/costanera-sur-pre-departure-buenos.html
Visit the dedicated Central and South America Page for more posts from Argentina including Ribera Norte and Parque Tres de Febrero
Posted by Redgannet at 17:08