The story goes that many years ago, a gentleman living in an apartment overlooking Central Park in New York felt that any cultured chap should be able to witness the birds as mentioned by Shakespeare from his own window. To this end he took it upon himself to import House Sparrows (Hamlet) and Starlings (Henry IV) from England and released them into the park. Why these two should be selected instead of the Lark (Romeo and Juliet), or the Throstle and the Rosset (Midsummer Night’s Dream), we can only guess. This well intended, but misguided, patronising act resulted in a combined exotic population in the USA pushing 6 billion. I don’t know what name Stratford’s finest was working under when he wrote, ”Xena – Warrior Princess”, but it was she that caught my eye rather than the starlings and sparrows this morning. 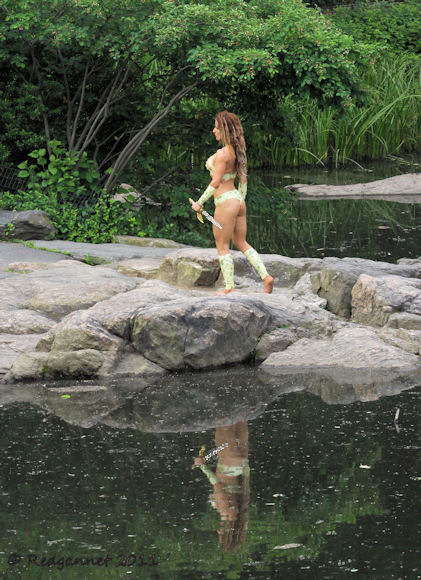 The park was laying back and smoking a metaphorical cigarette in the afterglow of migration. Few birds were moving or singing in the warmth of the first day of June. But this is Central Park and there is always something to see. 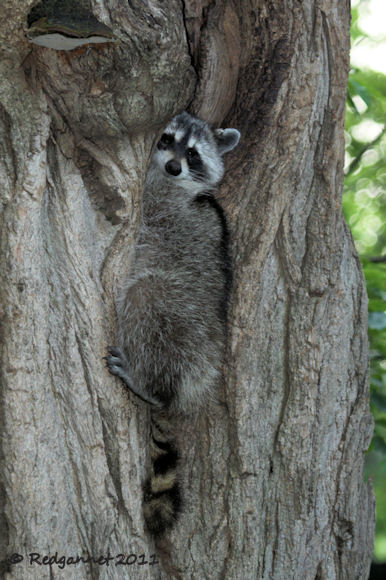 Strawberry fields was very quiet until I came upon a Raccoon who was heading home for the day. It squeezed into the crack in the tree and was gone. 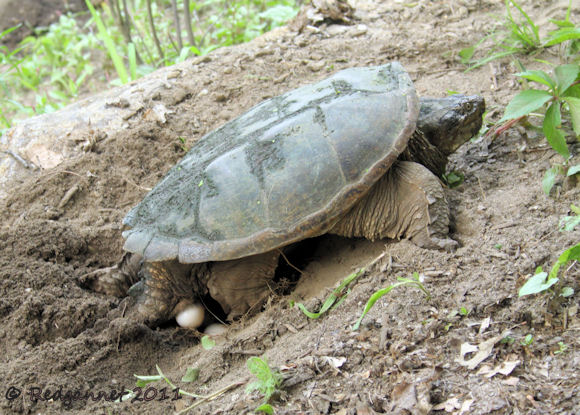 At the bridge that crosses into The Ramble from West Drive, a Snapping Turtle had dug a nest and was laying eggs into it. She used her back right leg to carefully position the freshly laid egg with the others. It was charming to witness an animal with a reputation for being so aggressive, behaving so gently. She laid perhaps 20 as I watched and from a brief glimpse into the nest, I would estimate that she had produced 30-40 eggs in total. The Green Wednesday volunteer group were taking a walk before beginning their shift as unpaid gardeners and deserve a mention for working so hard on a hot and humid day. 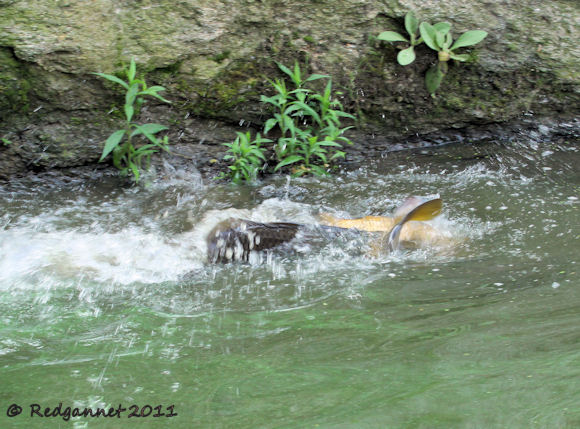 The Carp had started spawning in the warm conditions. In the margins and shallows of the lake, furious splashing indicated that the male was chasing the female and thrashing against her to stimulate her to release the eggs for fertilisation. An unfortunate trait of carp spawning is that the eggs are quickly eaten by the accompanying fish in the melee. Once the feeding starts, the successful breeders, being of a forgetful nature, join in and start to eat their own eggs. The advantage of the frenetic spawning activity is that the eggs are spread in the splashing and enough are missed to mature and hatch. 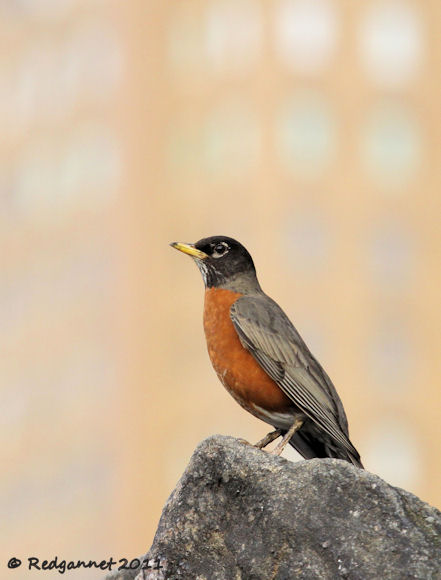 Although the migration was well past its peak, there were some birds that are either resident, or have chosen to stay and breed in the park. American Robins were busy feeding young and gorging themselves on early ripening fruit and florescences. This one is a real city bird with some window bokeh. 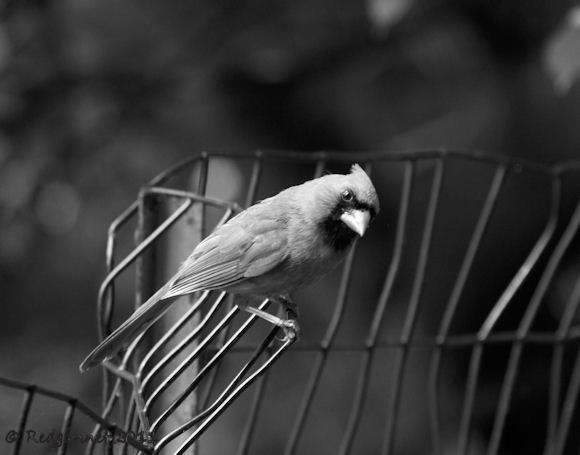 My camera took it upon itself to go monochrome just as I encountered a Northern Cardinal, one of the most strikingly coloured birds on the continent. Perhaps it was just as well, as this one is beginning to show the signs of strain from having to attend to a growing family. He seems to have lost his lustre. 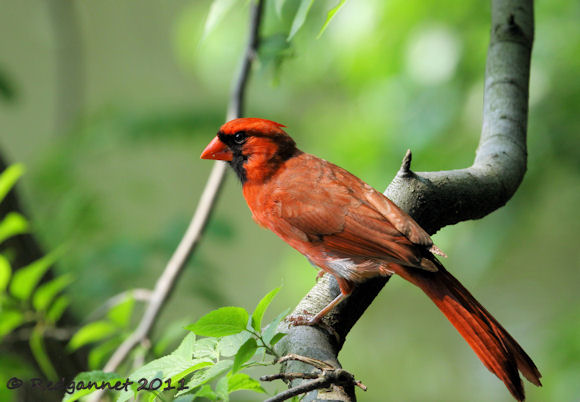 In The Ramble, at the spring above Azalea Pond, a Blackpoll Warbler showed briefly, but did not approach closely. Here, I met my first birder of the day, Rikki (sic) who suggested that a few late warblers had been seen on the point.
The Point is a spit of land jutting out into the boating lake. Rikki pointed out the song of a Warbling Vireo, but I was not able to see it until I moved further along the spit where three more vireos were singing.
A locustella tree had finished flowering, but was still attracting a few stragglers. One of each Magnolia Warbler, Yellow Warbler and Canada Warbler were seen.

The female Red-tailed Hawk was sitting on the edge of her nest on the building overlooking the park at 75th Ave. I watched for a while from the model boat pond and listened to the updates from Arlene. The new female was variously called Lima or Ginger, depending on which group you adhere to. I had known her as Ginger since she came on the scene after Lola’s disappearance, but this link will take you to the Lima camp. Arlene told me that there were two chicks which had hatched 10 days before (so around 21st May). Pale Male was not to be seen today; perhaps he was resting in the park through the heat of the day. 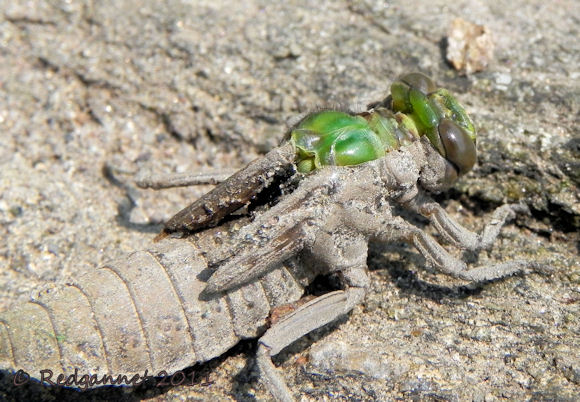 A dragonfly larvae had crawled from the lake and looked as if it was about to burst from its case into its adult form. Using the word “burst” possibly implies an explosive escape from its outer skin and is thus a bad way to describe the protracted procedure. I knew that it would probably take a long time to happen, so I settled down and found a comfortable place to watch from. When I looked back, the case had split and the head and upper back were already showing. Thinking that the ode was in a rush to emerge, I took off my socks and shoes, rolled up my trousers and got into the water for a closer look. 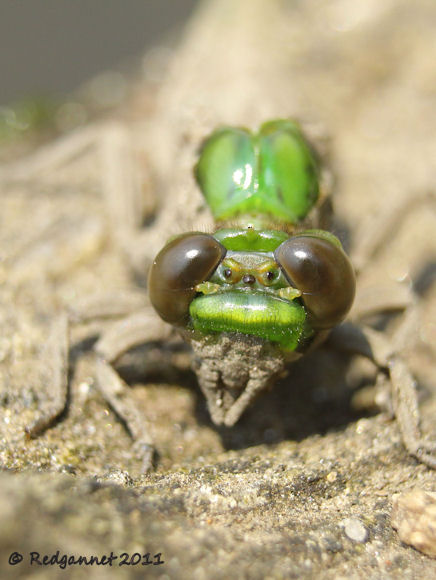 I felt a little conspicuous and more than a little silly as I waited for something else to happen. This being New York, my behaviour barely registered with the many visitors to the park and I certainly didn’t think that I would distract anyone from the least known character of The Bard of Avon (writing as Arthur Balsam). I wonder if Xena – Warrior Princess would have been impressed to hear that I habitually carry a Canon? 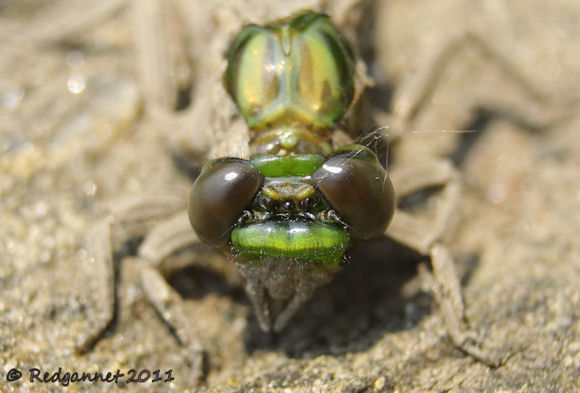 Sadly this was as far as we got. After two hours, I brushed off the leeches wandered off to get an ice-cream. On my return, the dragonfly’s back had changed colour slightly as it hardened, but there was no further progress and eventually, I had to give it up and return to work.
Species seen; 28

Also from New York is a report from Jamaica Bay;
http://redgannet.blogspot.com/2010/03/approach-to-broad-channel-train-station.html