The beautiful, clear blue skies and picture perfect mountainscape of the Huachuca Mountains belied the guard’s grim news of the “wall of fire.” I later realised that I had misheard and he was referring to the ‘Wallow Fire’ which was raging across Arizona County to the north-east of us and had burned 600 square miles in the state's worst ever wildfire. In a very military style, he also failed to answer the question that I did not ask. 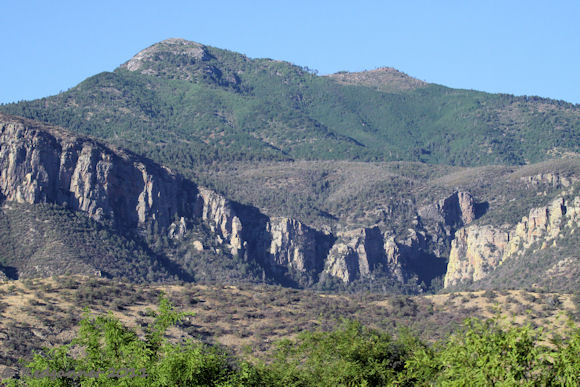 I had been refused entry to Fort Huachuca on the grounds of extreme fire risk, with spots already burning in the mountains. I glanced over his shoulder at the pristine scene behind him and felt cheated. The information that he did not volunteer and which none of the guide books mentioned was that as a non-US citizen, I would not have been allowed unsupervised entry anyway. 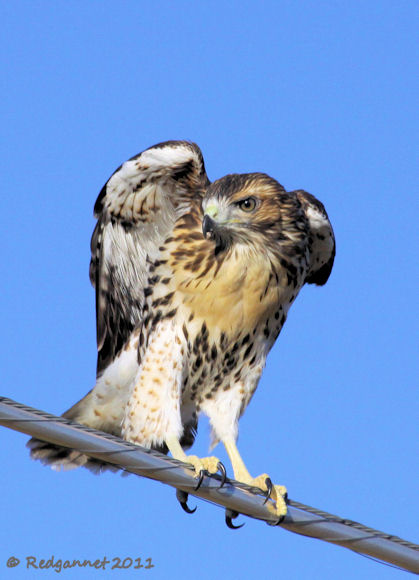 Red-tailed Hawk
The approach to Ramsay Canyon, a few miles down the road was also barred and I subsequently discovered that the entire Coronado National Forest had been closed to guard the tinderboxes against fire. It seemed incongruous then to see a man selling fireworks at his street-side stall. 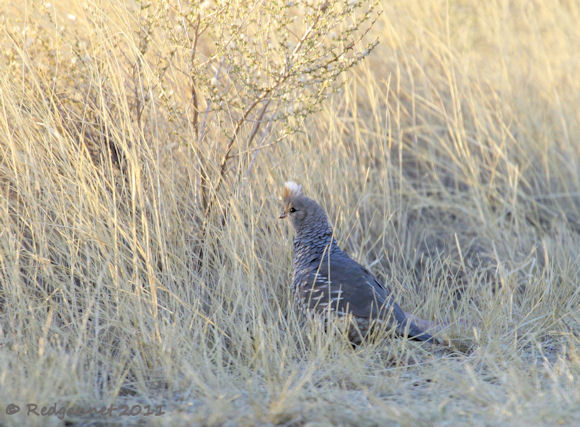 I needed to salvage the day and pulled in to consider my position. I was lucky enough that a covey of Scaled Quail called this hard shoulder home. San Pedro Riparian National Conservation Area is within 10 miles of the military base’s main gate, so San Pedro House (on the 90, between Sierra Vista and Bisbee) became my focus. Huge success has been had from conservation efforts here though water extraction for people and farming still threaten to suck the river dry. 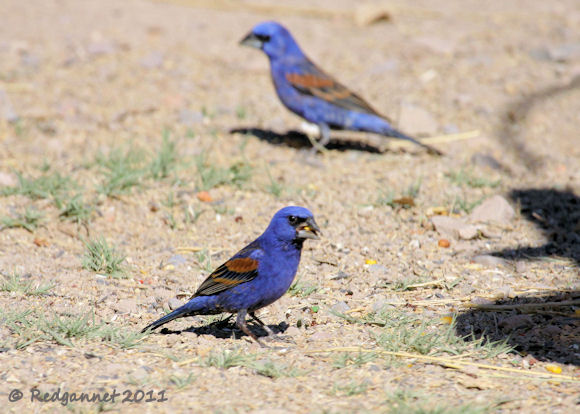 The birds were immediately obvious as I pulled up in the car. Feeders in front of the house attracted Blue Grosbeak, White-winged Dove, Gambel’s Quail and House Finch. A Grey Hawk and a Swainson’s Hawk fought for air superiority in the sky above. 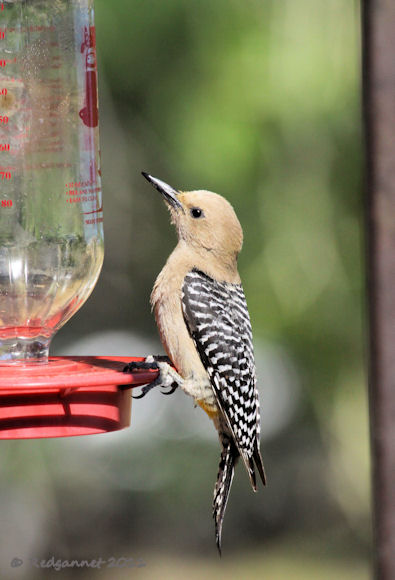 Gila woodpeckers bullied Black-chinned Hummingbirds for a place at the sugar water feeders.

Across a very dry meadow is the San Pedro River which was barely more than a trickle today. Song Sparrows crept along the water’s edge collecting food and Yellow-breasted Chats called from the trees. Vermillion Flycatchers were common with a bright red male feeding two fledglings. 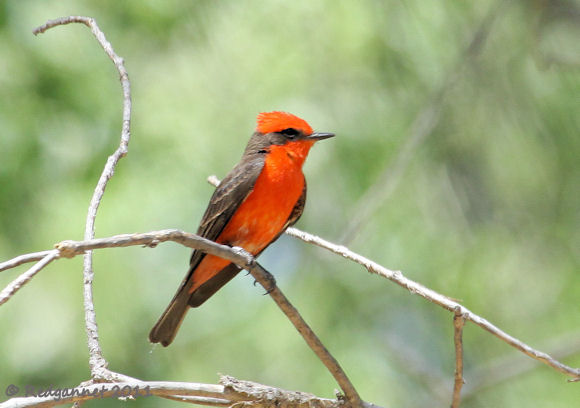 Myarchus flycatchers were fairly common in the cottonwoods along the bank. Ash-throated and Brown-crested Flycatchers were reported for the day on a sightings board at the house, but I could only be sure of the Brown-crested Flycatcher. The harsh light of the Arizona sun washed the colour out of the birds and the subtle difference in the strength of yellow shading was not reliable. I had to make my selection based on size of bill.

An Empidonax flycatcher defeated me. It was a toss-up between a Pacific Slope Flycatcher and a Cordilleran Flycatcher. A gut reaction made me think Cordilleran, but Pacific Slope was reported on the sightings board. It made no sound to give me a clue one way or the other. 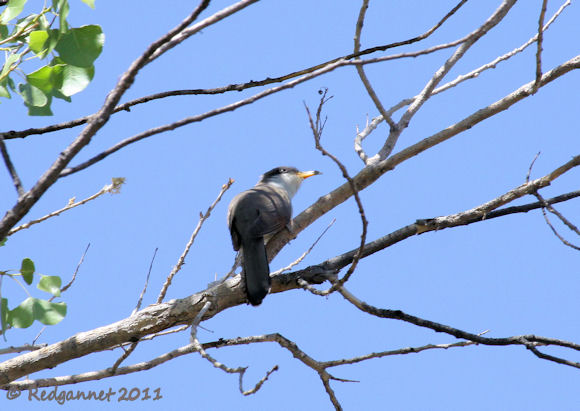 Green Kingfishers are said to inhabit the lake downstream of the house. I was not able to see one today, but made up for that dip by finding a Yellow-billed Cuckoo which allowed me a good clear look. Western Kingbirds, Northern Rough-winged Swallows and Barn Swallows were also seen around the lake.

The wind was picking up now and it brought with it a waft of wood-smoke. I looked across towards the mountains to see a large plume rising into the air and had to retract my earlier unkind thoughts about the guard at the gate to the fort. 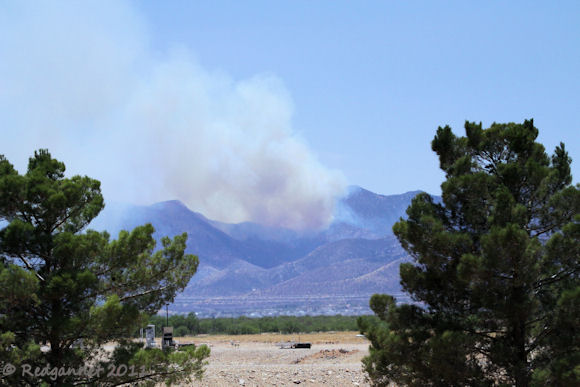 Back at San Pedro House, I stopped a while for some cold drinks and a chat to seek some information from Dwight and Chris Long, volunteers at the conservancy. Dwight told me about the Desert Grassland Whiptail that I had been seeing a lot of. The lizards’ population is entirely female and they are able to lay fertile eggs without having to bother with male interaction, although pseudosexual mounting improves their reproductive success. Chris provided me with an address to arrange a guide to accompany me into Fort Hauchuca for next time info@VisitSierraVista.com 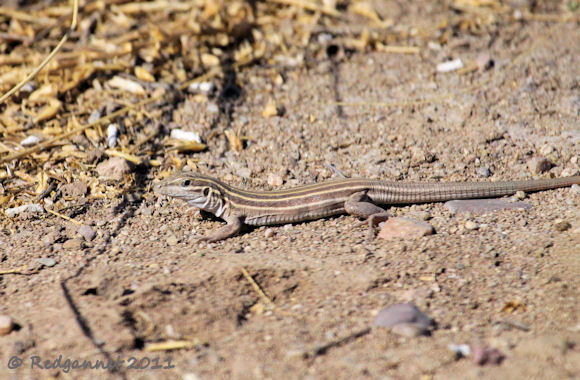 With all the Coronado National Forest sites closed, the Arizona afternoon stretched ahead of me, hot and flat. All the canyons were barred, so I was limited to the lowlands. The route to Patagonia would be a ridiculous detour, but I am nothing if not ridiculous, so I passed back through Sierra Vista and took Route 82, west through the grasslands to Patagonia. 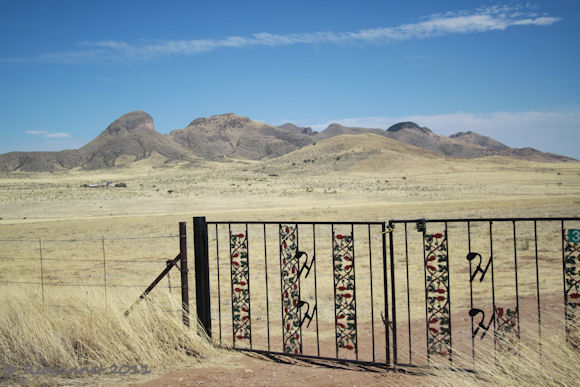 The fence lines along the way gave some pathetic shade to Grasshopper Sparrows as the mercury topped 100C. Pronghorn Antelope out on the Sonoita grassland could gain no such relief and had to soak up the full power of the sun.

When in Patagonia, visit Wally and Marion Paton’s home on Pennsylvania Avenue. Sugar water is put out to attract hummingbirds while seed feeders bring in other species. A shade and seating are provided and all are welcome. Please leave a donation in the box provided to help cover the cost of the sugar and feed. 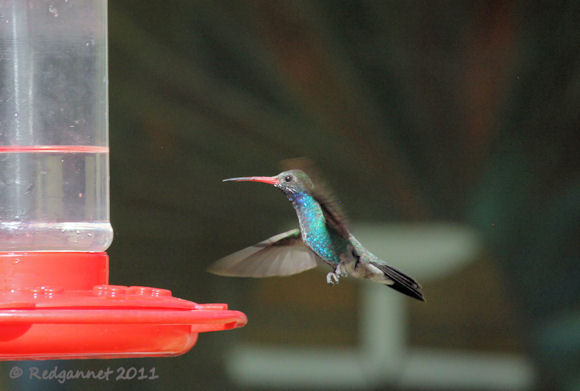 Broad-billed, Black-chinned and Violet-crowned Hummingbirds frequented the sugar water feeders while I watched. The seed feeders were used by Lesser Goldfinches, Blue Grosbeaks and Brown-headed Cowbirds. On the ground, White-winged Doves and Abert’s Towhees fed from loose scattered feed.

A report in the recent sightings book mentioned a Streak-backed Oriole at a feeder in a private address near Lake Patagonia. I stopped outside the house where the oriole was said to frequent the orange feeder. An oriole was feeding as I arrived, but this bird was a Hooded Oriole. The Streak-backed Oriole didn’t show and I moved on to Madera Canyon. 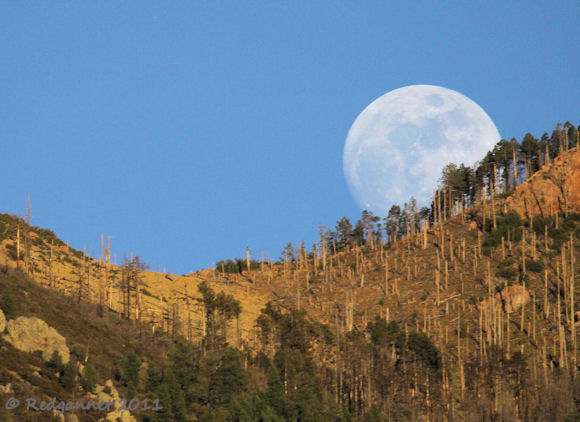 Madera Canyon was closed from the Proctor Road Parking Area. Nevertheless, Black-throated Sparrows were seen on the fence and Common Ravens refused to become Chihuahua Ravens no matter how much I stared at them. Madera Canyon in the Santa Rita Mountains is such a gorgeous place and holds such wonderful birds that I considered ignoring the traffic cones that barred my way. Elegant Trogon and Elf Owl would almost certainly be seen a mile up the road, but I was too much of a wimp to chance it. Still, I was able to settle for watching the Black-tailed Deer crossing the meadow and the moon rising through the trees on the upper slopes.
I set the alarm for 02.30 to get to Fort Huachuca when the main gate opened at 05.30. If I had consulted this website, I would have been warned that the forests and mountains were closed and could have stayed in bed and found somewhere nearer to Phoenix for the day. But then I wouldn't have found 3 lifers for the day.
The list below is a cumulative one for the whole day including those seen while driving.