Take a run up. If you stumble, it’s OK. If you can get close to the pronunciation, most Gauteng birders will know what you mean. 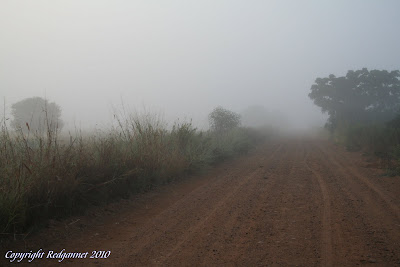 Zaagkuildrift Road, at Pienaarsrivier, was veiled with a soft mist when I arrived at first light this morning.
Reports by G.L. from earlier in March of Lesser Moorhen, Baillon’s Crake, “…hundreds of Black-winged Pratincole” and a total of 148 birds made this a very tempting outing.
The dirt road runs east (Google Earth; 25.11.55 S / 28.17.39 E) to west for nearly 30 kilometers through prime thornveld habitat to the village of Kgomo Kgomo and a flood plain at the confluence of 3 rivers, where a raised road bridge gives a good view out onto the marsh (Google Earth; 25.09.54 S / 28.04.59 E). See http://www.sabirding.co.za/ for directions and a good site description. 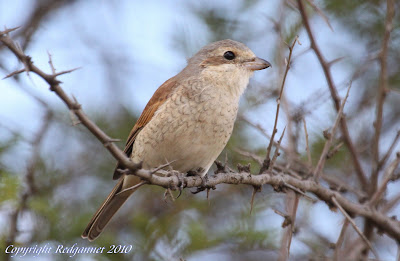 The first birds were shrikes and the family was well represented today. A Lesser Grey Shrike perched on a wire fence, a Long-tailed Shrike was calling from the top of a dead tree and a Red-backed Shrike was watching for his breakfast from a snag in an acacia tree. 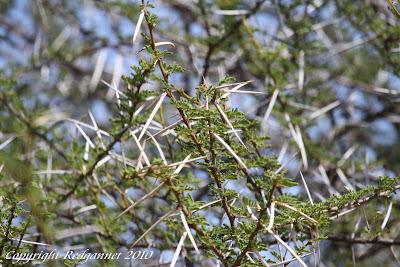 Acacia was very much the theme of the day with thornveld species predominating for the drive to Kgomo Kgomo. For the first kilometre or so acacia bushes dot expanses of grassland. Record rainfall this year has left the grass tall and lush, concealing all kinds of avian treasures. The bushes become larger and more concentrated as I progressed west.
A dam which I knew to be out to the left was out of view in the mist, 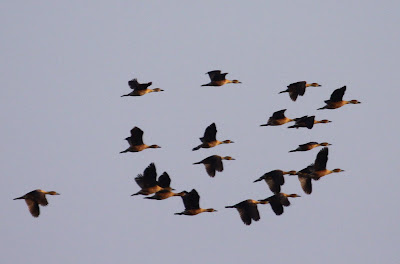 but White-faced Whistling-ducks could be seen flying over and an African Fish-eagle called through the fog. A pair of Hamerkop flew off as another car went by.
For much of the day, I was alone on the road. It would be easy to fall into a sense of isolation and forget about traffic. Occasionally another car would hurtle past, reminding me that I was on a public highway and not to stop in the middle of the road.
I parked up and decided to bird on foot for a while. It was easier to pick out birdsong and movement in the mist which was dulling the sound as well as the light. Immediately, this approach paid dividends with a couple of Burnt-eared Eremomelas which were sharing the leafy crown of an acacia with a Long-billed Crombec and a Red-billed Hornbill. Across the road, the fluty song of the White-browed Sparrow-weaver contrasted with the coarse chatter of a small group of Southern Pied Babblers. A tuneful whistle came from a White-throated Robin-chat.
Weaver nests, hanging from the thorn trees, accessed from beneath and without an entrance tube were made by the Village or Spot-backed Weaver. 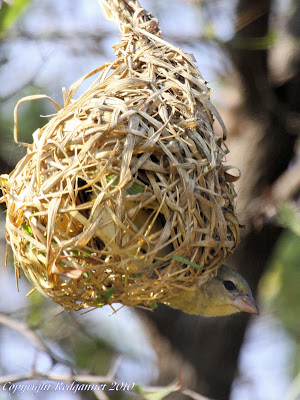 One was in the process of construction by a bird that had lost his breeding plumage. The summer is almost over in Southern Africa by March. 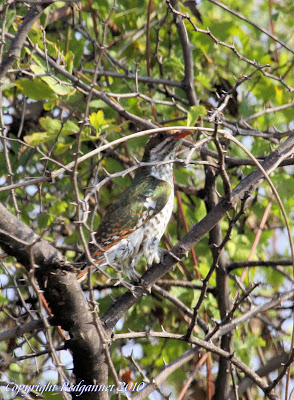 Nearby, a Diederik Cuckoo watched. The cuckoo parasitizes Spot-billed Weavers, but it was possibly a bit late in the season for it to take this bird as a serious proposition for a step-dad.
Crested Francolins ran along the verge in front of the car rather than ducking into the vegetation. Swainson’s Spurfowl preferred to fly to evade on-coming traffic. 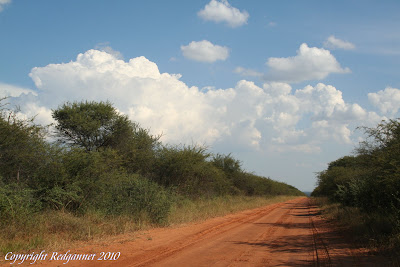 As the bush became thicker, Crimson-breasted Shrikes would dart out into the road to catch insects from the dirt surface.
Fences that run the length of the road on both sides are unintrusive on a birders experience. The shrikes seemed especially fond of them as hawking perches. Mariqua and Spotted Flycatchers appeared to approve too. 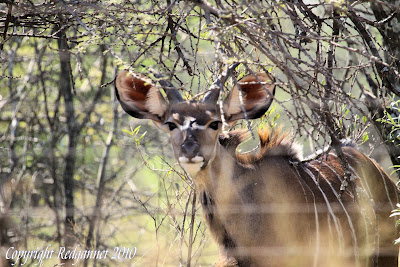 Occasionally a bigger, sturdier fence would indicate a game reserve and larger mammals such as Blesbok or Kudu might be seen.
The birdlife was certainly prolific and my list was growing with Chestnut-vented Tit-babbler, Black-crowned Tchagara and Crested Barbets among the thorn trees and Glossy and Burchell’s Starlings on higher perches. 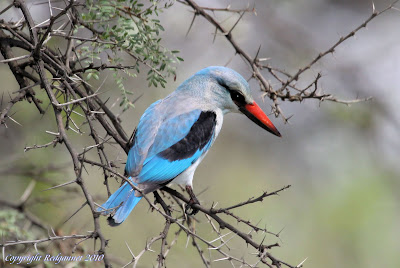 A flash of blue and black was a Woodland Kingfisher. It was perched above a tiny puddle which was far too small to contain fish. The Woodland Kingfisher though, does not plunge-dive like many of it’s family, it more commonly prefers insects, small reptiles and amphibians. Occasionally it will take fish and even small birds. It sat for a picture before flying off into the woodland. Before I could set off again small birds started arriving at the puddle to drink and bathe. 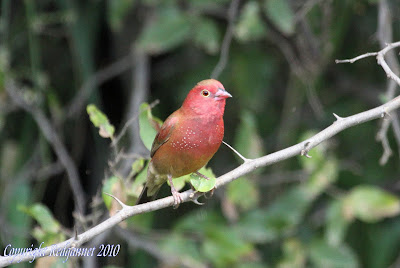 Perhaps they had been holding back from the potential threat of the kingfisher. First came Red-billed Firefinches and Blue Waxbills, then Violet-eared and Common Waxbills. A male and a female Jameson’s Firefinch were followed by 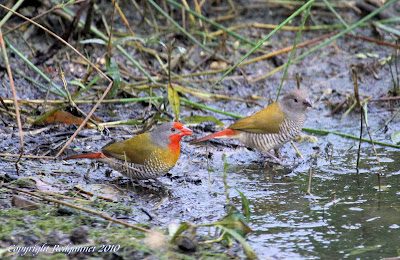 Mr and Mrs Melba Finch and finally a small flock of weavers. In their non-breeding plumage, but with their large bills, 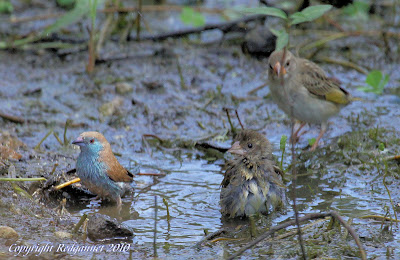 I suspect that they were Spot-backed Weavers.
Shortly before the village, the acacias thinned out allowing the grass to take hold again. A small pool held Greenshank, 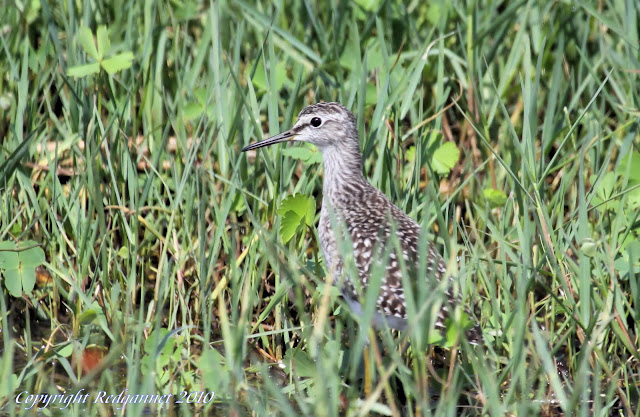 Wood Sandpiper and a couple of Hamerkop. A spotted Flycatcher watched for insects on a gate close by. Beyond this was the village and a wide area of shorter grass. This is where I was expecting to find “…hundreds of Black-winged Pratincole.” Sadly there were none. I stopped regularly, scanning the whole area on both sides of the road, but all I could see were Crowned Plover. 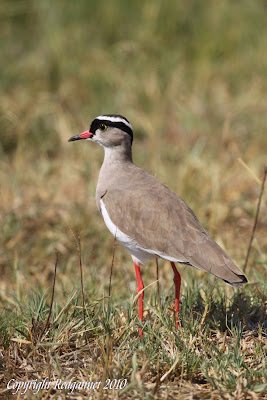 There were “hundreds” of them, but I must give G.L. more credit than that.
The fences in the village were productive with Red-headed and Scale-feathered Finch.
I turned left on to the tarmac road and parked on the verge on top of the bridge. In The UK, this would be deemed poor roadsmanship. Here however, it seemed accepted by the limited traffic.
Before me was the marsh remaining from the contracted floodplain. It should have been the scene for a sighting of the Lesser Moorhen and Baillon’s Crake. Again though, I had been “gripped” by G.L., as I found neither. But sitting patiently waiting brought it’s own rewards. From my vantage point on the bridge, I was able to look down on a tangle of reeds and lilies in the marsh. There were Common Moorhens and Blacksmith Plovers feeding here and larger wetland birds in the distance. Yellow-billed Storks shared the marsh with herons and egrets. Most notably a good number of Black Egrets.
Back in the foreground, a skulking presence in the edge of the reeds caught my eye. As I watched, an African Rail crossed an open patch into the reeds on the other side. 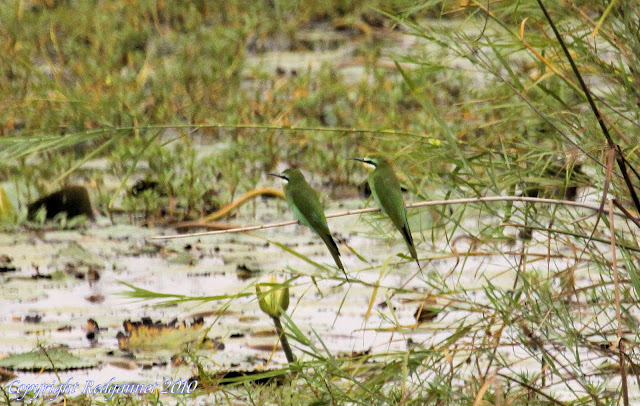 Just above it resting on a reed stem were 2 Blue-cheeked Bee-eaters. They were a little distant, but just about worth a shot.
As a logistical operation, it may have been worth me getting to the marsh much earlier to give myself a good chance of the moorhen and crake. The vantage point from the bridge looks directly in to the rising sun however, so I would probably still prefer to bird the road with the light behind me in the morning.
Retracing my steps in the afternoon put the sun over my shoulder again as I returned to the eastern end of Zaagkuildrift Road. 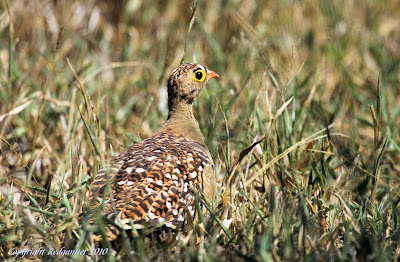 A double-banded Sandgrouse was hunkered down in the roadside grass, Shortly before I reached the end of the road, a small bird of prey caught my attention from the top of an acacia. It was completely dark with the only apparent colour being a red cere on a small beak and long red legs. Red-footed Falcon occurred to me but the long legs ruled this out. My best guess was a melanistic Gabar Goshawk.
The biggest spectacle of the day came as I was driving back to the hotel. Just north of Pretoria, on the N1 driving south, was a big flock of Amur Falcons (I was driving, not the falcons). A short way beyond was another flock and then another. A bloom of insects had attracted them to this spot and they were catching them and feeding in mid-air. Again my roadsmanship was called into question as I stopped on the side of the motorway to watch. At a guess, I would say that as many as 600 falcons were feeding within a distance of 400meters.
I didn’t get close to G.L.’S 148, but a great day was had just the same.

Another early morning found me on the predictable pilgrimage to Marievale. This post is my experience of the reserve. I refer you again to the excellent http://www.sabirding.co.za/ for a detailed write-up.
I was hoping for some gratuitously pretty pictures of Malachite Kingfishers, but ended up chasing terns instead.
As ever I started along the road which bisects the reserve from west to east and arrived at the same time as the sun poked through the low cloud. 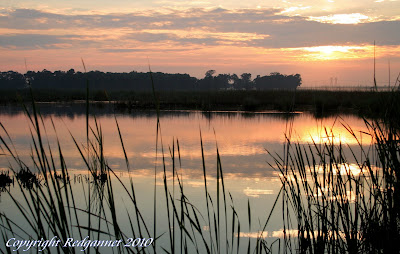 White-winged Terns were already up and scanning the water’s surface for titbits. A couple of Black Crakes were feeding on a mat of weed watched by a 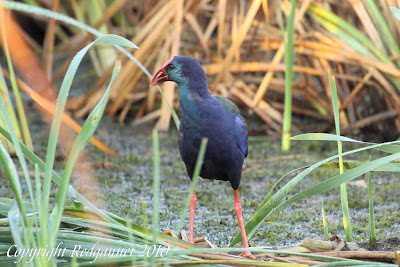 grumpy African Swamphen who would chase them off if they came too close.
The left turn at the junction heads northish towards the picnic area and reserve gate. 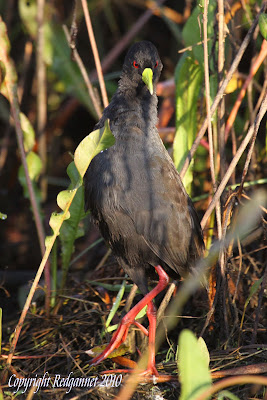 I stopped for another Black Crake but was disturbed by another car. Being a lovely Sunday morning, local birders were out and about too, so I had to pull across on the single track road to let them through. As I checked my mirror to reverse back to the crake, I saw some shapes in the shadows at the side of the road. 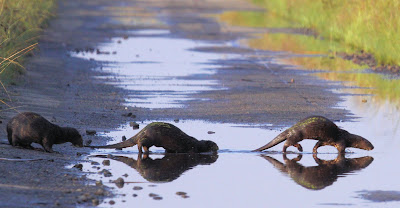 I opened the door and looked back to see 3 Spot-throated Otters cross through a puddle and into the reeds.
The grass is high at Marievale this week. The roads have become rutted after all the rain. Driving a tiny car with very little clearance was quite a challenge in some spots.
Along the causeway, a Fiscal Shrike was feeding on a small frog that it had anchored onto a peg.
The Malachite Kingfishers were in residence, but were not posing for pictures today. In the rank grassland, weavers in their non-breeding drabness were flocking in their hundreds. 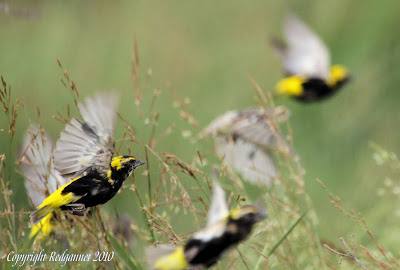 A flock of Yellow-crowned Bishops looked like a swarm of huge bees. Levaillant’s and possibly other cisticolas were common here too.
I crossed the causeway and scanned the large mound of spill. 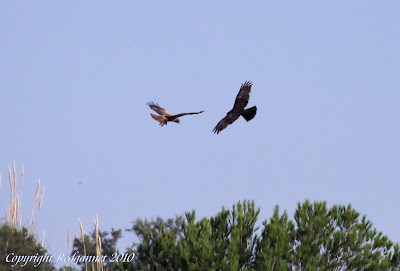 Catching up-currents from the steep sides were 2 African Marsh Harriers. I had nearly reached the Shelduck Hide when I noticed a small bird in the road. It was distinctive with it’s dark plumage with striated flanks, a red bill and white goggles. 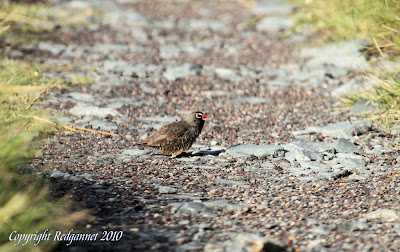 These features all added up to an African Quailfinch.
At the hide some Red-eyed doves were roosting on the roof. They were joined by a Pied Kingfisher as I arrived, but he was not keen to stay as I approached. The Shelduck Hide gives out onto open water which was very quiet today. Only a few coots, cormorants and 3 Great Crested Grebes were showing. The Goliath Heron flew over but settled out of view. On the way back, I stopped at the causeway to get out and walk for a while. The terns were coming over and I wanted to get a picture. 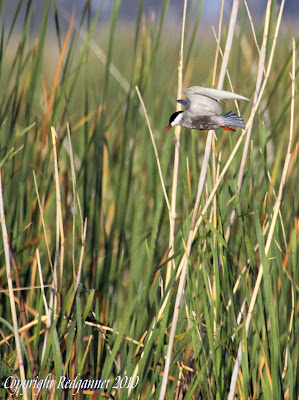 Among the White-wings was a Whiskered Tern.
A couple of local birders crossed the causeway and introduced themselves as Ernie and Rose Buric. They were full of information and bird lore. The birds, for example, had predicted the heavy rains which the weathermen had failed to forecast. This year, the weavers built their nests higher than usual and they have lost their fine breeding plumage early which is apparently a sign of a cold winter. Remember, you heard it here first! 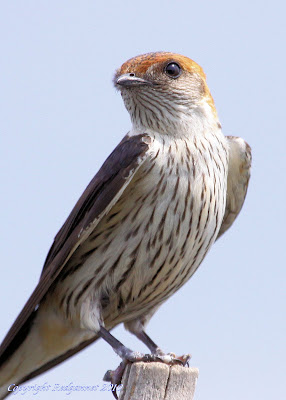 A last drop in to the duiker hide yielded a very accomodating Greater Striped Swallow. It sat for a picture then languidly took flight. 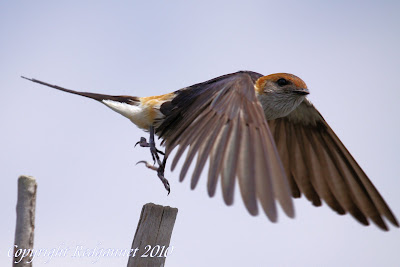 I popped out quickly on the first evening to case the joint at Northern Farm. 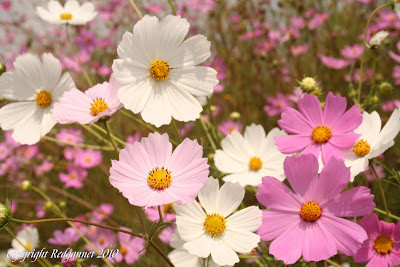 As a visit, I did not have the time to do it any justice and it does not warrant a separate post, but for the sake of completeness, I include a brief list. And a trip total of 132