In the same way that an episode of Sesame Street might be sponsored by a particular number or letter, the month of March at Redgannet has been brought to you by the avian genus “Toxostoma”.
The Californian Thrasher (Toxostoma redivivum) was added to my life list during a trip to LA earlier this month. This week, in Las Vegas, I was on the trail of the Le Conte’s (T. lecontei) and Crissal Thrasher (T. Crissale). 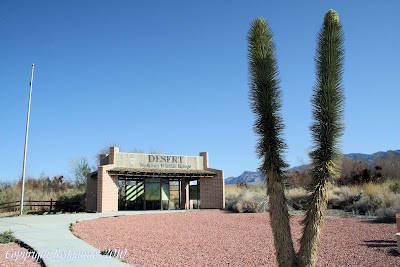 G.L. had introduced me to Je-Anne Branca (a double beer debt could be inferred from this), a birder’s birder and self-styled "feather chaser" (600birder08@cox.net), who picked me up at 06.30 from my hotel and drove me out to Corn Creek at the base of the Sheep Mountain Range.
We stopped en-route to check out some Eurasian Collared Doves and a Burrowing Owl. While we were surveying the doves, a darker bird flew into an open bush. With the binoculars, it was easy to see that it was a Yellow-headed Blackbird. The day had started well with breakfast and a lifer!
About 25 miles from the northern end of The Strip, we turned right (east) off Highway 95 on to a dirt road that led to Corn Creek. The thickest area of the scrub either side of the road is usually the best place to look for Le Conte’s Thrasher. Je-Anne was concerned that the cold north wind would deter them from their pursuit of singing from the top of the low bushes that make up the low-elevation Mojave Desert scrub. Their alternative behaviour is staying low and out of sight. We stopped a couple of times and scanned the top of the bushes. The birds teed-up here were Sage Sparrows, which made another great addition to the morning’s list. A large pale bird, way, way off looked very promising, but dropped down into the scrub before Je-Anne could get the scope on it. Despite the distance, I am confident enough to call a Le Conte’s Thrasher. This was the only one we saw and we concluded that they were staying low out of the biting, cold wind that made me wish I had brought gloves. 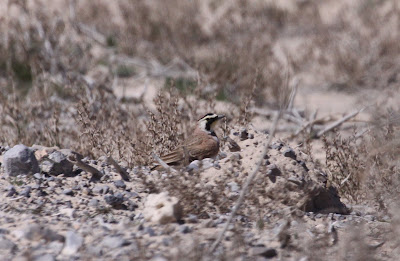 Horned Larks flushed from the verge as we continued on to the reserve. Corn Creek is a spring in the desert and attracts birds from all around. Some Lucy’s Warblers had just arrived; almost reaching their northern limit in Nevada.
The reserve has a couple of ponds, an orchard area and dry scrub beyond. Je-Anne, pointed out a Townsend’s Solitaire and a beautifully marked Audobon’s (Yellow-rumped) Warbler. In the orchard, 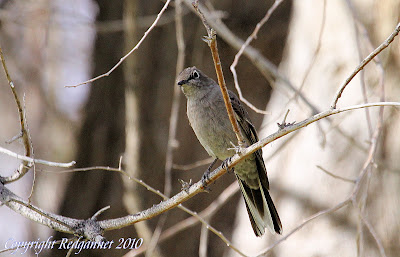 I tried to get some photographs of the solitaire and some Ruby-crowned Kinglets without much success. 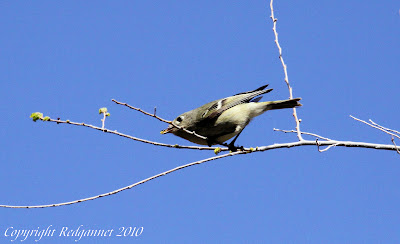 A female Vermillion Flycatcher was hawking from a low perch, but again my prowess with the camera was not up to the task. As we moved into the dry area beyond the orchard, a brown bird flashed across in front of us. I did not see it clearly but Je-Anne called Crissal Thrasher. I had quickly come to realise that she is a very experienced birder and one who knows her way around a mimid. So if she says it was a Crissal Thrasher, then it was a Crissal Thrasher. 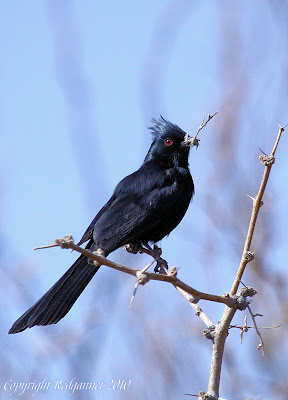 Phaenopeplas were common here and were building a nest in one of the many growths of mistletoe. A Road Runner called, but would not come out to be spotted. An accipiter flew over and by consensus we decided on a Cooper’s Hawk, however on the drive out, a much smaller version was probably the Sharp-shinned Hawk.

We moved on to the snow-capped Spring Mountains for the early part of the afternoon. 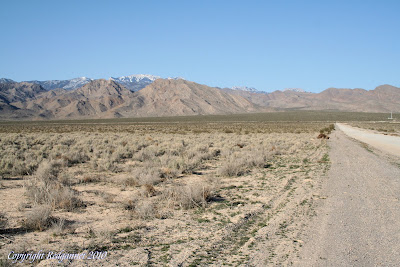 A flock of a dozen or so Band-tailed pigeon flew high across the road while Je-Anne regaled me with stories of Mountain Lions. Stopping occasionally we saw Western Bluebird and Pygmy Nuthatch. We approached the mountains through Lee Canyon and followed this road right to the top where the skiers park. Here Je-Anne promised me a Clark’s Nutcracker. As if on cue, one flew by without us even having to get out of the car. 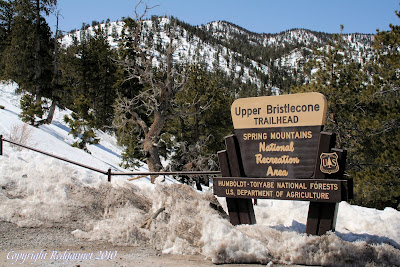 At the time I thought this to be a lifer, but on checking found that I had seen it before in Banff.

We turned onto Kyle Canyon Road. Western Scrub Jays that we saw here are likely to be split soon by the ABA (to become Interior Scrub-jays), so I will keep my red crayon handy for then. Near the top of the canyon we pulled into a small village to check out a feeder. Among the Dark-eyed Juncos was a Slate-coloured form. Steller’s Jays and some female Cassin’s Finch made up the party. 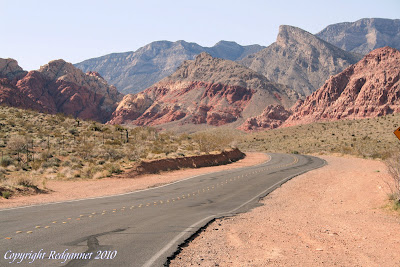 The canyon is aptly named for it’s very attractive colouration, but this also makes it a popular day trip for Las Vegans(?) getting away from the madness of the city. It was a beautiful Saturday afternoon, so the canyon was busy. The boardwalk here is one that I would love to return to on a quieter day. Even so we had a nice look at a 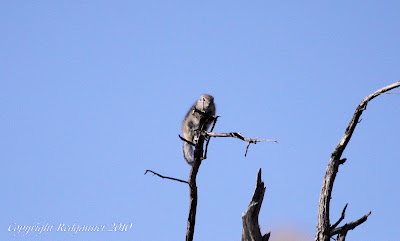 White-tailed Antelope Squirrel, some Audobon’s Warblers and a Pink-sided version of the Dark-eyed Junco.
At Blue Diamond, Je-Anne was after a very special bird. Without adequate provenence, the Black-throated Magpie Jay cannot be ticked although it would warrant the red crayon if it were seen 500 miles to the south and east. It is endemic to north-west Mexico. I know that the birding associations of each country are justifiably proud of their endemic species. 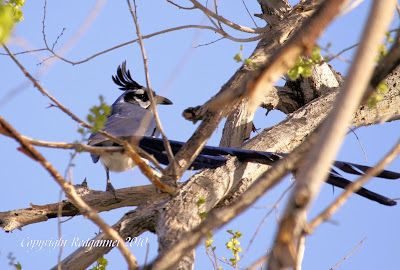 I wonder if they guard them jealously. The ABA considers a bird that has survived for 10 years in the wild as a naturalised species and therefore a legitimate part of the region’s avifauna. The magpie jay has been seen in Blue Diamond for 4 years now, It looks as if it is planning to stay and if it survives for 6 more years would jeopardise the endemic status of it’s species in Mexico. Perhaps it could soon become a target for the Mexican Birding Association’s assassination hit squad.
A small covey of Gambel’s Quail and a Coasta’s Hummingbird finished off the day.
I should like to extend a big thank you to Je-Anne for her generosity, expertise and good company during a great day out. 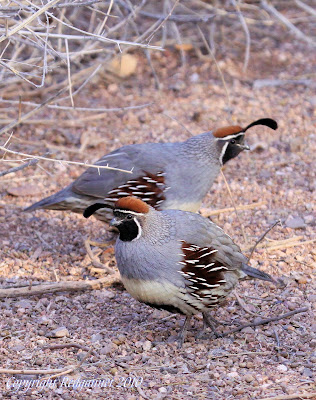 She had just fed the Gambel’s Quail and was getting ready to take a bird tour round the preserve.
It would have been possible to walk, but how can you turn down local experience such as Je-Anne’s especially when she takes you round in a bird mobile (in reality an 8-seater golf cart)? We were joined by local birders, Dave and Marilyn.
The preserve is a reclamation area for treated water from the adjacent works. The ponds were edged with scrub which provided vantage points for a Verdin and a Common Moorhen on the first pond. The ponds are labelled by number, but we took a geographical rather than numerical route, so do not set any store by the order of sightings. 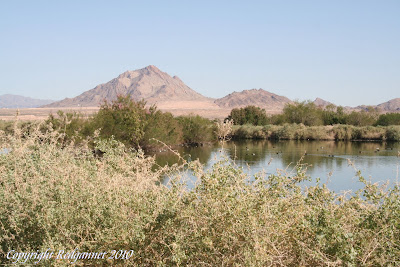 Some of the ponds had deep water and held diving ducks such as Lesser Scaup, Ruddy Duck and Ring-necked Duck. Eared Grebe were plentiful and even a few Double-crested Cormorants put in an appearance.
One of the ponds had tule beds and a couple of low islands. Marsh Wrens sang in the six-foot sedges and a Virginia Rail clucked but remained in cover. As we waited to see if the rail would put in an appearance, a snipe flew over. This was the Wilson's Snipe and credit goes to Je-Anne again for the ID. 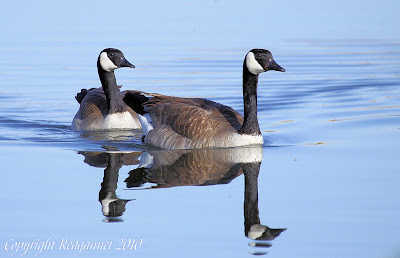 On the islands, some Canada Geese were preparing themselves for a fruitless season. Despite successful hatchings, the goslings never survive as there is no grass for them to feed on within waddling distance.
Beside them a small group of American Avocet females stood quietly. I learned how to tell them from the males, by checking the up-curve at the end of the bill. The females’ bills are more pronounced in their up-turns. Another thing I didn’t realise is that Ruddy Ducks can be parasitic, laying their eggs in the nests of Wood Duck among others. Redheads and even Mallards can also lay their eggs in the nests of others, I was shocked to hear.
There are plenty of Desert Cottontails and Dave spotted a Black-tailed Jack-rabbit. Coyotes have a den in the preserve, but are more commonly seen in the early morning. 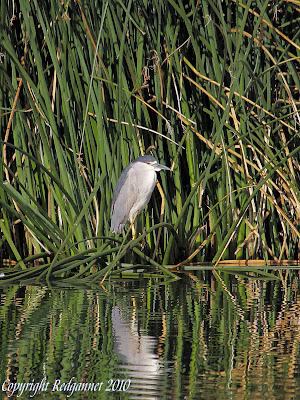 The tule beds were also home to a few Black-crowned Night Herons which, as Dave observed, scattered themselves widely rather than in a common roost.
Passerines included Yellow-rumped Warbler, Song Sparrow and as we pulled back to the visitor’s centre, an Ash-throated Flycatcher.
A full list of birds and details of the preserve can be found at www.cityofhenderson.com/parks/parks/bird_preserve.php