It is a pleasure to be able to blaze a trail for G.L. in return for all his suggestions in the past. He asked me to keep an eye out for yellow warblers in Central Park today ahead of his visit next week. 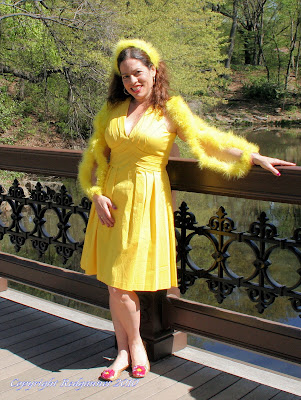 I found this one singing on the bridge over the north lobe of the boating lake. How am I doing so far G?
I had been looking forward to my rendezvous this week and my date looked fetching in the colours of the new season. But as regulars to the park will tell you, she can be fickle and today she was playing hard to get. The second week of April may have been slightly too early for the warblers, but some of the other migrants had already arrived. 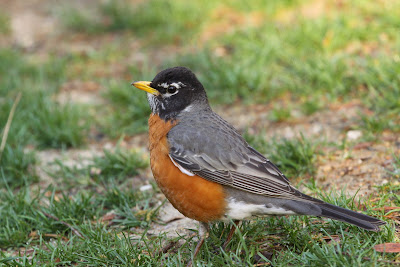 Most obvious was the American Robin which was abundant in the park this morning. Some were in the process of building nests; others were singing their short-versed song or fighting for territory. 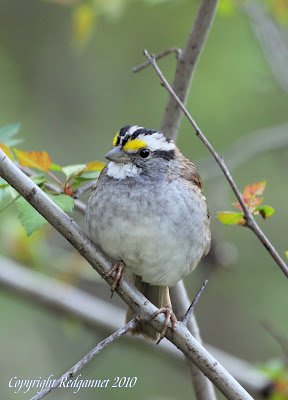 Also very obvious was the White-throated Sparrow. This species is a year-round resident of the park but numbers seemed much higher today. Perhaps the population is augmented by visitors, but probably the surround sound of ”..pibbidy, pibbidy, pibbidy” made them seem omnipresent. 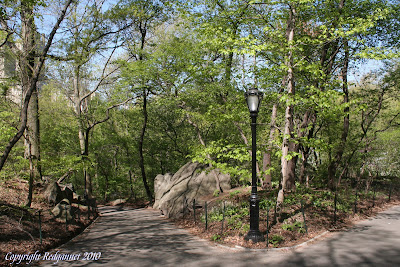 Apart from these, I saw very few birds before arriving at The Ramble. From the southern end of Bow Bridge, I thought I was going to be in for a woodpecker-fest. Drumming and calling from Downy and Red-bellied Woodpeckers accompanied me across the span, but seemed to melt away as I entered the woodland. 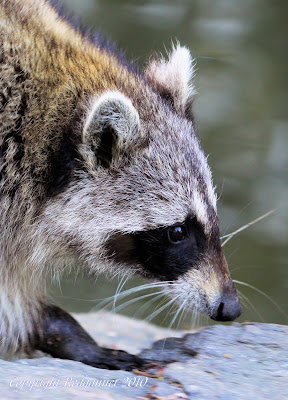 I arrived at The Oven just in time to see a Raccoon clocking off for the night and heading for his daybed.
In the café beside The Boathouse is a folder variously named “Nature Notes” or “Bird Sightings.” It is the bird log for the park and is kept in the café for all to see. The lack of birds was puzzling me. I was sure that I should have been seeing more than I had so wanted to check that I wasn’t missing out. The bird log confirmed what I had been noticing; that there were only a few species around so far this Spring.
Another absence had been preying on my mind. It was nearly 08.30 and I had not seen another bird-watcher yet. As I left the café and headed back into the park, I saw the first flock of birders. They had seen very little too. “It’s a tough day”, “quiet day”, “slow day” were the comments from them. 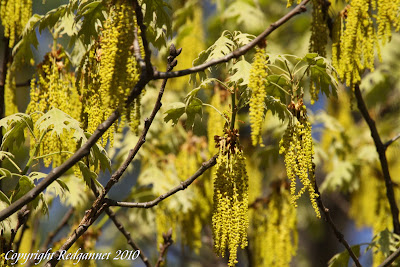 I stopped and talked with one for a short while and asked why so few birders were out on such a beautiful mid-April morning. His answer was because the birds liked to feed on the insects that were curled up in the catkins at the top of the trees. The catkins only start to open once the sun has had a chance to work it’s magic, so that is when the bird activity begins. Local birders who have got this timing sussed were able to stay snug and smug for an extra couple of hours in their beds while I watched the sky lighten behind the tall buildings. Will this new found knowledge keep me out of the park at dawn? Not a chance! She may be moody, but she is magnificent at any time of day. 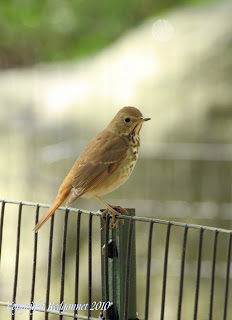 A hermit Thrush greeted me at the top of the slope.
A narrow spit of land pokes out into the boating lake from the north side. At last a few other birds were starting to show. 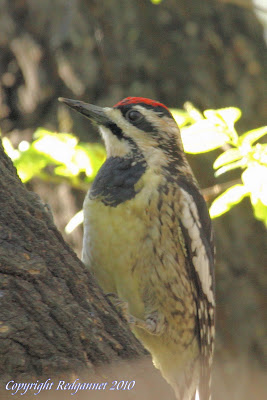 A Yellow-bellied Sapsucker, Northern Cardinal and some Blue Jays were seen down here.
Back in The Ramble, a Downy Woodpecker was excavating a hole. The downy often cuts more than one hole, so I cannot say for sure that this is to be her nest. A russet-brown bird turning the leaves proved to be a Brown Thrasher. 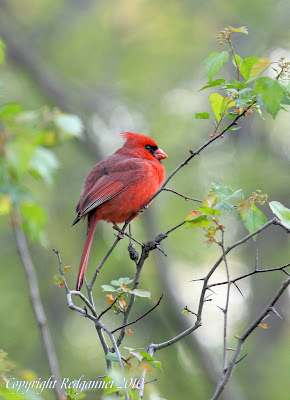 At Azalea pond, I stopped for a few minutes to try to get a decent photograph of a Northern Cardinal.
I was headed for Turtle pond which has often been a productive spot for warblers, especially the trees around the south-east end of the pond by the Poland bronze. 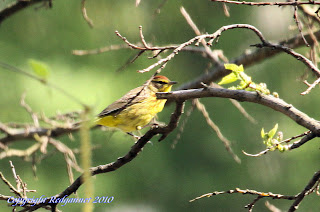 At last I found a Palm Warbler, shortly followed by a small group of Yellow-rumped Warblers. There were a few more birders in this area, but they seemed to be getting impatient, expecting to see more warblers than this. 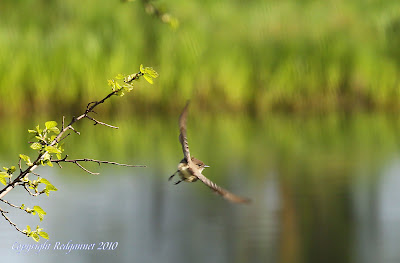 An Eastern Phoebe was hawking from the branches overhanging the pond as a Double-crested cormorant dried it’s wings on a bough at water level. 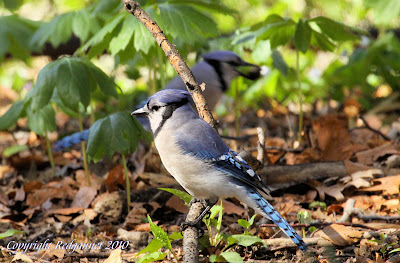 I spent some time along the south edge of Turtle Pond, watching the robins and jays flicking through the fallen leaves of the winter and singing amongst the new spring growth. 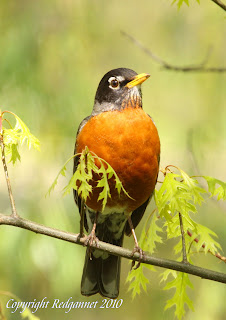 Taking a last pass through The Ramble, I found some Cedar Waxwings and a Pine Warbler before heading out to see how the Red-tailed Hawks were doing.
There is a famous hawk in New York called Pale Male. With his mate, Lola, he has nested and raised young on the façade of a building overlooking the model boat pond for some years now. 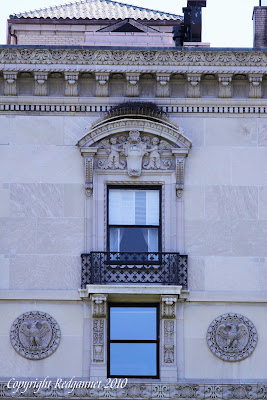 The pair has featured on national news and in the likes of People magazine, even in a previous Redgannet post. Books have been written and there are many websites devoted to them. A visit to the model boat lake at any time will reveal a Red-tailed Hawk fan, often a few at a time. The hawks are very closely scrutinised and at momentous events, such as fledging time, quite a crowd can gather. The female, Lola was sitting on eggs when I arrived, but today’s commentator told me that they were due to hatch at any moment. 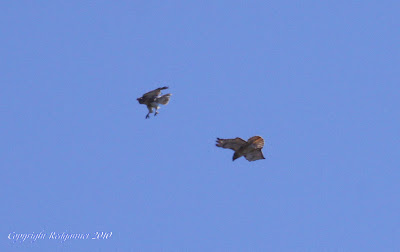 As we watched, a hawk came soaring out of the park towards the building, a second hawk swooped down at the first. I understand that the first one was Pale Male and that the second was an “outsider”. Pale Male saw him off and returned to his lookout in the park. A fine series of photographs of the hawk pair can be found at http://www.palemale.com/ A more diary style site is http://www.urbanhawks.blogs.com/ 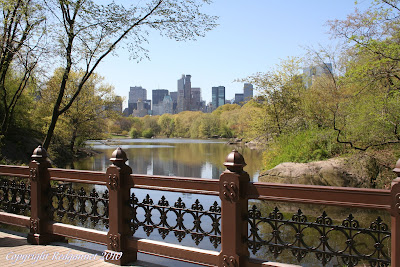 Visit the dedicated USA and Canada page for other posts from the region
Posted by Redgannet at 22:56