The mercury had passed 40C in New Delhi this week as the pressure builds in anticipation of the south-west monsoon. As soon as I stepped out from the taxi at Mehrauli Archaeological Park, I could hear the familiar hoot of the Coppersmith Barbet and further on, the resonant trill of the Brown-headed Barbet. 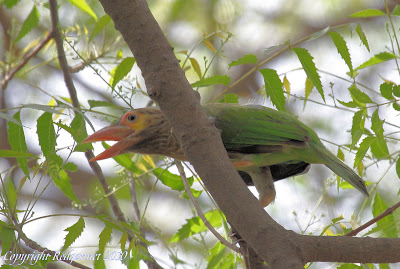 Since the day was already well advanced when we arrived in New Delhi, I needed to find somewhere close by, so I opted for the park that I had seen from the bus on the journey from the airport.
As ever in an Indian city, House Crows, Black Kites and Rose-ringed Parakeets were very obvious.
Also very common here were Jungle Babblers which glided between feeding opportunities, They were occasionally joined by Brahminy Starlings. 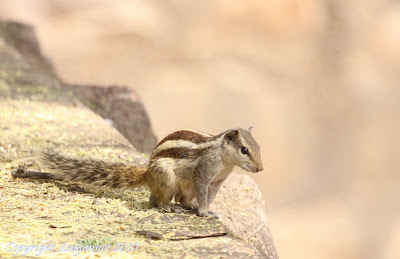 Indian Robins and 3-striped squirrels kept up a constant chattering soundtrack.
As one might infer from the name, Mehrauli Archaeological Park is blessed with architectural antiquities many of which have been restored. One might almost expect Baloo the bear and King Louis to come dancing round a corner at any moment.
There were no maps or signs that meant anything to me, so I just investigated bird calls and followed my nose.
Close to the Indian Nursery flower market, some Indian Peafowl flushed from a thicket and flew up on to the crenellations of the nearest ruin. 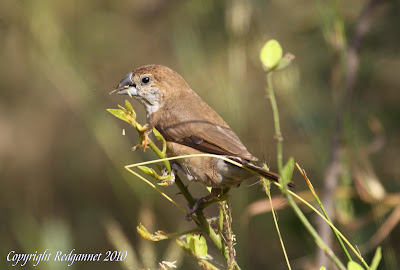 In an open area, Indian Silverbill (White-throated Munia) were feeding from seed heads.
Some Jungle Babblers and a Rufous Treepie flushed from the top of a crumbling gatehouse, while a Black Redstart picked insects from a small bush sprouting from the decaying brickwork.
Beyond the gatehouse, a set of steep, terraced steps took me up and on to a wide open area with a wonderful view of Qut’b Minar. 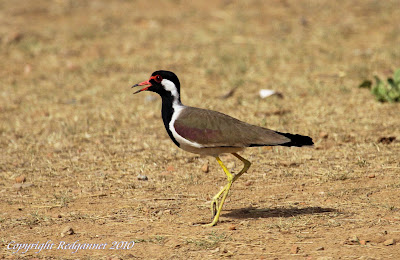 Red-wattled Lapwings were feeding in the sparse grass and Brown Rock Chats flitted among the fallen masonry.
Then it was time for the star of the show to make his entrance. I say “he”, but confess that I do not know if there is a way to differentiate between the sexes of Spotted Owlets. He flew into a tree close by. 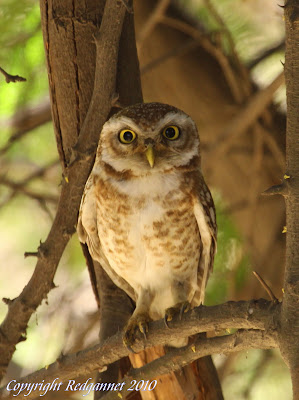 The tree was rooted further down a slope and I was on the top level of the terraces which afforded me a perfect eye-level view, the best seat in the house.
Like a seasoned performer the owlet proceeded to work through his repertoire of expressions. 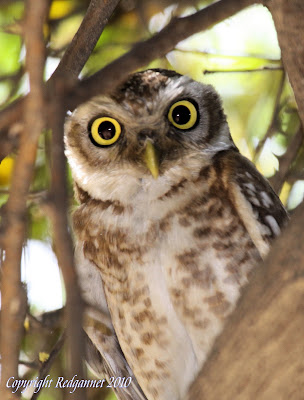 This one was “surprise”. 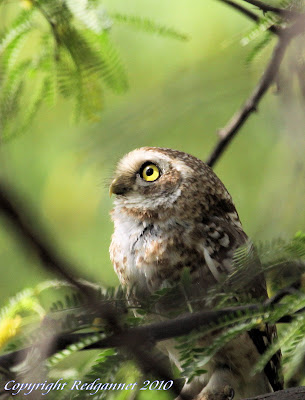 Here we have “angelic”. 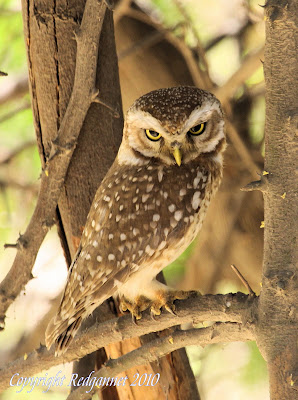 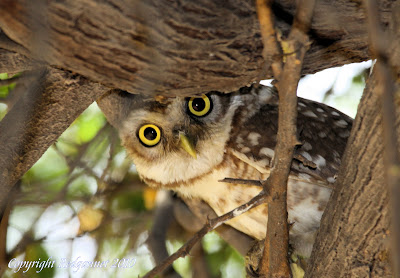 and “playful”.
Then a second owlet appeared in an adjacent tree and the performer left the stage. The show was over and they flew off together and left me to my applause.
I had nearly completed an eccentric circle when I came across a busy birdy spot close to the Jamali Kamali Tomb. 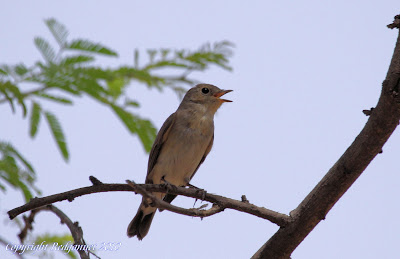 Black Redstarts, Purple Sunbirds, Jungle Babblers and a
Red-breasted Flycatcher (thank you to Rajneesh Suvarna) made an exciting after-show party.
The 72.5meter Qut’b Minar dominates the horizon in Mehrauli Archaeological Park, acting as a reference point and allowing one to wander aimlessly without getting lost (bear in mind however that it is a round tower and looks the same from every angle). 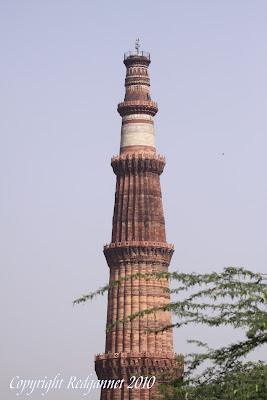 Sometimes going by the popular name pf Jamali Kamali (near Lado Serai), the park offers 100 acres of light woodland and ancient ruins within 5 minutes of New Delhi Sheraton Hotel. It is open from sunrise ‘til sunset and was quiet on this Easter Saturday morning. It did not appear to attract early morning walkers in the same way that other Indian city parks do.
It is a delightful place to visit for a walk or even a picnic if you do not want to watch the birds and squirrels and I would urge anyone to do so. Check the following links for a described tour of the park and it’s archaeological heritage. http://www.downtoearth.org.in/aagc/Mehrauli_archeological_park.pdf
Birders may find the last two paragraphs of the above piece interesting.
http://en.wikipedia.org/wiki/Mehrauli

For the sake of completeness, a few species were seen en-route and in the city which I did not encounter in the park. These were;