My target bird for this week was the California Thrasher, Two elements needed to be fulfilled to have any chance of finding one. First, go to California 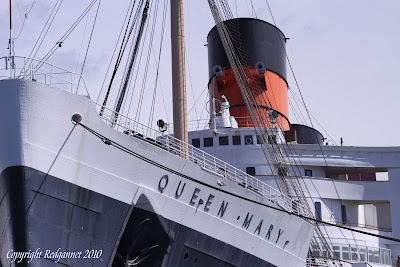 (Long Beach, Los Angeles was my scheduled trip for this week), secondly, find the right habitat i.e. chaparral. To this end, I found myself at Santiago Oaks Regional Park near Villa Park in Orange County, California (Google Earth 33 49 18N 117 46 31W). I received a very warm welcome from the lady who mans the gate from 07.00 ‘til sunset and takes the $5 fee per car. 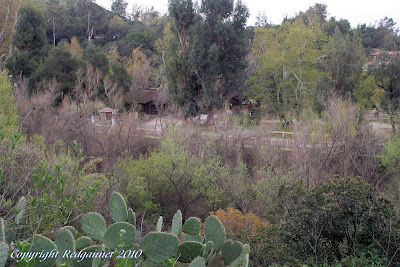 Birds were apparent as soon as I stepped out of the car. Some Western Scrub-jays and a Northern Mockingbird flew over, a California Towhee watched from a wall and a flock of parrots, possibly red-crowned, probably alien, called raucously. Rather gallingly, Red-crowned Parrot would be a red crayon bird in other circumstances. Another non-native, a Nutmeg Mannikin, flitted through the Historic Orange Grove.
A belt of trees and bushes run alongside the creek. 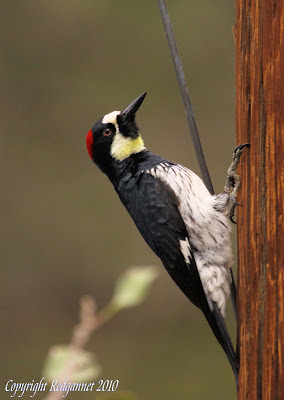 Here were Acorn Woodpeckers, Bushtits, Spotted Towhees and in the higher branches, Yellow-rumped Warblers. Two woodpeckers landed in a tree just ahead, stopped very briefly and flew off, but they stayed long enough for me to get a good look and identify them as Red-naped Sapsuckers. That made up for the parrots. A persistent drumming proved to be a Nuttall’s Woodpecker which is a handsome bird in the binoculars, but I was unable to do him justice with the camera.
The weathermen had predicted rain, but I have come to take their forecasts with a pinch of salt and had applied my customary factor 30. To spite me it seemed, the sky remained dark, but at least the rain was holding off for the moment.
A flock of birds caught my attention from the top of a leafless tree. It was a mixed flock of House Finches and Lesser Goldfinches. 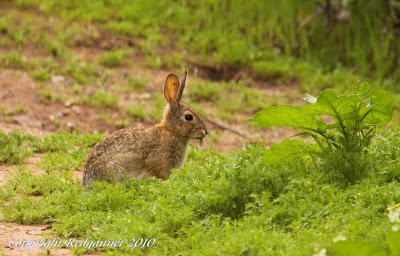 Below them a Cottontail Rabbit was feeding watchfully.
Beyond the riparian zone, trails led up onto the canyon’s slopes and a low scrubby habitat. To my inexperienced eye, this was the chaparral habitat that I hoped would harbour the California Thrasher. 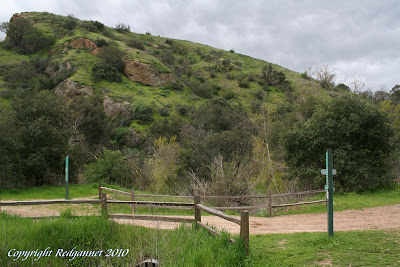 Chaparral is a heath-like community of plants characterised by low-growing drought-resistant plants such as Black Sage and California Buckwheat, with emergent individuals such as Yucca and Sugarbush. The actual constituents can vary with altitude and distance from the coast. The normally arid conditions in which it grows makes it prone to fire.
On meeting a group of flower-spotters however, it became clear that the area had suffered a fire a couple of years before and the growth I was looking at was made up of early colonising plants rather than the classical chaparral. 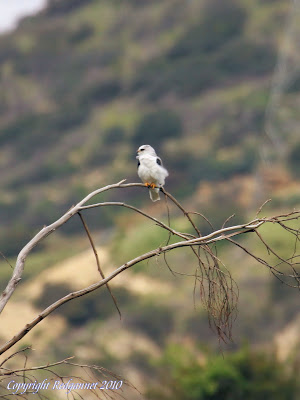 I continued for a short while in the pleasant company of a lady named Valerie, before deciding to move on. A White-tailed Kite gave us a fly-by as we made our way back down the canyon slopes.

Valerie kindly showed me the way to Tuckers Wildlife Reserve at the top of Modjeska Canyon (Google Earth 33 42 38N 117 37 09W). On the right side of the road, opposite the visitors centre, is a reserved parking area. 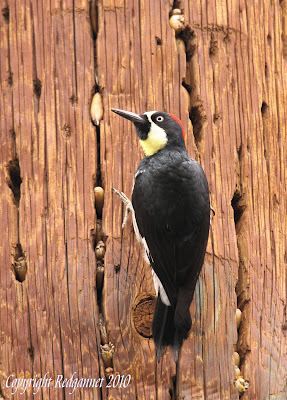 A family of Acorn Woodpeckers were maintaining their food store in a utility pole while Western Scrub-jays undermined them by stealing their acorns. 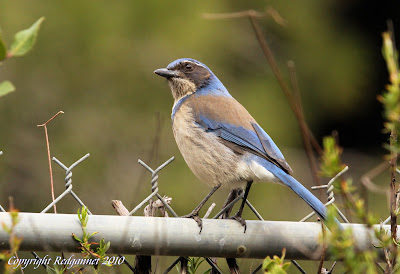 A fenced area contains a small circuit leading visitors through well-attended feeders with the added facility of a comfortable, rain-proof porch to watch from. 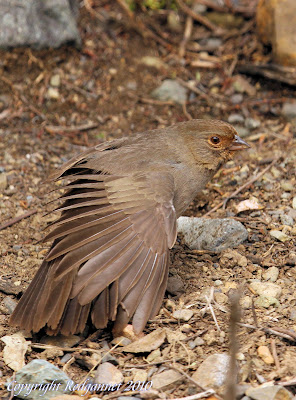 California Quail, White-crowned and Golden-crowned Sparrows, Spotted and California Towhees pecked for feed on the ground. A Northern Mockingbird watched from the top of a cactus. 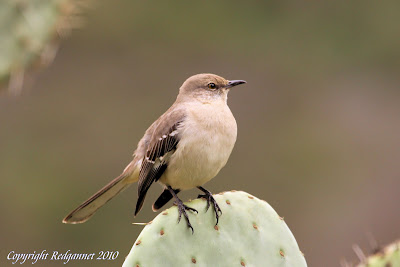 The day had turned brighter and Valerie heard a thrasher calling from the slopes across the road from the feeder garden. She pinpointed the area with some advice from the warden and we climbed the trail to see if we could find it.
Thrashers respond well to playback and it took only one try to get the result we were after. Valerie called my attention to a sugarbush (?) where a large, curve-billed bird sat in full view. 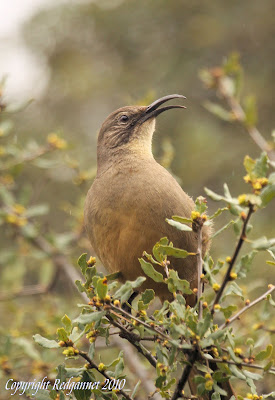 It was a California Thrasher. He sat well for a few photos and even gave his own regional variation of the song. At this point I would like to urge the responsible and conservative use of playback as the breeding season approaches. I am building up a large beer debt with the latest going to Valerie.
Back down in the garden I had a good look at a flock of Band-tailed Pigeons with their distinctive white hind-collar.
The very interesting visitors centre is run by Marcella who offered to let me in early for photographs in her pyjamas. I wonder if I heard her correctly?

The rain had held off and the sun had even come out for a while to make a very pleasant afternoon, but the clouds were gathering again as I closed the circle with a fly-past at Bolsa Chica (for a detailed tour of Bolsa Chica, I refer you to the post of January 2010). 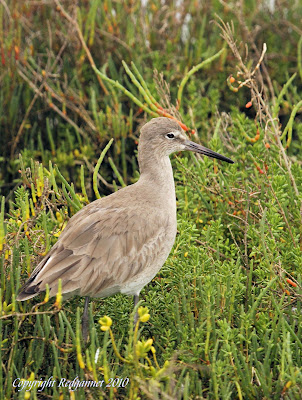 The wind was cold now and the rain was starting, but a quick trot along the boardwalk produced 20+ species. Snowy Plover, Royal Tern were species not seen on the previous visit and a very close look at a Surf Scoter made the discomfort worth while. 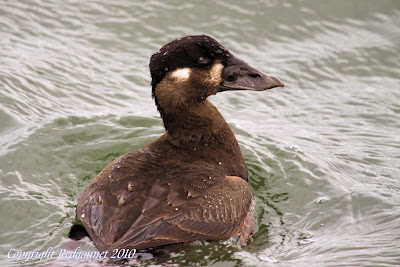 Without the car on the second day, I took a gentle stroll down to the harbour at Long Beach ostensively to do a bit of gull-watching. 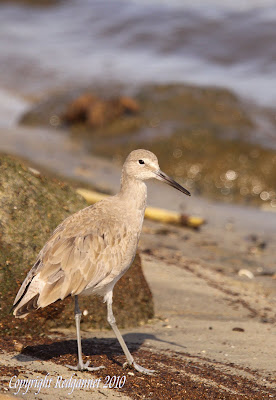 A Willet and a Marbled Godwit showed very well on a tiny patch of sand left by the retreating tide. 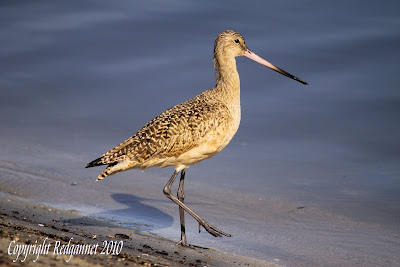 I had never noticed an Eared Grebe’s pre-dive routine before today. The usual appearance of this species on the surface is like a fluffy ball. 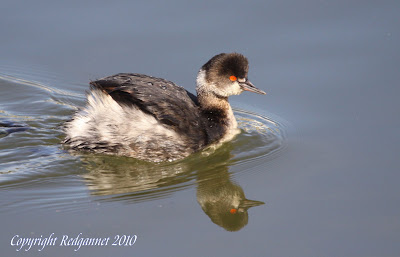 Just before it dives, it contracts it’s feathers, expelling all the air and dramatically reducing in size and buoyancy. Then it is ready to submerge which it does with an elegant dive. 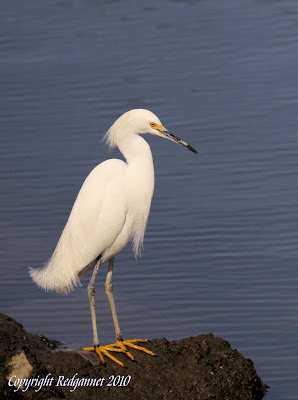 A Snowy Egret allowed me to approach closely and this time I remembered to underexpose by a couple of thirds to prevent his whiteness burning out the detail. 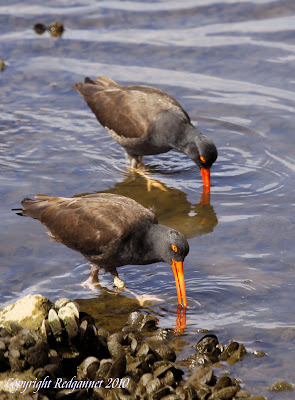 A pair of Black Oystercatchers were working a mussel bed by the Aqualink ferry at Dock 4. It struck me that a boat ride might be a nice idea. At $5 for a 20 minute trip to Alamitos Bay Landing, it seemed good value, so much so that I came back again. As an added treat we made a stop beside the Queen Mary at her permanent mooring.
Birds on the water within the ocean wall included Western Grebe, Double-crested and Brandt’s Cormorants 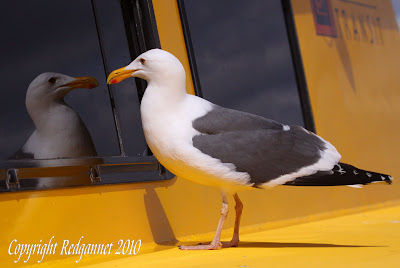 and a Western Gull that took exception to it’s own reflection in the cockpit window.
Surf Scoters were especially common within the docks at Belmont Shore. They gave great picture opportunities when they took to the air as the boat approached. 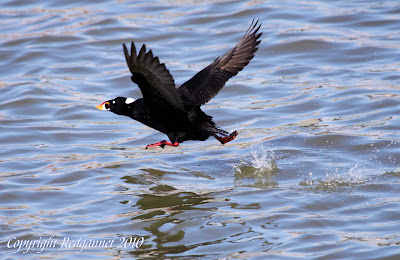 Today was my highest ever Peregrine Falcon count. The first was seen flying straight at me from my hotel window. The second, from the boat and the third was circling the top of the Wells Fargo building at the corner of Pine Street. With such close proximity, the chances are that it was the same bird or part of a pair, but each was separated by enough time, distance and direction to count separately.