Sanjay Ghandi National Park is the obvious choice for a quick and easy bird-watching trip in Mumbai (Bombay). The entrance is near Borivali, about 25 - 30 minutes by cab from the international airport. 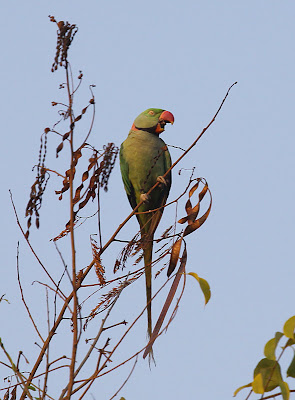 The area around the entrance gate is usually busy at any time of day. At 06.30 on a Saturday morning it was thronged with people taking early morning constitutional walks. There are areas for contemplation and relaxing beyond the entrance area and a lake. If you are looking for peace and quiet as a condition for your patronage of the park, you need to move immediately beyond this area. Keep to the right and you will find yourself on the road towards Kanheri Caves. Nearly 1km after passing through the entrance gate, just beyond the rail tracks, you will pass a small settlement. 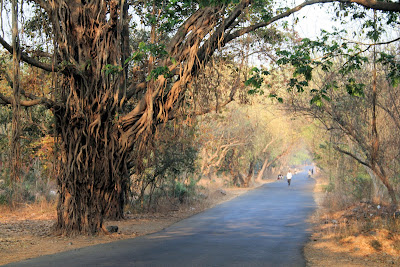 Beyond here the people tend to thin out and it becomes possible to focus on the birds.
I spent a little time around the entrance area this morning. I had never heard so many Asian Koels before. In one tree there were 5 birds calling hysterically with others in neighbouring trees adding to the noise. House Crows and Rose-ringed Parakeets screeched their welcome to the day. Only the Oriental Magpie Robin and the Coppersmith Barbets were able to inject a little tone and timbre to the early morning chorus. 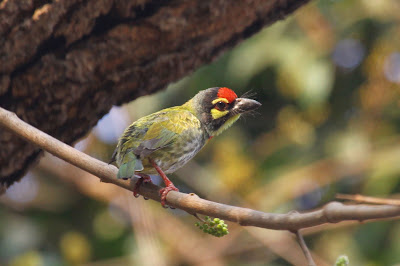 The camera and tripod provoked too much attention and curiosity, so I struck out towards the remoter regions of the park. Just beyond the aforementioned small village, there is a path leading off the road to the left. This was much quieter and I was able to start birding at last. A fruiting tree was attracting Coppersmith Barbets, so I set up my tackle for a picture. 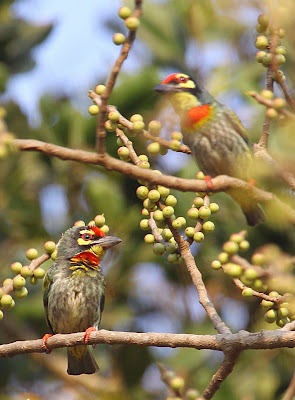 A long-billed Acrocephalus warbler in an adjacent tree may have been a Blythe’s Leaf Warbler and some Asian Palm Swifts called from a clear, blue sky. Eurasian Orioles were common along the path as were Oriental Magpie Robins and Chestnut-tailed Starlings. Bulbuls put in a good appearance too with Red-whiskered, Red-vented and most notably the seldom seen (by me) White-browed Bulbul. 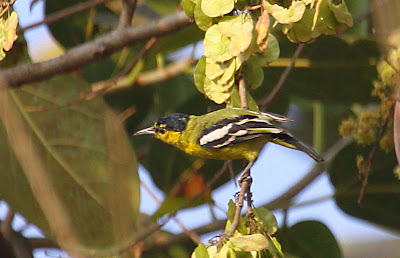 An iora made me reach for my field guide. Mumbai is within reach of the distribution area for Marshall’s Iora, but lack of any white in the tail made me plump for Common Iora. A better look at the earlier warbler enabled me to confirm Blyth's Reed Warbler. It seemed an odd habitat for an Acrocephalus, but Grimmett and the Inskipps (Birds of India, Princeton) give it as the only one that is commonly found beyond moist environments.
I had not seen another person for 30 minutes now and I was beginning to enjoy the sense of isolation. The habitat was dry and scrubby with palms and tangles. It was almost reminiscent of African acacia scrub without the thorns. This feeling was enhanced by the roar of a lion in the distance. In fact, the path runs nearly parallel with the road and only about 200m from it and the roar came from a captive cat in the safari exhibit. 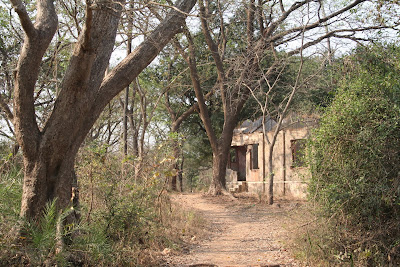 Soon enough I came upon a couple of deserted forest bungalows by a dry riverbed. This must have been an idyllic spot once upon a time, but decay and neglect had prevailed. It proved to be the hot-spot of the day. There were a few large, leafy trees in contrast to the rest of the park which was scrubby and leafless as the heat builds towards the monsoon.
An Orange-crowned Leafbird was seen briefly, but well enough, in the greener trees with orioles and a Black Drongo. On the ground and in the lower vegetation were some pipits which I was not able to identify and a Tickell’s Flycatcher which I was. A Crested Serpent-eagle flew over, mobbed by crows. The House Crow was giving a little ground to the Jungle Crow now that we were further into the forest. 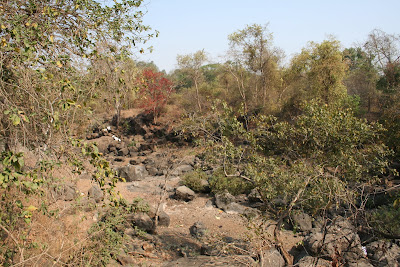 In such a picturesque setting, I stopped for a while on some rocks overlooking the dry riverbed. Cotton-wool-like fibres from the Kapok trees were caught in drifts among the boulders. I was visited by something that looked like a Chiff Chaff (but what doesn’t?) and then a Pale-billed Flower-pecker that made me spill my water bottle in the excitement. Green Bee-eaters hawked from a snag above me as I contemplated returning to the hotel for a sleep.
Before I could make a decision, 2 men on motorbikes arrived and suggested a good place for bird-watching further on. Ganesh and Sanju work in the National Park as movie shooting location co-ordinators (the park is a popular Bollywood backdrop) and gave me a lift to the Nature Trail (cross the bridge, turn left and continue for 200m towards the safari enclosures)
It was 11.30 by now, over 24 hours since I last slept and it was hot. With the best will in the world, I was only able to give the trail the most cursory of glances, but I did see a beautiful Chital (Spotted Deer) stag. It looked like a very promising area and I will try to start from here on my next visit.

Walking back towards the entrance, I noticed a flock of Jungle Babblers. These approachable birds are often referred to as "the seven sisters", and this flock contained, yes you've guessed it, three. 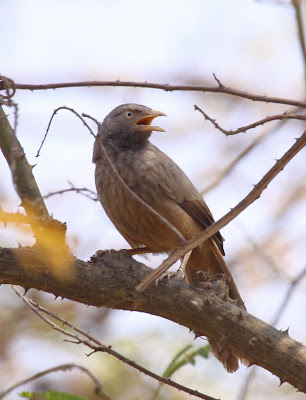 There is a lot of contradiction and confusion about the park and it’s policies. In my experience today I can state that the park is open to pedestrians before 06.30, but large gates prevent any vehicle access. I am told that taxis and private vehicles are not allowed in the park, yet I saw quite a few. To reach Kanheri caves from the entrance is about 10 – 12 kms. A bus runs there, but I did not see an official bus stop nor any schedules (nor any buses now that I think about it). Walking towards the caves is towards the rising sun. Try if possible to get as far into the park as possible and then return slowly towards the entrance with the sun behind you. Depending upon your outlook, you may be lucky enough to find evidence of leopards that frequent the park.
There are no facilities beyond the entrance. Toilets are just inside the gates and street stalls sell water just outside. Taxis are easy to hire from the gates for the return. The fare should cost around IR150 for a black and yellow. People are plentiful and cheerful. On the road, I would venture that the park is safe enough. I did not feel threatened at any point, but there are isolated places off the road where your own judgement should be the best guide.