The approach to Broad Channel train station crosses a bridge with views across the water on either side. On both sides, large numbers of Bufflehead could be seen with the white of the drakes standing out against the dark water. To the left, an inaccessible shore held my principal quarry for today, the Snow Goose, along with Brant and American Black Duck. To the right, East Pond was visible with a couple of Mute Swans, Mallard and more American Black Duck.
There is only one exit from Broad Channel station. Walk straight ahead and turn right at the junction with the main road. 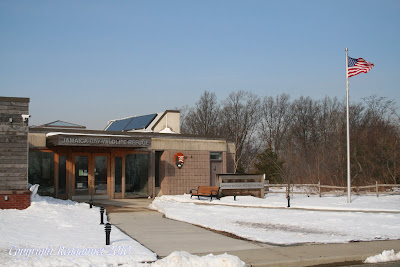 The Visitor Centre at Jamaica Bay Wildlife Refuge is just 10 minutes walk. There are facilities and interpretative displays there, but no food.
New York has been suffering heavy snowfall over the past few weeks and I must have been very lucky to find a patch of blue sky which grew into a sparkling morning. The Americans put us Brits to shame when they have to cope with snow. All the roads were open despite having had more than 3 feet of snow within the last 2 weeks and the sidewalks were clear despite no-one ever using them.
The tide was early this morning and was already ebbing strongly by the time I arrived at 08.30. A Brant Goose had hauled-up and was roosting on a bed of washed up reed stems. 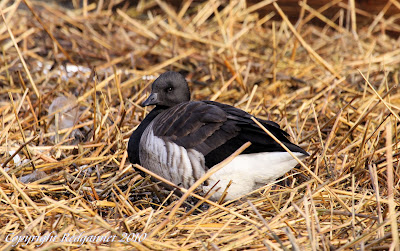 This one was very approachable unlike nearly all the other birds which seemed wary today. On the water, in the distance a Hooded Merganser flashed his white crest.
I entered the refuge through the Visitors Centre and consulted the sightings book outside. This was a roll-call of the usual suspects with nothing out of the ordinary to get the pulse racing. 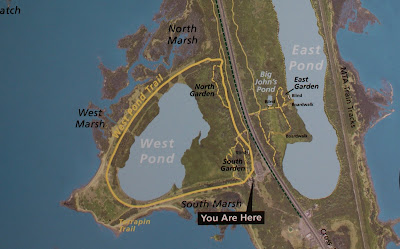 I continued around West Pond and travelled in a clock-wise direction today to keep the sun behind me to begin with.
Just inside a small group of sparrows proved to be the White-throated Sparrow. 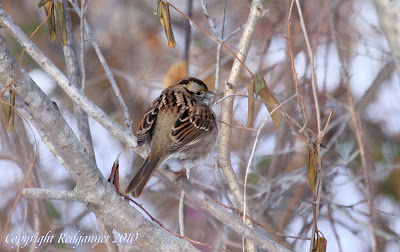 A Northern Cardinal kept up an incessant calling from nearby. Overhead a Cooper’s Hawk was flapping and gliding, heading south.
On the Jamaica Bay side of the path, the tide was receding leaving exposed mud and marsh. Hundreds of Brant and Canada Geese were feeding here with an occasional Herring Gull. There was no sign at all of any wading birds.
On the inside of the path is West Pond. Mallards and American Black Duck were joined by Northern Shoveler and a few Green-winged Teal. Needing closer inspection was a single female Common Goldeneye. On the far side a good sized flock of Ruddy Duck was interspersed with a few Greater Scaup. 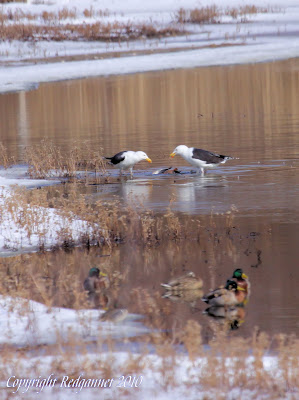 Two Greater Black-backed Gulls were feeding from a carcass that I suspect may once have been a Northern Shoveler, while in the foreground a Great Blue Heron was having some success fishing.
It had turned into a glorious morning and I should have been getting some wonderful pictures, but I was not finding the birds at close enough range. Only when I had walked nearly three-quarters of the way round did I finally get a subject that I could fill the frame with. A Northern Mockingbird was skulking about in a small patch of bushes. 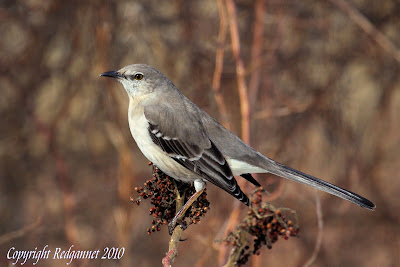 I suspected that it might come out to feed on the fruiting stalks nearby and was rewarded for my patience with this picture.
Out on North Marsh numbers of Herring Gull and Brant were picking among the bivalves revealed by the ebbing tide. Beyond them on the open water of the bay, Red-breasted Mergansers were fishing.
The last part of the walk took me through a wooded area which was very quiet except for the whinnying call of a Downy Woodpecker.
I had been disappointed not to find any Snow Geese at the refuge and wanted to cross over to East Pond, but the weather looked as if it was about to close in again so I left it for next time.
My return flight was late in the evening on this occasion and the extra couple of hours gives a good opportunity to explore the area. I would not contemplate it if the return flight was earlier in the day. I usually leave about an hour and a half for the journey in each direction from Manhattan. The V train passes through the station at 53rd and Lexington. Take this downtown to 4th St. and change to the A train towards Far Rockaway. 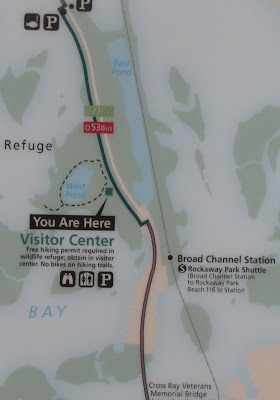 The station closest to the Jamaica Bay Wildlife Refuge is Broad Channel, just beyond the connecting station for JFK airport.
The sky had turned leaden and heavy as I boarded the train back to the city. On the right as we pulled out of the station were the Snow Geese again, this time in their hundreds. At a rough guess, there were 2000 beautiful white geese on an inaccessible shoreline, but I had not seen a single one in the reserve just half a mile as the goose flies.

Visit the dedicated page for USA and Canada for other posts from the region
Posted by Redgannet at 22:25