An otherwise quiet day was lifted by meeting up with my reader at Montlake Fill, aka Union Bay Natural Area.

I had mis-timed my arrival and had to wait for the light. When the dawn broke, I set out down the path along the Montlake Cut. Silhouetted against a lightening sky were Double Crested Cormorants and a tree-ful of crows. You will note that I am avoiding being specific about the crows. See the previous Seattle post for details and information about Montlake Fill and how to get there.

The weak early light reflected on the water of Union Bay, showing a large raft of ducks huddled tightly together, but they were too far out to be discernable yet. The white tail of one of the resident Bald Eagles was just visible in the gloom. Closer in among the small islands near the sailing club, I was able to make out the details of a couple of Wood Duck, Some Gadwall and Mallard. The white markings of a male Hooded Merganser and a small group of Bufflehead were more obvious. Two Beavers were making their way between the islands. Their eyes and nostrils situated at the top of their heads allowed them to maintain a very low profile in the water. One of the adult Eagles appeared suddenly and landed in a tree closeby. 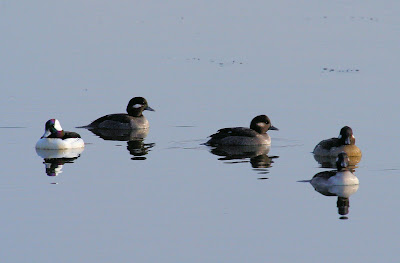 Beyond the rowing club, I stopped for a while to watch the Bufflehead and to try to identify a hawk way off. I suspect Coopers, but could not be sure. 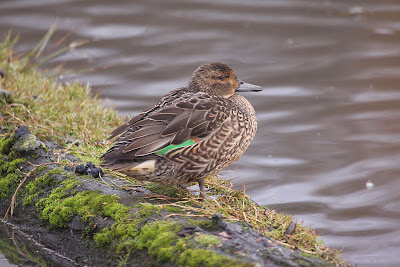 At last the light became strong enough to make photography worthwhile and I started with a female Green-winged Teal. Beyond her in the narrow channel that lead out to the main water, 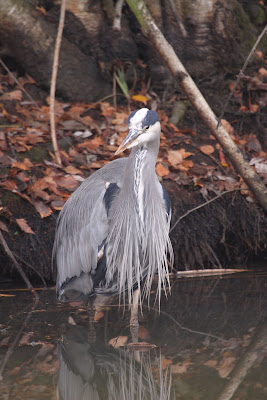 a Great Blue Heron stood motionless waiting for his breakfast to approach within reach. A footbrdge took me across the channel into the carpark of the Union Bay Nature Reserve. 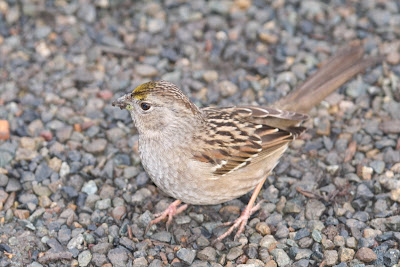 At the first junction of the path a flock of 5 Golden-crowned Sparrows were digging through the gravel.
The light was improving now so I was heading towards the shore of Union Bay to get a better look a that large raft of duck. I was sidetracked by the overgrown pond which has produced otter and other excitements in the past. It was here that I met Amy, my reader. It was a pleasure to meet her again and we took a turn around the reserve together before she had to head off to work. We saw an Anna's Hummingbird, which surprised me at this time of year. I know that some people, in Vancouver for example, leave sugar-feeders out all year. Would the hummingbirds be able to over-winter otherwise I wonder?

At the lake I was able to get a better look at the large flock which proved to be mostly made up of coot and Wigeon. Closer inspection revealed a few Lesser Scaup and at least one Canvasback. 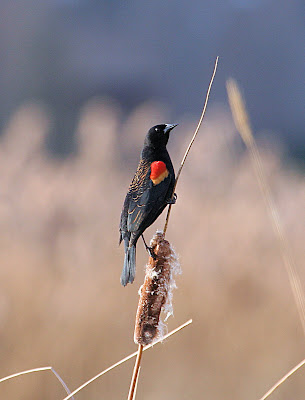 The red-winged Blackbirds were singing from vantage points in the trees, bushes and reeds. You would think it was spring the way they were carrying on. A Lincoln's Sparrow briefly showed, low down in a tangle.

Passing back past the overgrown pond produced a Belted Kingfisher, but not the Wilson's Snipe that Amy had mentioned earlier. Sibley does not mention Wilson's Snipe, nor does Peterson. National Geographic mentions it in passing as the former name for Common Snipe. It is a popular inclusion in posts on http://www.bcvanbirds.com/ however and my colleague G.L. has spoken of it. I would not know how to differentiate it from a Common Snipe, but since I saw neither, it did not present me with a problem.
Since writing the above, I have checked through my assorted information sources and have prepared a Wilson's Snipe ID pack in case I ever face the challenge of the subtle differences between the two.
I have found that the Wilson's Snipe Gallinago delicata is also known as a Fantail Snipe. It was previously conspecific with the Common Snipe and in many accounts, is still considered thus.
It can be differentiated from G. gallinago by conspicuous white trailing edges to the wings.
It is distributed from the Aleutian Islands and Alaska to the southern USA. It winters to the northern part of South America.
As I trekked my way back past the rowing club, a disturbance in the water caught my attention. A River Otter was hunting around and under the floating docks while a Pied-billed Grebe watched on. While I say "hunting", otters manage to make even the essential chores of life look fun. Perhaps she was just playing. 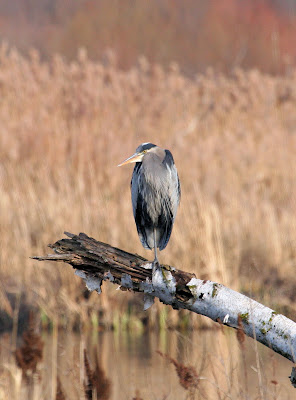 A heron sitting out on a birch snag with the browns of the season in the background made my favourite picture of the day.
I was just preparing to put the camera away after this shot when an immature Bald Eagle flew over with something in it's talons. It settled in a tree above the sailing club and fed on it. Dark feathers fell from the prey showing that the young bird was quickly taking a lead from it's parents who are said to feed exclusively on the waterbirds of the bay. I noticed on the few occasion that I saw eagles today, that they get harassed far more than the eagles of Boundary Bay, Vancouver (see post 20th December). Perhaps the birds at Boundary Bay see so many eagles that they can't afford the time to mob them all. At Union Bay the eagles are fewer and further between, allowing the smaller birds a rest and a chance to feed before having to chase off the next predator. The young eagle was not allowed to settle even though it was pre-occupied with it's lunch and probably not an immediate threat. 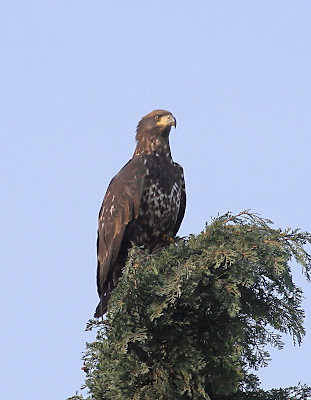 It was harried from the sailing club to the top of a conifer on the lawns outside the stadium dropping it's lunch as it left. From there it flew back out over the water and was gone.
Mammal species;
Beaver 2, River Otter 1.
Bird species; 34