I would like to acknowledge JR from Dallas (yes, really!) for his website www.jrcompton.com in which he gives an account of the goings on at White Rock Lake. Dallas, Texas. His “Amateur Birder’s Journal” gave me the impetus I needed for a very quick visit on a very cold day. 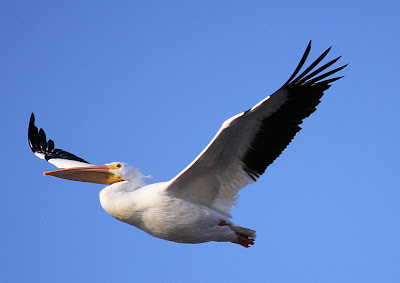 JR’s main topic of discussion of late on his site, is his fascination with pelicans in flight. So in tribute, I set out to follow his lead. As ever, my photographs failed to live up to my aspirations, which, given the bright, crisp light this morning, was a disappointment. I’m beginning to think it might be me!
The hotel I was staying in is the Marriot Quorum in Adisson. From behind the hotel, bus no. 183 rides into downtown and terminates at West Exchange in downtown Dallas. The tram/subway system connects here at West End Station. I travelled northeast on the Blue Line towards Downtown Garland. I alighted at White Rock and descended the steps to the junction of Northwest and Lawther. The journey took 1 hour exactly. A US$4 day ticket covers bus and train.
Diagonally across the junction, I picked up a cycle path that tracked south parallel to Lawther. It passed through an area marked as a wetland before passing under Mockingbird Lane. As I emerged from under the bridge, I could see White Rock Lake ahead of me.
There were lots of cormorants and gulls over-flying and a formation of seven American Pelicans crossed Mockingbird Lane heading North.
I had come to the lake at Bent Bridge in the northwest corner.

A wintry scene greeted me as I approached the shore. The large trees at the waters edge were frosted white in keeping with the season and the chill. Actually, the cold muted the smell of cormorant guano that was the real reason for the effect. I will wager that it gets pretty high during the warmer weather. It was here that the light gained enough strength to allow me to start identifying birds. Carolina Chickadees were calling and Yellow-rumped Warblers flitted amongst the tangles. 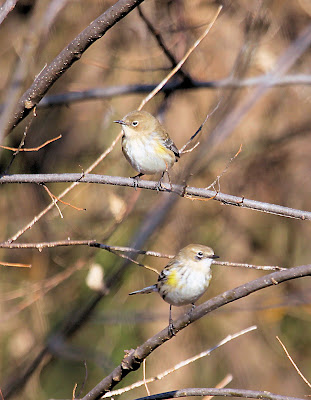 A Red-shouldered Hawk flew out from the woods on my left and joined a second in the cormorant roosts. The Pelicans were far out, but easily recognisable and accompanied by gulls and Double-crested Cormorants.
I began walking to my left in a clockwise direction. My time as ever was limited and a full circuit of the lake would not be feasible. My plan was to head towards Sunset Bay beyond Hidden Creek as my furthest point before returning back the way I had come. Anyone who has read this blog before knows that my estimation of time and relative dimensions in space is poor. Sure enough, I hardly made it as far as half of that distance, barely even 10% of the lake’s shoreline.
I had a couple of targets in mind this morning. Potentially a couple of red crayon birds were waiting for me in the cold. From the gulls, I hoped to winkle out a Boneparte’s Gull and from the sparrows, I hoped that a Harris’s would emerge.
Between Bent Bridge and Singing Bridge I scanned every Ring-billed Gull looking for a smaller, tern-like bird with a vestigial black smudge on it’s head from it’s summer plumage. The Song Sparrows were plentiful, but I was looking for something larger with a clear white belly and a pink bill.
To the north of Singing Bridge a patch of water huddled out of the wind, sheltered by trees and the Mockingbird Lane flyover. 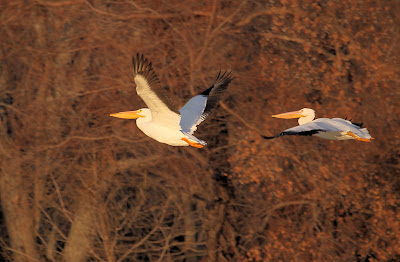 I had my first chance to try to emulate JR’s pictures as a number of pelicans took flight and passed back over the bridge onto the main body of the lake. There were also cormorants, Mallards, American Coots, Pied-billed Grebes and some Muscovy Ducks (probably feral). Up on the bridge, the wind was beginning to bite through my gloves and my fingers were already becoming painful.
There was some bankside vegetation along some stretches of the lakeside, which on a warmer day might have had me looking for dragonflies. 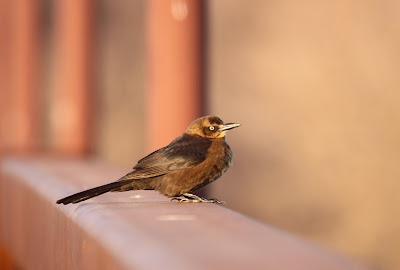 Grackles are common here with both Common and Great-tailed in constant view. Red-shouldered Blackbirds and Brown Cowbirds complimented my Icterid list. 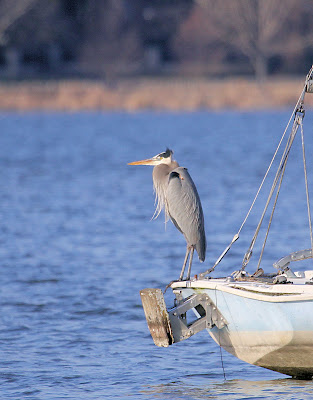 Out on the water the birds roosted on boats and piers. I saw a small tern-like bird which turned out to be a tern. 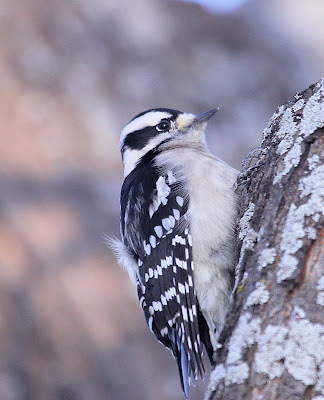 Beyond the boat clubs, a Downy Woodpecker landed in a tree right in front of me and posed provocatively. This meant having to take my hands out of my pockets to use the camera. It was becoming windier and beyond uncomfortable. 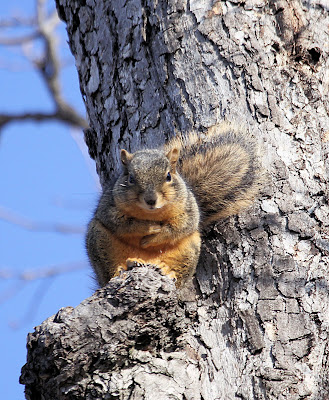 A Fox Squirrel kept his arms in to his sides to preserve heat as he tried to warm up in the sun.
The pelicans were on the far side of the lake split into two groups. The furthest group was bigger but much more distant. The nearest consisted of around 45 birds. They were accompanied in the water by cormorants with gulls wheeling above. As I watched, they appeared to be heading towards me. Slowly but surely, they were moving eastwards across the water. The pelicans at the back would take to the air and reach across the wind to get to the front of the feeding flock. Thereby the front birds eventually found themselves at the back and took flight to get to the front again. It reminded me of pursuit cycling teams in reverse. 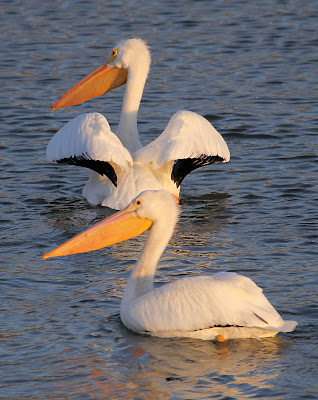 Standing still for a while had been a mistake. The cold and the wind had cut into me and I found myself constantly swearing and getting very cross with my useless fingers. It was time to bail out and head home. But that meant heading into wind which only served to make it worse. I was actually feeling quite distressed now. 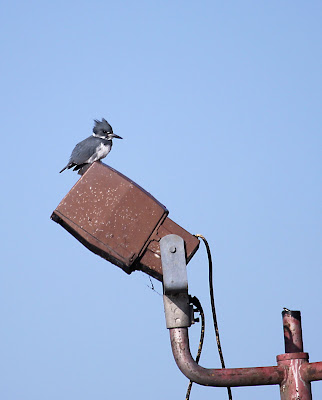 Perhaps my resistance is getting lower as I get older. The savoury sharpness of a lifer was now tempered with the desire to feel my fingers again and my determination had faltered.
Back at Singing bridge, a low wall gave a respite from the wind and allowed me a few moments to warm in the weak sun. Some life had returned to my fingers, but I couldn’t stop swearing. I still had to cross the windswept bridge.
A patch of woodland beyond the bridge was alive with birds; White-winged Doves, Yellow-rumped warblers, Carolina Wrens, Carolina Chickadees, Song Sparrows and to my delight Eastern Bluebirds. 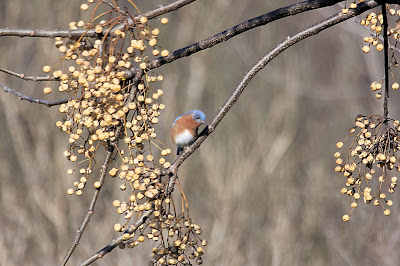 I managed to get a picture of the bluebirds for my blogger-floggers who insist on “more pictures!”
At Bent Bridge the tangles and rank vegetation either side of it were busy too. At last I found a Mockingbird and a Northern Cardinal, both of which would have been a grave omission. I had seen very few duck today although I had been assured that they were there.
Just before reaching the junction of Lawther and Northwest I noticed high above, a Red-tailed Hawk being mobbed by American Crows.
On the return train journey, I headed towards Ledbetter to get into town. The frequency of bus and train is less during the day and the drive back to the hotel for pick-up took just over one and a half hours.
Our bus ride back to the airport produced as many as 20 redtails, perched on roadside snags and lamp posts.