The Bolsa Chica Ecological Reserve is about miles 25 down the coast from Los Angeles. The bus schedules do not lend themselves to this particular journey. 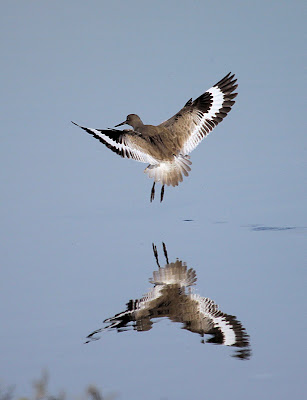 Do NOT try this on a Sunday! I did, but I am a trained professional.
Bolsa Chica is a quite extensive wetland and saltmarsh. Access is easy once you get there. It is immediately inland of the Pacific Coast Highway at Sunset Beach, Orange County.
I arrived at the top end of the reserve at Sunset Beach. 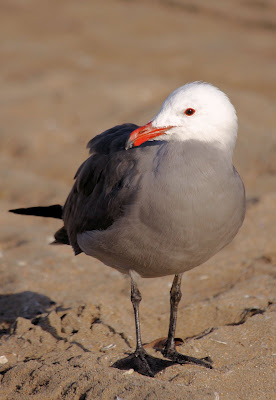 The bus stop is right by the beach and some Heerman’s Gulls were showing well. I took a few moments on the beach, scanning just beyond the surf line and seeing thousands of dark ducks which proved to be Surf Scoters with a few Brown Pelicans scattered amongst them. 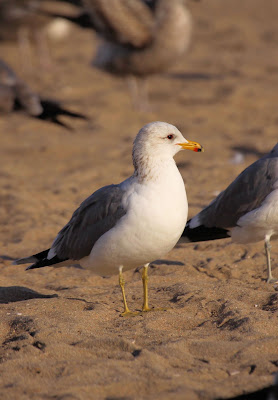 A small roost of gulls held Californian and Ring-billed Gulls.
The tide had reached it’s peak a couple of hours previously and was just starting to expose mud as it ebbed from the reserve. Birds were starting to feed. Most obvious were the dowitchers. Trying to choose between long and short-billed versions has always been tricky. Today I was close enough to hear the occasional sound from them. Long-billed Dowitchers chatter to each other while feeding. It was the absence of this that gave me their identity as Short-billed Dowitcher. 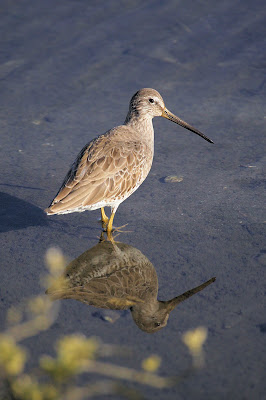 I was very lucky to be able to get so close and luckier still as other birds joined them. Western Sandpipers and Dunlin fed on the very edge while Marbled Godwits and Willets were able to wade a little deeper. 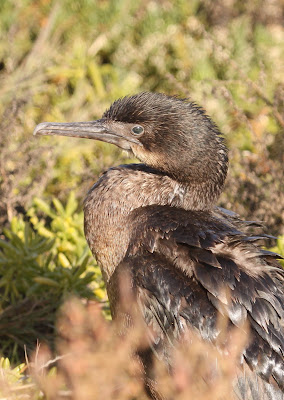 A Double-crested Cormorant was huddled in the saltmarsh vegetation. On the deeper water, Lesser Scaup, Bufflehead and Eared Grebe dived to feed. It was clear enough to be able to watch the grebe under water. 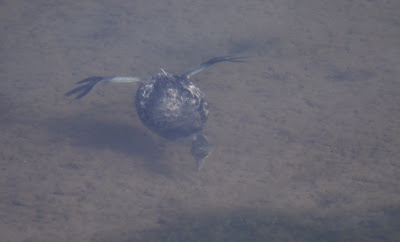 At the southern end of the first body of water, a sluice gate empties from a relief channel. This channel passes through the reserve draining it and annexing a freshwater area to the north. 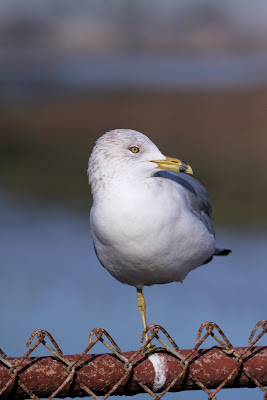 A Ring-billed Gull was posing nicely.
I chose to walk up the Northern bank of the channel to explore the freshwater area. Here were ducks; Green-winged Teal, 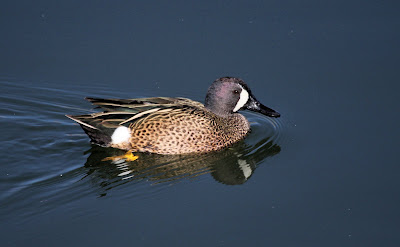 Blue-winged Teal, Northern Pintail, American Wigeon and Mallard. A Harrier sat out on the marsh. 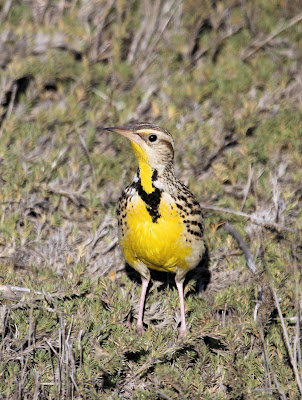 On the bank below me I had my best ever view of a Western Meadowlark. The river behind me was full of Ruddy duck with some American Coots. In the river side vegetation, Belding’s Sparrows scuttled about like little mice.
Some locals who looked as if they should know, were admiring a Western Grebe, but I preferred to go for Clarke’s Grebe. 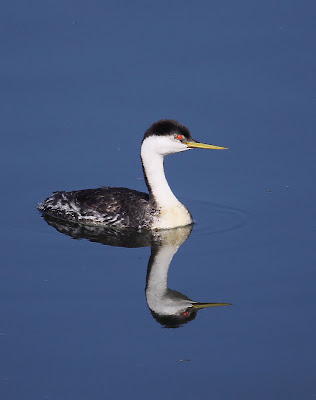 The lighter mottled sides, the brighter bill and lightness around the eye suggested I should.
I set up a shot waiting for the Harrier to fly, but was distracted at the vital moment by a mad woman. I usually resent people talking to me for no reason and today was no exception, but the people around here are keen to interrupt. A more generous blogger might observe how friendly people are. There certainly are a lot of them on a Sunday. Runners thundered along the board-walk shaking my camera. I wonder if that is why they are called joggers?
I returned to the sluice gate and walked up the other bank which put me into the salty area again.
One of the birds that I had hoped to see today was the Reddish Egret, and I was very pleased to see one although quite distant. It was dancing around like a drunken aunt kissing children at a wedding. The Reddish Egret is surely one of the most fascinating birds to watch and I took a while to enjoy it. 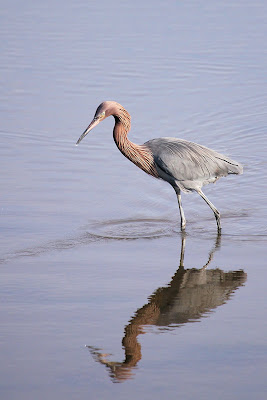 The picture was taken later on at a closer approach. Unfortuneately, it seemed to have run out of steam by then.
The sun had reached it’s highest point by now and was at my right shoulder giving beautiful views of Long-billed Curlew, Grey Plover and a fishing Forster’s Tern to my left. 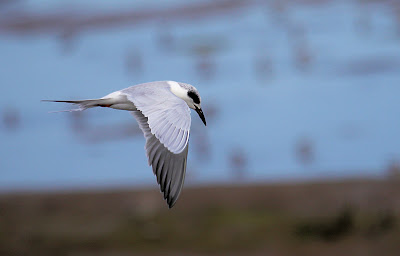 The Western Sandpipers thronged the mud in their many hundreds. I had hoped to find a few Least Sandpipers Amongst them and had been combing the flocks for a more conspicuously marked pelage and yellowy legs. 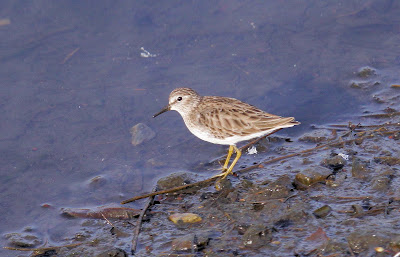 At last I found one and then two, three, four. From that moment on it seemed that all the tiny peeps were least. Beyond them I noticed a Little Ringed Plover and had to correct myself to a fellow birder. It was of course a Semi-palmated Plover.
I had nearly reached the short board-walk and was taking in some of the changes since my last visit. A lot of earthworks have been carried out and the inland water bodies have been linked to the ocean. View points have been furnished with benches for tired soldiers.
A gull roost on a nearby island held Western, Ring-billed and Californian gulls. Also on the island were Sanderling, Ruddy Turnstone and more Grey Plovers. One of the plovers had found something to eat which was drooping from his short bill. 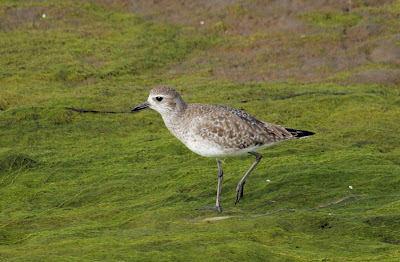 Just for a second, I thought it was a Curlew Sandpiper.
At a rough guess, I could probably see about 20 species from where I was sitting; gulls, waders, ducks, cormorants and a Peregrine Falcon way off. It was hard to tear myself away, but I wanted to visit the board-walk by the car park. Here there were 5 Redhead among the scaup. Some Northern Shoveler put in their first appearance of 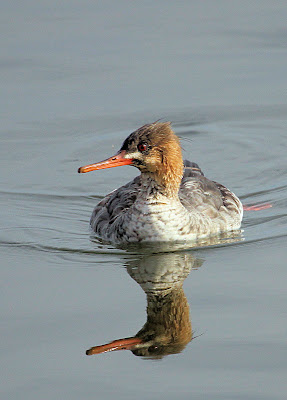 the day and a Red-breasted Merganser came close enough to show off her teeth.
It was time to start heading home and I retraced my steps to the relief channel. 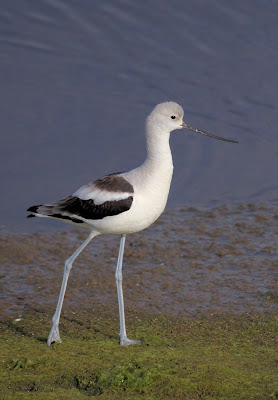 More Least Sandpiper were joined by an American Avocet in the shallows. I turned inland with an idea to look up some burrowing owls that the mad woman had mentioned. 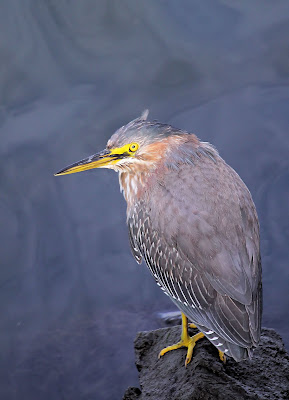 A Green Heron sat well for me as I walked east, but joggers disturbed this American Kestrel immediately after the picture. 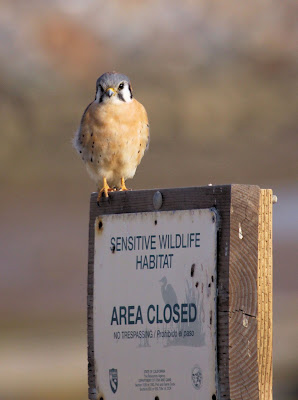 Sadly, when I reached the described spot, some owl botherers had skipped the fence into the protected area and were creeping about very close to the burrow. 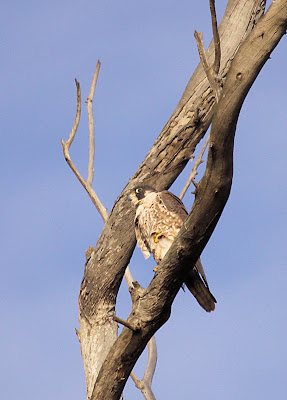 A close look at a Peregrine made up for missing the owls and two local ladies, Zorissa and Sammy, shared the sight. On a bank beneath the falcon, California Towhees and White-crowned Sparrows appeared not to have seen it.
The light was fading now on what had been a very productive day. The light had been good and the mercury had reached an un-seasonal 25C. It was a stiff walk back to Sunset Beach where I saw the tail-lights of the bus heading north up PCH.
It would be feasible to make this trip from Long Beach, but I would not recommend it to my colleagues staying in Redondo Beach, as I was on this occasion.
The 232 bus leaves from Beryl and PCH, just by Whole Foods Supermarket. Change at Long Beach Transit Mall, on 1st and Pine, to bus 91, 92, 93 or 94 towards 7th and Channel. Change again at the Veterans Hospital, taking the 1 to Sunset beach.
On Sunday most buses only go once an hour. The reserve is busy too with cyclists, joggers and families. On weekdays as I recall, the reserve is much quieter and the buses are more frequent.