Even the bad days are good.

There are some places that grow on you, sites that you become familiar with and accustomed to, places that fill you with anticipation and excitement. 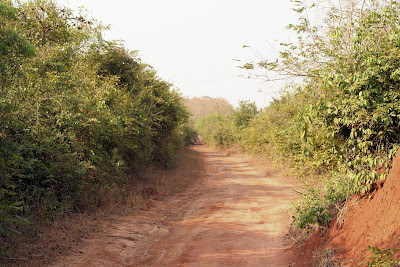 I don’t think that Achimota Forest will ever attain such favoured status.
The guard on the gate needed a bribe to let me in and then insisted on taking me to a sad little zoo with a few monkeys and a cage over-stuffed with birds.
It is an area of thick bush and the forest is denuded to such an extent that it barely deserves the name any more.
From the gate, a dirt road passes through the scrub with side roads dividing the area into rectangular blocks. From the birdsong, one would assume that the birds are plentiful, but the bush is so thick and the birds so unapproachable that I did not even bother to take out the big lens.
I did get some good views of the Yellow-crowned Gonolek, and the Grey-backed Camaroptera, but all the others on the list below were fleeting glimpses.
I walked for about a kilometre beyond the zoo. The tantalizing feeling of hearing birds in the bush turned to frustration when the birds refused to come out to be spotted. Eventually, I turned back and bailed out of Achimota Forest in favour of a quick look at Labadi Beach.

A bridge crosses a polluted river just east of Labadi Beach Hotel. The river seeps under the bridge into the ocean immediately south.

Waders such as Common Greenshank, Common Sandpiper, Whimbrel and Black-winged Stilt, picked along the sandy bank while Western Reef Egrets and Little Egrets waded deeper in. 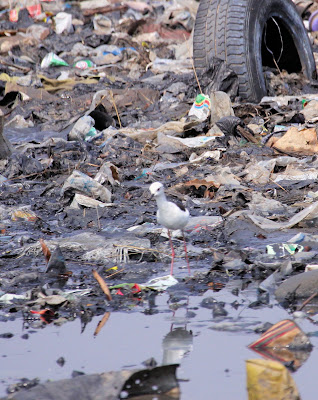 The northern (inland) side of the bridge was a shocking mess of rubbish, but I was tempted to get the bigger lens out at last by a hovering Pied Kingfisher. 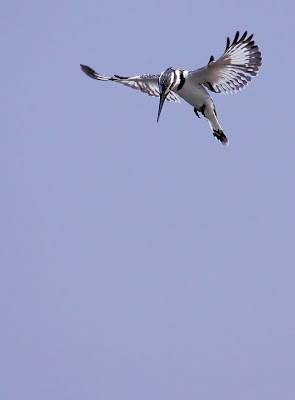 Spur-winged Plovers and Wood Sandpipers fed amongst the litter while a Squacco Heron and a couple of Grey Herons roosted in the mangroves.
I must have been in a funny mood today as I could not shake off the irritations of the day and was becoming increasingly dispirited about birding in Accra. So Emmanuel drove me back to the hotel and we agreed to try again later at Aburi Botanical Gardens.

The botanical gardens at Aburi are on an escarpment about 35kms north of Accra. It was less humid here as well as a couple of degrees cooler. It took about one and a quarter hours to get up there.
The first striking feature of the gardens is the palm-lined road. 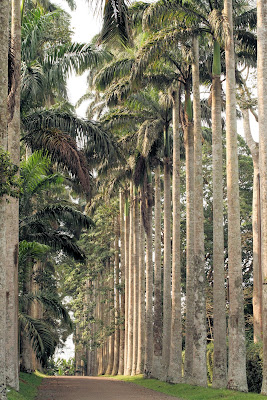 At the top of one of the dead palms was my first bird of the afternoon, a Splendid Glossy Starling with it’s white eye making identification straightforward. 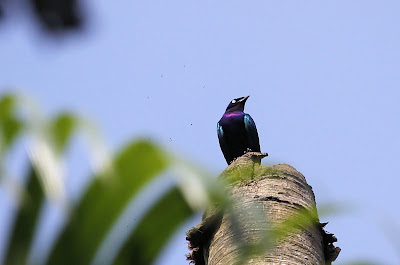 I didn’t realise at the time, but I inadvertently included a few Mottled Spinetails in the picture too. 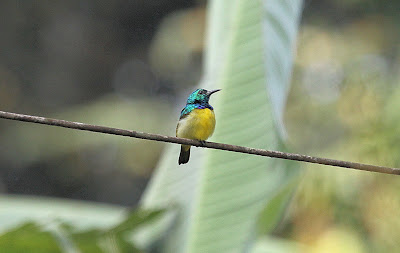 Collared Sunbirds were sitting on a wire lower down with what I took to be a form of double-collared sunbird nearby. I had to look him up in my Helm field guide to “Birds of Western Africa” (Nik Borrow and Ron Demey), and lo…! 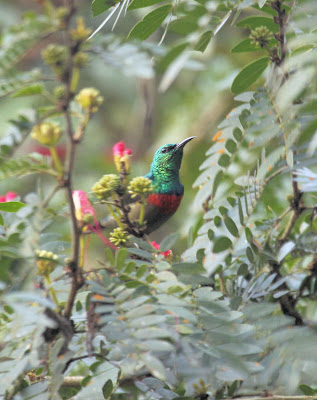 It was an Olive-bellied Sunbird. Through the hedge I could hear the piping calls of the African Pied (Allied) Hornbill. 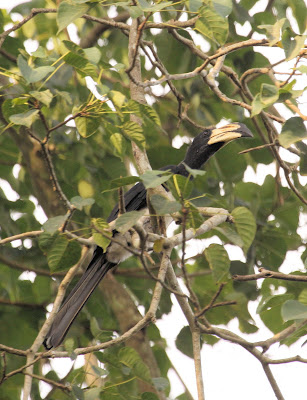 Four of them were calling and chasing through the treetops.
Some dragonflies distracted me for a short while and a separate 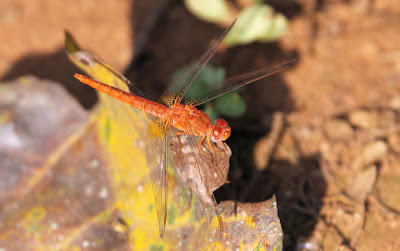 post will be found on http://www.redgannetsdragonflies.blogspot.com/
Returning to the road I managed to get a shot of the hornbill as it was calling. 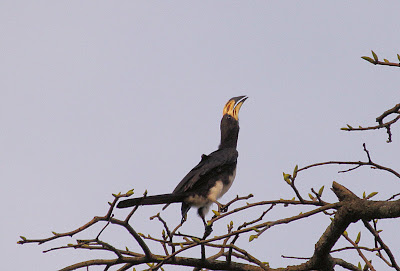 In a bush beneath him I saw a Spectacled Weaver. For the second time today my homework had paid off. I had been swotting up before the trip and noticed that although the Spectacled Weaver is not present in the area, the very similar Black-necked Weaver is. I would have liked to get a better look to see the sturdier bill, but was unable to see it well enough.
At the lower end of the gardens is a wilder, overgrown and more “birdy” area. A flowering tree outside a restaurant was attracting the sunbirds with both olive-bellied and collared feeding there. The light was dimming now but I tried a few shots before heading back towards the car. 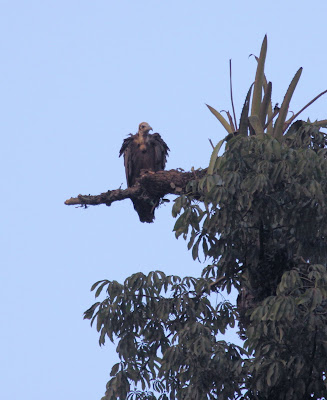 For the third time this afternoon, I saw a bird that had a passing familiarity, yet which I knew did not occur in the region. Therefore out came the book again to confirm my first lifer of the decade, a Chestnut-winged Starling.
Just before reaching the car, another flowering tree was playing host to a Splendid Sunbird and a Pale Flycatcher. This was proved to be the most productive 30 minutes of the day.
Despite what I said about Achimota Forest and birding in Accra earlier, it was still better than being at work. Even slow and frustrating days in Africa are better than not being in Africa at all.
Thanks to the concierges Mohammed and Daniel and to Emmanuel for driving me around.
Once again I owe a debt of thanks and more beer to G.L. for his trail-blazing and for passing on his experiences.