Opinion differs about the opening hours of Century Park in Shanghai. Confusion may occur as the times vary according to the season (see below) and paid up members are allowed access before the public gates are open. I made a special note of the times but, as if there were some strange conspiracy, have misplaced the piece of paper. I recall that it opens at 07.00 between March (15th?) and November (15th?) and an hour later during the winter. It closes at 18.00 between March and November and an hour earlier during the winter. 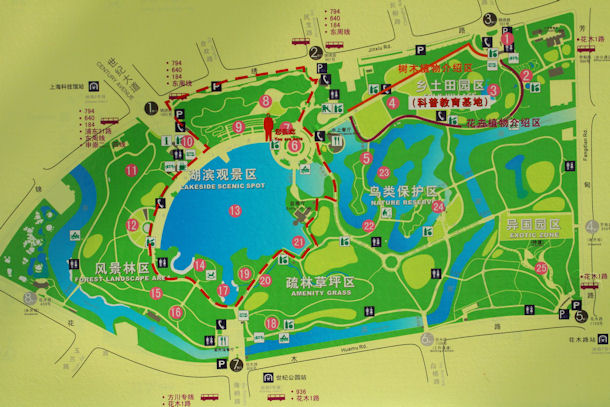 I arrived just before 07.00 and the park opened shortly after I had paid my 10Yuan entrance fee. I watched the tai chi session as the local early risers brandished their swords in ritualised exercise and secretly wished that I had brought along my light-sabre so that I could have joined in. Century Park surrounds a canal and a lake in about 140 acres with a “Nature Reserve” in the middle. Birds were plentiful but the number of species was low. Most obvious were Light-vented Bulbul, Azure-winged Magpie and the hulking, local form of Eurasian Blackbird. 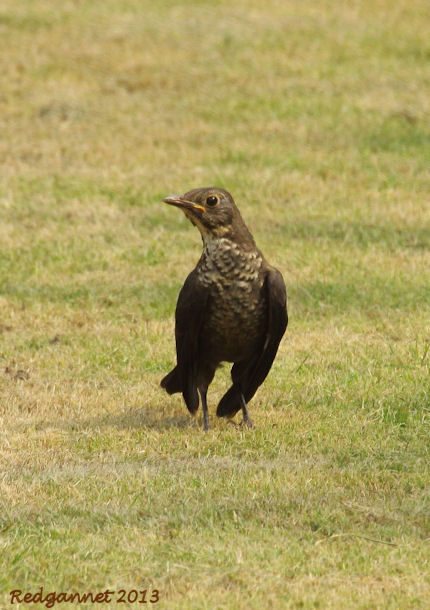 I took an anticlockwise route around the lake, starting from the entrance at Century Avenue at Google Earth ref; 31 12 47.97N 121 32 46.85E. The park has matured since I first came here and the military planting appears to have relaxed somewhat as the trees have filled out. Even so, there is still a structured, plantation feel. The bank-side vegetation has grown and softened the edges of the lake in the southwest corner, though the kerbstones marking the high-water mark remain. Most of the birds were very wary and close approach was difficult. Only a Long-tailed Shrike stopped long enough for a close-up. 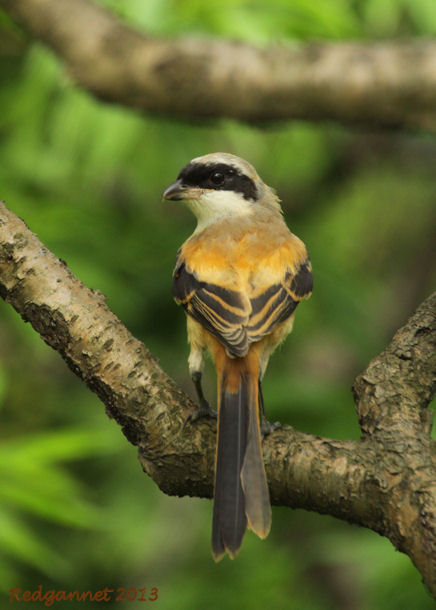 A few dragonflies were up early and this one tempted me out onto a precarious rock to get a better view.  It looks like a Golden Flangetail, Ictinogomphus pertinax. If anyone cares to venture an opinion, I would be pleased to hear from you. 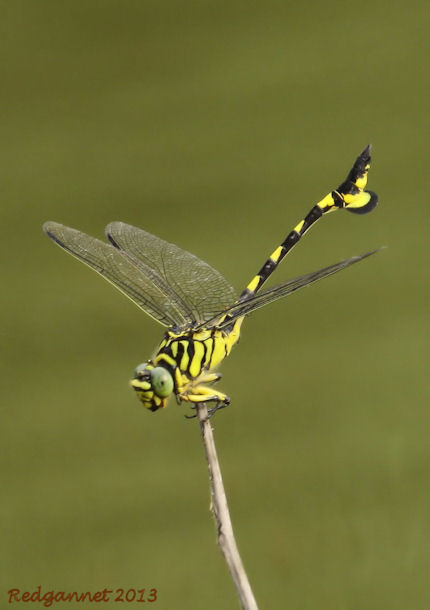 This section of the park was quite productive with Great Tits and Eurasian Tree Sparrows seen in the trees, Vinous-throated Parrotbills flushed from the reeds and Common Moorhens in the margins. 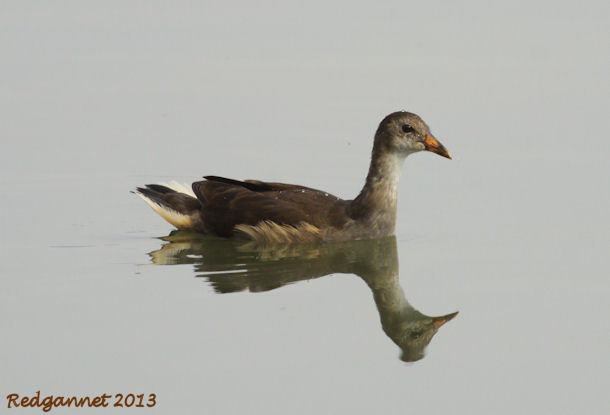 The Amphitheatre at the westernmost edge of the lake brought a few species, with White Wagtails and Red-billed Starlings adding to the list. 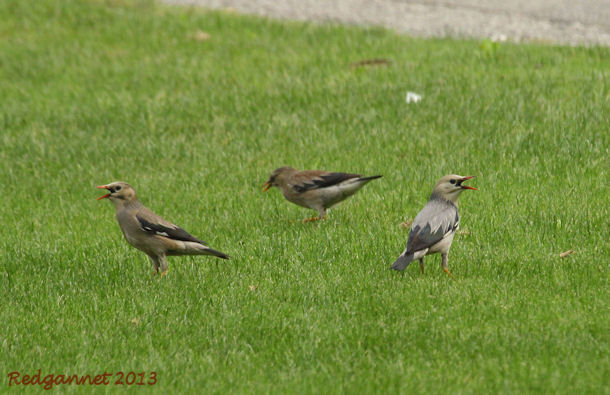 I followed the lake around until I reached the “Nature Reserve”. This area supposedly existed as a sanctuary for wildlife. Signs banned fishing, yet a fishing management office within the reserved area sold permits to fish here and threw their waste into the water behind the office. A sign revealed that aspirations were low in that “over a dozen” species of bird had been recorded on Bird Island. 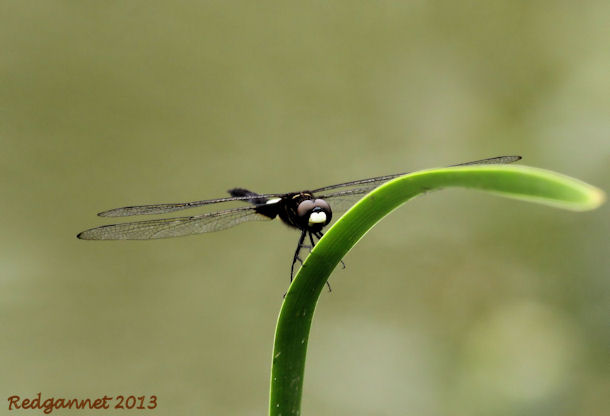 Odonata were common here with Pied Skimmers, Pseudothemis Zonata, making up the bulk of the sightings. The males with the white face and white saddle jockeyed for position along the water’s edge while the females, with the yellow markings, preferred to stay higher up the bank. 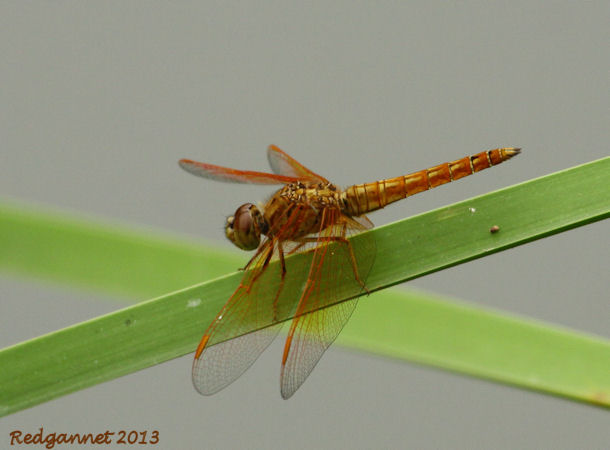 The Asian Amberwing is a common species here and flies for much of the year. 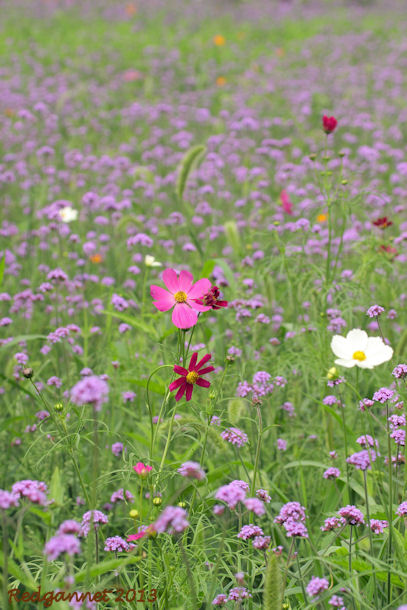 There was a concession from the structured to the natural in a small wildflower meadow. Actually, the wildflower meadow was contained and managed, but just for a few moments as I passed through the charming feature, I was able to escape the controlled ranks and rows of plantings and enjoy an apparently spontaneous outburst of colour.
Birds seen; 15
Little Grebe 3, Little Egret 1, Chinese Pond Heron 1, Black-crowned Night Heron 3, Eurasian Moorhen 3, Spotted Dove 8, Long-tailed Shrike 8, Azure-winged Magpie 20, Great Tit 5, Light-vented Bulbul 40, Vinous-throated Parrotbill 4, Eurasian Blackbird 30, Red-billed Starling 13, White Wagtail 3, Eurasian Tree Sparrow 25.
There are a few entrances dotted around the perimeter of the park. I used the one on Century Avenue opposite the Century Park, Shanghai Metro Station on Line 2. As discussed earlier, there is a conspiracy to keep the opening times secret, but  I recall that it opens at 07.00 between March (15th?) and November (15th?) and an hour later during the winter. It closes at 18.00 between March and November and an hour earlier during the winter.
Posted by Redgannet at 06:17