December 1st.
What with one thing and another, I have not been out with my binoculars for nearly 6 weeks! That is a very long time to be indoors. So I found a window and scrambled out into the December chill. 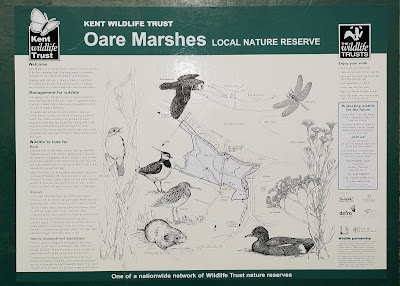 I headed for Oare Marshes at Faversham on the Thames Estuary.
I stopped on the road that bisects the reserve and had a quick scan across the eastern floods. A number of small islands give good roosting at high tide for the many waders that love to feed in the estuary. On the islands today were Golden plovers. They out-numbered everything else combined it seemed. One still maintained the remnants of it’s summer black. Northern Lapwings are always abundant here and made up the next most populous species. The bronze award went to the Redshank. One island appeared to be the sole domain of the Black-tailed Godwit. There are often a few bar-tails amongst them, but I couldn’t winkle one out today. Closer inspection showed a few others such as Dunlin and Ringed Plover.
Other numerous species were; Cormorant, Greylag Goose, Shoveler, Mallard, Wigeon, Teal and Coot. 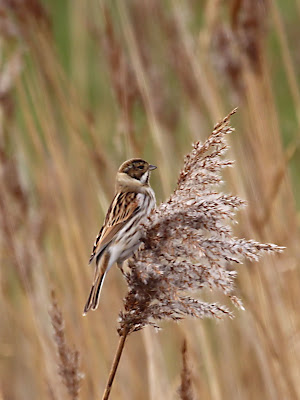 I set out from the car park along the path that runs beside the estuary, heading towards the Sea Wall hide. The estuary to my left was just approaching high slack water.
A couple of Bearded Reedlings bent the reed stalks over as I approached the hide, but they did not come into the open for a good view. Out on the water were Herring, Common and Lesser Black-backed Gulls, Great Crested Grebes and a few Cormorants flying over.
Beyond the hide, the path bears south along the eastern side of the reserve. 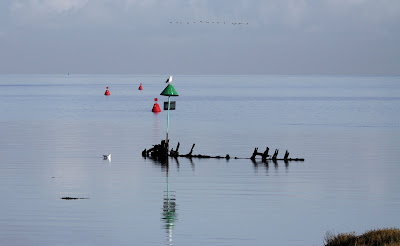 The light is much preferable in this direction although the sun was weak in the early December morning. Looking back across the eastern floods I was watching the island covered in Godwits when suddenly everything took to the air. 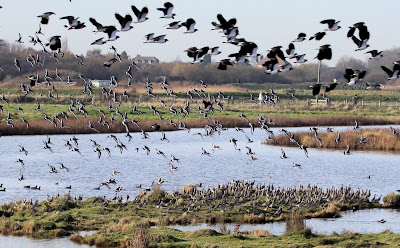 Is there a term for the sudden take-off of all the birds? We use expressions like “something has put the birds up”, or the like, but is there not an onomatopoeic word like a “whoomph” or an indication of panic like a “flapper”?
So…, the godwits whoomphed in a flapper. Hmmm?
There was not a bird of prey obvious, but flying over was a Glossy Ibis (a newby for my UK list), 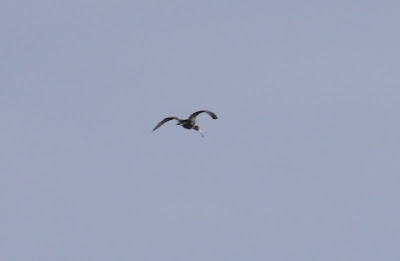 it’s long, curved bill easily visible. It was flying north towards Sheppey. There are a few ibis around at the moment with a handful staying over at Dungeoness currently.
I noticed another small group of reedlings and settled on the bank hoping that they would come out for a picture. I had to wait quite a while, but eventually one of the males found a clear place to sit. 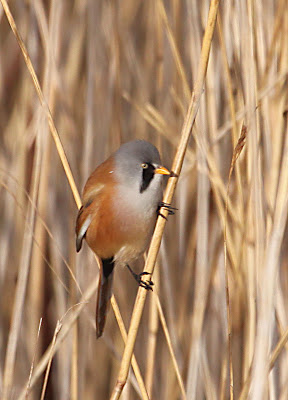 I continued on the path leading along Faversham Creek as far as the outflow where a Rock Pipit watched from the rail.
Another whoomph signalled a big flapper(this isn't working. Any sensible suggestions will be considered). Looking round, there was the ibis flying over again. As it came towards me, head-on, it did have the look of a raptor about it. I feel that the birds were reacting to the ibis. Perhaps they were being cautious and whoomphing in response to the perceived threat of a big, unfamiliar shape. 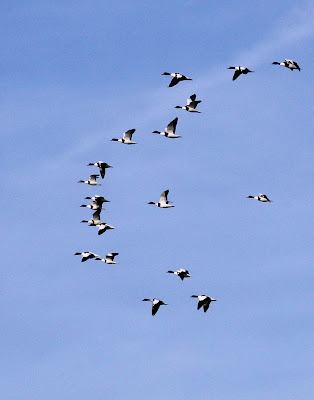 I returned the way I had come to take advantage of the dropping water level and watched the birds flying over on to the freshly exposed mud. Redshanks were first out. Soon there were Dunlin and Black-tailed Godwits too. 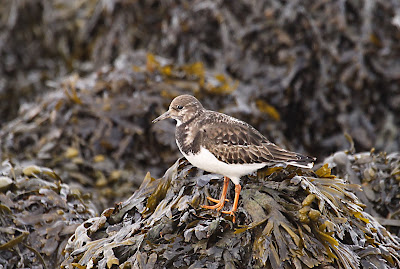 A Ruddy Turnstone picked amongst the seaweed on the rock by the seawall.
The afternoon darkened very quickly and my internal clock was telling me to head home, but when I got to my car it was only 14.00 so I took a quick walk onto the western scrape.I had hoped that Short-eared Owl might put in an appearance. Apparently it is a poor year for short-ears, but a Barn Owl put in a great performance as understudy.