Today was to be a “twitch”. G.L. had put me on to a Gyrfalcon at Boundary bay south of Vancouver (incidentally, G.L. has been responsible for nearly 20 lifers for me this year and still, I haven’t bought him a beer. Soon pal, honest).

I kept an eye on the falcon through posts on http://www.bcvanbirds.com/ and was pleased to note that it was staying in the area. Thank you to the members of bcvanbirds who replied to my request for information and directions. 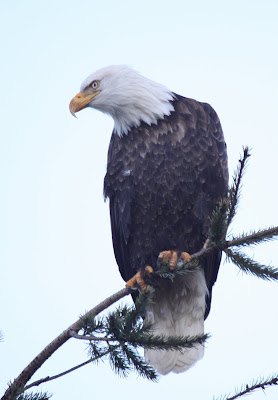 The excellent, new Canada Line whisked me from downtown Vancouver to Bridgeport Station in 17 minutes. From there it was a simple skip on the 351 from bus stop 8 to Matthew’s Exchange. 96th St. starts just east of here and heads 2kms south to the Boundary Bay Dyke Trail. As I alighted from the bus, I thought I saw the first rays of the sun breaking through the clouds. But once I got my bearings, I realised that the lights were in the west and were in fact the lights from huge arrays of greenhouses, reflecting off the low cloud.
There was no sunrise today, just a gradual, insipid change from dark to murky as I walked south on 96th St. But, I was in perfect position, arriving as dawn coincided with a tide approaching it’s highest point.
As soon as I breasted the rise on to the dyke, there were birds, thousands of them. Immediately obvious were the Pintail and Teal on the water right in front of me and the Dunlin wheeling in flocks right across the bay.

Further out was a tightly packed raft of scaup. Flying over were small groups of Glaucous-winged Gulls.
The dyke, with the trail on top, runs along the north shore of Boundary Bay and protects farms and a couple of airports from the sea. The tide today was reaching nearly to the trail itself. This left the Dunlin with nowhere to rest and the sky across the bay was thick with clouds of birds. When some of the flocks amalgamated, they formed a thick band of birds that filled the entire width of my vision.
I do not recall seeing so many raptors at one go before. Bald Eagle, 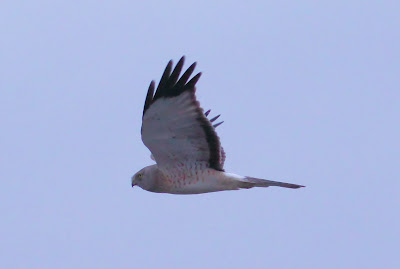 Northern Harrier and Peregrine Falcons ensured that all the birds on the bay were on their guard. At one point 2 peregrines were harassing a flock of Dunlin. A Merlin caught a sparrow from the grasses on the shoreline.
But my goal today was a mast to the west of 96th St. that the Gyrfalcon was said to frequent. I scoped the tower from a couple of different positions, but could not see anything. I was prepared for this and had a plan in mind. I began to walk towards the east with the intention of doing so until the sun appeared. Then I would return to the west with the good light following me and facilitating some magnificent photography. The cloud stayed obstinately thick and low and I would probably still be heading east, if I hadn’t run in to Monica at 104th St.
Monica was conducting a shorebird survey for Bird Study Canada. To do this she was counting Dunlin. Not a job I would relish. She was heading west, so I imposed myself upon her and together, we returned the way I had come. 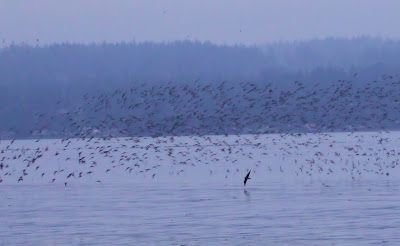 More peregrines were attacking the flocks, but the falcon I wanted to see was much bigger than these. At up to 3lbs, the Gyrfalcon is bigger than a Red-tailed Hawk and only marginally smaller than an Osprey.
From a distance, Monica was able to pick out a shape on top of the mast. Could this be the Gyrfalcon?
A Short-eared Owl showed briefly and a nice flock of American Goldfinches flitted through the bushes inland from the dyke. A formation of Trumpeter Swans flew over.
As we got closer, the shape was certainly that of a falcon. At our closest approach to the mast, identification was still inconclusive. The wings did not appear to reach the end of the tail and the facial markings of a peregrine were not apparent. So evidence was favouring the Gyrfalcon, but this was outweighed by the size. It seemed far too small. We were still 250meters from the mast so scale was difficult to judge, but I was not happy. I took some photos and hoped that they would prove decisive when I blew them up on the computer. 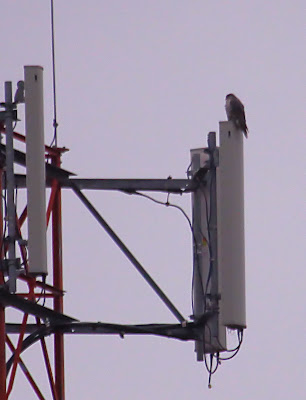 The bird seemed settled and did not look inclined to fly, so we left him and turned our attention bay-wards again. 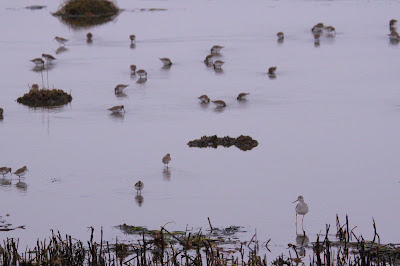 The tide was receding now and the Dunlin at last had somewhere to land and feed. 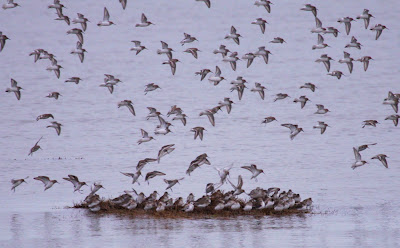 But they were still easily spooked and the never-ending stream of harriers and eagles would not allow them to settle. 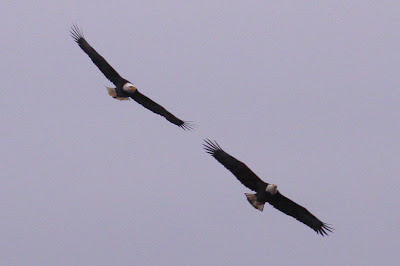 Two of the eagles put on an aerobatic display of close-proximity flying. 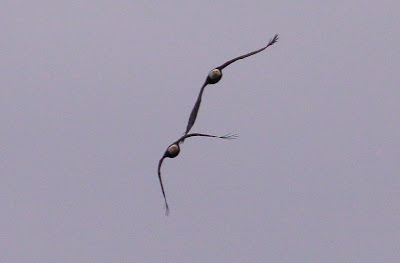 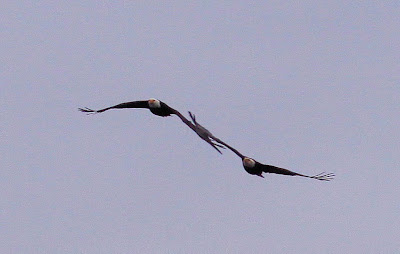 Monica managed to entice me into her car with the promise of a Snowy Owl. This would be a great consolation if the Gyrfalcon was not confirmed.
We made our way round to 72nd St. and parked at the corner of the golf course there. Bald Eagles were very much in evidence on the way there with probably another dozen birds spotted en-route.
The area at 72nd St. has a salt marsh that does not get inundated except at much higher tides than today. Sadly there were no Snowy Owls (possibly due to hunters with dogs), but we did see a couple of Red-tailed Hawks which reinforced my feeling that the falcon on the mast was too small. Monica was surprised to see a small flock of Western Meadowlark.
I send a big thank you to Monica for her company and local expertise and for dropping me back to the train station on an afternoon that was turning chilly. On the way, just before we passed under the Frazer River. Monica topped out the day with some Common Mergansers.
Once I arrived home, I eagerly up-loaded my photos to the computer, but cannot make any more detail than I had before. If anyone from bcvanbirds is prepared to venture an opinion on the Gyrfalcon, I would be very pleased to be put out of my misery. Or if the mast builder could tell me for example that the vanes at the top of the tower are 12 feet long, that would give an idea of scale.
Stop Press, 2 independent observers have confirmed the Gyrfalcon. Thanks guys!
If Monica reads this, I wonder what she will make of my counting?