Late afternoon in Sydney Australia, it has been raining all day and my activities have been curtailed. I met up with a colleague, Sigi, who was keen to try out her camera on the Sydney wildlife and headed for the Botanical Gardens.

At the very heart of Sydney City, the gardens are a delightful place to aquaint oneself with the common local birds.We met two of the most obvious birds of the park before we even arrived at the gate. Rainbow Lorikeets are fantastically coloured birds and they provide spectacular scenes when a flock desends on the fruit at a feeder table. But their glory as a visual treat is spoiled by their assault on ones hearing. Their screeching calls are awful. 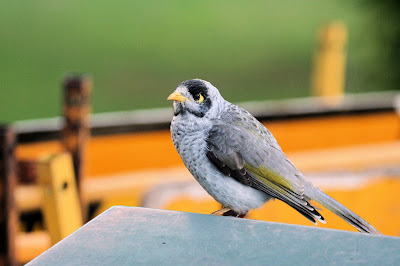 The Noisy Myna by comparison is subdued, but still not tuneful. The Noisy Myna is a Honeyeater, not a starling as the name might suggest. Honeyeaters are one of the families of birds that exist only in the Australasian Zone. 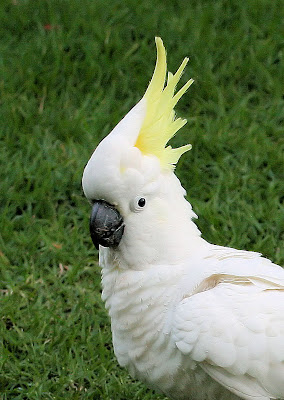 And so into the park. As if the Rainbow Lorikeets were not enough, we almost immediately encountered a flock of Sulphur-crested Cockatoos. It has been said that surrounding property prices crash when a flock of these, otherwise beautiful, birds decide to form a roost, such is the raucous noise. 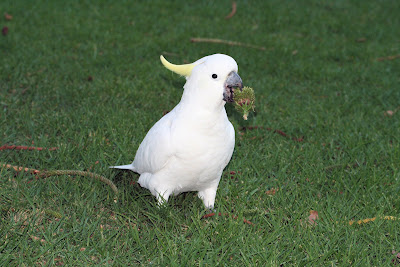 Next we came upon the bats. The Grey-headed Flying Fox colony has been a feature of the gardens for years. 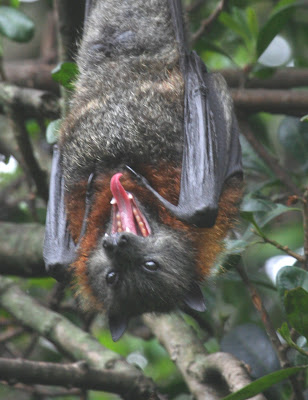 Grey-headed Flying Fox from a previous visit
After trying everything that they could think of to gently encourage them to move on, the park has now accepted these protected animals and the colony is expected to break through 10,000 soon. Bats can also have a bearing on the desirability of a neighbourhood. In Gordon, a suburb of Sydney, there is a colony of 70-80,000 bats, all of whom seem to jettison their acidic fruity waste as they return to their communal roost after a night's feasting. Hence the popularity of carports in the area.

The light was leaving the sky quickly now as Sigrid took pictures of the bats and she was having to use her flash in the gloom. As we reached the small ornamental pond by the edge of the bay the light was almost gone, but a very approachable cockatoo was sitting on the rail of the bridge, so I tried my flash too. 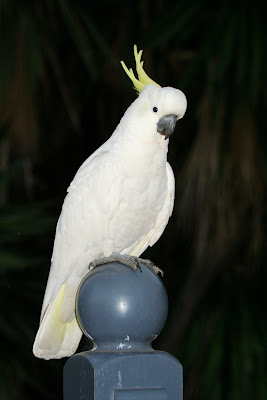 Vey few birds were seen today, particularly missed was the Buff-banded Rail, which should have been very happy in the damp, gloomy conditions.
Posted by Redgannet at 08:43