Bicentennial Park has changed it's name to Sydney Olympic Park. It takes about 40 minutes by train from downtown Sydney. The fare is $4Aus one way. Starting at Wynyard, 800m from Circular Quay, board a Northern (red) Line train bound for Hornsby via Strathfield. The stop for SOP is Concord West. Exit the station to the left following the signs for Kings Street. SOP is 300m straight ahead along Victoria Ave.
Sydney Olympic Park, edging onto the shore of Homebush Bay, comprises the stadia used for the 2000 Olmpics. Of more immediate interest to me, it contains saltmarsh wetlands, mangrove boardwalk, freshwater lakes, indiginous woodland and lawns.
Just before you go through the underpass which welcomes you to Sydney Olympic Park, you will see a sign for Mason Powell Creek pointing to the left. More of this Later.
As I passed down Victoria Ave this morning on the approach to the park, I saw Spotted Dove, Noisy Myna and Common Myna. The Common Myna is a starling, the Noisy Myna is not.
Once in the park I had a particular goal, the bird-watching hide at the far end of the Budu Mangroves. 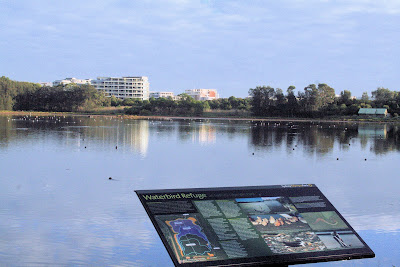 The hide looks out onto a saltwater lagoon. The approach to the hide skirts the edge of the lagoon and I could see hundreds of birds including Black-winged Stilt, Chestnut Teal, Silver Gull and Black Swan, so I had a pretty good idea of what was on the lagoon before I reached the hide. 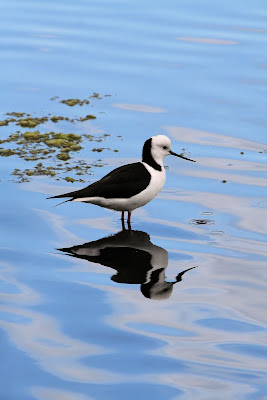 But it was only when I was settled and scanning that I noticed the small waders at the water's edge. I recalled once seeing a Dotterel here and assumed it to be the same species. But there are 2 dotterels from Australia which are superficially quite similar, so I referred to my field guide to jog my memory. 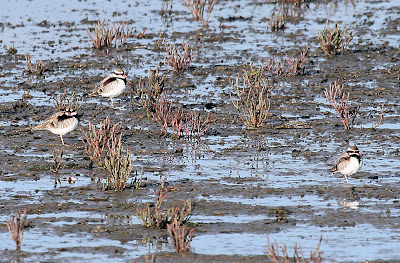 According to my guide, the bird I was looking at was not a dotterel at all, but a Black-fronted Plover. I realised that this is a bird who has disputed family lineage and the name depends on whom you listen to.
Despite questions of his breeding, this is a delightful little bird. The loose flock of 34 individuals were roosting at the water's edge when I arrived. Shortly, reacting to the incoming tide, they began to feed with little darting runs. The rising water levels and their feeding activity brought them closer to the hide. 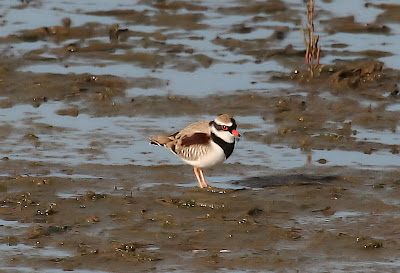 They had been too distant before to get a decent shot, although I wasted a lot of card space trying just the same. Behind them, the stilts continued probing the deeper water with a couple of Bar-tailed Godwits who had stayed behind when the rest of them had headed North for the Siberian summer. 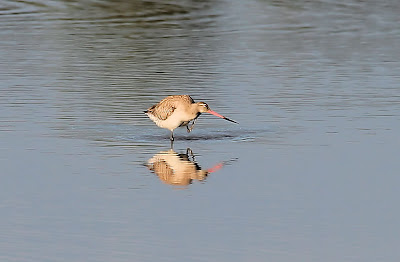 Time was pressing this morning and I wanted to check out the newly renovated wetlands at Mason Powell Creek, recently renamed Mason Park Wetlands. So I started back towards the Victoria Ave entrance. On the way is a bend in the path with a bottlebrush bush hedge. This is usually a good spot for Superb Fairy Wren. Absent on the way down, they were now calling deep in the hedge. 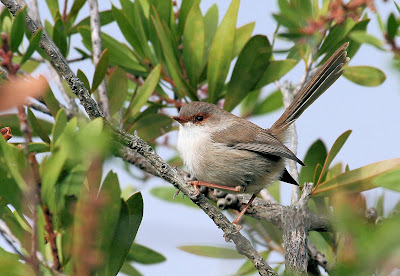 A female responded to some pishing, but the male stayed stubbornly deep in the hedge. As if I hadn't had enough mangrove boardwalks this week, I took a quick detour through the Budu mangroves on the floating walkway. I was rewarded at the other end with a Royal Spoonbill and a Great Egret. As I walked alongside the lawns, I reflected that I had not seen any Magpie Larks. Then as if by magic, one landed right in front of me and pulled a grub from the grass. 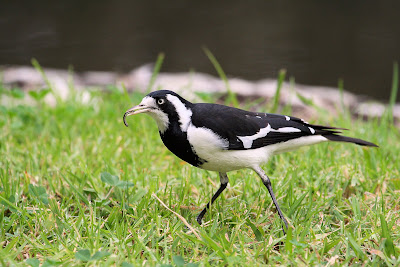 I left the park, and followed the aforementioned sign to Mason Powell Creek. The sportsfields on the left, played host to some Australian Ibis, Australian Black-backed Magpies and Masked Lapwings. At the end of the road, a bridge crosses over Powell Creek and into Mason Park Wetland. This area has undergone renovations recently with extensive plantings and removal of Casuarinas which were encroaching onto the wetland and blocking the flyways.
There were far fewer birds here but I did notice some Silvereye and Welcome Swallows that I had not seen in SOP. 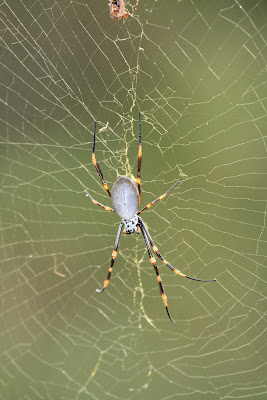 Return trains from Concord West to Wynyard usually run every 30mins. the train due at 11.09 was running 10 minutes late, but easily got me back to the city in plenty of time to start the longhaul back to London via Singapore again.
Posted by Redgannet at 09:20