I have described the Central Catchment Area, Macritchie Reservoir in a section called Singapore Site Guide. This is where I found myself this morning. I was trying a new and exciting way of getting there, but realized that the tried and trusted route as described in the site guide is probably best. 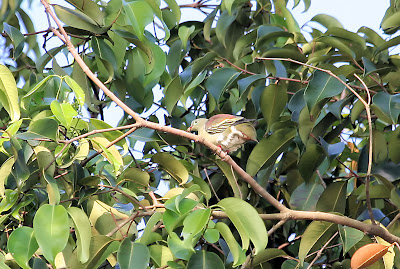 Thick-billed Pigeon
The usual suspects were to be found in the trees separating the fairways on the golf course. From the Lornie Road end of Sime road, I could see into the Singapore Island Country Club ( Bukit )grounds. The line-up consisted of Pink-necked Green Pigeon, Black-naped Oriole and Asian Koel. I didn’t linger long, I was keen to be in the forest.
The first part of the track has been much improved since my last visit, but the second section of the trail was still very rough. I consistently forget how frustrating birding in the forest can be. I go in with such high hopes only to find that either the forest is as quiet as the grave, or that it is full of birdsong without a single bird actually being visible. On this occasion a huge chorus was calling, but managing to flit, in silhouette, through the canopy without me getting a good look.
The morning was already hot and very sticky. Every time that I stopped, my glasses steamed up. I had to take them off and wave them about to clear them. Eventually, 2 Greater Racket-tailed Drongos came out of the tangles and showed that they were the main culprits of the chorus. I was surprised by how much noise they could make between them. A Chestnut-vented Malkoha kept to the shadows, but was distinctive with it’s large size and light greenish bill.
Out in the open of the golf course, 2 Collared Kingfishers sat together on a branch overlooking a water hazard. On my right the reservoir steamed gently. It was so sticky that I was unsure whether the reservoir was giving up water to the atmosphere or the moisture was being wrung from the air itself.
I stopped to try to get a picture of a Thick-billed Pigeon. Despite having ladled factor 15 sunscreen on to myself and although it was only 09.00, I was still being hurt by the intensity of the sun. 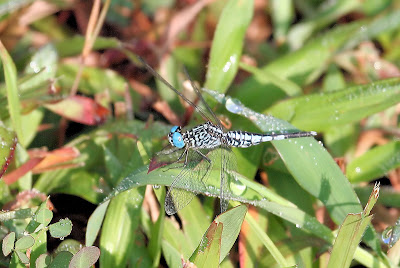 I moved on towards the shade of the boardwalk and the forest beyond. I was halted just before the boardwalk by another dragonfly. I will have to find a good field guide for these chaps. Does anyone know of a good one for Singapore?
The day was becoming increasingly, unpleasantly, hot. There were a few local Singaporeans braving the elements and the unmistakable bray of English ex-pat who was, insanely, jogging with her friend. A little early in the day for mad dogs, but the English do hate to pass up opportunities to show quite how ridiculous they can be. I felt foolish enough myself with my hankie draped from the back of my cap to protect the back of my neck.
Not surprisingly, the birding was quiet. Nothing unexpected had shown up until I moved into the damp section of boardwalk. 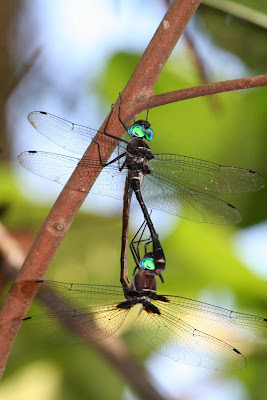 I had stopped for yet more dragonflies when something fluttered up from the ground and alighted about 5 meters away, just visible. I could see it was a nightjar, but could not make out which one it might be in the gloom of the understorey. 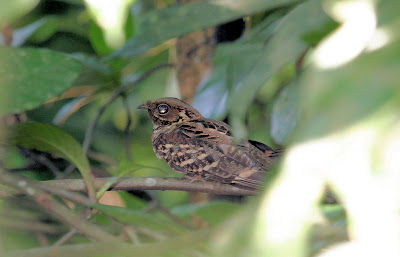 I tried a photo, but didn’t hold out much hope. I was surprised therefore to see quite a bit of detail in the picture when I got it home. There are a few candidates for nightjars in Singapore, so I had to check the mug shots. It was easy to narrow the suspect list down to 3; the Large-tailed, Grey and Savannah. From the evidence, I am tempted to suggest Large-tailed Nightjar, but would have preferred to see the broad white tips on the tail.
I would be pleased to hear any opinions. 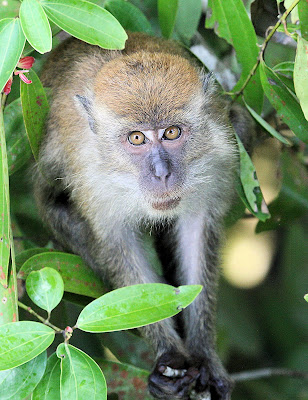 Next, I met up with the Monkeys. Long-tailed Macaques are common in the forest and quite bold. I encountered them just as I was leaving the boardwalk and approaching the Jetulung Observation Tower. The tower raises you up through the mid-levels to the canopy 6 storeys above. There is no shade on the top level, so I set up my stake-out from the 5th. I unpacked some water and a snack and took off my cap and camera. The monkeys had joined me on the tower and were fascinated by all the gear lying around. They kept looking for opportunities to snatch something. 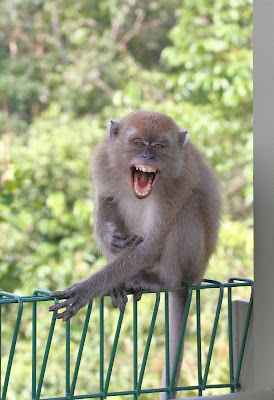 Yawning and bearing of teeth with the white eye-lid display is a sign of aggression and or nervousness among the macaques. It was a little intimidating, but they were quickly moved on with a simple “Boo!”
At last I started to see a few birds. From the 5th storey I saw Orange-bellied Flowerpecker, Scarlet Sunbird, Yellow-vented and Olive-winged Bulbul. The monkeys suddenly dived for cover as a large bird of prey flew by. It was White-breasted Sea-eagle. I don’t suppose the sea-eagle would mean any harm to the macaques and they were probably reacting instinctively to the silhouette of a raptor.
Beyond the tower, the jungle steamed uninvitingly. I was beginning to realize the importance of bringing enough water. I was already beginning to suspect that my meager supplies were going to be hopelessly inadequate. There is a drinking fountain at the ranger’s station. If I had chosen the right fork in the path beyond the tower, I might be halfway there by now. But I had elected to head for the Rifle Range Link and was now becoming quite distressed. The sweat was pouring off me and I had precious little to replace it with. It would be a further 5Kms before I was likely to find any water or transport.
I was becoming so distressed that on seeing a trogon-like silhouette on a branch above the path, I muttered, “Please don’t let it be a trogon.” In other circumstances, it would have been a dream photo, but I had no desire to stop lose any more liquids while taking pictures.
As it happens, I got lucky. After reaching the tarmac road, I only had to walk about a kilometer before reaching a radar array. Against all the odds, a taxi was dropping a passenger here and was surprised and pleased to find another fare.
Normally, I prefer to use public transport as much as possible, It’s not the principle, it’s the money. Today, rather than getting the cab to drop me at the nearest bus-stop, I gladly let him take me all the way home.
My colleagues are of the type who are very fastidious about their appearance. Practicality and necessity are no substitute for fashion and style. Imagine the amazement of two of them as I alighted from the taxi in front of them. Dripping, stinking and still with my hanky hanging sodden from the back of my cap, “Minging” I think was the word they used. Once in the cab and making our air conditioned way along Rifle Range Road, I could see that it possibly held some birding opportunities. There was forest on both sides of the road and it looked quite “birdy”. Perhaps next time I will ask to be dropped at the Radar array and walk the trail in reverse. But this time I will bring more water! 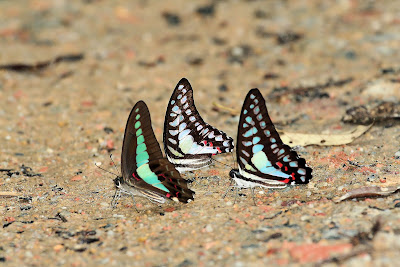