Suikersbosrand Nature Reserve straddles a mountain about 50kms southeast of Johannesburg. A 60km route winds across the mountain passing through grassland and rocky outcrops, acacia woodland and rock-strewn hillside. It covers an area of over 28,000 acres and boasts an eBird Hotspot list of 185 birds.
Another hotspot inside the park, Holhoek Picnic Area was my objective for the visit as it would allow me to get out of the car and walk amongst the acacias, but I had to hurry to make it worthwhile. 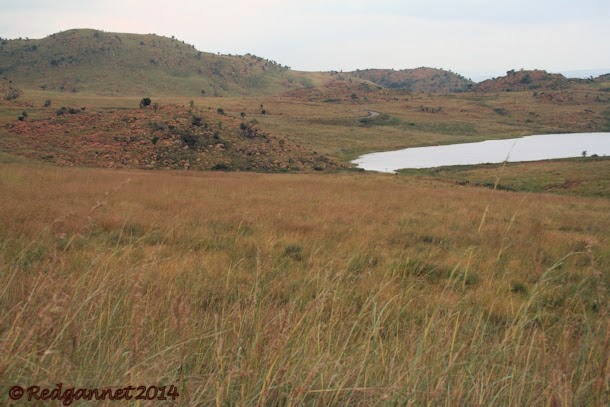 My flight was delayed leaving just 3 hours to complete the 60km, one way circuit, so it was quite a whizz. I was reluctant to stop for larks, cisticolas and pipits as taking the time to identify them would not enable me to maintain my required 20km average speed. Foolishly I had dawdled on the approach road and had nearly banjaxed the visit. 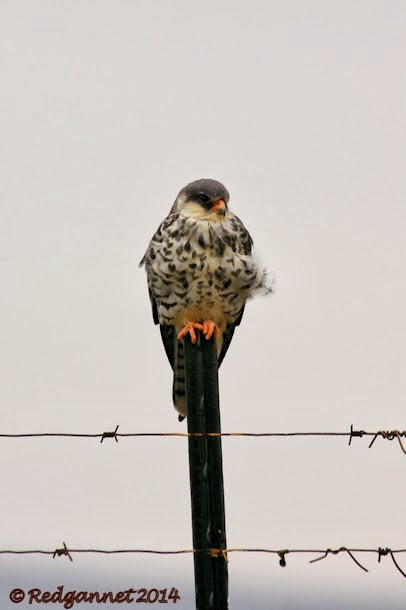 The lady at the reception refused me entry at first, saying that I would not be able to get around by 18.00 when the park closed, but I made a solemn promise that I would be back by six and she relented.
The approach road at the northern entry gate brought lots of Amur Falcons. They like to watch for insects from the fence surrounding this part of the reserve. A Black-breasted Snake Eagle hovered high up and Long-tailed Widows and Red-collared Widows flopped about just above the grass. Once I got onto the circuit, a few birds made it worth my while to stop. 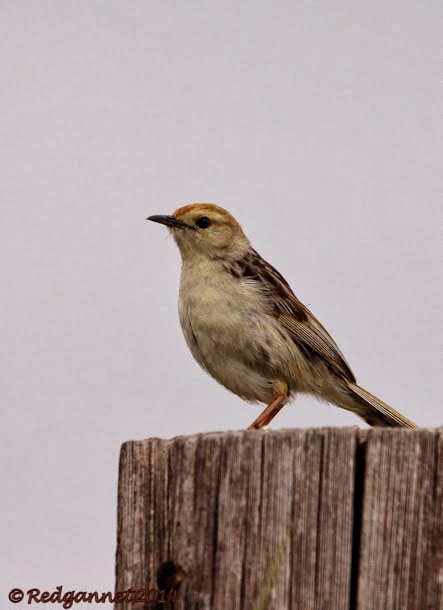 A cisticola sat out on a signpost allowing me to get a picture to peruse later on. I take it to be a Levaillant’s Cisticola, though they are usually more associated with water than high grassland. I don’t recall seeing any water nearby. Mountain Wheatears were common along the roadsides and on rocky outcrops. 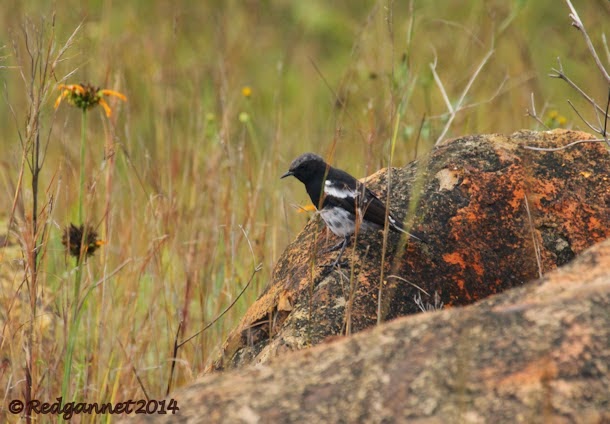 Many of the birds noted were seen at the roadside as the long grass obstructed much of the view at times. My favourite bird of the roadside today was the Southern Ant-eating Chat. They were very common and seen along most of the drive. Their flight pattern is distinctive for its bold white primary patches and the bird is very dumpy, looking like a slow feathery ball in flight. 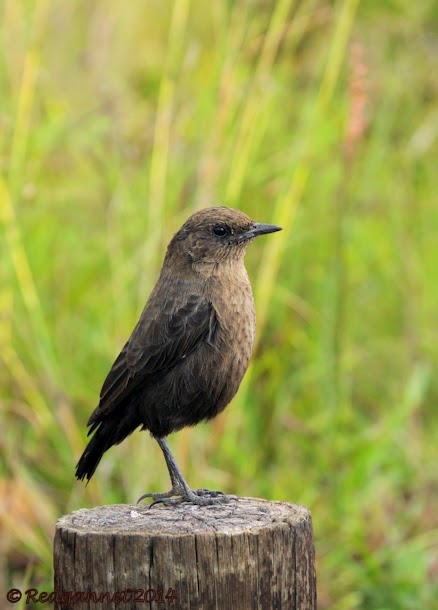 Game animals can be seen along the route, though in my experience, they seem to prefer the southern stretches, about half-way round. Zebra, Eland, Blesbok and Black Wildebeeste were seen as I drew up to the Holhoek Picnic Area at Google Earth ref; 26 32 28.02S 28 13 37.60E. 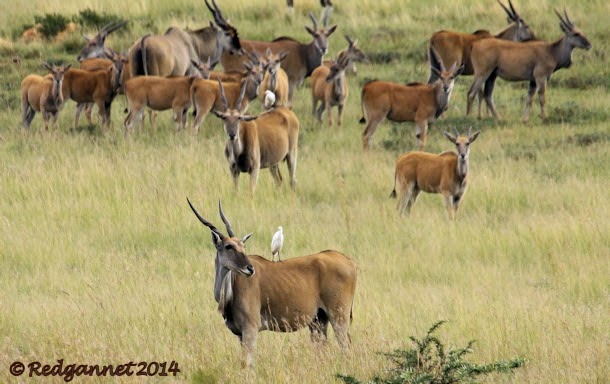 The picnic area is sited amongst the acacias which spill down the mountainside here. With very little time at my disposal, I was only able to make a very cursory glance round Holhoek, but the birds were very accommodating and 19 species showed themselves. Spotted Flycatchers and Fiscal Flycatchers liked to use the posts as their hawking perches. A Hoopoe and a Green Woodhoopoe flushed as I drove in, but stayed nearby. 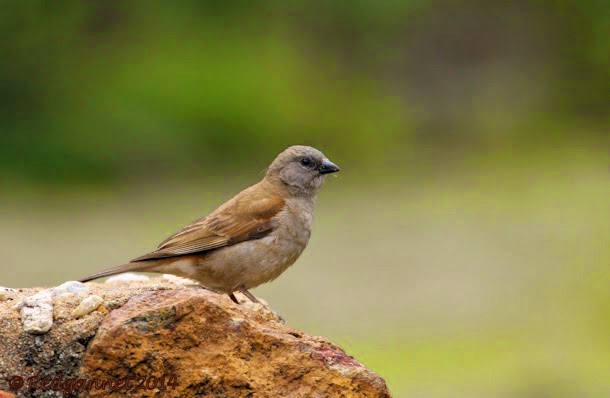 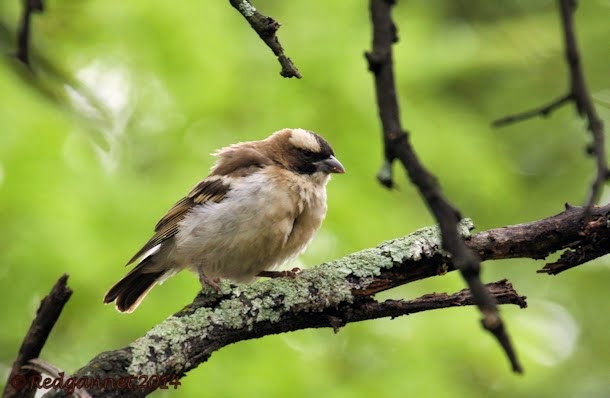 As I pressed on from the picnic area, more game animals were seen with small herds of Springbok and a Red Hartebeest with a suckling youngster.
Time was really against me now and I can hardly recall stopping along the second half of the circuit except to see large numbers of Red-collared Widowbirds gathering to roost in the tall grass and to listen very quickly to the whistling call of a Bokmakerie. 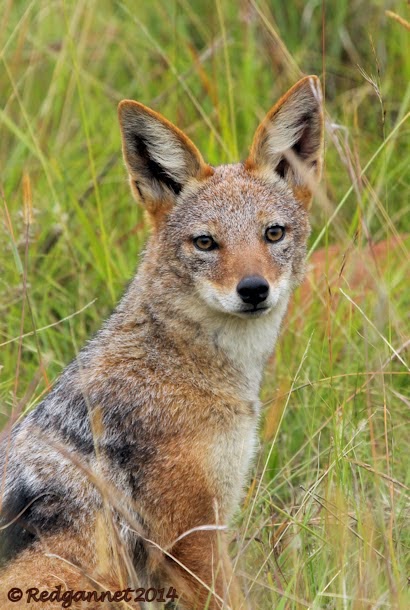 The highlight came towards the end of the road. I had seen a couple of Black-backed Jackals that had run ahead of the car and disappeared into the long grass, but one dashed off the road as I approached and stopped to look back over its shoulder in a thin area of wispy grass enabling me to get a shot. 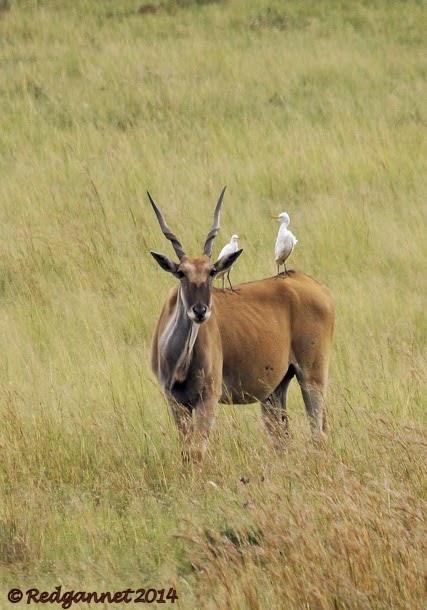 Suikersbosrand can be accessed from the N3 heading south from JNB. Take the R550 west and the north entrance is signed 6kms from there at Google Earth ref; 26 26 16.32S 28 13 10.84E.
The opening times are open to misinterpretation. Most sites agree that the gates allow visitors in from around 07.00. Gates close at 16.00 on weekdays and 17.00 on weekends and holidays. However, I was asked to be out by 18.00 on this Friday evening in March. Make of that what you will. Arrive in plenty of time or risk being turned away. I would leave at least 4 hours to enjoy the park and not have to rush.
Entry should cost RSA20. Perhaps my late arrival prompted a burst of generosity, but I was waved on when I tried to pay.
The circuit is 60kms around and is one way only, so you can’t choose to just do a little bit and return; you have to complete the full lap. 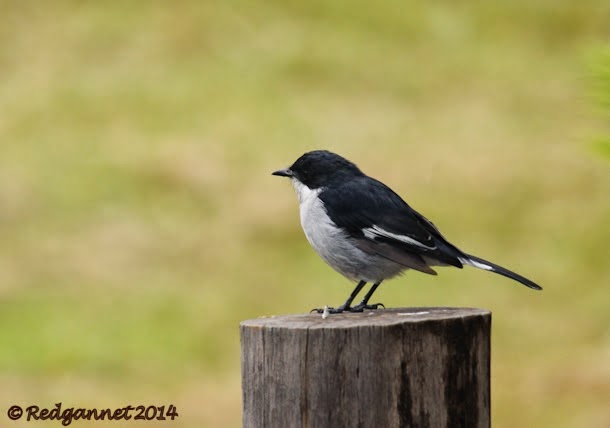 There are hiking trails and overnight huts with basic accommodation for those who wish to trek for a couple of days on the mountain. For details, visit; http://footprint.co.za/suikerbosrand.htm

If you are interested in the geology and habitats of the Suikersbosrand range, this site offers an overview.