I just want to make it clear that I did not fall off my bike. To an inexperienced Redgannet watcher, I accept that my dismount may have appeared sudden and ungainly, but I can assure you that it was intentional.
I took a couple of jaunts into the area during this itinerary, but shall try to include them as one post. For eBird, the list below has been split over three sites; Coppell-Ledbetter Rd, Elm Fork Nature Preserve and McInnish Park. 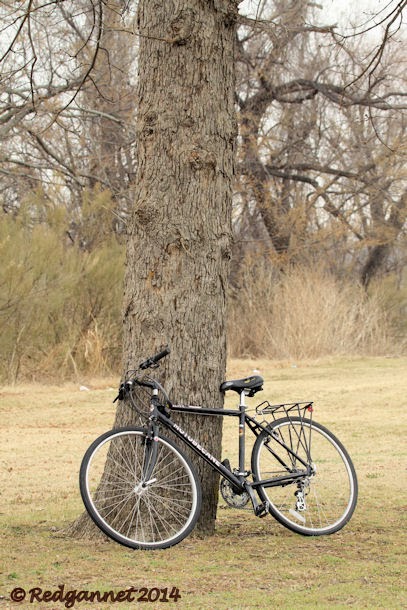 I travelled light with just binoculars on the evening that we arrived and caught the bus to Coppell-Ledbetter Rd to make a quick recce of the area before the sun set. The evening was bright and warm and the first bird I saw was a life Harris’s Sparrow. I wished that I had brought the camera. With just 8 birds and 2 checklists, eBird may be overstating its potential by designating this site as a hotspot, but it was so close to the other two sites that I wanted to check it out and at the same time make sure that I could access Elm Fork Nature Preserve from W Belt-Line Road, so the visit was warranted. Also seen were Eastern Phoebe, White-throated Sparrow, Carolina Chickadee and Great Egret.
The next morning was Saturday and the bus doesn’t run until after 08.30, so I cycled the 30 minutes or so along W Belt Line Rd and sneaked in under the railway line at Google Earth ref; 32577.06N 965547.38W. It was much colder this morning. The low cloud and poor light made me wish that I hadn’t bothered with the camera, but then I saw a Nine-banded Armadillo snuffling through the leaf litter by the edge of the trees and started clicking. Sadly the clicking was to no great effect and I shan’t trouble you with the results. The sports fields here were quiet at 07.30, but the baseball diamonds further up were already busy. 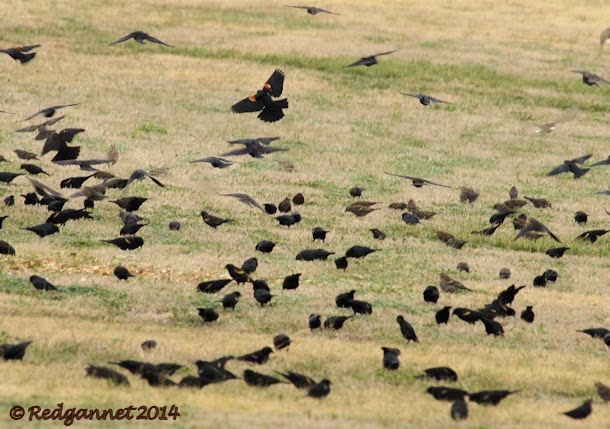 I headed up to the top of McInnish Park and worked my way back down so as to make the best of a short morning. Most noticeable was a large icterid flock made up of Great-tailed Grackle, Red-winged Blackbird and Brown-headed Cowbird. On the far edges of the flock were a few meadowlarks, but I was unable to distinguish between east and west until later. 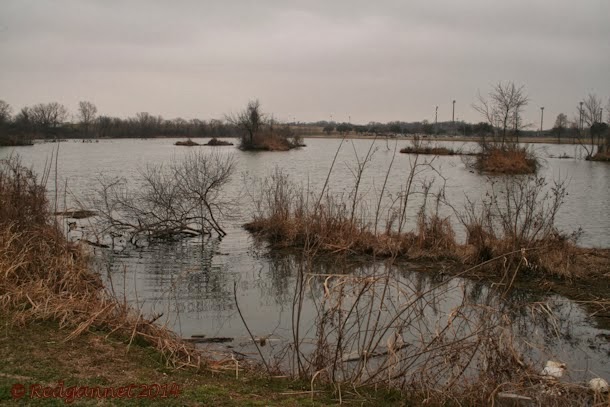 The most productive spot was found along the road on the northern edge of the lake at Google Earth ref; 32 57 47.25N 96 56 18.85W. The lake on this side was shallow with small islands and a more overgrown bank. Green-winged Teal, Gadwall, and Song Sparrow were seen here while Downy Woodpecker, White-crowned Sparrow and Tufted Titmouse were seen in the bushes on the other side of the road. The woods just beyond brought Northern Cardinal, Yellow-rumped Warbler and more Harris’s Sparrow.
The lake to the west had looked very promising on Google Earth, but failed to live up to its potential. A few Gadwall, harbouring a single Pintail amongst them, flushed from the bank and a Great Egret stood on the far side. 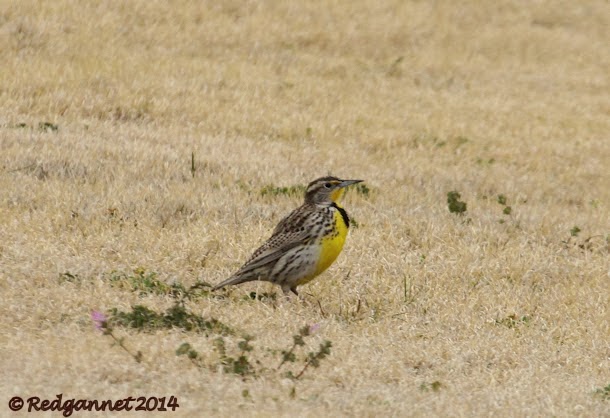 The icterid flock had moved across to the bank by the lake and they moved in a rolling flush before me as I walked along. The meadowlarks were slowest to fly and I was able to get a picture that made me plump for Western Meadowlark.
To the south of the baseball fields is Elm Fork Nature Preserve, a remnant of ancient woodland bequeathed to the citizens of Carrollton, by the descendants of the original owner who had bought it for “woodrights” many years ago, but only cut when wood was needed. Carolina Wrens could be heard from the car lot and one responded to a pish as I chained up the bike. 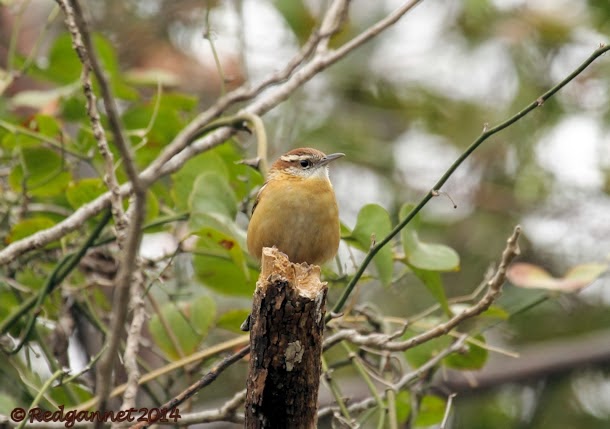 Blue Jays leapt into screeching action as a Red-shouldered Hawk flushed aat my first clumsy footfall on the path.  A circular trail leads through the woodland, skirting the eponymous fork of the river, past a lake on the eastern side and back to a visitor centre which was still closed as I reached it at around 10.30 on this Saturday morning. 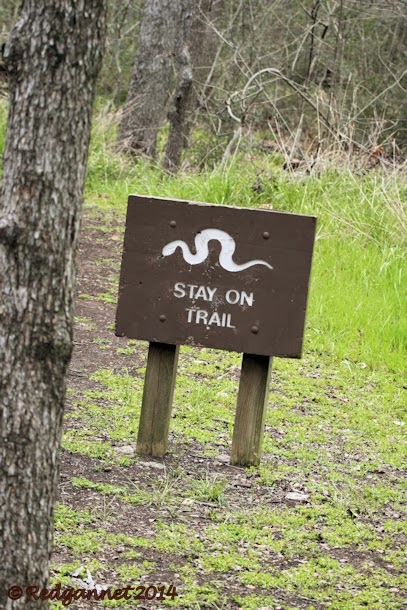 Signs warning visitors to stay on the path to avoid contact with venomous snakes added a certain frisson to the stroll and I confess to giving more attention to the leaf litter than to the treetops. A Red-bellied Woodpecker showed great interest in a sap-seeping scar on a tree trunk and was joined by a Northern Cardinal which took over once the woodpecker moved on. 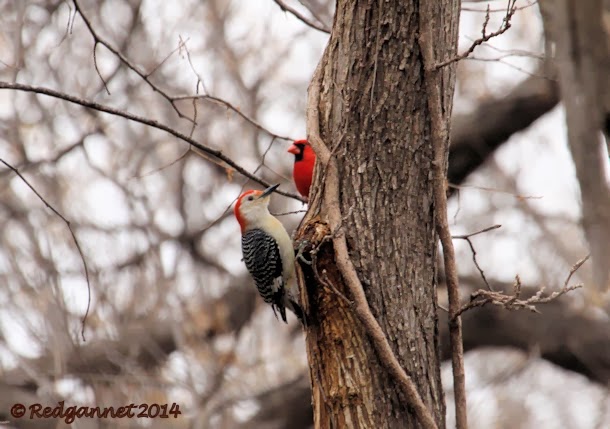 Just to the west is another small wood with a short, circular route on a paved trail. Brown Thrasher, Winter Wren, Ruby-crowned Kinglet and Eastern Bluebird were added from here. On the grass to the south of the small wood, a mixed group of American Robin, American Pipit and American Goldfinch fed from the ground. They had been forced into each others’ company by the football teams which had now taken over on the soccer pitches, leaving just a small area of un-sporty turf in the corner. 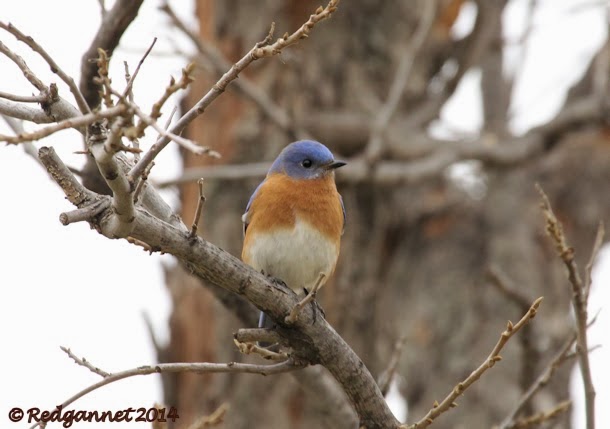 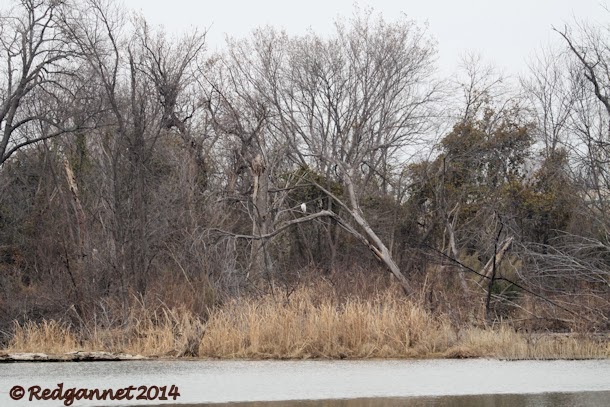 Bus no 400 runs every 30 minutes at peak times and every hour after that and at weekends. It runs east and west along W Belt Line Rd. Fare costs $2.25 and it has a bicycle rack. The nearest stop to the sites above is the turning at Hutton road, just west of Carollton train station, at Google Earth ref; 32 57 7.06N 96 55 47.38W
Cycling on the Belt Line Road is not for the faint of heart. It is a three-lane carriageway with no hard-shoulder or cycling lane. There are a few bridges that cross small rivers. These bridges have no sidewalk or any traffic buffer, so you must cycle or walk in the traffic lanes. It will be necessary to cross the carriageways in both directions to avoid the on-coming traffic.

Visit the dedicated USA and Canada Page for more posts from Dallas, including; White Rock Lake and