I am having trouble with Blogger and wonder if the original Pilanesberg post is too big. So I have cut it into two parts hoping that the text and photos can live together in harmony rather than trying to push each other off the page. 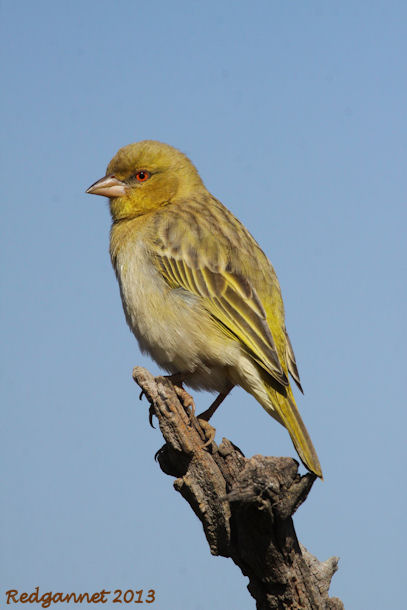 This is Part 2.
Part 1 can be found at this link and contains the bits about the close encounter with White Rhinos and a visit to the hide at Mankwe Dam. 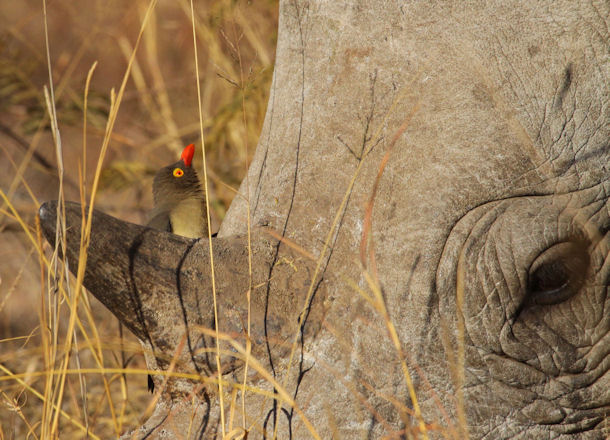 I had enjoyed a glorious couple of hours at the hide at Mankwe Dam before reluctantly moving on to the Pilanesberg Centre. There is a restaurant and gift shop at the old colonial building in the centre of the park. A salt lick and a small waterhole make this an attractive spot for animals to call in too. This morning the air was filled with dust from an active Wildebeeste herd. 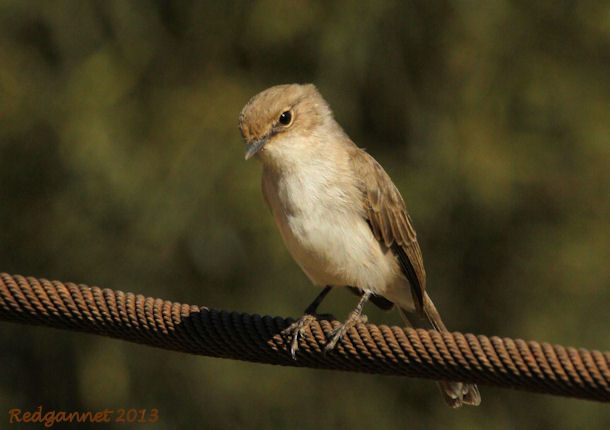 A strong fence is designed to keep the Elephants from getting too close and damaging  the building or perhaps a diner. It makes a good perch for many birds including the Marico Flycatchers which were making the most of the flies often to be found in the proximity of Wildebeeste. 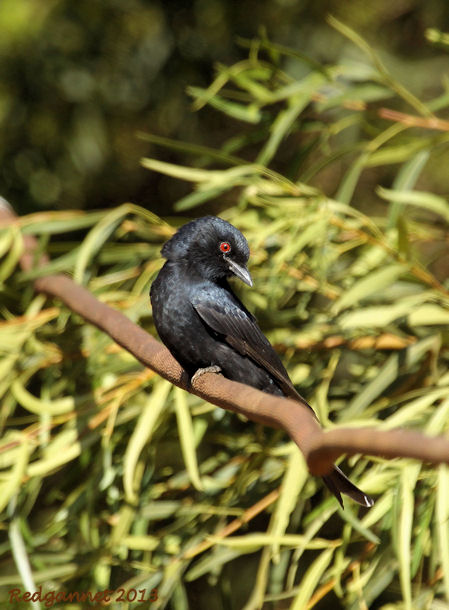 Fork-tailed Drongos and Yellow-billed Hornbills also found the cable to be a fine place to perch for a while. 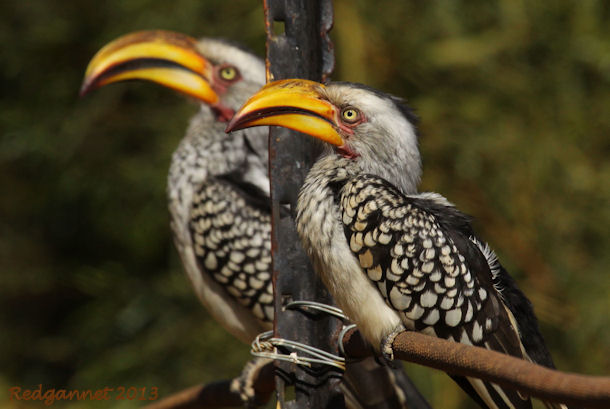 Out on the short grass and dust in front of the verandah, Kalahari Scrub-robins shared space with Sabota Larks. 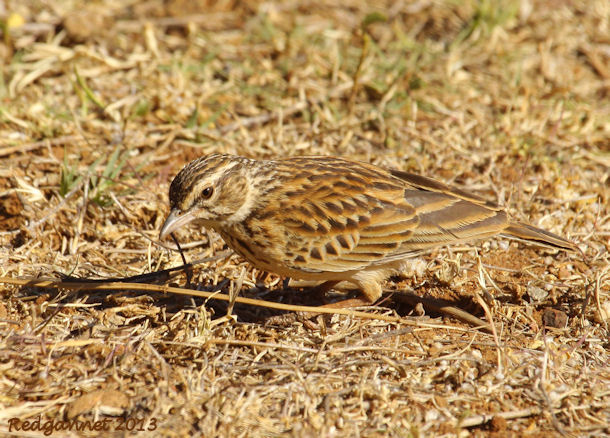 Red-faced Mouse-birds kept watch from a low acacia bush as Giraffes approached from the distance. 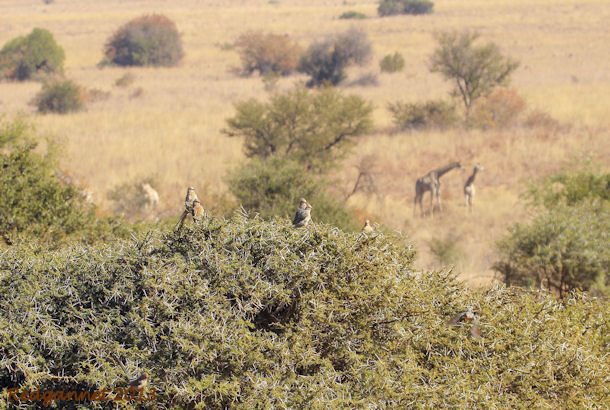 From mid-morning, the excitement slowed a little. A highlight was a bone-sucking Giraffe. Was this an attempt to increase its calcium intake *(see below)? Porcupines need a lot of calcium to produce their spines and are known to gnaw bones to get it. A second giraffe was salivating spectacularly and appeared not to be able to close its mouth. I suspected that it was also chewing a bone and was concerned that I might have to step in with the Heimlich manoeuvre at any moment. 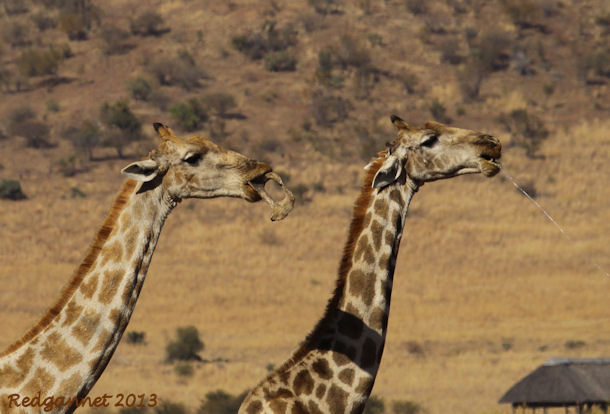 *Nicely hedged huh? if in doubt ask, a rhetorical question that no-one knows the answer to.
After a few minutes on the internet it became clear that the answer was not as obvious as one might think. Many people went with Calcium deficiency, but a few insisted that the giraffes were in search of Phosphorus.
Giraffes need the two elements to build their unique skeleton. It is especially important for young giraffe as they grow, but there is also a daily requirement that must be fulfilled. The Calcium needs can be mostly achieved through browsing, but it is unclear where the giraffes find enough Phosphorus to maintain the required levels. Osteophagia was assumed to be the answer, until....

"Can Osteophagia provide Giraffes with Calcium and Phosphorus?" - A study by Bredin Skinner and Mitchell, 2008.

In their study, Bredin, Skinner and Mitchell assessed how much Calcium and Phosphorus could likely be obtained by sucking and ingesting bones. They concluded that the amount of minerals that may be digested into the system was negligible. So I ask the question again, "why were they sucking bones?

A Springbok stood for pictures along the northern shore of the dam. 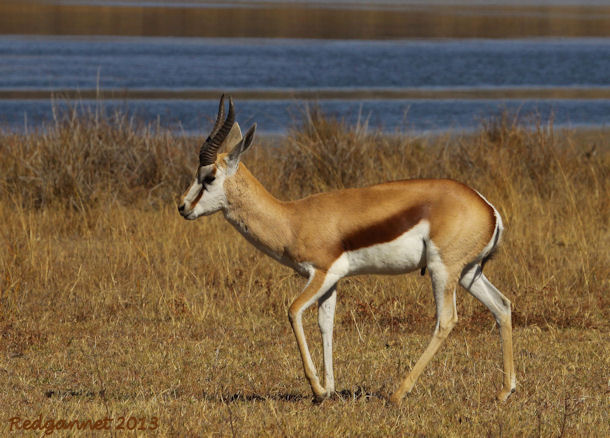 It is winter in South Africa at the moment, but the day still reached a respectable 20C. The nights are chilly, but the warmth of midday was enough to encourage the animals to seek a little shade and a few moments rest. I passed around the northeastern part of the park and was returning towards Mankwe Dam along the main road from Manyara Gate. 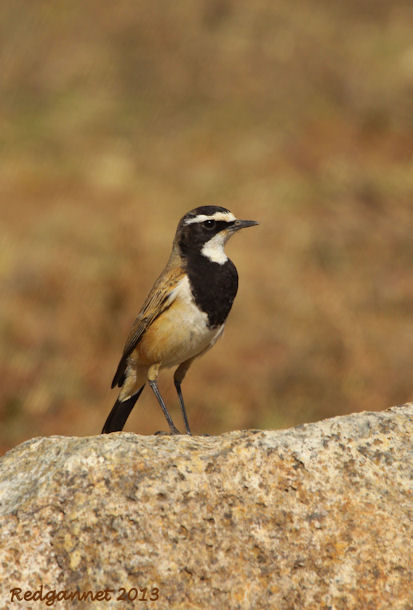 Capped Wheatear
A Black-tipped Mongoose crossed the road. Since I was introduced to the superstition in India, I have held that a mongoose sighting will bring good luck. A second mongoose a few moments later promised an exciting afternoon, if you believe that kind of thing.
I wanted to follow the winding road that passes through some likely looking kopjes; great Leopard habitat. It was still early afternoon and the chances of finding Leopards at this time of day were slim, but I was hoping that my mongooses might swing things in my favour.
I scoured the kopjes around the first two bends and was almost put off at the third when the road became very rough and I wondered if it would be passable. 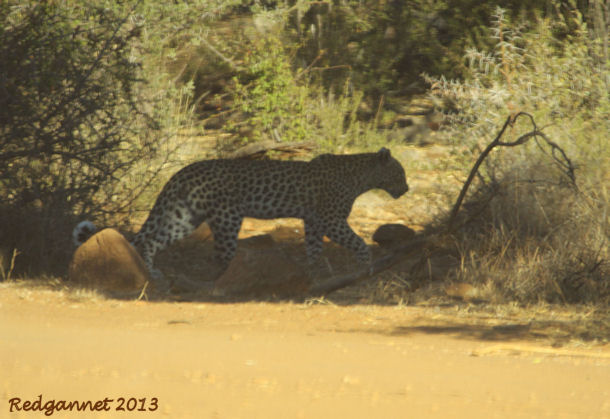 With a bit of a run-up, I made it up the slope just as the Leopard stepped off the road on the next curve. I was thrown into a quandary. Should I stop and watch, or drive closer and risk spooking it? I took a rotten shot through the windscreen as it moved across the corner and headed out of sight.

It took a cursory look over its shoulder as I caught up, then crossed a tiny patch of sunlight before melting into the bushes and rocks of the kopje. 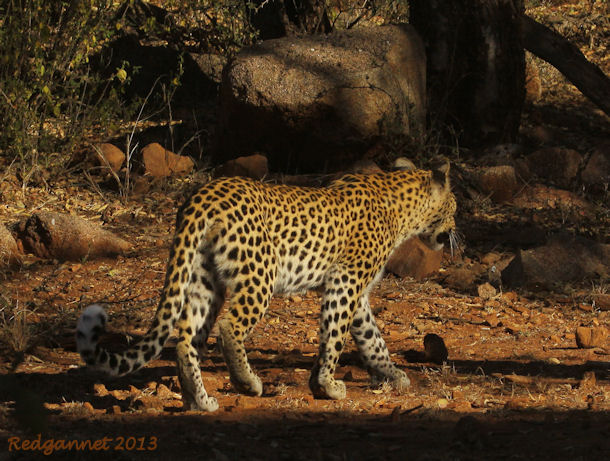 Suddenly the road condition was unimportant and I quickly reversed. The rutted, winding road doubled back on itself and I hoped to see the cat again as it came out of the kopje on the other side. I waited quietly for ages and checked the dust in the road for prints. Nothing. I was the only car to have passed this way for about 30 minutes, so her tracks would have been obvious in the deep dust. She must have decided that it was too early to be up and settled down in the shade of the rocks for a nap. 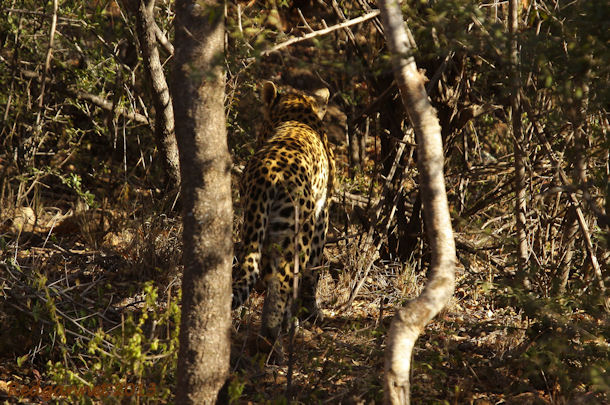 Timing is everything. On safari as well as when you are birding a moment taken here or there can put you in the right place at the right time through no skill or knowledge on your part, just luck.
Was a Leopard worth 2 mongooses, or did I still have one to use up?


If I had not stayed for a while hoping to see the cat again I would have sailed past Sheena and her tiny baby before they came into sight over a rise. The herd of Elephants were feeding on their way to the dam. The large female with the radio collar is known as Sheena and her baby had been born just one week earlier. 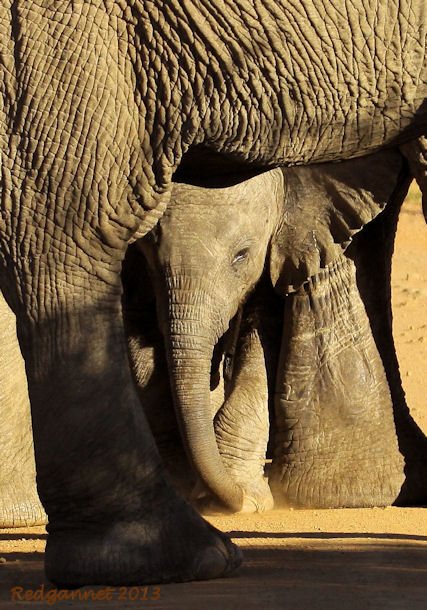 It looked very confident for such a young age and played excitedly with the other calves. His mother appeared very relaxed and they nonchalantly passed my car within a tail’s swish. 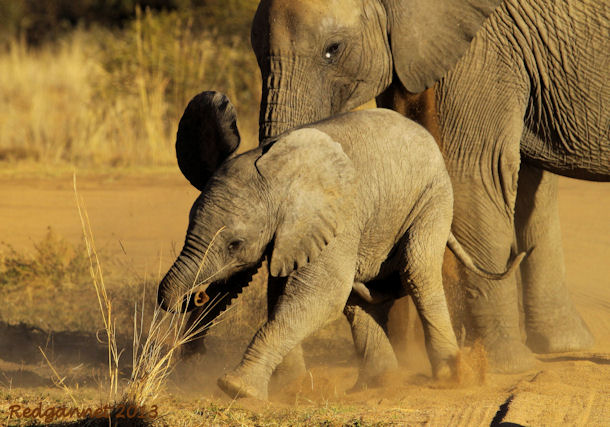 While the older calves used their trunks to throw dust over their backs, the tiny one had not yet mastered control of his trunk and was unable to follow their example. Instead, he launched himself into the drift of dust at the side of the road and wriggled. That was worth his weight in mongooses. 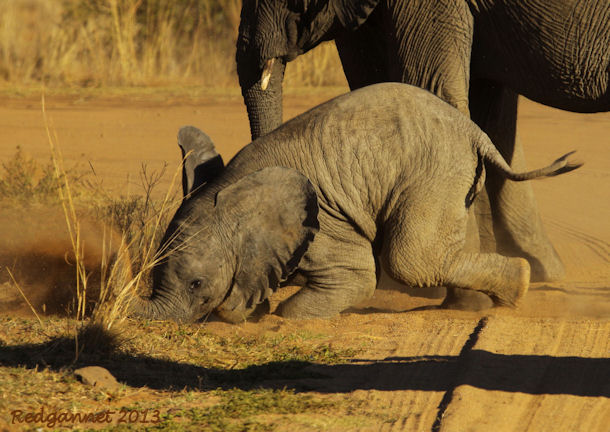 A researcher arrived and told me the family history and pointed out various members of the herd. 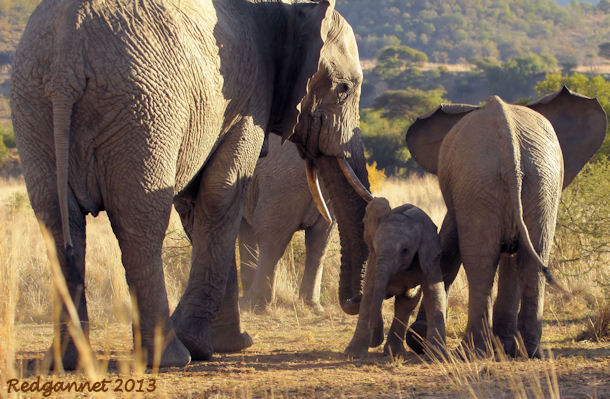 The rest of the evening could not live up to the afternoon, except for watching from the Eagle’s Nest picnic site (on the hillside at Google Earth ref; 25 16 10.92S 27 7 35.85E) as the elephants continued towards the dam, meeting up with a few more as they went. 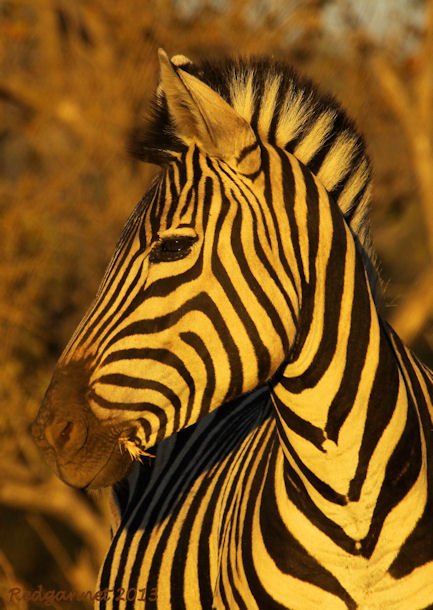 Some Zebras became very bold as the sun sank behind the hilltops in the west and the light began to fade.


It was dark by the time I reached the Bakubung Gate again at 18.00. It was only then that I realised that I had not ventured to the west of the road at all. The whole day had been to the east and I had not even covered half of the park. 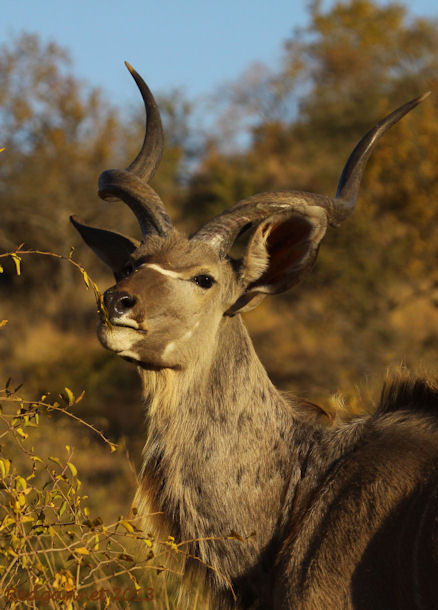 For previous posts from Pilanesberg, follow the links below;