The approach to Grootvadersbosch National Park is a view amongst views. In an area of stunning scenery the vista from the crest of the road is outstanding.

I was on the way to the forested area beyond Swellendam and had to stop to absorb the beauty of the landscape. This turned out to be fortunate as otherwise, I would have missed the Denham's Bustard strutting through the field across the road. 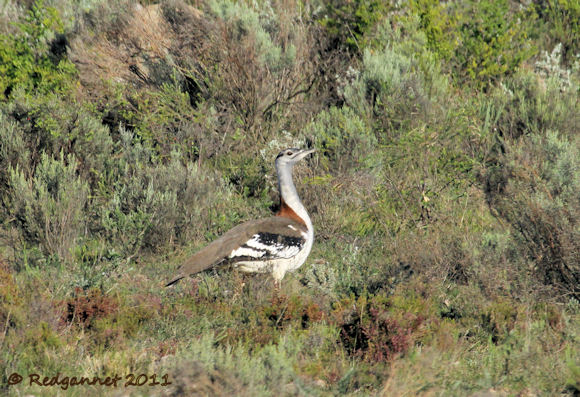 I was able to get an hour in the forest before the sun went down and I retired to my cottage which had been booked nearby. The night was cold and the mist rolled in again, but I was snug enough with the fire going. During the quick visit in the evening, I had only just reached the edge of the forest when a soft tapping and a high pitched seeeeeeet caught my ear. An Olive Woodpecker was feeding on the first tree and a Grey Cuckoo-shrike flushed from the next one along. A short walk into the trees found a rustic hide built using the slope of the valley and looking out across the canopy. Not much was seen from here but Cape White-eye, Olive Thrush and Cape Batis were found easily in the forest. 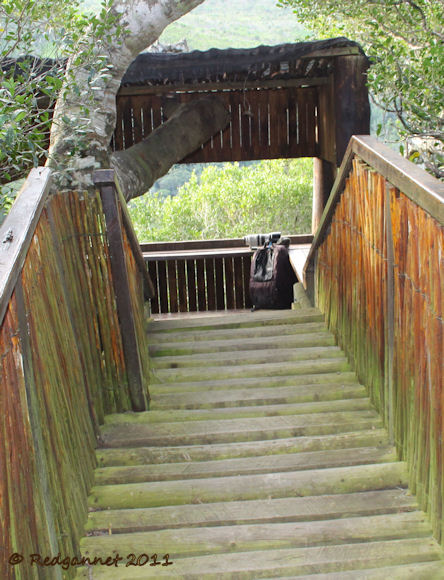 Early the next morning, the mist was thick and some extravagant calls caught my ear from a stand of eucalyptus. At times like this I really envy birders who can identify birds through their vocalisations and don’t have to wait for the cloud to lift. The odd calls, it turned out, were made by Cape Crows, but I had to wait for a gap in the fog to get an eyeball on them. 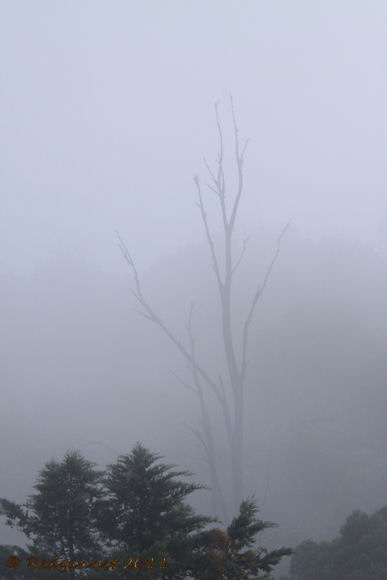 The mountains create lots of micro-climates as we have already seen this week (Cape Town and Somerset West, on the lowlands near the ocean, were clear and bright for the whole visit), but I was not ready for the immediate change between the forest edges and the interior. I had held back until the light had improved before leaving the farm and venturing onto the mountain roads in the fog, but found that as soon as I entered the forest, the visibility was as clear as a bell. Possibly there is a phenomenon that maintains warmth in closed canopy forests and keeps the condensation from forming in the forest interior. 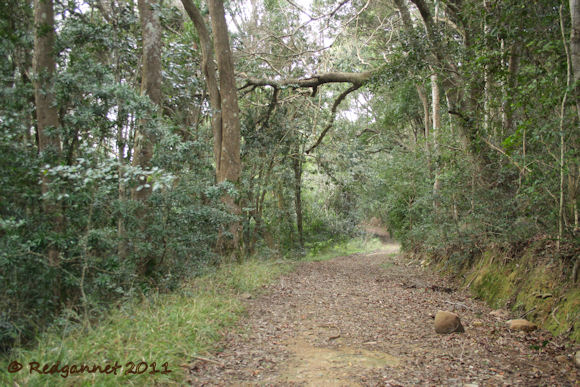 From the canopy hide, visibility was reduced to just a few feet as clouds, brought up from the valley, floated by on a slight breeze. From the foot of the hide, there was no sign at all of fog and I could see as far as the trees or the path would allow.
Cape White-eyes and Cape Batis were common again this morning, but the hoped for Narina’s Trogon, Knysna Woodpecker and Knysna Warbler could not be found. A troop of Baboons trailed parallel to the path as if keeping an eye on the stranger in the forest. Grootvadersbosch (Grandfather’s wood) was quiet apart from the few parties of birds that I encountered. One such party was made up of Terrestrial Brownbul, Sombre Bulbul, Olive Woodpecker and Fork-tailed Drongos. 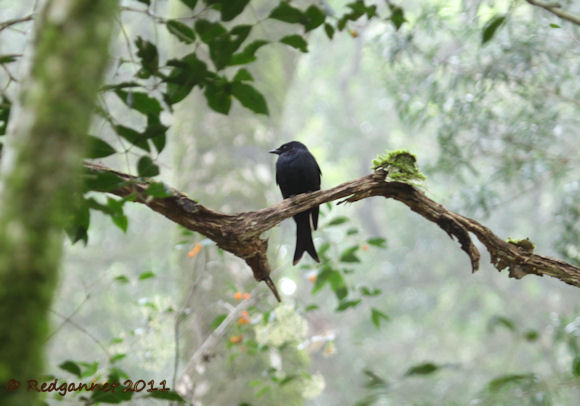 Another bird viewing hide caused me some embarrassment and I was pleased that nobody was around to witness my clumsiness. The hide is built as if for slim children to play in. Instead of steps to climb to the top, there are ladders with narrow openings to each level which are clearly not designed for the fuller figure. Imagine trying to climb a steep ladder into your attic with a rucksack on and carrying a tripod with a big camera mounted on it. This will give you some idea of the frantic wriggling and squeezing involved (Tip for next time, make two or more journeys).The mental picture you may have built up would only be fully complete if you have baboons that poo in your loft and habitually leave their droppings on the ladder rungs and around the access holes. 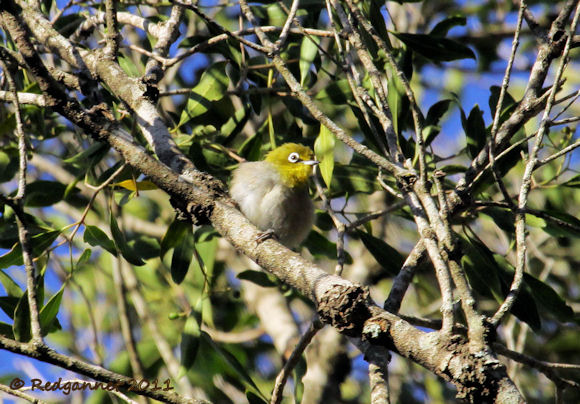 Having managed to get in, I stopped for a while waiting for a party of birds to pass. After a while a good sized feeding group passed through consisting of Cape White-eye, Cape Batis, Yellow-throated Wood Warbler and some Olive Thrush. Reluctant to put myself through the assault course to get down from the hide, but now seriously pressed for time, I took my leave of the forest to head home. I had only covered a very small part of it and felt as if I had cheated myself of the experience of a beautiful mountain forest and the birds that it held. On a subsequent visit, I may explore the forest first then concentrate on the lowlands on the next morning, ie do the same trip back to front. By the park gates, the office and the camp-site attracted Greater Double-collared Sunbirds, Forest Canary and Fiscal Flycatcher. 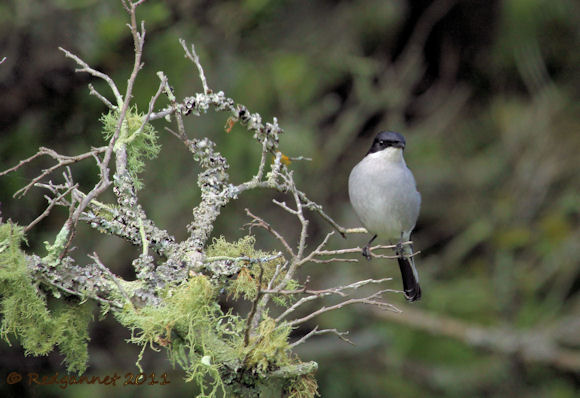 From Cape Town follow the N2 eastwards through Sir Lowry’s Pass. Pass Caledon and Riviersonderend to Swellendam 165kms beyond the pass. On the eastern outskirts of Swellendam is a turn-off on the right for the Bontebok National Park entrance ( Google Earth ref; 34 01’ 24”S 20 27’ 55”E ). 8kms beyond this turn-off, still on the N2, is the BP garage and the turn-off for the road to Malgas. For Grootvadersbosch National Park continue past the Malgas turn-off and take the next left 1.5kms further on (Google Earth ref;
34 02’ 18”S 20 32’ 47”E). It is the R324, signposted to Suurbraak and Barrydale. 26 kilometers along this road take the left fork, then left again after 1.5 kms. This is the area in which the Stanley’s Bustard was seen. After a further 1.25kms take the left fork and Grootvadersbosch is at the end of this road. Accommodation at Honeywood Farm (Google Earth ref; 34 00’ 17”S 20 49’ 54”E check position manually) will be passed on this road, 1 km before the park gates which open between 08.00 and 18.00.