During a trip to Washington DC, we stay at a hotel in Tyson's Corner, McClean Fairfax County, Va. A layover here would usually involve a walk around the local area which contains office blocks separated by wooded plots. The birding here can often be rewarding, but I was picked up by the police last time I tried. 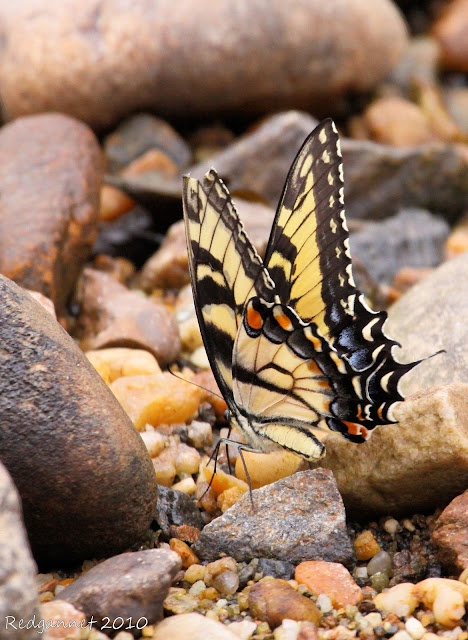 OK, so I was in my camouflage gear, creeping furtively through the woods between the offices with my binoculars and a big paparazzi-style camera. How was I to know that these were government buildings? If I had known I might have thought twice about wearing the balaclava (it was very cold). Three squad cars and seven officers attended the scene. Two pulled their guns when I reached into my jacket to produce my hotel room key to prove that I was staying close by.
At Raglan Road Park, there was none of this excitement, although I did get a funny look from an elderly gent when I inadvertently found myself in his backyard. 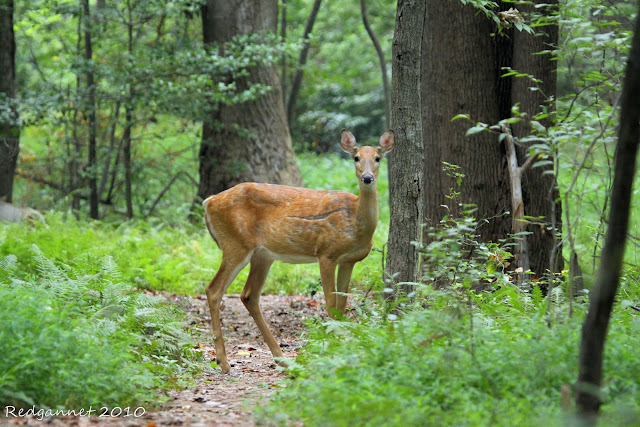 I found Ragland Road Park as a green smudge on the map and had no idea what to expect when I set out. It is an easy 5 minute, one and a half kilometre, minute ride from The Crowne Plaza Hotel at Tysons Corner, in a shallow valley with a small stream running through it. Access is via a path at the end of Tyspring St. (Google Earth ref; 38 55' 24"N 77 14' 27"W). 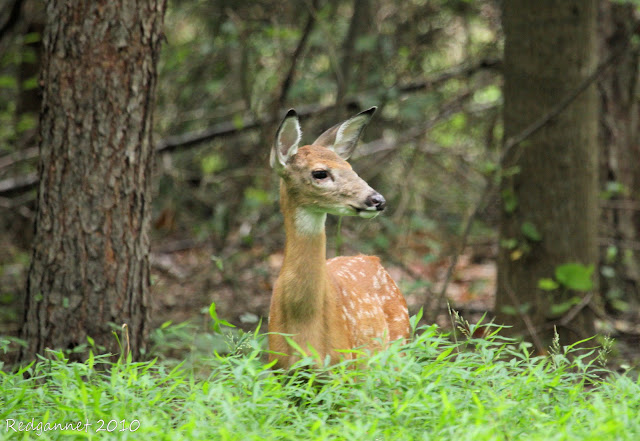 The thick canopy made it very gloomy inside the deciduous wood. A White-tailed Deer stepped out onto the path ahead and stood stock-still, checking me out, while I got the camera attached to the tripod and prepared for the first shot of the day. She was accompanied by a young, spotted fawn and I was surprised at how close she allowed me to approach. 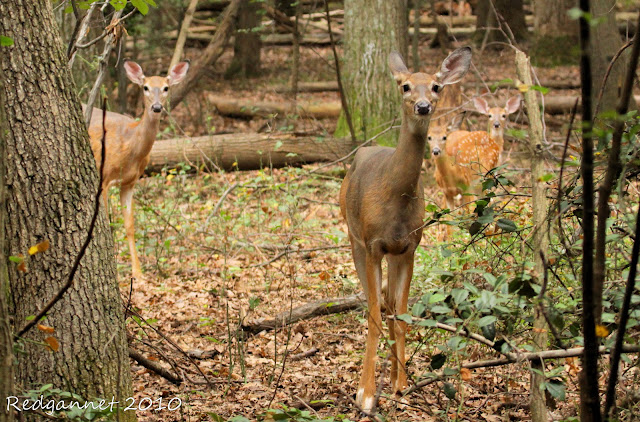 A little further along, another group of deer was browsing in a dappled glade (how come glades are always dappled?). They continued to feed even though the path passed within 10 meters of them. The adult females had a darker coat with whisps of the fawny brown hair on their flanks. I wonder if they are shedding into a darker winter coat? 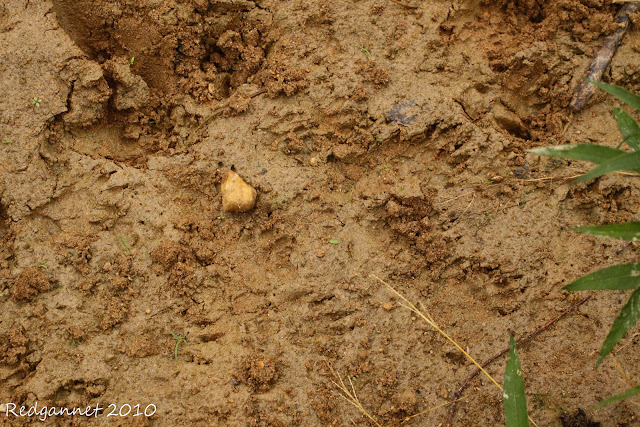 Soon I came to the stream. It is rocky in places, but a muddy bank showed signs of Racoon activity. The path either went into a residential road, or by skipping the stream, into the back lots of some offices. There was a narrow margin of trees between the car park and the stream. As I walked along, I flushed a large brown bird which flew silently away and out of sight. I felt sure that it was an owl and tried to predict its trajectory to judge where it might have come to rest.
For the next forty minutes or so, I scoured the search-zone, then retreated and approached from another direction. I crossed the stream on precariously placed rocks and found another angle to search from. In the distance a Blue Jay was calling hysterically. It was beyond the search zone, so I ignored it for the moment. 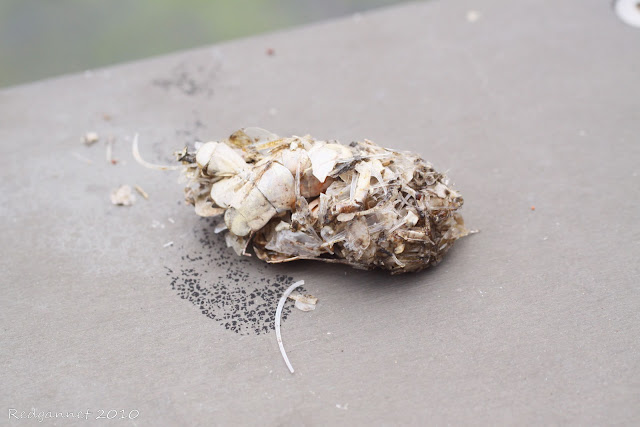 By a small ornamental pond, I found what looked like an owl pellet. It was on top of a light post (regurgitated there or found and placed, I do not know) and contained a lot of beetle casings, crustacian shell fragments, fish (could they be frog?) scales and thin rib bones. This might suggest a diet for an Eastern Screech Owl, but my elusive owl had been much bigger.
I was distracted by the outfall from the pond by a variable Dancer. 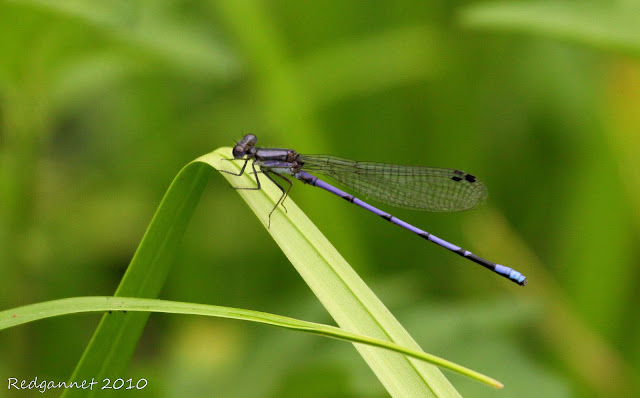 There had been no sign of the owl, but there is a lot of dead wood and it could easily have found somewhere to hide. A crow had now joined the jay and both were calling strongly a little way off, so I decided that it might be worth a try. As it turned out, it was not an hysterical jay, but a Red-shouldered Hawk that flew off as soon as it saw me. I reckon that it was the hawk that I flushed earlier and mistook it for an owl, although the bars on the hawk’s tail are very obvious inflight. I wonder how I might have missed them? The birding had been very slow today and the owl would have added a bit of glamour to an otherwise unimpressive list. A more practiced ear than mine may have noted the difference between the hawk and the jay’s calls, but after playing back my Peterson’s tapes, I still would not care to put money on it.
Beyond the ornamental pond and nursery school the path had a tarmac surface. Someone had tried to install a trim track, but it had been washed away. Apart from that and a couple of picnic tables for local smokers, the wood seemed unmanaged. There was a lot of dead wood and it was riddled with woodpecker activity. 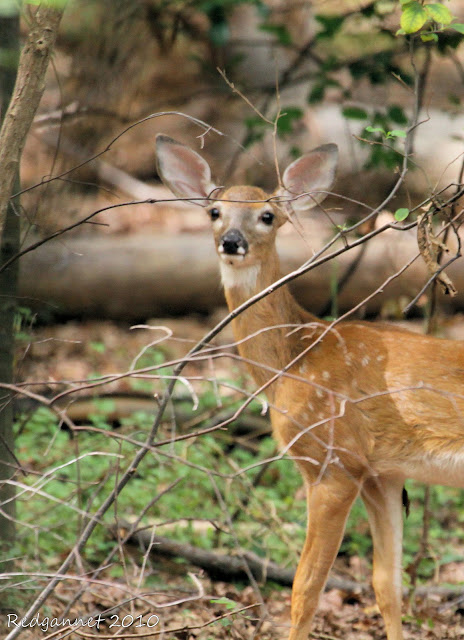 On my return, I encountered the deer again, close to the path.
As a bird watching exercise, my visit to Raglan Road Park was very unproductive with only 5 species seen and none photographed. But as a relaxing walk it was very pleasant and being able to get so close to the deer was a real treat. I suspect that the woods may have more to offer and will try them again. 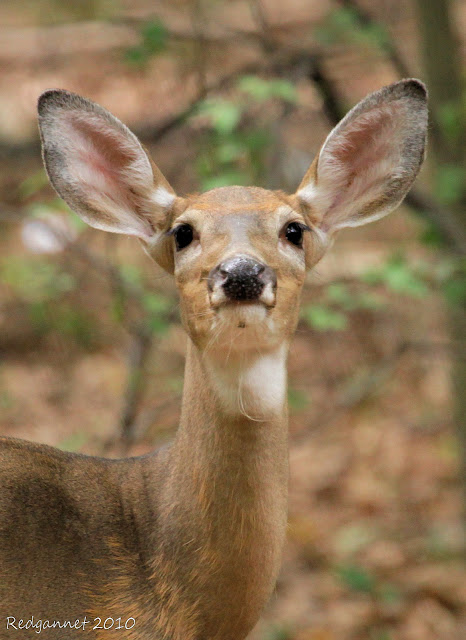 Hurricane Earl was due to pass through today. It was downgraded last night to a storm, category 2 and grazed the coast about 200 miles away.

Visit the dedicated USA and Canada page for other posts from the region
Raglan's Wood, Tyson's Corner, IAD, USA
Posted by Redgannet at 07:00